After his "heart on the sleeve" open letter paragraphs about the road works' impact on Mertrobus M3, James Freeman (boss-man of First Bus in the west country) turns to problems with another of these high profile services.

Turn now to the m1 metrobus, which is the major south to north cross-conurbation route that celebrated its first birthday this week. 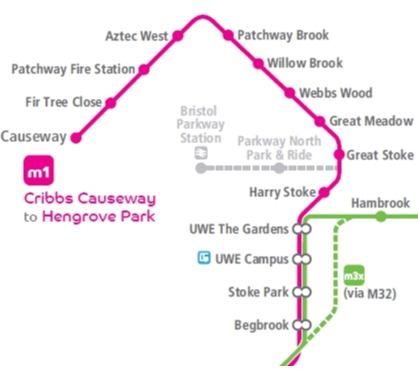 All three Metrobus have had frequency chops from the new year, including the M1, but at peak the route from Cribbs Causeway into the city via Bradley and other Stokes has an enhanced headway.

We introduced a carefully-planned change to the peak-time timetable last Monday. This was designed to re-assign some capacity to cope with the extra people that we have attracted to metrobus in the Bradley Stoke and Stoke Gifford areas. 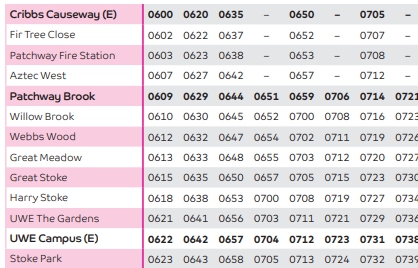 The new arrangement provides a 7/8 minute peak time frequency between Bradley Stoke and the city centre – increasing the number of seats per hour from 450 to 600 over this section.

This roundabout is frighteningly close to M3 cloggage-creator at Hambrook traffic lights. 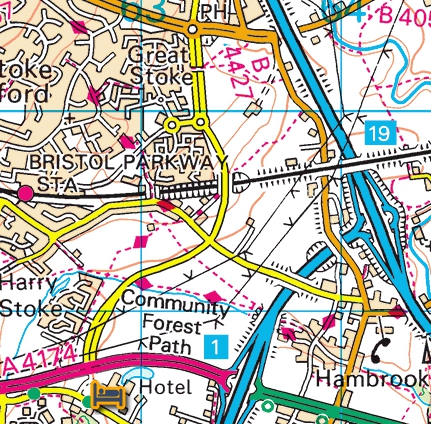 The Hambrook happening is bottom right at the junction of the A4174 (GREEN) and the Old Gloucester Road (BROWN). Top centre is the junction referred to in this section of Mr Freeman's anguished epistle. 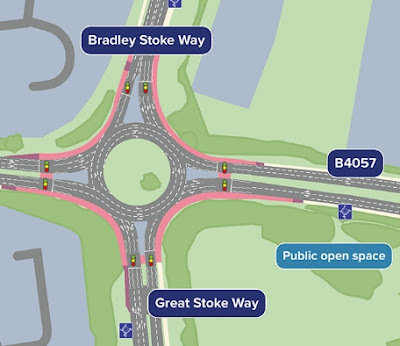 In summary, the work is to increase the number of lanes on the roundabout approach from two to three, to install light controlled pedestrian crossings and to improve routes for cyclists. This work will, apparently, take 12 months.

The resulting congestion has delayed buses by up to 40 minutes on each journey at the key morning peak times. This has totally disrupted the rest of the service straight through the morning, all the way to the very south of the city.

Correspondent Paul, who lives nearby, explains some the problems for the M1 which crosses the junction from north to south and vice versa. Paul writes:-

A real issue has been that the southbound bus lane approaching the roundabout has been closed as it is now the contractors' car park ... 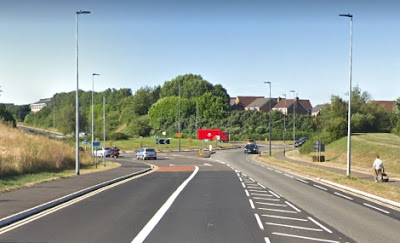 ... and they have not been opening both lanes approaching the roundabout ... 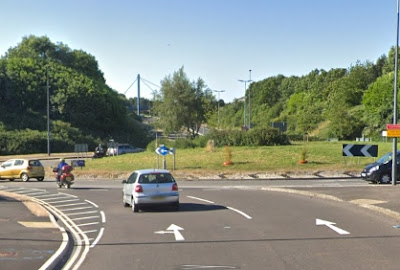 ... until mid-afternoon, yet the busiest time of day is the morning peak. This morning, the second lane was open in the peak; wonder if that was anything to do with the publicity!)?

Paul has a very personal interest in these delays as he explains.

My daughter's school bus has been leaving its starting point on time, and arriving at ours anything between 30-40 minutes late (on a journey through Bradley Stoke that should take 30 minutes to reach here) - today it was "just" 10 minutes late.

Two ways of helping traffic flow then become apparent. Remove contractors vehicles from the bus lane AND ensure that at least two lanes of traffic can access the roundabout at peak times. Planners and traffic engineers please note!

But the problems don't just bog up things and Bradley Stoke, as James Freeman explains, woefully.

So not only did this mean that the many people who have adapted their lives to picking up the bus at Begbrook near the new bridge over the M32 ... 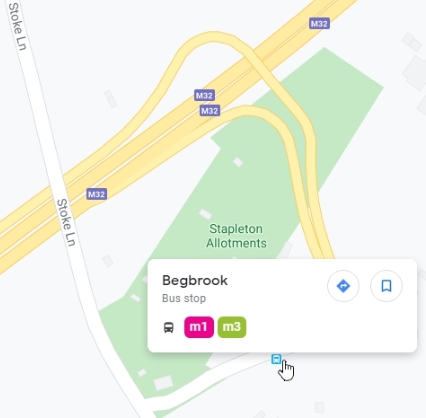 ... but even worse it meant that buses didn’t turn up on time at stops all across the route in south Bristol. 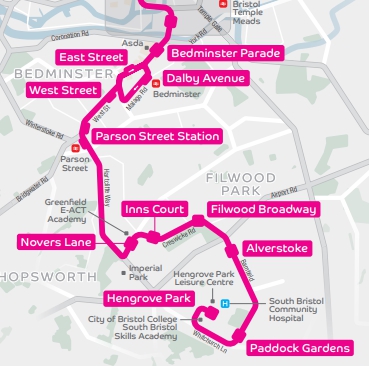 For these people, the delays and disruption are completely inexplicable to them. You can forgive them for thinking we’re useless.

Of course, when the buses have been turning up at Begbrook, they are so delayed that they have picked up extra people and are therefore unable to collect any of the people waiting. The m3 buses, similarly if not worse delayed on the A4174, are also full when they reach this point. Small wonder then, that social media was full of angry entries last week – the one that caught my eye was from a customer who waited more than an hour to get onto any bus – long gaps being followed successive fully-loaded buses. No wonder these people were angry!

From last Thursday we have been able to mobilise extra buses to operate additionally to deal with some of these problems (luckily, we have some new deliveries not yet deployed and managers who are willing to drive on short notice), but this is a sticking-plaster approach and very expensive as well.

£230 million of public money was spent on creating metrobus, on top of which the operators have invested £10.5m on top-of-the-range buses. It’s largely wasted if we can’t run the service properly or at all. Not only that, if our much-vaunted metrobus system, by which so much store has been set, is not to be entirely discredited as an alternative to driving cars, then somehow the way has to be found to make these metrobuses able to run through these areas of increasingly chronic congestion.

In the meantime, we must offer our riders, not just on metrobus but on the many other routes that are affected, especially from Thornbury and Bradley Stoke, Yate and Emersons Green, a most sincere and heartfelt apology if you have been affected this week. My fear is that, despite our attempts at mitigation, these problems will repeat next week and the week after and on until half term!

And there is another set of major road works waiting in the wings. 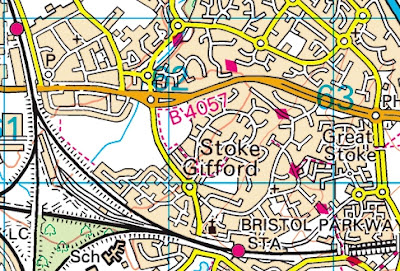 Gypsy Patch Lane is a continuation westbound of the B4057 (BROWN) which is part of the curse of the M1 roundabout (centre right). The road passes under the main railway from Bristol Parkway to the Severn Tunnel and on to Cardiff.

Starting soon, the railway bridge is to be completely replaced. 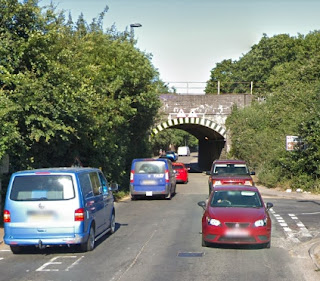 Aha! To provide a viable route for an extension of the metrobus network to run via Parkway Station (map lower right) and on to Cribbs Causeway (map top left).

Whilst this work will only take 8 months and will not affect public transport, it is a total closure and more traffic will consequently be using other routes, leading to an increase in general cloggage in the area.

So there is every chance thing could get worse for James Freeman's buses unless action is taken NOW to provide some relief.

Incidentally, the new metrobus route will cross the former Filton Airfield runway from where the UK's Concorde took its maiden flight ...
... yikes!, nearly 51 years ago!