Don't panic. Don't cheer! (opinions available according to political hue). But over the last couple of years we have seen, effectively, the end of the "New Bus For London" (a k a Borismaster). 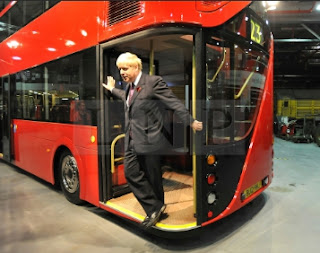 One journo took a ride on the first day. 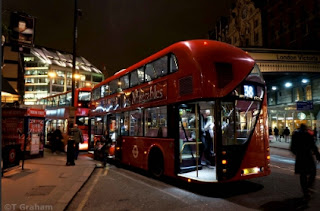 He was enthusiastic about the ability to hop on and hop off between stops! 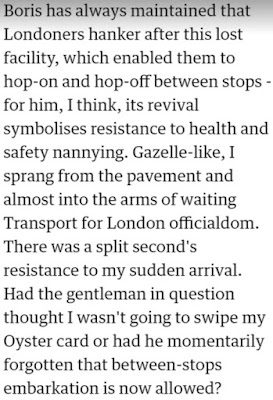 Safety was maintained by having a "conductor" who stood in the traditional back platform position to watch over the gazelles (actually looking bored out of his/her mind). Then many of the conductors were removed as an expense too far. 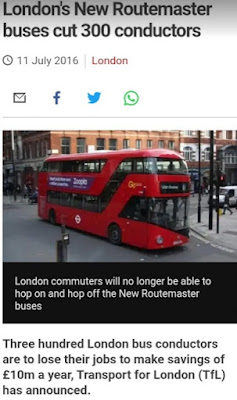 Now the latest "retreat" from Boris-mania is beginning. 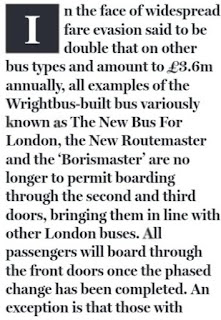 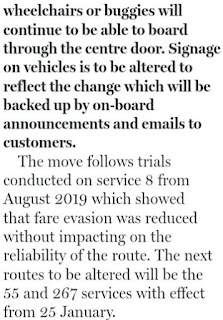 Would the project have worked better and with less fare evasion had the "conductor" collected fares? No, that would have been too revolutionary a novelty - sure;y it could never work. 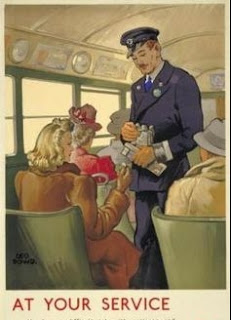 A Borismaster thus becomes nothing more than a thoroughly normal London bus. Operators never liked them or wanted them. Despite the misplaced vision that other cities would welcome them with open arms as here in Leeds ... 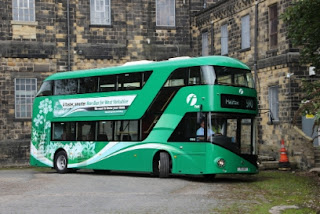 The bus industry is floundering under the deregulated "commercial" model; politicians seem unable to come up with anything better unless loadsamoney can be found. Arriva is NOT being sold, Stagecoach is rebranding itself and First Bus seems unable to have any vision for its own future.

What IS the answer?

Saturday Snooker Shock?
For a little relaxation, fbb is wont to watch a bit of snooker on the telly. Today is the final of The Masters, probably the second most prestigious tournament in the season. Yesterday afternoon's semi-final was a huge shock. Ali Carter, in the competition because Ronnie O'Sullivan decided not to play, was battling against ... 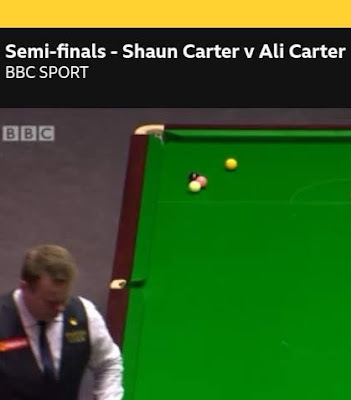 ... the completely unknown Shaun Carter; unknown because he doesn't exist! Carter's opponent (who lost) was Shaun Murphy. With fbb's propensity for triping erroz, it is good to know that the mighty Beeb is far from perfect.

Creating Desire?
The Darjeeling Himalayan Railway, also known the Toy Train, is a 2 ft gauge railway that runs between New Jalpaiguri and Darjeeling in the Indian state of West Bengal.

It climbs from about 100 m (328 ft) above sea level at New Jalpaiguri to about 2,200 m (7,218 ft) at Darjeeling, using six zig zags and five loops to gain altitude. Six diesel locomotives handle most of the scheduled service, with daily tourist trains from Darjeeling to Ghum – India's highest railway station – and the steam-hauled Red Panda service from Darjeeling to Kurseong. Steam-enthusiast specials are hauled by vintage British-built B-Class steam locomotives. 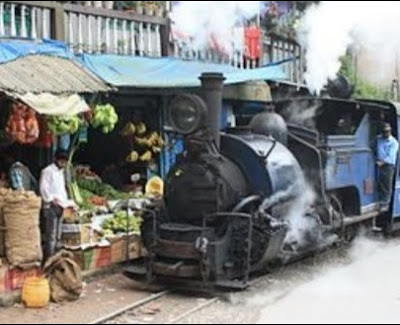 Tim Dunn twits a remarkable set of pictures from 1942 whereby the railway fitted streamlining to one of the above saddle tank loco. 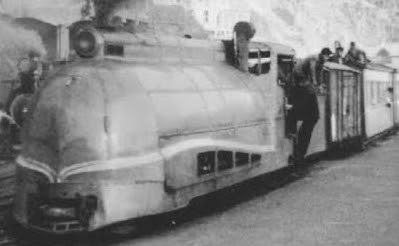 The line's maximum speed is in the region of 15 mph - on a good day! 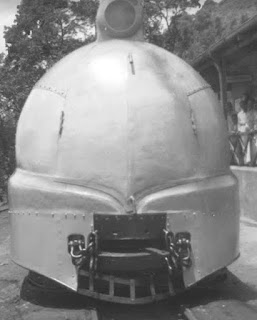 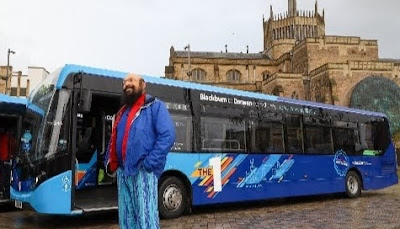 ... creating desire for Transdev Blackburn Transport's route 1 to Darwen and Bolton. Is the style of diagonal geometric "splodges" to become the latest craze in bus livery from the maestro.A similar idea appears (from a different source?) on the fist livery attempt for Go North West, the GoAhead operation that was formerly First Bus Manchester Depot network. 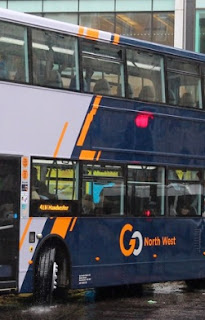 GoAhead are already into their second new livery ... 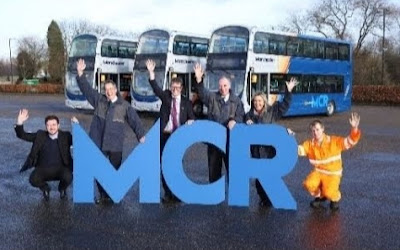 ... blue with block MCR and less diagonals. A variant without MCR but with a coloured "wedge" is featured on the brand for routes 52 and 53 ... 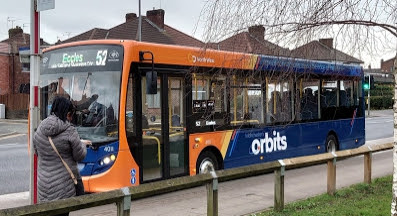 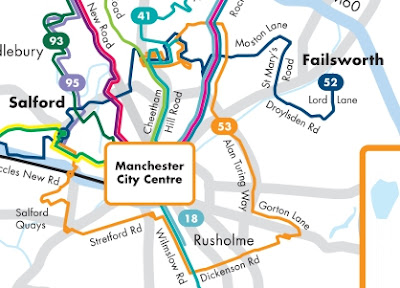 There's a clue in the brand name, see.

Whether co-incidentally or not, the livery picks up the orange and dark blue colours from the network map. Maybe, maybe not. Orange and blue seem to be the theme for GoNorthWest. 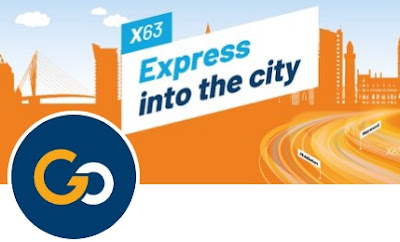 Back in Blackburn, "The1" is a total PR package with advertorial material in support of the brand. The diagonals become multi coloured angled shadows for the tag line ... 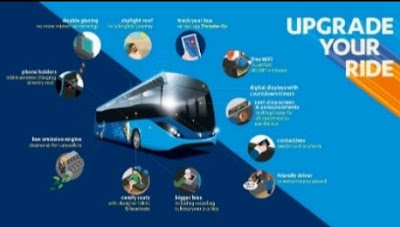 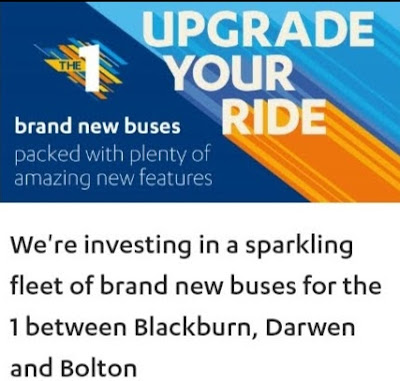 Amazing new features? What are they?

Numerology Nonsense
fbb notices that today's blog his 3,333rd posting! He must be slightly weird. Surely there is NOBODY who has read all 3,333?

Except fbb, of course.