James Freeman, boss of First in Bristol, has been forced to send his customers and open letter apologising for the poor performance of some of hiss high spec bus services.

Here we are at the start of a new decade and no more than a week into it we are confronting appalling disruption to our lives as a result of traffic congestion particularly in the northern fringe of the conurbation. While this affects many people, it particularly impacts people who have made the lifestyle choice to use public transport to travel, particularly to their work.

Last Monday we introduced a fleet of eight brand new bio-methane fuelled double-decker gas-buses, replacing diesel buses, on the m3 metrobus service between Emersons Green and the city centre. This is an investment of £2.4 million in the buses alone. 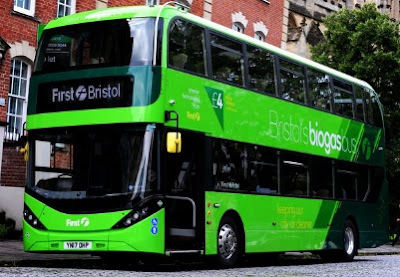 By Tuesday, these splendid new vehicles were utterly gummed up in appalling delays on the A4174 Ring Road. A journey that normally takes about 35 minutes was taking an hour and 35 minutes!

Not only is that frustrating for those on board, arriving at work late, in all probability, but it also means that the buses weren’t getting back to Emersons Green to operate their next trips. So, the bus to operate the 0815 departure from Emersons Green was actually only getting back there after 0900! Thus, the 0815 journey only ran when we found another bus and driver (over and above the eight that we bought).

Then the buses were actually proceeding so slowly that they were picking up more passengers at each stop, so that there was no space left for people wanting to board at places like Hambrook – those people finding themselves left behind.

Clearly something was happening on the A4174. So let fbb try to understand what was going on.

Here is the M3 route map. 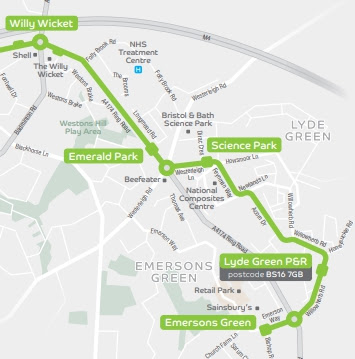 It starts from Emersons Green ... 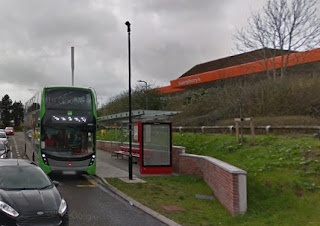 ... but not the same Emersons Green terminus as other routes. It then crosses the A4174, wiggles round Lyde Green (passing the Park and Ride site) and rejoins the A4174. 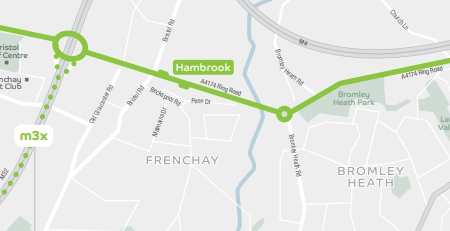 The crunch comes just after the Hambrook stop ... 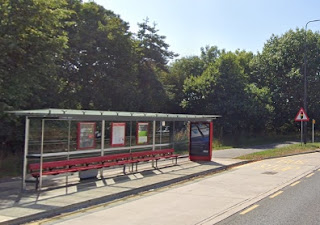 ... where the bus lane ends well before the traffic lights. 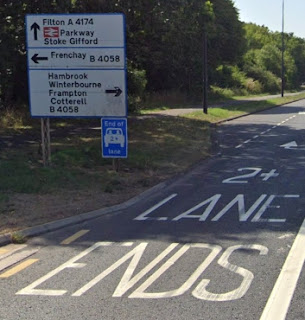 The approaching junction is, effectively, a crossroads controlled by a multiplicity lights. 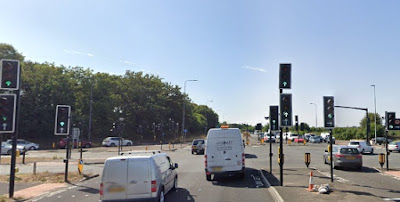 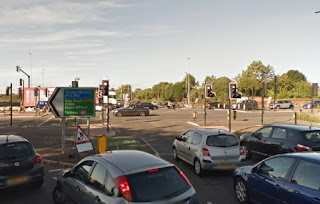 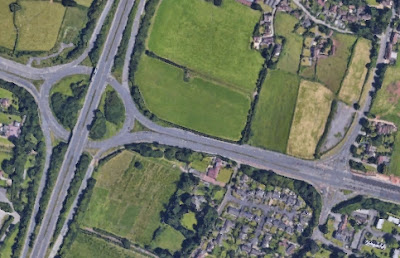 Now that should be fun at peak times. Bur, wait for it, this is only an experimental scheme to see if it is worth doing! It will be made permanent if it works. 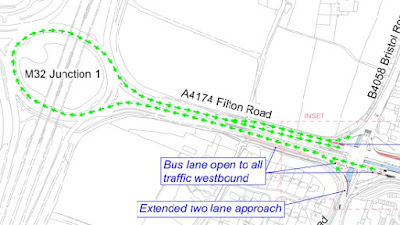 Note that the westbound bus lane across the junction (where it is badly needed) will be removed!

For completeness, please note that for traffic travelling eastbound, the right hand turn into the B4058 will still be allowed. 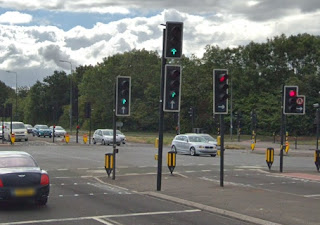 All this work is whats is causing the appalling disruption on the inbound M3. Even without this "improvement" work the inward peak run is challenging but the results of the disruption are clearly outlined by Mr Freeman.

One solution might be (might have been?) to prioritise an empty bus lane through the works at all times. Clever traffic engineers could, surely, come up with something better than 40 to 60 minute delays on a bus with a 45 minute running time. 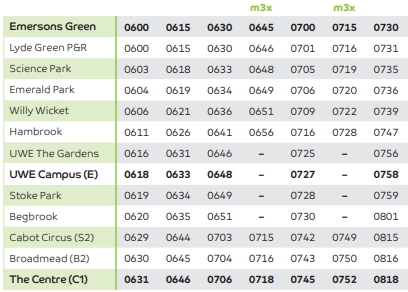 Remember that metrobus is a politically motivated scheme, offered to the worthy tax payers of Bristol because a tram would be too expensive.

Is there any alternative. fbb does not know, but, clearly the current situation is appalling. As James implies, having encouraged (successfully in part) people to abandon their cars and use these trendy new bus services, the authorities are now busy convincing passengers that they have made the wrong decision!

£230 million of public money was spent on creating metrobus, on top of which the operators have invested £10.5m on top-of-the-range buses. It’s largely wasted if we can’t run the service properly or at all. Not only that, if our much-vaunted metrobus system, by which so much store has been set, is not to be entirely discredited as an alternative to driving cars, then somehow the way has to be found to make these metrobuses able to run through these areas of increasingly chronic congestion.

Bristol correspondent Paul (who has provided fbb with much of this blog's content) also reports:- 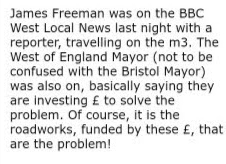 Confused by too many Mayors? The Bistol CITY Mayor is Marvin Rees ... 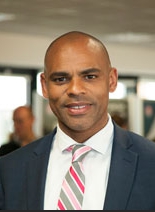 The West of England Mayor is Tim Bowles ...

... and he was directly elected by public vote and serves the whole of the Bristol and Bath "group" of local authority areas, which includes South Gloucestershire where the M3 mega mess is manifest!

And then there are the problems with the M1