The iconic Underground map has been in existence for a lifetime and it is recognised all over the world. Various attempts have been made to "improve" the diagram, mostly unsuccessful; but the more recent iteration to include the Elizabeth Line "bits" is making it very cluttered.

Including the Overground, all in orange, does not help, but the biggest failing is that the very frequent Thameslink route is not included, despite offering a better headway that some outer reaches of the tradition "tube". It's part of that nasty "National Rail" so mush be expunged.

But a clever chap has posted on-line one of the original designs of the Beck masterpiece but updated to show today's "pure" underground. 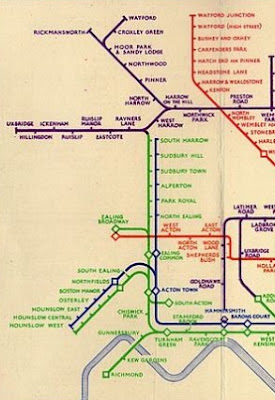 ... and its updated pastiche for comparison. Note the CentralLine to West Ruislip, the Piccadilly to Heathrow and the curtailment of the Bakerloo at Harrow and Wealdstone. 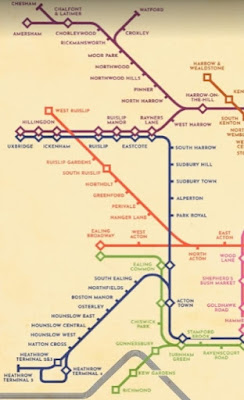 The Northern Heights extensions do not appear on the original Beck version ... 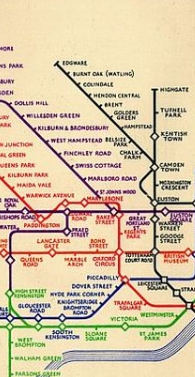 ... but the post WW2 partial extension of the Northern Line is now included plus the totally new (in 1968) Victoria Line. 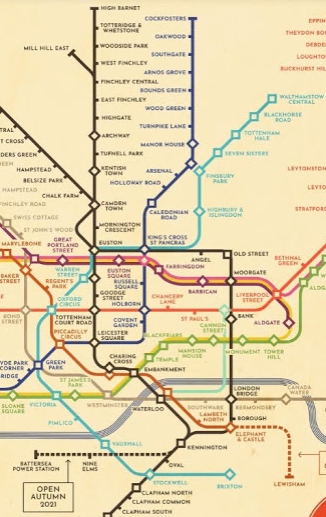 Note also the transforming of the Bakerloo Stanmore branch into today's Jubilee Line. And the opening date for the Northern Line to Battersea Power Station.

Beck struggled with the eastern end of the District Line as seen below ... 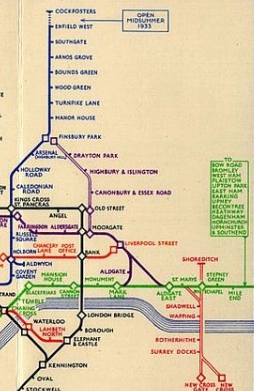 ... and Beck Mark 2 stretches the Jubilee to Stratford rather too much for comfort! Also note the dramatic extension of the Central Line to incorporate former LNER branches. 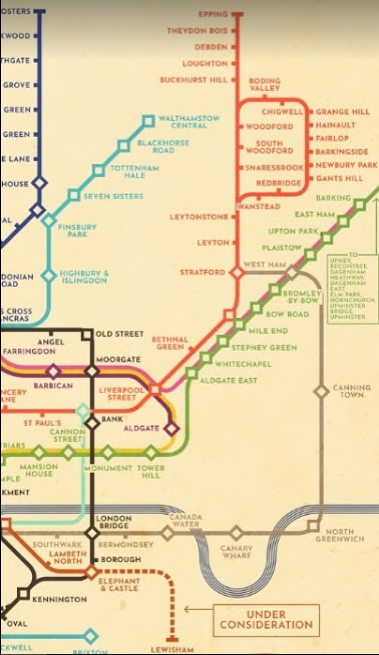 The extended Bakerloo to Leiwsham is shown, correctly, as "under consideration". Note also the Waterloo and City line absent for many a long year from the original "true underground" maps.

What is noteworthy, however, is the way in which the much extended Underground network can be accommodated in Becks original style and design. It is very much a tribute to his genius.

Atlantean Arrival Anticipated
We are all so used to the concept of a rear engined bus with a front entrance that we can easily forget how revolutionary a concept its was in the early days. fbb has never ridden on a a live Atlantean until he arrived with eager and academic anticipation at the University of Sheffield in 1963. This one had arrived in 1962. 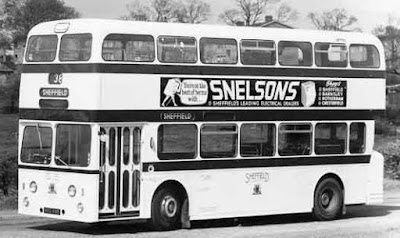 The first Atlantean demonstration vehicle toured various "exhibition" events as early as 1952. It was a strange beast with an empty engine compartment at the front ... 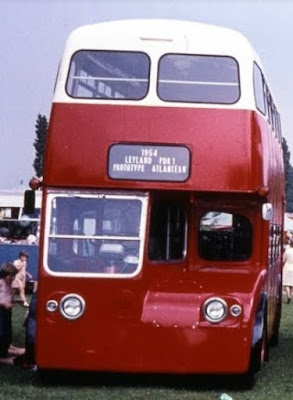 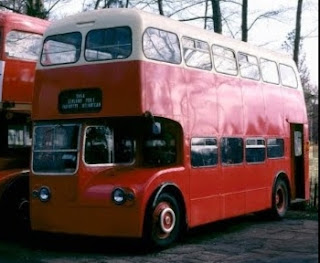 ... as it always had been since the days of horse buses. 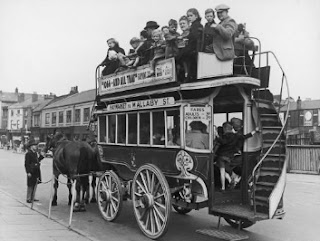 Which visionary at Leyland Buses realised that the entrance could, and should, be at the front is not recorded but today's bus designs owe everything to that clever little chap. 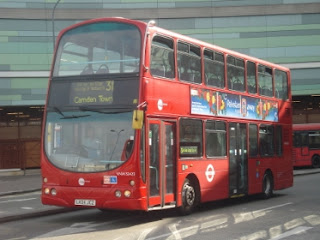 Wrong Kind Of Snow Trumped!
Xiamen is in China, a nation currently fearful of its medical future. Many cities are in "lockdown" which public transport largely withdrawn. Before this horrific crisis hit the country, a twitterer posted this rather splendid "catch-all" apology. 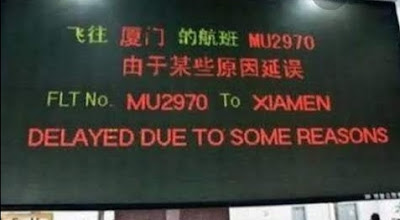 Well, it is right, isn't it? The flight was delayed but the reasons were not revealed.

In this country we can come up with similar. fbb's favourite is "for operational reasons", i.e. the bus/train is delayed/cancelled because it is not operating properly/at all.

Bristol's Big Bother
The effect of two sets of badly planned road works of Metrobus M1 and M3 ha been documented in this blog and widely in the media at Bristol. Delayed buses fill up with passengers for the next journeys and the cloggage multiplies. Buses are this full and passengers nearer the city watch "three bell loads" (remember them" whizz past their stop.

On the M1/M3 common section extra buses have been deployed on an ad hoc basis to counter the crush. Two such trips have now been formally added to the M1 timetable. 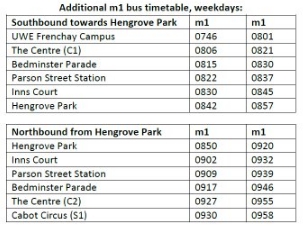 These journeys will offer some relief on the south side of the city where delays at the road works cause unhelpful gaps in the service.

Meanwhile, First Bus boss James Freeman has be talking to the Local Authorities involved as reported in his staff newsletter. 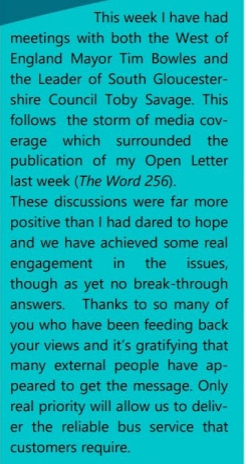 But this did not prevent yet another protest on the streets of central Bristol about a week ago. 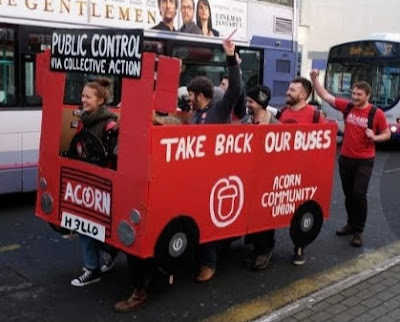 Be careful what you wish for.

Maybe the ACORN Community Union has got the answer? Publicly owned and run "walking" buses? 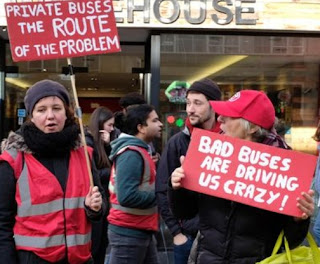 Of course, it's because Bristol buses are so bad that passenger numbers have increased dramatically over the last couple of years.

Or, indeed, you could have locally owned and run buses, as in Halton. 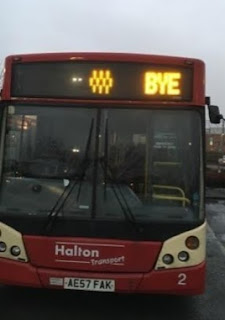 "Ownership" alone is not the answer, but evidence from Brighton, Nottingham and Edinburgh suggests that some local authority companies are getting it right - some of the time!

For Low Flying Passengers?
An advert on the roof of a GoAhead "More" single decker. 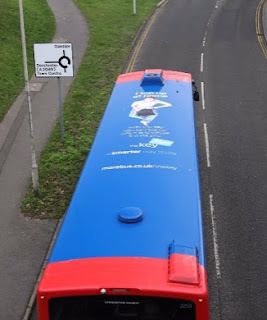 How about selling advert space on the chassis, viewable by workers down manholes? (Whoops, "peopleholes")?

Next Go To University blog : Tuesday 28th January
Posted by fatbusbloke at 02:00