As fbb has already revealed, he is preparing a talk for a local Church "seniors" group, and his chosen title is "Strange Journeys". The idea is to show some of the weird and wacky ways in which folk have been encouraged to travel in the past and the present - with the emphasis being on journeys made by the star speaker himself.


It will be interesting for all, not just rail or travel enthusiasts - well that is what fbb is intending!

Members of the audience very rarely walk out!

Monorails pose a problem of definition. fbb's only trip on a monorail was eons ago when he took the family from Sheffield to Alton Towers. fbb eschewed the scary rides and really struggled with the Teacup experience ... 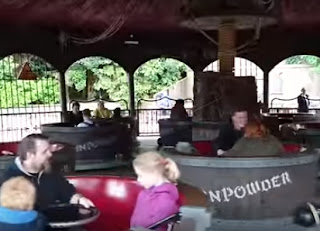 ... which looks scarier now than it did them. Mrs fbb took No 1 son on the Pirate Ship and regretted it for the rest of the day!

Anyway, from car park to main entrance the gang rode the Monorail duly recorded on the slightly battered print below. 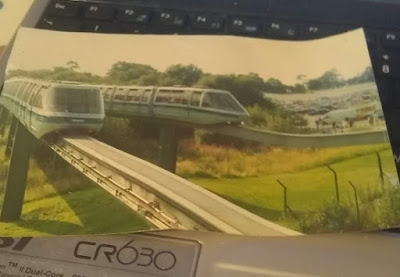 It should be called Mono Gurt Big Slab Of Concrete - and there must be more than one line of wheels somewhere under there. All the UKs mono slabs ate located in entertainment venues, but some overseas cities have real trains up poles. This one is in Sao Paulo in Brazil. 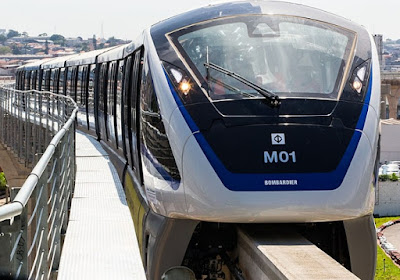 But the first monorail ever built was in?

No the first to carry passengers was in Cheshunt, Hertfordshire. The only pictures of this wonder of 1825 is a poorly reproduced line drawing ... 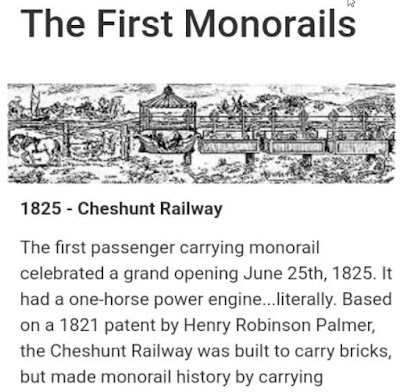 passengers
... or the designer's diagram. 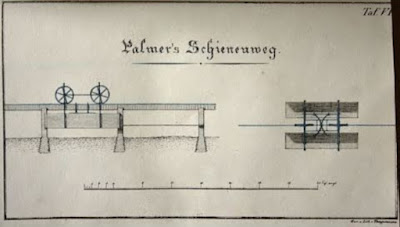 Probably the most celebrated monorail in the British Isles was the gorgeously named Listowel and Ballybunion Railway. 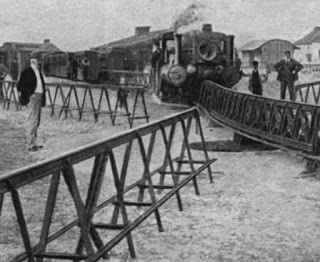 Another cheat as it actually had three rails, the two lower bars were used to steady the loco which had a device on the outer side of each of the double boilers which could bear on the lower horizontal "beams". Loads in the passenger cars had to be balanced so if a farmer wanted to send a cow to market, he might have to send two calves to balance its weight. Then the two calves could return, one on each side, to maintain the equilibrium.

Fortunately a reproduction loco and carriages have been built ... 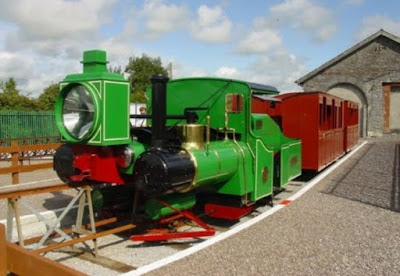 ... but this modern impostor is diesel powered. Shame!

But it was an experiment at Cambridge that caught fbb's "in preparation" eye. 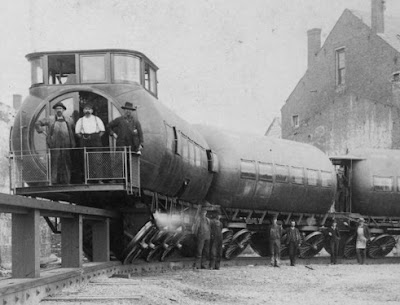 The Meigs Elevated Railway was an experimental steam-powered monorail invented by Josiah V. Meigs (also known as Joe Vincent Meigs) of Lowell, Massachusetts. He wrote an extensive explanation of how the railway worked, complete with diagrams and statistics, which was published in 1887. The weight of the train was carried on a 22 inch gauge track. The train was balanced by an additional set of horizontal wheels which operated against a second set of rails 42 inches above the load carrying rails. A fire, supposedly of an incendiary nature, broke out on the night of Feb. 4, 1887, and destroyed Meigs's car sheds along with the experimental coach and tender and severely damaged the locomotive. 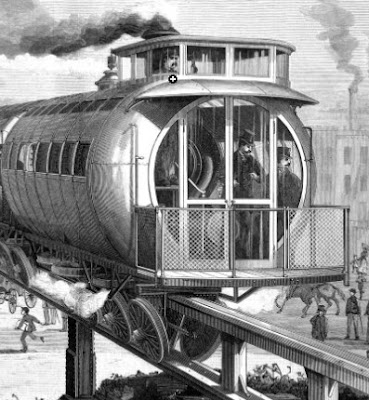 ...and had at east THREE rails, if not four.

It didn't catch on.

East Cambridge, by the way, has no direct connection with the UK University town. Ir is in Massachusetts USA.

But if you want a real monorail with only ONE rail and no other means of support, then this is you man! 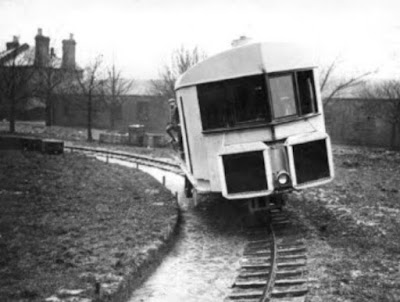 The designer was one Louis Brennan and it was demonstrated in ... you'll never guess ... 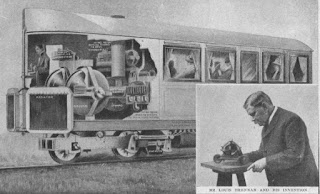 The Brennan Gyro-Monorail was developed by the Irish-born Australian inventor Louis Brennan. (1852-1932) It was 40 feet long and weighed 22 tons, and was designed to carry 10 tons. Speed on the level was 22 mph. The vehicle was balanced by two vertical gyroscopes mounted side by side, and spinning in opposite directions at 3000 rpm. Each gyroscope was 3.5 feet in diameter and weighed 3/4 of a ton each. They were enclosed in evacuated casings to reduce air-friction losses. The rotational axes were horizontal.

The demo version was far less posh than the above drawing, but it is shown as carrying passengers. 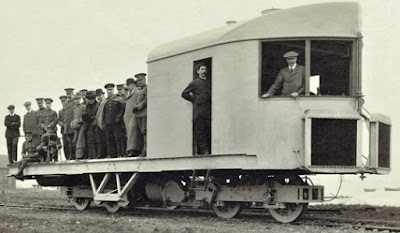 Rather them than me.

The great proponent of the wonders of Gyroscopes was the late Professor Eric Laithwaite whose Christmas Royal Institution lecture was watched avidly by a youthful fbb. 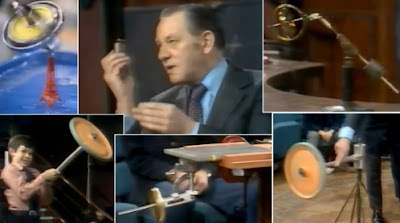 as a popularist scientist he was somewhat ostracised by the "serious" scientific community. He suggested (wrongly but light-heartedly) that gyroscopes defied the laws of gravity. They don't but they do some very strange things.

P.S. Ballybunion (Baile an Bhuinneánaigh) is on the Atlantic coast of the Republic of Ireland in the county of Kerry.

Starting from Listowel, the original steam-powered monorail ran for nine miles to Ballybunion, with one stop on the way at Lisselton. It carried people, cattle and sand from the beaches of Ballybunion: sand was a valuable fertiliser in the nineteenth century. The line was severely damaged in the Irish Civil War and it closed in 1924, and very little of the original equipment remains.

In 2003, a voluntary organisation from Listowel called the Lartigue Monorailway Restoration Committee opened a 1,000-metre section of the Lartigue monorail on the original track bed of the North Kerry line. A double-side locomotive and two carriages with capacity for 40 passengers were constructed by a railway specialist company (Alan Keek Ltd) in the United Kingdom.

But it wasn't a real Monorail - but very few are!