What's The Matter With Matford? (2)

Before fbb gets going, a response to a comment on yesterday's blog.

Ben has a point, of course, but fbb does not use websites "in a perverse way". If a web site advertises a timetable search there is nothing perverse about expecting to find timetables on it. And that is the point. The search on Stagecoach and Traveline should find timetables and the results of that search are shown below.

Ben may have used a different process, but fbb expects to be able to find what it says on the tin. That is sensible, logical and often simply doesn't work.

Searching the Stagecoach web site (remembering to reset the location!) for Exeter's Park and Ride services drew a blank.

Replacing the "and" with an ampersand was equally fruitless ... 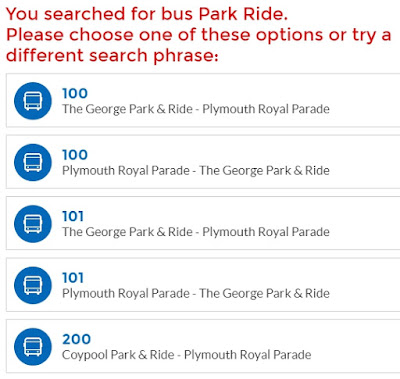 ... revealing Stagecoach's routes in Plymouth. Having set the "location" to Exeter this is daft and yet another example of web site technologists failing to understand what people need, replacing it with irrelevant clutter delivered by wonky search routines.

But when you know the secret code (fbb had to resort to a Stageoach's journey planner, brave investigator that he is), it all becomes blindingly obvious. You have to search for GRN, idiot! How stupid of the average passenger not to know that. 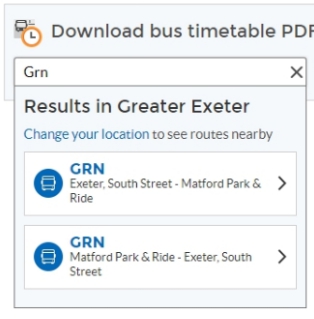 Before an eager passenger rushes off to find South Street, just bear in mind that the GRN Park and Ride has been merged with the blue (BLU?) Park and Ride and, although is still travels along South Street, you can catch it anywhere along the main City Centre (High Street) bus route.

So that particular heading is totally wrong.

Is Traveline's timetable search any better?

... neither is grn or even GRN. It doesn't find the Plymouth routs either!

But GREEN now delivers the goods. 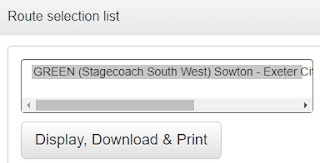 With the help of a timetable, a route map and Stagecoach' City Centre information ... 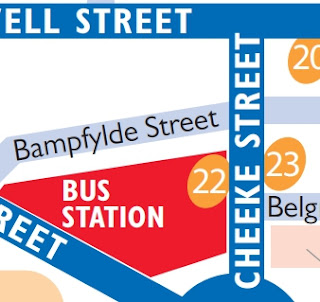 ... fbb realised that he could totter from the bus station along a little footpath to Cheeke Street ... 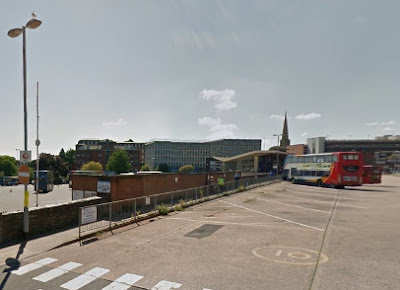 ... outside the former but demolished Stagecoach garage and there board his "GRN" for Matford at stop 22. 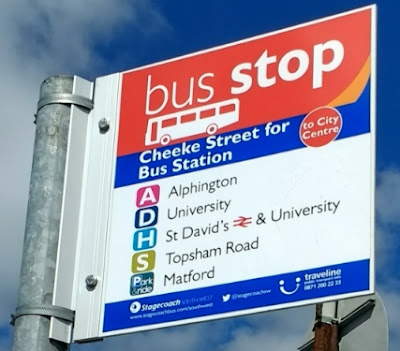 The frequency is reduced to every 15 minutes and some GRNs are still blue ... 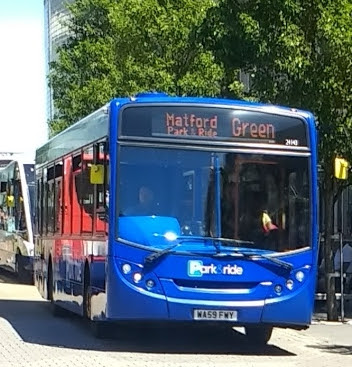 ... the former colour of the Sowton Park and Ride, the two services now being linked cross-city. The green buses are now a different, duller and far less distinctive green. 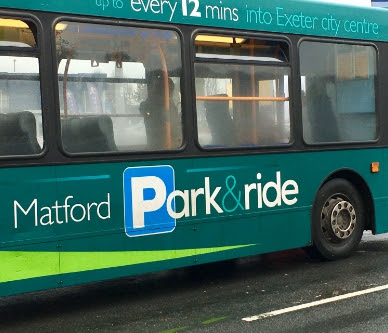 And were every 12 minutes between the former 10 and the present 15.

In passing, fbb wondered how you might find the Sowton Park and Ride timetable ... 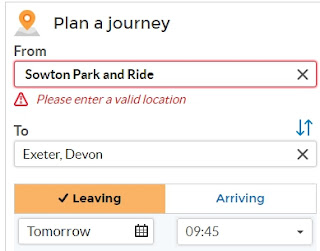 ... again having to resort to the JP. But he refused at the first fence! BLU or Blue don't work either!

But the ride on GREEN was something special and, fortunately, your author was able o get a front seat on the way back, so it's the home ward ride that is here recorded.

Most of the route is via the industrial estates ... 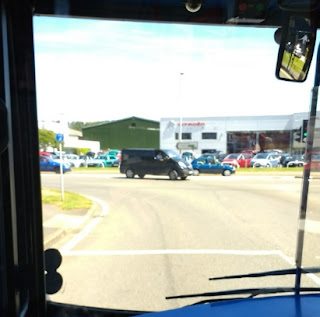 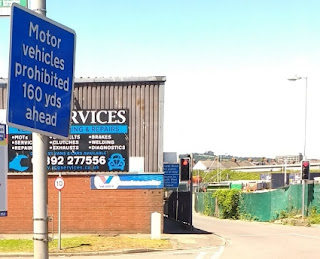 Surely we will turn left here - motor vehicles are banned straight ahead; and why are there traffic lights? 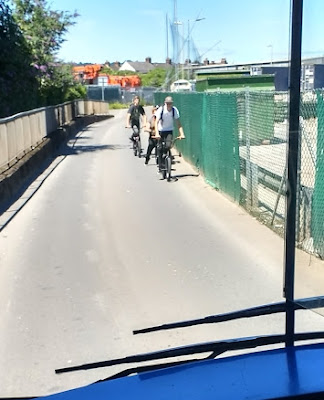 They control a narrow track between high fences, just wide enough for one bus - and with a little space to allow these lads who had ignored the red light, ti squeeze safely past. fbb was not sure who was the most surprised!

But there is more to come. 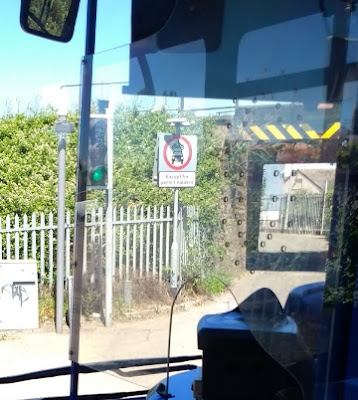 A sharp right hand corner, a low bridge under the main West Country railway line and a second set of traffic lights and boy was it tight! 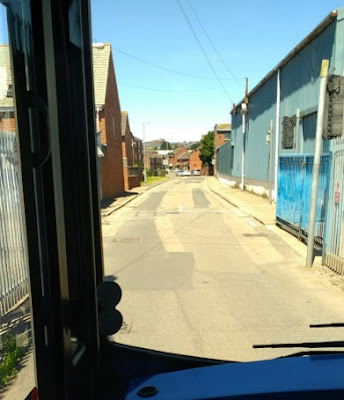 After a sharp, left the terror is over and normality returns.

What about the Model Railway Exhibition, you may ask? It was a very good show indeed with plenty of interest even to non-modellers. There will be a report in due course, but for the time being, two highlights:-

One was a layout from the late 1950s and early 60s. It used Triang grey track, trains from up to sixty years ago and buildings from the same period. Then there was lunch. Steak and kidney pie, peas and carrots plus a mugga ... 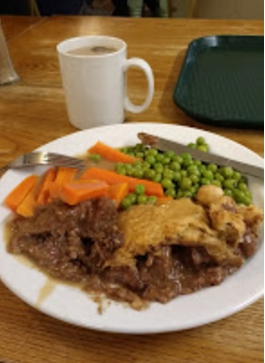 ... all for £6.50. Well the "normal" customers are hard-nosed farmers out to buy or sell their animals; they would not tolerate anything less than "proper grub".

But if you think that bus rides are about gorgeous scenery, take the Matford Green - it's different, it's special and well worth a trip.

One final technological nonsense. fbb returned home on First's X52 from Exeter to Lyme Regis or Bridport. It left the bus station on time at 1415 ... 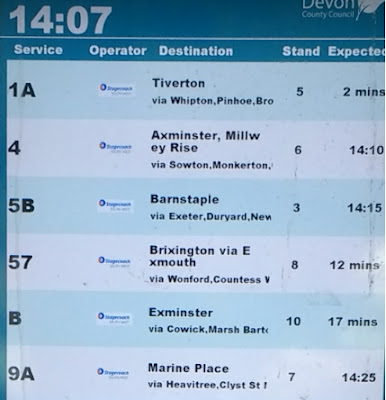 ... with not a mention on Devon County's swish, expensive and often useless new system!


Next as yet unwritten blog : Tuesday 4th July
Posted by fatbusbloke at 02:00