In January 2017 London's Evening Standard was full of doom and gloom ... 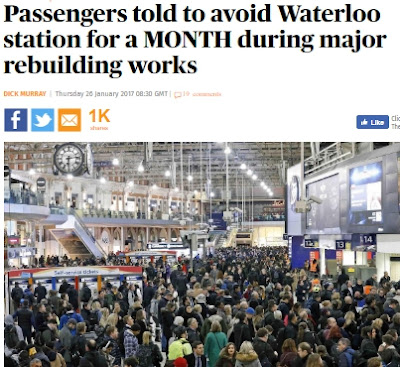 ... accompanied by a picture of Waterloo during a "typical" disruption.

The Times thundered pessimistically back in May. 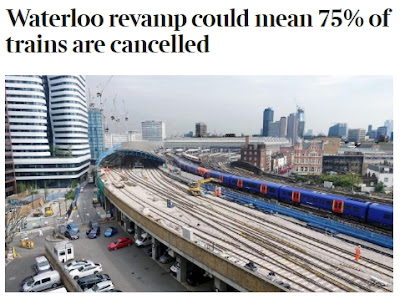 Also, a couple of months ago there was a powerful rumour afoot that the Waterloo work, due to affect train services in a few weeks, might have to be postponed. Notwork Rail, it was suggested, would not be ready, hadn't ordered enough nuts and bolts and didn't have enough workers to do the job. Despite the rumours things have been happening at London's busiest terminus with revised timetables starting very soon. 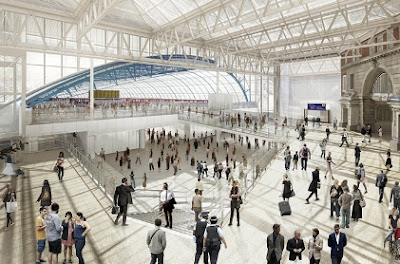 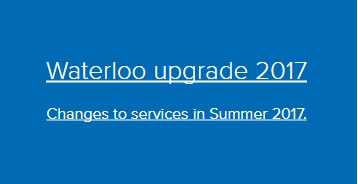 The work will be split into two huge projects. Firstly, the former Eurostar platforms have been brought into full use as part of the main station. This was not as easy as it might seem to an observing amateur. Those who travelled to Europe descended into a "bear pit" which led to ticket and passport checks before ascending back to the platforms.

This necessarily indirect route has been replaced (as per the artist's impression) by direct level access the the new platforms 22 to 24. 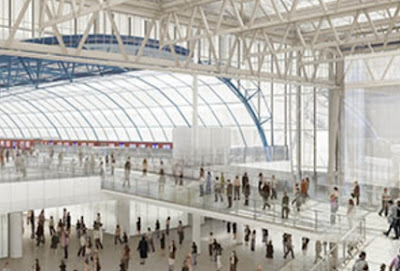 Significant changes to the track at the outer end of the station have been engineered to reconnect the largely independent Eurostar tracks with the traditional Windsor Lines. This work continues apace, but the basics needed to be ready to cater for the other chunk of Waterloo upgrade as explained in this helpful video.
On-line publicity includes downloadable timetable leaflets matching the "normal" SouthWest Trains productions but for Mondays to Fridays only. 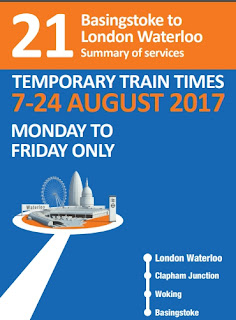 fbb is currently attempting absorb the "flavour" of the timetable changes and hopes to report further with some sample line-by-line reviews. But there is no doubt that regular "commuters" will find their travel more frustrating; with fewer trains, busier trains and slower trains.

Not everyone flees from the Capital during most of August!

Indeed the peasants are revolting! This from an on-line new source.

A South West Trains commuter has slammed the operator's "ridiculous" decision not to offer discounted fares during London Waterloo upgrade works in August. NHS worker Chih-Kai Huang pays £280.40 for a monthly ticket from Hersham to London Waterloo. On renewing his ticket for August, Mr Huang was appalled his ticket price remained the same.

"I think it's ridiculous, surely the fare should correlate with the service that is being offered?" the 34-year-old said. South West Trains (SWT) is not providing the full service but it is asking for the full fare."

Mr Huang said that during the upgrade work the amount of trains traveling from Hersham during the peak morning time will be halved. In addition, the commuting time will be increased from 26-34 minutes to 45-55 minutes as the trains call at more stations.

"It's half a service, with an increased journey time, for the same fare," he said. "I'll have to leave home for work an hour earlier."

"I don't think my holiday should be dictated by SWT," Mr Huang said. "I'm really annoyed by the whole situation, it's absolutely ludicrous, am I the only one to think this is absurd?"

A petition has been started by Alison Bunce in reaction to what she says is the "grossly unfair" decision by SWT not to offer compensation to passengers during the works, especially to season ticket holders."

It is not clear how strong this feeling is; but bear in mind that First takes over the franchise on August 20th just in time to take huge amounts of flak. The newly appointed GM may have his hands full right at the beginning of his tenure. 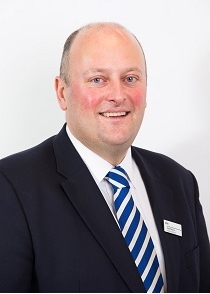 Most recently, Andy Mellors has been responsible for leading the transformation of the GWR rolling stock fleet both through the introduction of new electric trains in the Thames Valley, and the imminent entry into service of the Intercity Express Trains – the first major intercity fleet to be introduced on the UK rail network for many years. This experience will be vital given the exciting plans for a brand new fleet of 90 trains, consisting of 750 carriages on the franchise, plus a refurbishment of existing rolling stock.

Before that Mr Mellors was with First Scotrail.

Whether his experience will prepare him from the onslaught of vociferous Surrey commuters is doubtful. Expect more fireworks there, and not necessarily in celebration of the successful completion of the work!

fbb's timetable investigation should, of course, begin with the line to Exeter, passing through his local station at Axminster. But this is what appears in the list of "leaflets" available.

Strange. The usual policy for all sorts of disruption is to terminate the service at Basingstoke thus making fbb's little line a self-contained, albeit lengthy, shuttle between there and Exeter. It would be largely unaffected by the trials and tribulations of the Waterloo upgrade; provided there is sufficient capacity on the connecting services from Basingstoke.

So why the delay?

Maybe the SouthWest Trains and Notwork Rail planners have forgotten about East Devon? 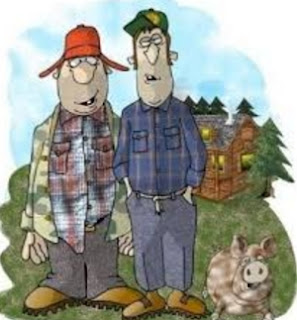 And what about weekend? Still a state secret as this blog was being complied.

Details for train services on weekends during this period, including the Bank Holiday weekend of Friday 25-28 August, will be updated between now and August.

But there are a set of frequency maps which confirm some drastic reductions peak and off peak. 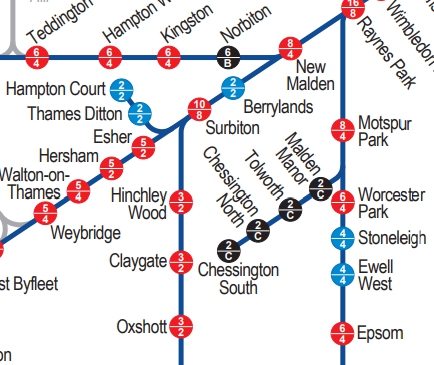 The top number at each station is the existing frequency (morning peak on this map) and the bottom is the number of trains running during the "event".

Norbiton Station is closed completely and the Chessington branch is replaced by a half-hourly bus service. Off peak (and weekends?), Hampton Court passengers must change at Surbiton.

Should be fun (NOT). 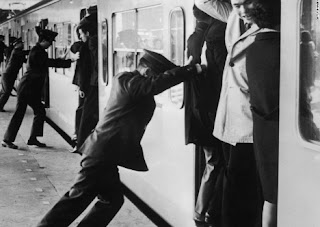 Next SWT blog : Thursday 20th July
Posted by fatbusbloke at 02:00