The British Rail Class 31 diesel locomotives, also known as the Brush Type 2, were built by Brush Traction in Loughborough from 1957-62.

Construction of the first locomotive was completed in the final week of September 1957, and the handing-over took place on 31 October. The Class 31 entered service in November 1957. 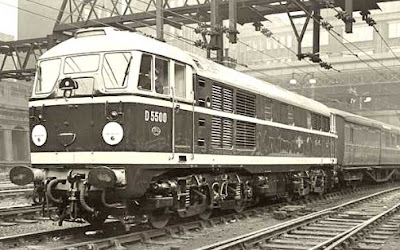 The initial batch were allocated to the Easter Region and D5500's first revenue earning trip was on the 1030 from Liverpool Street to Clacton on 113th November 1957. fbb was 12 and remembers the event through a misty haze, 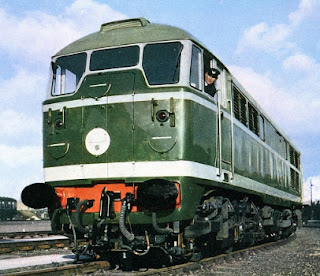 The livery was BR dark green with white (off white?) stripes and big Southern Railway type discs as daytime "repeaters" for lamp headcode positions, the above snap showing the code for an express passenger train.

The white window surround was not perpetuated after the first batch.

Now here fbb's memory stick is struggling to remember. Did not a couple of these locos have special experimental liveries? One appeared in a golden brown ... 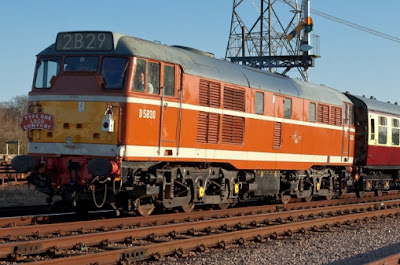 ... similar (but possibly a little lighter in shade) to one operating on the Great Central Railway based at Loughborough. Another one was in blue, and here the fun-time memory challenge has been utterly failed by fbb.

Here is a Triang model introduced in 1962 and in production for just one year. 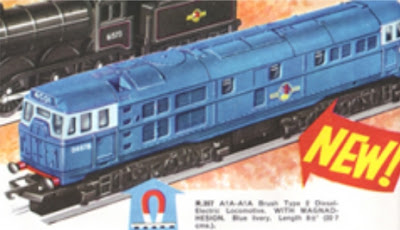 Note : no white stripes. Here is a later model ...

... with stripes and yellow ends and here is a model in all blue with no white window surrounds OR white strips.. 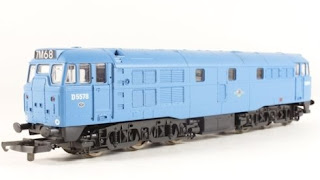 Then this is a real class 31 doctored photographically to look like something the computer manipulater vaguely thought the engine looked like "in the 60s". 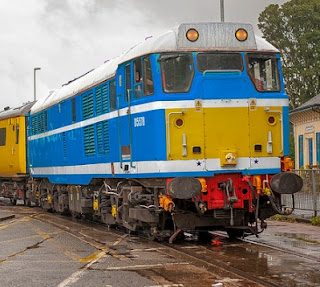 Or here is another 31 on the Spa Valley Railway painted in "Network SouthEast" blue. 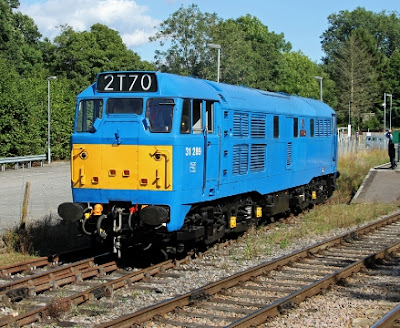 The obese and opinionated one is now extremely confused. What can make matters worse is that a large number of this particular marque has been preserved. This is Wikipedia's list. 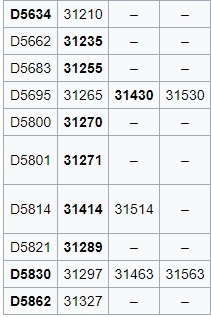 Readers can see that the operating Heritage lines are prone to adorn their locos with a variety of different identities, some of them somewhat fictitious. Another 10 were preserved but have subsequently been scrapped.

The original (D5500) is preserved in the National Railway Museum's collection carrying its later number 31018 and in BR's once standard all-over blue ... 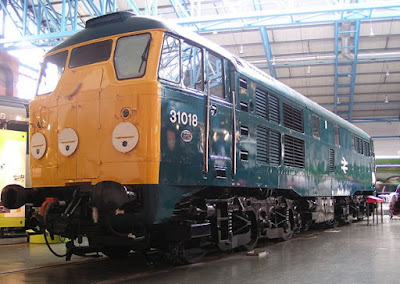 What has around fbb's interest in this long on diesel class?

Two things. Firstly a very old model was running badly on the little Club layout that fbb sporadically helps with. So it was taken back to fbb mansions for investigation. It was a very old Triang model with coarse wheels; it needed a good clean, the commutator being black with dirt and it need a drop or two of oil. 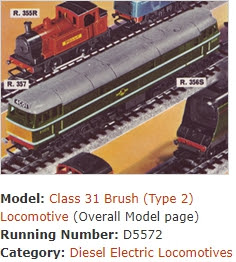 There was also a piece of the body shell missing which interfered with the smooth pivoting of the bogie. The trivial faults were easily corrected but the too-deep wheel flanges means that the model tended to bounce drunkenly through pointwork.

Probably not worth the expense of upgrading.

Then a few days ago a video appeared in fbb's in-box from who knows where. 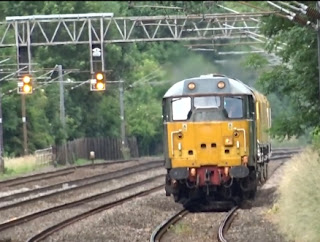 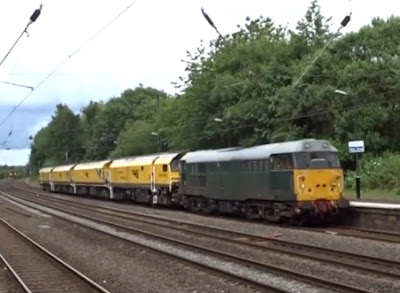 Not only was this getting a tad technical for the old man, but he did not realise there were any 31s still in service on the "proper" railway. Indeed this is the very last one.

Trying to sort out who owns it is another can of worms. It carries the remnants of the livery of "Devon and Cornwall Railways"

DCR operate freight trains. They planned to operate passenger services between Okehampton and Exeter from May 2010 but this has not yet happened.

They are a small but rapidly growing freight company, they currently have contracts for moving the Railvac machine ... 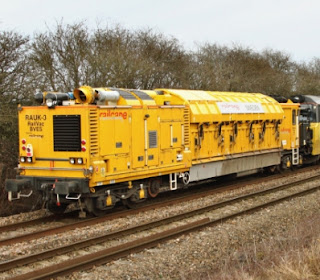 ... to and from possessions for Rail Care working for Network Rail, also have close working ties with several other freight operators and rolling stock providers.

But Wikipedia may not be up-to-date. They say DCR have five class 31s in their fleet, but British Railways.TV says this is the last of the breed, D31452.

Here she is in dark green (as on thee video) but with her DCR logos in place. 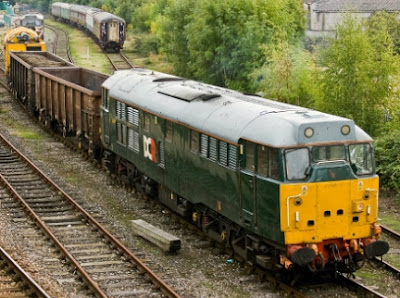 In the video screenshots the loco does look rather "tired"!

Lima, an Italian firm, entered the UK market in the early 1960s producing some British outline locos including their version of the Class 31.

Some experts explain that newer Hornby Class 31s are based on the Lima bodyshell and the Hornby chassis; but the detail is even more complex!

Suffice it to say that the locomotive model has appeared in almost and many livery variants as the real thing as below ... 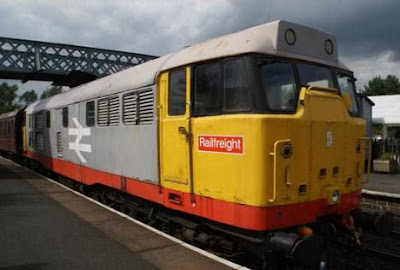 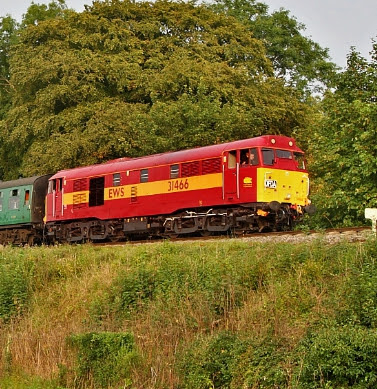 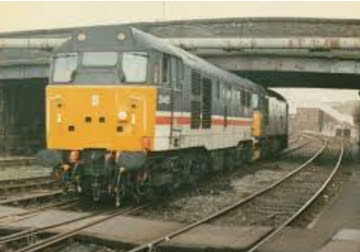 Hattons (fbb's usual supplier with which company he has no commercial connection) will sell you second-hand versions for between £70 and £107. But check on those oversize wheel flanges! 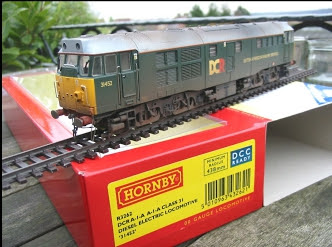 Next London blog : Monday 17th July
Posted by fatbusbloke at 02:00