Several comment writers have informed fbb that the silliness with Damory, First and the X12 is explained thus. Damory (GoShead group) won the contract for all services to Thomas Hardye School in Dorchester whilst First won the contract for the X12/187, called 12 by First. But the timetable agreed with First included some school variants for Thomas Hardye School. Damory were not happy.

So Dorset Council have agreed to continue the contract with Damory for the original services X12 and 187 with First taking over on Monday September 4th, the start of the autumn term in these parts. 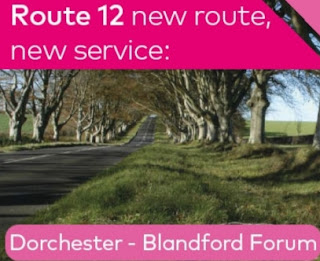 Could it be that the reason First's 12 remains resolutely on their web site is that the company has decided to run it anyway, as a commercial venture and without subsidy until taking over at the end of the summer hols?

Still registered, apparently, are the odd X12 journeys which Damory has opted to run commercially before this kerfuffle erupted. 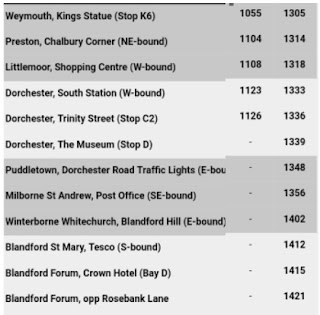 So fbb's parting shot from Yesterday remains "on the table". How many buses, and operated by whom, will be leaving Dorchester at 0936 on Monday. fbb predicts at least two, one painted off white and puce and the other a rich dark blue.

Remember that First has run its service 5 (Weymouth - Crossways - Dorchester) whilst Damory continued to run its 101 over most of the same route. There is precedent for "doubling up"

First responded with a significant increase in frequency. So Wessex (Rotala Group) registered a cancellation from 21st August.

So far it all makes some sort of sense. But then this tirade appears on the Wessex web site.

We have tried to bring in competing services to new areas within the Bristol area, in doing so we have put together special offers and ticket prices far below our competition.

In the case of the 90 we have watched the service change over the last couple of years, this has seen a big re-launch in October 2015 (photo on-line, not included in the Wessex page) ... 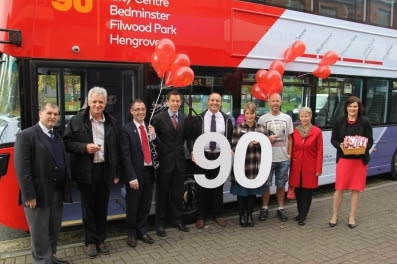 ... and then over the last 12 months the new vehicles introduced have been removed and the frequency of services reduced

We registered our services to help fill the gaps of the frequency reductions and to introduce lower fares to the area, however within one week our competitor decided they could increase the frequency on the service and as a result flooded the service with buses. In addition to this, since our service 90 has been introduced several of our drivers have been victims of verbal and physical abuse.

Whilst fbb does not, in any way, condone bad behaviour by any of the warring factions, he has to ask, "What do you expect". Along comes Wessex seeking to pinch another company's trade and other people's jobs; some reaction is very likely.

Turning the other cheek is the only option and if the abuse in, indeed, one-sided, the Police must be called.

In response to the fierce competition from our competitor and continuing daily driver abuse we will remove our service 90 from 22nd July.

So what has happened to the 8 week notice - AGAIN?

We would like to thank those who travelled with us and supported our service 90 during the short time of operation.

The route end on Saturday but full publicity, as partly illustrated above, remains on-line.

Meanwhile on the Other Side of Bristol
The seemingly never ending saga of route 18. In January 2013 fbb penned a [iece about the ups and downs of this service (read again). 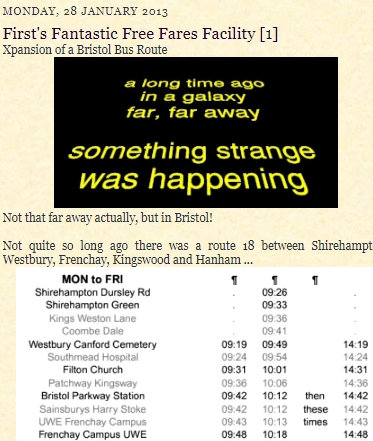 Now it seems that First is giving up today's version of the 18 ... 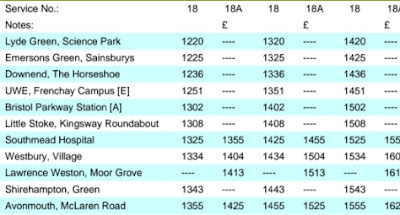 ... and Wessex have registered a replacement. fbb does not (yet) know whether the Wessex version is commercial or subsidised. No doubt somebody will put the old man right!

This weekend cheery chappie Derek Gawn ups his two hourly open top bus tour (based in Seaton) to an hourly frequency. For this he will need two buses. The single decker has been giving sterling service on and off ... 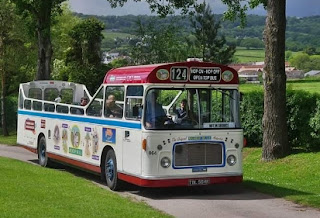 ... but the double decker is poorly. Some bit of wodgit that turns the drive through ninety degrees sort of stopped doing it. 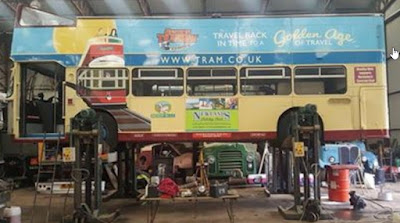 Repairs are under way and recovery may well be quite quick. 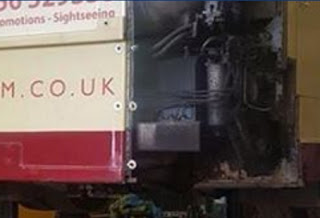 The bits are in there somewhere!


fbb is well aware of that sickening feeling when (a) you lose a vehicle (b) and have to dig very deep to pay the bill. OUCH and double OUCH! Been there, done that, got the tee shirt!


On-line chat suggests that Seaton should expect a First Kernow Atlantic Coaster branded vehicle as cover for the VR's absence. fbb has yet to spot the furren substitute. 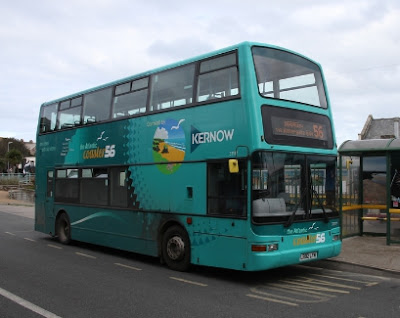 Probably because it hasn't yet appeared on service - and Del-Boy is not telling!

The header to these twits quotes a registration number of S637 SEU but this is a slip of the brain, pen or keyboard. The vehicle is L637 SEU which was part of the City Line Fleet in Bristol. 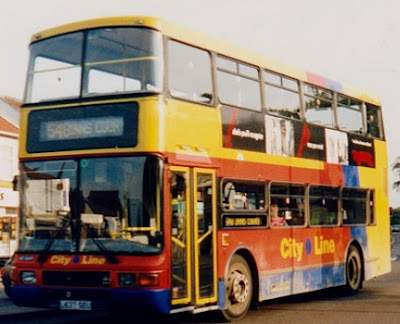 It then lost its roof with the help of  a low railway bridge in Falmouth and became OT in Barbie's colours. 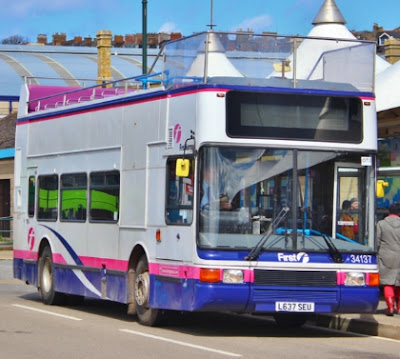 Finally it was adorned with the new Atlantic Coaster livery as a promotional bus as it can no longer be used on stage carriage services. 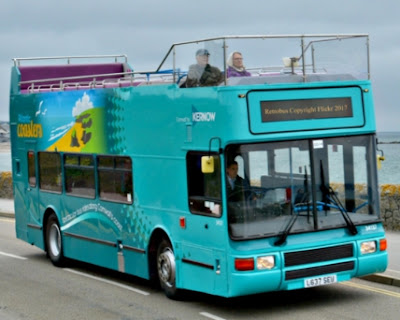 The Jurassic Coaster is not a bus service - it is a tour.

Maybe fbb will take his brolly out today and have a look.