Overcoming The Work Of The Dark Lord

fbb, in a desperate attempt to escape from Poldark, repaired upstairs on Sunday evening to watch the film "Barry Putty and the Teacup of Special Effects." This is the third Barry Putty film that fbb has attempted to watch and the previous two resulted in the early application of the off button.

This time fbb did, at least, last until the end; but there were a few occasions when sleep overcame your old codger, so his interpretation of the plot may be sadly lacking. Perhaps it was all a dream?

The baddy, it appears, is the evil Lord Arrivamort .... 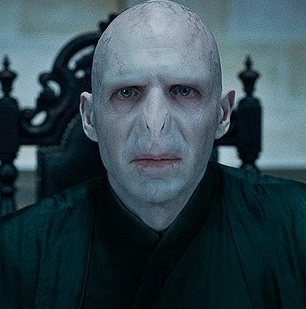 ... played convincingly by Ralph Fiennes. Apart from an appallingly bad "nose job", the Dark Lord is intent on destroying anything and everything that involves the hero, Barry Putty. Any part of Muggle (= human) life must be destroyed to preserve the wizardly blood line.

The destructive work of "his baldness" is the only explanation, as fbb saw it, for the evil that has been at large in the Leicestershire Village of Groby.

dateline 18th February 2017
Buses via the village were reorganised and, positively, the correct route numbers were posted on the bus stop flags between Groby and Leicester. Previously they have been wrong for many, many years. David, our Leicester correspondent, reported thus:-

There were plenty of leaflets available in the village ... 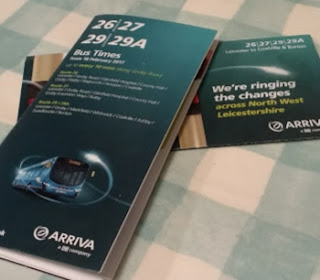 ... so everything in the Groby garden was lovely bus-wise.

But that was before the work of Lord Arrivamort began to hold sway. Notice the last sentence from David's txt, above, "I haven't checked whether the timetables at the stops have been updated. Will check tomorrow".

Tempting fate from the perpetrator of the dark arts of omnibology, surely?

And readers with good memories will remember what happened. The Sunday times posted at the stops were WRONG. In one direction buses actually (on the right) ran five minutes later than advertised ... 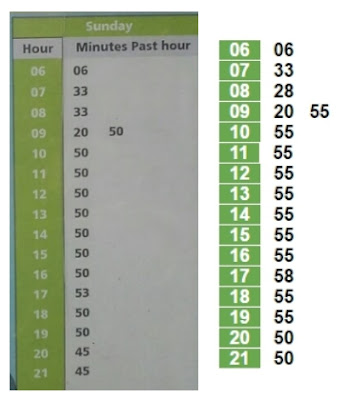 ... so not  particular problem, But in the other direction the service ran ten minutes EARLIER than advertised ... 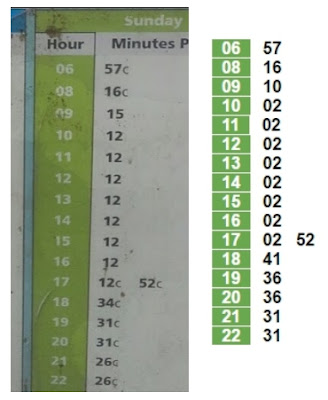 ... so oh so very easy to arrive at the stop and miss the bus - and people did, until the word got round.

weeks following
Chum David reported the error to the Arriva enquiry office at St Margaret's bus station on several occasions. Nothing happened because, as we now know, the folk behind the counter were under the influence of the Dark Lord Arrivamort.

dateline 1st May 2017
Correspondence from Norman to Arriva 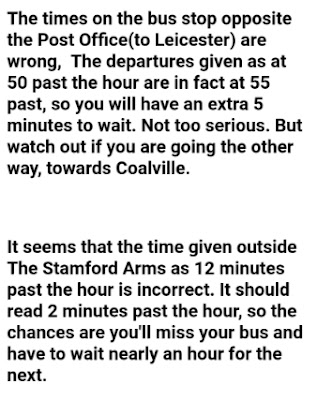 Norman is one of the splendid folk who create the on-line Groby magazine called Spotlight. Only three months has passed and nothing has happened - yet!

But a really quick reply from Arrivamort's lair. 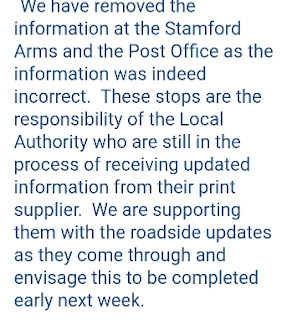 (a) Is it not potty that a business like Arriva should admit that it takes no responsibility for telling its customers what it sells.  Would the customer services people at Tesco suggest that prices on the shelves were the responsibility of a local authority?

(b) Still in the process of receiving print information. What? Since February 18th?

(c) We are supporting them with roadside updates. What? Since February 18th?

(f)  ... but they resolved the problem by removing the whole time panel completely.

But the Dark Lord is still at work.

To recap, it is now just over FIVE MONTHS since the mistake was pointed out to Arriva and still nothing has been done that is of any use to the passenger.

But, suddenly, and no doubt thanks to the brave wizardry of Barry Putty our hero (surely Norman in disguise?) ...

And, amidst rejoicing on the streets of Groby, dancing until the early hours ... 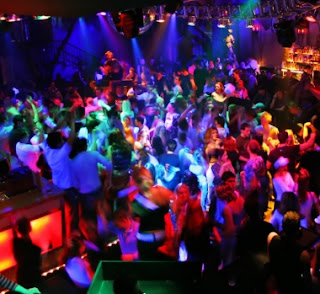 ... and much feasting and imbibing, the new departure lists are now in the tired, vandalised and graffitied frames. 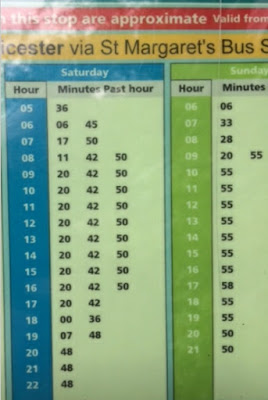 Note that buses to Leicester still run VIA St Margaret's Bus Station, to TO. But you cannot have everything. After five months of gross incompetence the Sunday times are correct - in both directions. 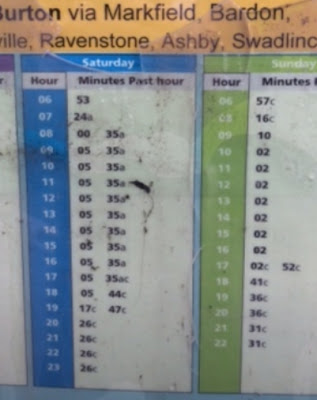 Now everything is correct, it is likely Arriva will be about ready to change the timetables.

The Dark Arts are only resting before the next onslaught on the poor defenseless bus passenger.

SouthWest Trains : The Darkness Continues
Remember that timetables for the forthcoming Waterloo disruption have been on line (Monday to Friday services only) for some weeks ... EXCEPT fbb's local line.

A correspondent reported that timetables were available on another site, but fbb suspects said helpful chappie was referring to Journey Planning. Certainly fbb could find no sight nor sound of the timetable.

But the "were not telling you" on-line message has been changed.

Exeter, Bristol, Yeovil and Salisbury to London Waterloo : Table 20 - There have been late alterations to this timetable. Please check again if you obtained times before Tuesday 25 July.

There has been no timetable before Tuesday 25th July unless it slipped by without announcing itself. But now, at last there is an on-line version. But we are still not privileged to have any details for Saturday or Sunday travel.

"Pops" was at Axminster Station yesterday to collect a grandson who is staying for a few days. 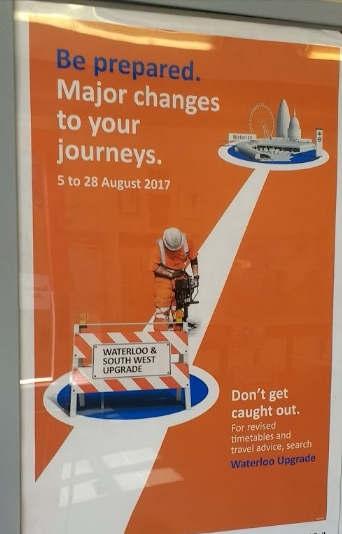 ... and lots of similarly orange leaflets. these give general information but no printed timetables were on offer.

... an for how long has this work been in the planning stage?

It must be Arrivamort's  henchman, Lord Souter The Bearded.