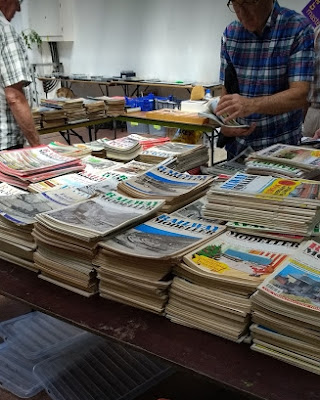 In a corner of the hall was a stall selling back numbers of magazines and there, centre left, were some from the days of fbb's youth; a small pile from 1961. "How much?" asked meanie, expecting to keep his cash well sealed in his pocket. 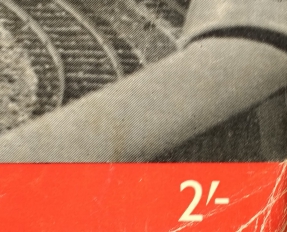 "10p each," came the surprising reply; that's two bob a pop, the retail price of the illustrious periodical on the day it was published. Bargain! 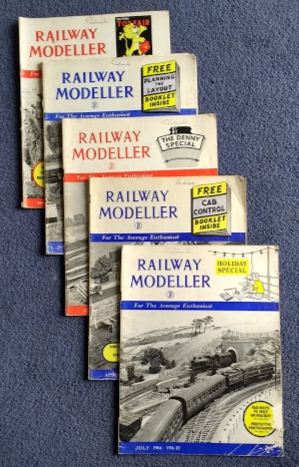 Much hasn't changed in 56 years. Airfix kits are still made but by Dapol ... 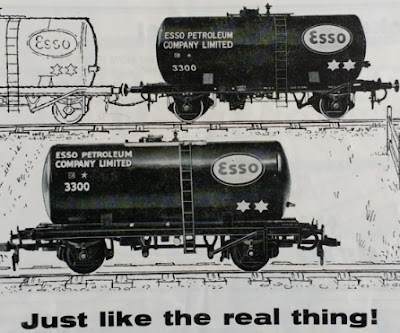 ... but they were so good and so superior to anything else available that the buildings even featured in top layouts taking the monthly headline position in the magazine. 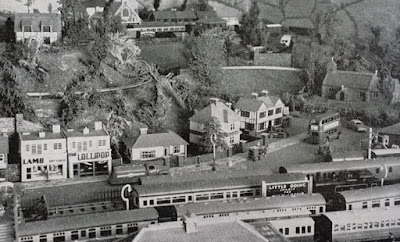 Airfix spotters may be able to identify nine different kits (or parts thereof) in this shot alone. Somehow these plastic beauties have fallen out of fashion, despite the efforts of 1961 authors like J F Rimmer to encourage their butchery into something different. 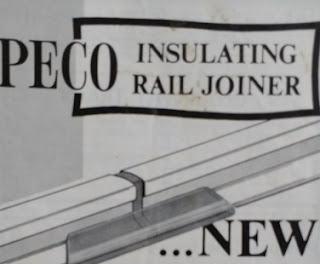 Some names have long gone. Bassett-Lowke, based in fbb's home ton of Northampton, had dominated the model railway business pre World War 2 ... 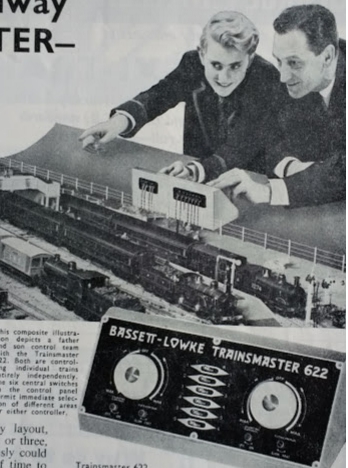 ... but was struggling to find a role in the early 1960s. The company eventually sank without trace.

And Triang Toys Trains Were Tops and Cheap 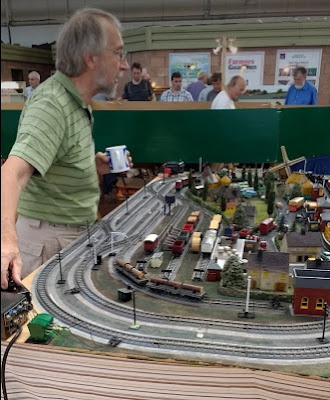 Over on the other side of the hall, this man was showing his Triang layout from the late 50s early 60s. One loco was the very model with which fbb started his teenage modelling phase ... 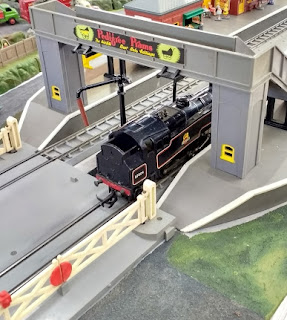 ... seen here about to use a Triang electrically controlled level crossing of 56 years ago. You cannot even buy one of those off the shelf today! Some of the buildings leave a great deal to be desired. 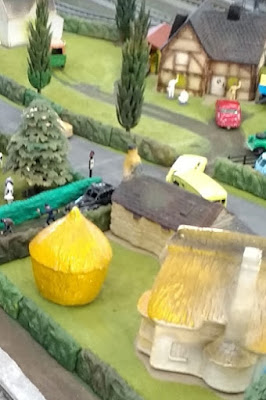 Made of rubber and crudely painted, they never caught the imagination of most modellers; and it is not hard to see why. 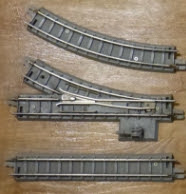 But, weirdly, on the Swiss layout (covered yesterday) was the modern version of the grey clip together rails. 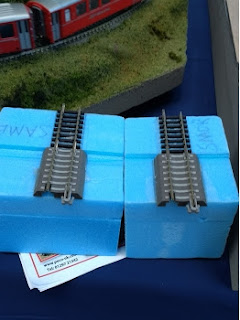 The layout was built in small sections fixed to blocks of expanded polystyrene. The sections are then just plonked on a table and pushed together. And you can see the join. 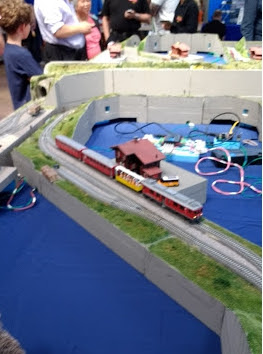 Simple and effective. The modern track is by Kato for N gauge.

Selling Signals and Structures
Small regional exhibitions do not usually attract sales stands from the larger companies and Exeter was no different. But you could buy tools, paints and glue, stuff for making scenery and a wide and weird mixture of second hand stuff.

But one guy was offering to build signals for your O gauge and G gauge railways. 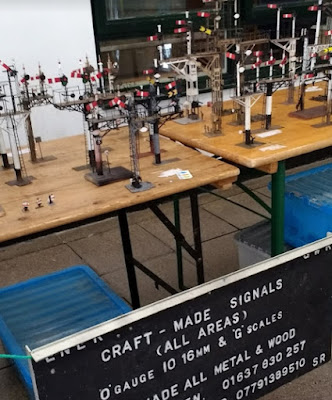 His stall was, to use a technical term, "quiet" but his models were superb and probably somewhat pricey. But signals are fiddly things to make yourself, so might well be a good but for those working in larger sized models.

Then there were these. 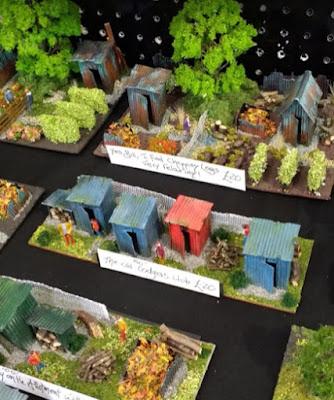 Little dioramas of meticulously hand-made models at very reasonable priced; £20 for the four garden sheds/privvys (privvies?). The guy also sold ready made (by him) card models. 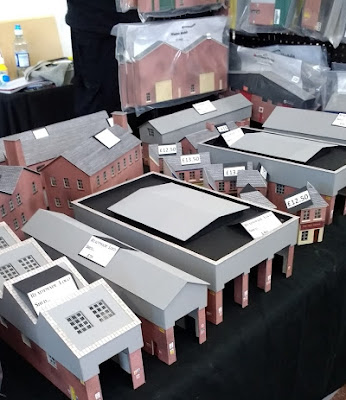 Prices stand comparison with today's resin moulded structures; the three-road engine shed selling for £40. Sadly fbb had to accept that cardboard models would not be ideal for his outdoor layout.

And What A Good Idea.
One layout was large (but lacked activity). It was based on North American practise with lots of long heavy freight grinding round the tracks. but not grinding very often! 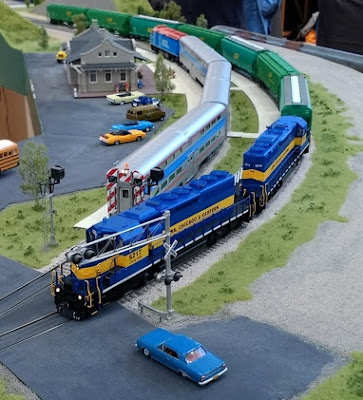 But what was original was this computer screen. 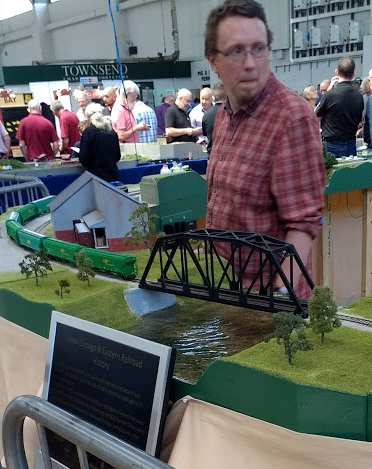 It revealed pictures and details of many of the unfamiliar stuff running along the rails behind the display. 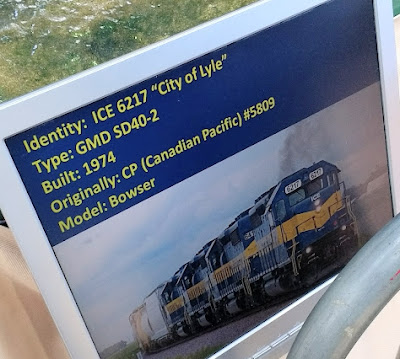 It would have been even better with a bigger brighter screen lifted above the layout.

But Overall ...
Nostalgia and novelty were the highlights for fbb but the overall quality of the layouts on display again indicated how much your elderly author has to learn and develop in his twilight years. The good news, however, is that as fbb wandered round, time and time again he observed worried modellers applying the over-scale hand of God to their trains to try and coax hem into life. 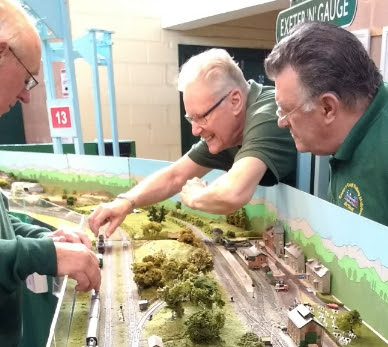 "Well, Stan, it was working when we set it up last night." "It's probably your DCC carrier wave suffering interference from your stay alive capacitor, George." "I reckon it's busted, Bill!"

Now that's much more like fbb's style of operation.

Back to buses tomorrow and more problems to Ayr. (Groan)