Comment and discussion about the "huge complexity" of web search engines following on from the Matford Park and Ride (service GRN) blogs prompts fbb to ask, "Are web designers trying too hard; trying to be too clever?"

The first manifestation of the First Bus App was laughably unusable in many aspects with unfathomable and unidentifiable lists of services plus a whole raft of incomprehensible maps. fbb was "not Appy" (chortle chortle).

The new App has ditched most of this, just leaving a journey planner ... 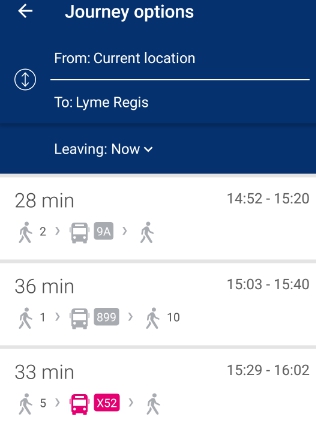 ... which, unlike that on the Stagecoach App, shows all operators with First Bus journeys highlighted. 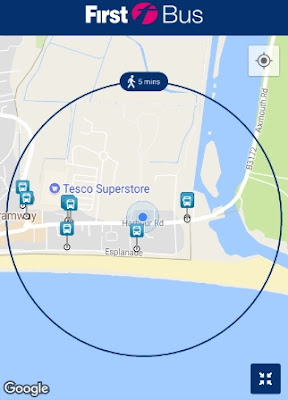 ... which shows the nearest stops to the set location. Tap a stop and the next few departures are listed. 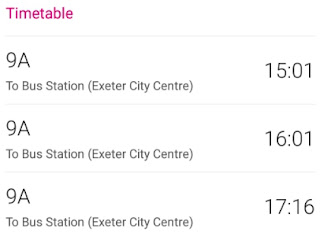 Tap on a journey and you get a list of every stop. 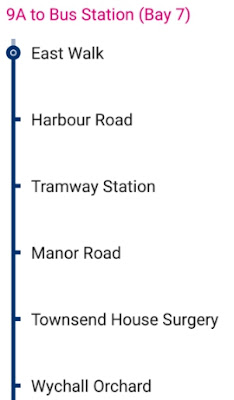 Tap on any stop and that takes you to a departure list for that stop.

fbb is not sure how you might use this option; possibly only of use if you intend to break your journey and continue on the same route? Perhaps fbb is missing something.

But there is no way of obtaining a real timetable, even of the chosen journey.


There is a tap for "tickets", which tells you nothing apart from the possible available of m-tickets. 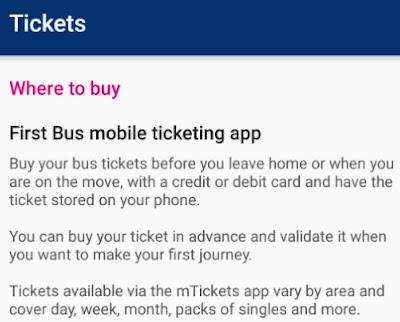 But to make electronic ticketing really useful, you do need something like Oyster, or simple wave and pay on you bank card.

The only other link is to "information", but ... 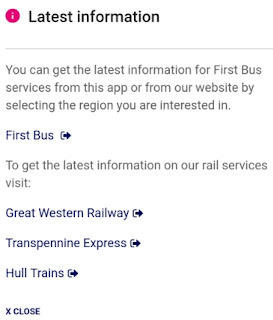 ...the First Bus link just cycles back to a very general nationwide page on the web site.

But the journey planner seems to work well; it draws its data from Traveline, but sometimes fails to tell you what you need to know. The 899 as shown in the screenshot above is a schooldays bus, but nowhere are you told. 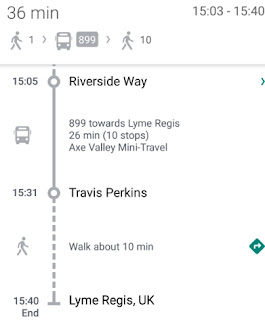 Perhaps it automatically vanishes once the school holidays start?

But it is good that First have reverted to something simple, uncluttered and usable. But (off goes fbb on his boring and repetitive beef once again) why cannot we have "proper" timetables?

Useful Or Not?
On a similar theme, the team behind the GoTimetable App and web timetable system have been taking a look at the usefulness of GPS.

But first, a health warning. Most of us know that our snazzy mobile phones have a link to GPS (Global Positioning Satellite) data - the phone knows where it is unless "location" is turned off. But inside your home or office, the phone connects via wifi and thus uses wifi's version of a GPS locator. It is not the same system and can give less accurate results.

The other problem is that the only way you can experience this GPS-ing of a timetable App is to go to the area of operation, travel around and see it happening.

Here is a short journey in Seaton with screenshots taken as the bus proceeds through the town. fbb boards at Harepath Road Industrial Estate. 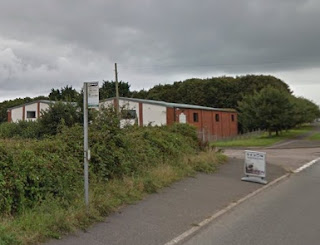 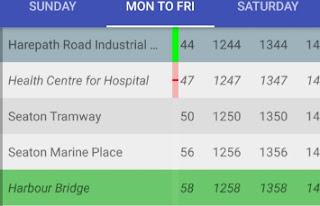 The user has selected their start point from the "three dots" menus, likewise their arrival point. Harepath Road Industrial Estate has acquired a green bar; the health centre is some distance away. 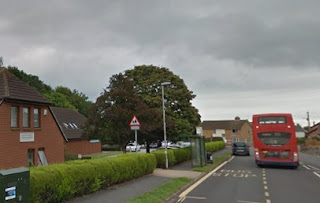 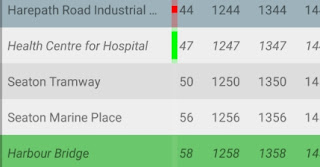 Note how the bars change colour. Next we arrive at the Tramway stop. 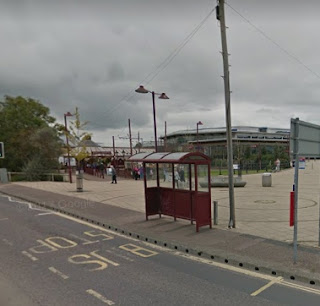 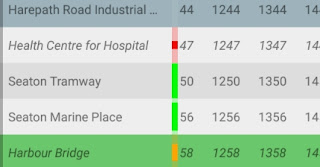 The Tramway and Marine Place stops are close together, so both show green. 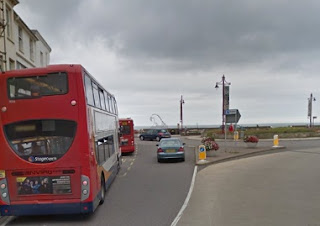 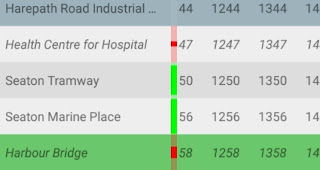 A quick trundle along Harbour Road and the GPS has delivered fbb to the nearest stop to fbb mansions. 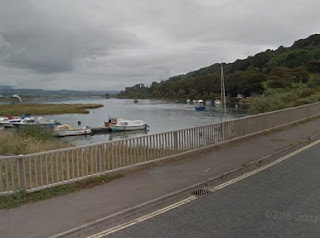 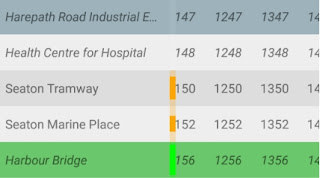 You may have spotted that fbb was not actually on the bus - he was following by car.

When the techie team sent this to fbb for testing, the old man was unsure of whether it would be any use. As instructed he set off on a round trip; Seaton, Exeter, Axminster, Seaton. Your author had never previously ridden service 4 between Exeter and Axminster and the benefits of the changing colours was immediately obvious.

As the bus trundled along, bars turned to green in just the right amount of time for ringing the bell for next stop. It was very impressive and would offer great comfort and confidence to a passenger who might be unsure of here they were or where they wanted to be.

A great confidence builder, clever technically but oh so simple to understand. And, of course, it is totally independent of the actual time of the bus, however late (or early) it might be.

GPS plotting will be added to GoTimetable Sheffield very soon.

Still Not Appy!
At the risk f further arousing the ire of correspondent Ben, fbb still has to know that the name of the bus to Matford is GRN ... 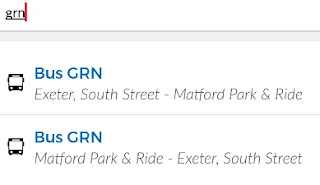 ... and there is no mention of the other end of the through route, namely Sowton Park and Ride. The journey planner, favoured by many users of technology, still has no idea ... 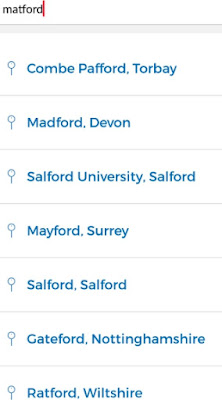 ... that you might want a bus to Matford. And there are no timetables.

For the record, the GoTimetable sites use a pathetically simple text search to delve into all the files on the particular system. For Android phone users the App is downloaded and needs no signal once in place. This means that searches are instant. Her for the word "cross". 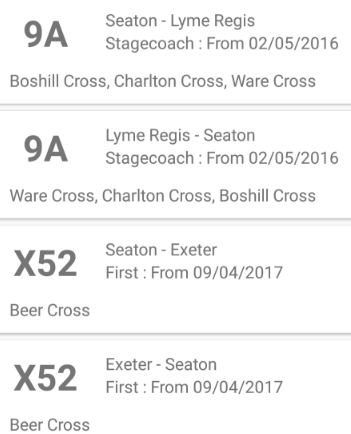 It currently only looks for single words, but its speed and the way it displays the response means that an iterative search is easy peasy. It can be a very very tiny tad slower in the on-line versions, but still very effective. But it is simple.

Next catch-up blag : Wednesday 5th July
Posted by fatbusbloke at 02:00