Bristol correspondent Paul was in Teignmouth recently and was very (UN)impressed with the Devon County information display. This particular Monolith was outside the W H Smith store in Regent Street Teignmouth. 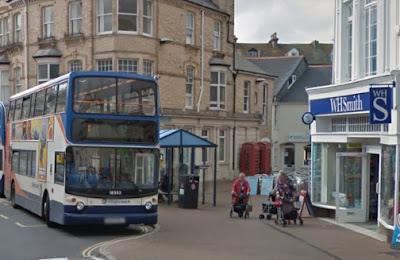 So bemused was Paul that he quickly snapped the screen. 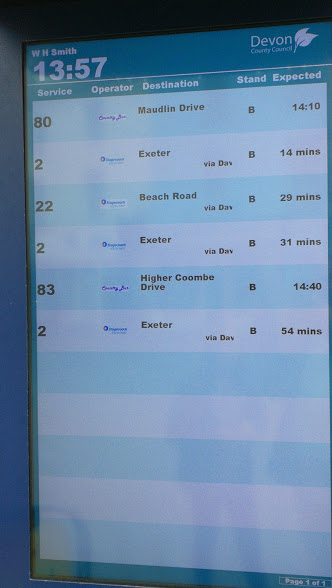 Route 2 is going to Exeter via "Dav" whereas route 22 will terminate at Beach Road ... 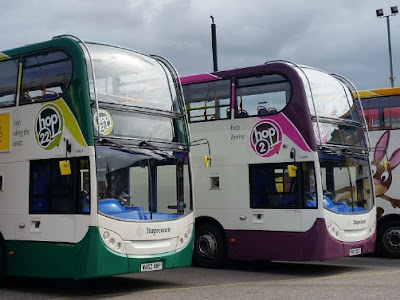 Obtaining the 22 timetable ("Hop22" to be specific) doesn't add much to the mixed messages offered to the passenger. 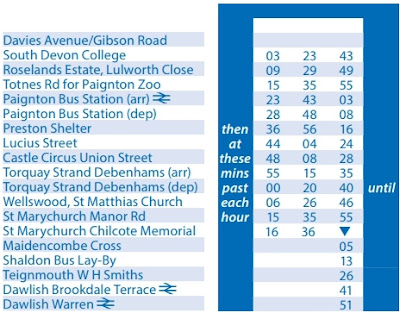 The departure is the 1426 to Dawlish Warren; no mention of Beach Road on the Stagecoach timetable. But it is true! The terminus of the Hop22 is here ... 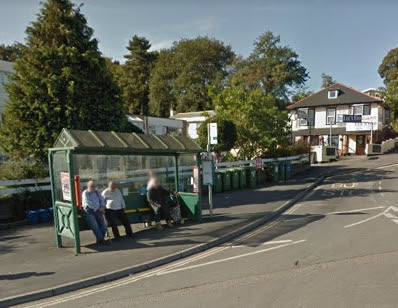 ... at the inland end of Beach Road Dawlish Warren.

Paul reckons "Dav" is a non scrolling Dav-vlish (Dawlish) confirmed when he looked at the screen a few seconds later and the 22 was now going via "vlish".

Helpful - Not very! Devon's data is daftly delivered by this disappointing device.

Branding Buses Bewilders!
The chaps who work for GoAhead's Plymouth City Bus have come up with a jolly good idea (?) implemented with gusto and enthusiasm over the last year or so. Lets paint our buses in different and bright colours and call them Red Flash, Blue Flash, Yellow Flash, Green Flash, Taupe Flash and Heliotrope Flash.

The first in the fray, four years ago, was Red Flash. 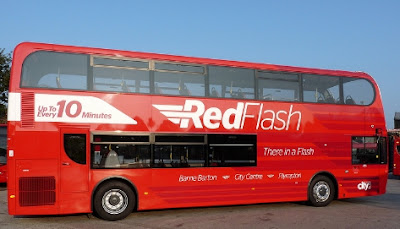 This was chosen for service 21 which runs from Barne Barton on the northwest of the centre ...

... to Plympton and Chaddlewood on the east. 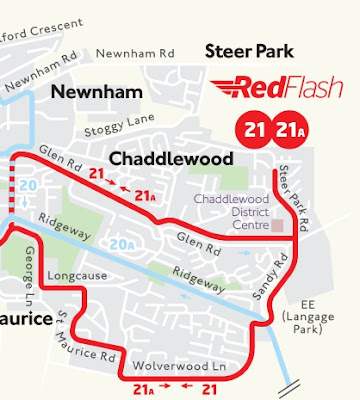 Other than the label ... 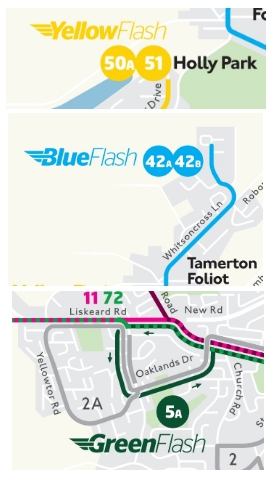 ... and a bit of marketing hype, the routes were very "normal". The name appeared on the publicity as well as on the vehicles ... 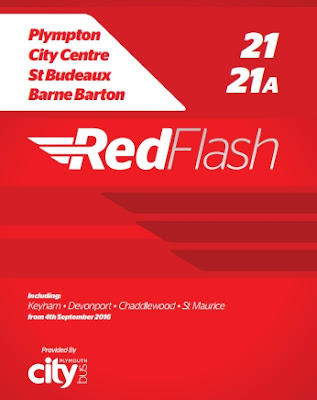 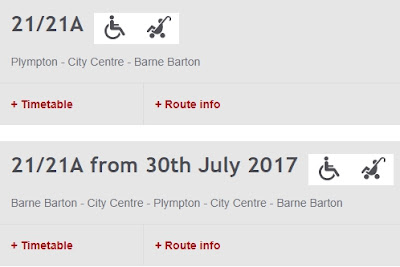 No flashing there! But it changed yesterday.

You see, the Plymouth folk are tired of their flashing red buses. The Flash is now trash! The branded route is in the process of being re-branded; no longer a Flash but a mere Spark.

From a Flash to a Spark, Plymouth Citybus’ recent £3.5 million fleet investment takes to the roads this Sunday 30th July.

Sixteennew Enviro 400 City vehicles will bring new standards of passenger comfort, capacity and performance to Plymouth’s bus network on top of a bold new identity. The new brand, ‘Spark’ is a step up in passenger transport, boasting free Wi-Fi, executive leather seats and for the first time in the Citybus fleet, USB charging points throughout.

Not only are the new buses comfortable and look great, but they are good for the environment too. The euro six diesel engines now have a carbon reduction upgrade, meaning the emissions are independently tested and certified as low emissions vehicles.

The new vehicles will be rolled out from 30th July on route 21 and 21A, serving Plympton to Barne Barton via the City Centre. The cross city service is the busiest in Plymouth currently using Redflash buses, introduced four years ago, which will now be moving onto the City’s northern corridor.

Of course, the new buses are the very latest with WiFi, charging points, "leather" seats ... 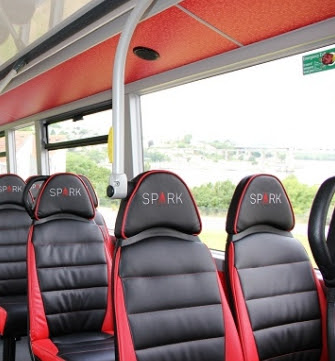 ... wheels at each corner and a big powerful engine to make them go.

The vehicles look special, the route and frequency is unchanged so the big question for the Management is whether lots of extra passengers will travel because a Flash has become a Spark.

No 1 Son is In Vancouver ...
... although he didn't tell mummy and daddy he as going. It is some sort of conference thing at which he is performing in some way. But he did send some piccies which fbb will follow up in due course.

First is the Skytrain; not to be confused with Mr Laker's doomed airline. 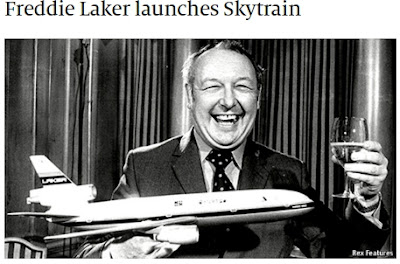 Vancouver's Sky Train link Airport with Downtown (that's the town centre to you and me) and here it is, about to transport him there. 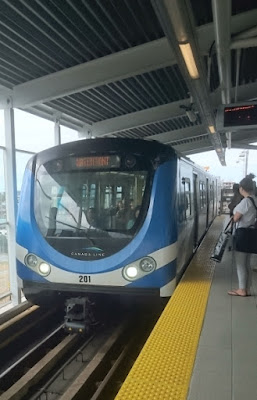 Then there is the route 405 bus which took young sir from Conference Centre to Hotel. 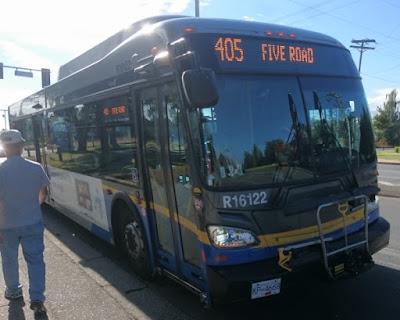 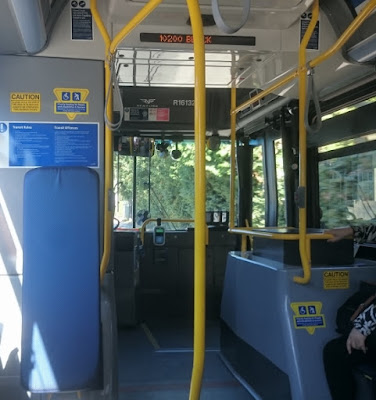 More investigation needed. To follow when fbb can find the time.

August tomorrow! Already! The years much be getting shorter, like Kit-Kats! 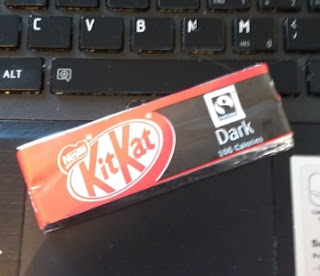 Next bus blog : Tuesday 1st August
Posted by fatbusbloke at 02:00