The Monolith of Mystery

HAL is at Work Again? 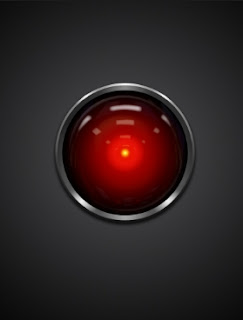 HAL 9000 is a fictional character and the main antagonist in Arthur C. Clarke's Space Odyssey series. First appearing in 2001: A Space Odyssey, HAL (Heuristically programmed ALgorithmic computer) is a sentient computer (or artificial general intelligence) that controls the systems of the Discovery One spacecraft and interacts with the ship's astronaut crew.

Back in the late sixties we were all agog at the film 2001 A Space Odyssey. fbb went to watch it and can honestly say that he didn't understand it at all back then and his comprehension has not improved since. Somewhere in the plot was an ominous black Monolith which "was full of stars". 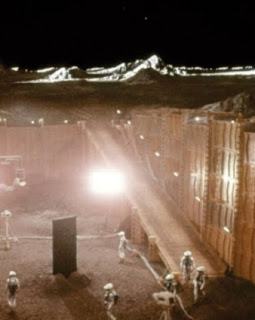 Northampton correspondent Alan reports something similar has landed (materialised, been transporterised - who knows) into a suburb near him.

Alan, wit and raconteur that he is, begins his emails with a puzzle. "What," he asks, "is Smiler doing at St James?" 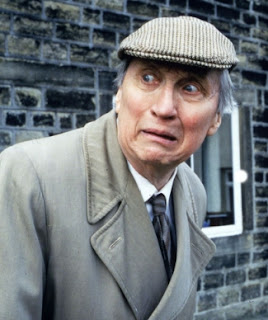 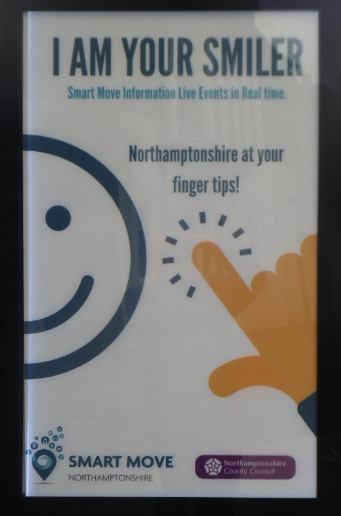 It looks as if some clever salesman has persuaded the Borough Council to spend money on a trendy Monolith that is not fulled with stars, but with adverts and, possibly, bus times. What does S.M.I.L.E.I.R.T. offer to the adoring public? 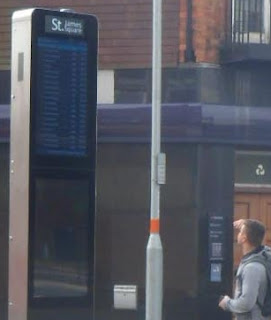 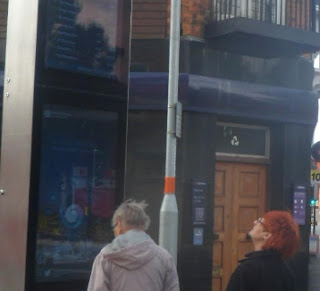 If only Northampton's bus passengers were about eight feel tall, they could read the screens with ease.

The Monolith is located at:-

or on top of the Monolith itself

For those with their personal step latter to hand, here is what you might read on the Monolith fro  the Planet Zog. 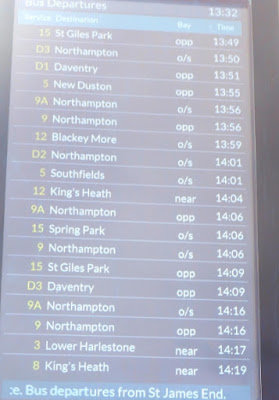 Smiler sits outside the Natwest Bank at a location that someone who programmed it thinks is called “St. James Place”

It is not real time information, (offer number two) but I think the whole system had gone “phut” on Friday.

Service 3 terminates a mile short of Lower Harlestone.
At 1417 it should be in Wootton.

9 / 9A Northampton is meaningless. The "o/s" 9A is travelling away from Northampton!

What is all this near, opp, o/s guff? Just letter the four  adjacent stops A,B,C  and D and use those letters as reference points.

All THREE of these routes will take you to Northampton

I hope the thing is still under test: If it is not it is a case of Smart Monolith - Stupid Information. 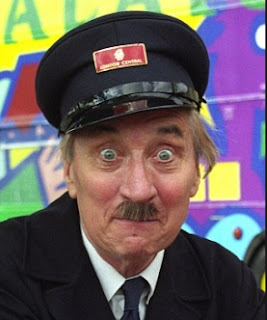 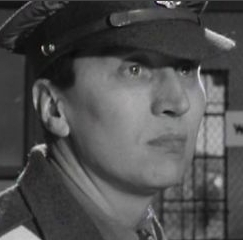 ... was an English actor, comedian, director, screenwriter, and playwright. He is best known for his television roles as Inspector Cyril "Blakey" Blake in the LWT sitcom On the Buses and Clem "Smiler" Hemmingway in Last of the Summer Wine.

Thanks to Alan for providing much of the material for this blog.