According to the date on the Ayr town services on-line map, "The Vision" was revealed to an unsuspecting public in 2012. fbb is not familiar with the detail before Stagecoach started seeing its visions, but notes on the may imply that there were improvements in frequency from September five years ago. 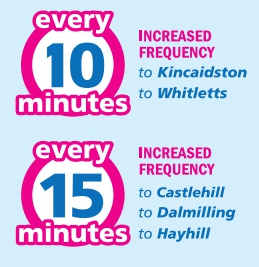 The plan for the Daily Record's bus-mageddon is best looked at in manageable chunks. Routes northbound to Prestwick (of airport fame) appear to be unchanged.

The above panel is slightly misleading as the service to Prestwick and Marchburn is provided by routes 2 and 6 operating opposite ways round a mega-loop. 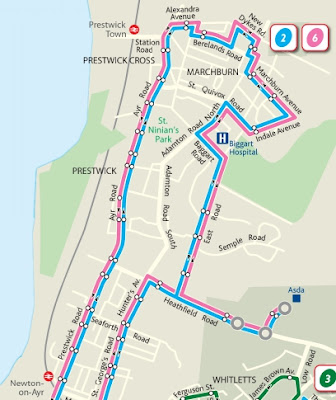 Each route operates every 15 minutes, so it could be argued that there is a bus every 7/8 minutes to the northern extremities. This is the service 6 version. 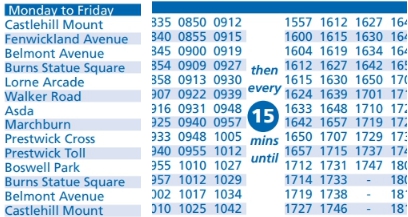 Sunday frequency is a parlous hourly bus on each circle.

One major traffic objective on the circulars is "The ASDA" ... 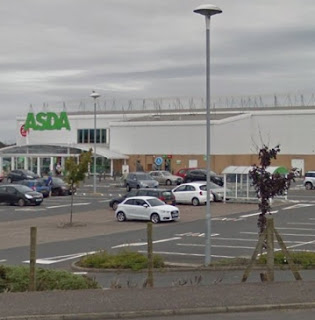 ... plus all the usual associated goodies like Pizza Hut and Kentucky Fried Gristle..  More traditional shopping on Main Street Prestwick ... 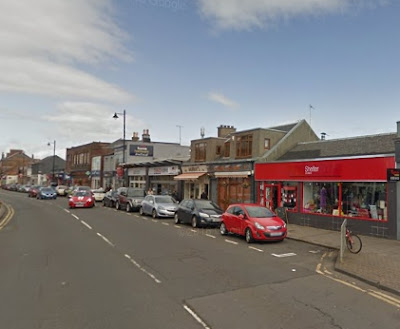 ... and areas of housing provide the bulk of the business for these routes. 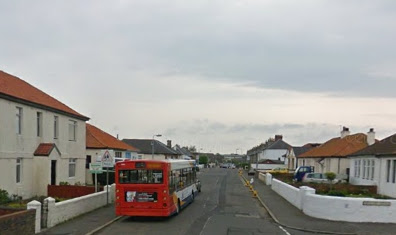 These circulars are not being culled or scythed under the horrific plans (as per The Daily Record) for operation after 13th August, effectively the end of the school summer term.

To the east of the town centre, however, Service 2 is being cut back. 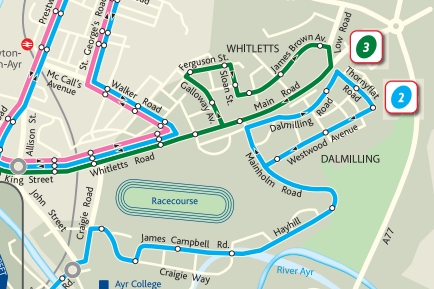 Services 2 and 3
It is proposed that the 2 which runs from Dalmilling to Asda via Ayr and Prestwick Cross would terminate at Hayhill at the junction with Mainholm Road.

Where there is a ready made turning circle left over from a previous manifestation of the Hayhill service.

Dalmilling would be served by the service 3 every 12 minutes and it is proposed that, rather than travelling via Whitletts Road, it will travel via Westwood Avenue and Mainholm Road. This will provide the residents of Dalmilling with a new direct link to Tesco and the town centre without having to travel via Hayhill and Craigie.

fbb suspects that the terminal loop pf service three is enlarged to include Westwood Road in Dalmilling. 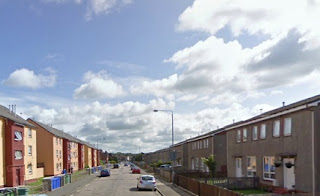 Service 3 is currently every 10 minutes, so the plan reduces the service to the Whitletts side of the proposed mega-loop, but increases Dalmilling's frequency from every 15 to every 12; hardly the doom and gloom of the Record's record. Although, to be fair, the paper has nothing to day about Ayr's town routes, possibly because it's reporter doesn't have any idea as to where they go.

Changes to the 3 mean that the service to Kincaidston (an area of newer-style housing) ... 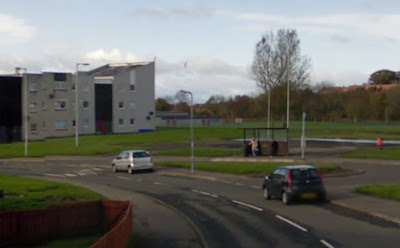 ... is similarly reduced, but the 6 to the older more traditional Castlehill ... 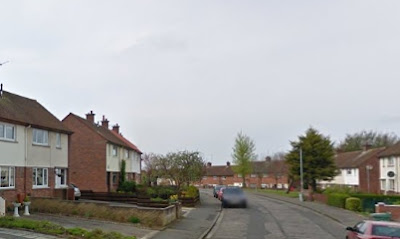 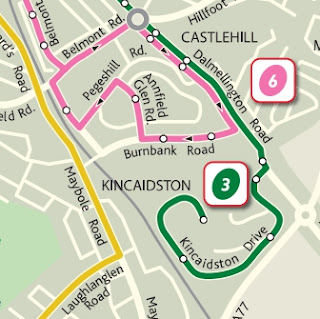 Which leaves is with routes 1 and 9. 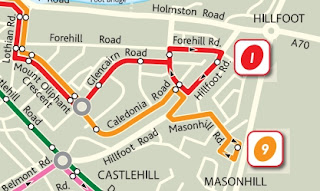 Here you could describe the proposed changes as a cull. The 9 to Masonhill ...

... currently runs every hour whilst the 1 to Hillfoot ... 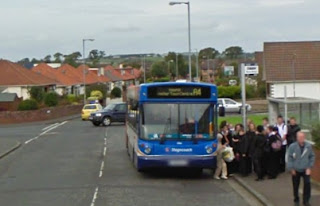 In a desperate attempt to encourage passenger numbers, the timetable heading and the map tell us that the bus runs to Hillfoot, whereas the timetable gives the terminus at Holmston Shavin Brae. They are the same place! Under a previous scheme the 1 used to be an A4, hence that designation on the somewhat dated Google Streetview picture above.

But here, Stagecoach is proposing a significant cull.

Changes to services 1 and 9 in South Ayr
A combined hourly service 1 from Hillfoot/Masonhill to Ayr with the bus serving Glencairn Road rather than Caledonia Road.

Which, being interpreted, means that the area generally will drop from three buses an hour to one. OUCH!

The other end of the cross-town 9, however, remains hourly in splendid isolation.

Doonfoot would be served from Ayr on an hourly basis by the 9. 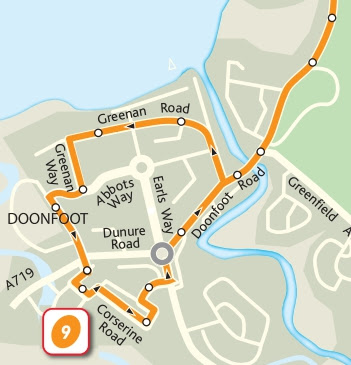 Can we draw any conclusions? One service (1/9) is truly scythed whilst others have slight improvements or slight reductions in frequency; but most passengers will see little difference. In modern bus management-speak this represents "good housekeeping" and may well be correctly represented by the boss man's internet-bite.

We have seen some big changes in our customers’ travel patterns in the last two years because of things like internet shopping, working from home and traffic congestion in our towns and cities.

We have to adapt to these changes and that is why we are consulting on these proposals. We want our customers and other local stakeholders to help us shape a network of services in South and East Ayrshire that best serves the current and future needs of local workers, students, job seekers, retired people and visitors.

Or maybe does it actually mean "our profit margins have dropped and we need to keep shareholders and the city happy"? However much we may regret it, that's what running a business is all about.

Tomorrow we try to unravel the mysteries of the inter-urban routes from Ayr, for which fbb has to create a map as neither Stagecoach, Traveline Scotland nor South Ayrshire Council provide one.