The northern coast of the far west of Cornwall is sparsely populated and sparsely served by bus from Penzance (click on the map to enlarge). 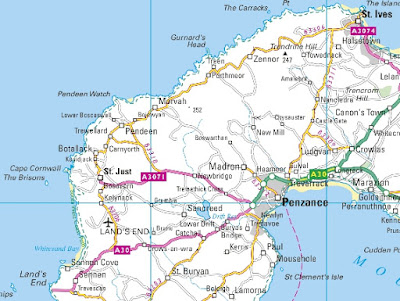 First service 17 runs via St Just and eastwards to Pendeen whilst service 16A goes to St Ives via the Gurnards Head Hotel, a tidy step from the actual "Head" as quoted in the timetable! 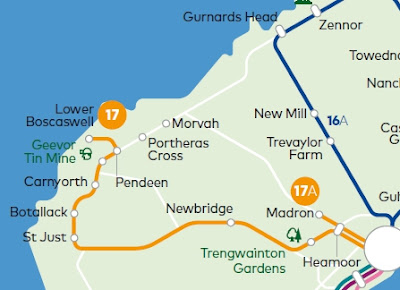 Often overlooked is the service 7 offered by the West Penwith Community Bus ... 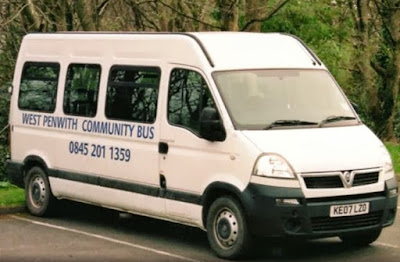 ... which links Lands End with Zennor via St Just.

In recent years, First has offered a service 300 with variable number of round trips. Two years ago, when fbb was in Penzance, this route was not frequent ... 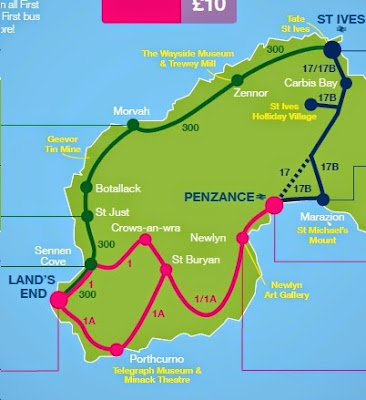 ... being three trips a day, usually on a vintage Bristol FLF. 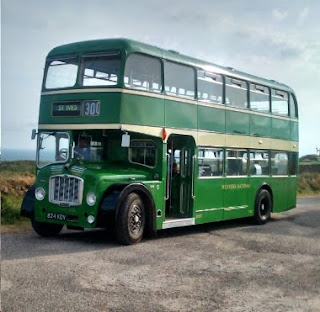 The trips that fbb observed were poorly loaded. 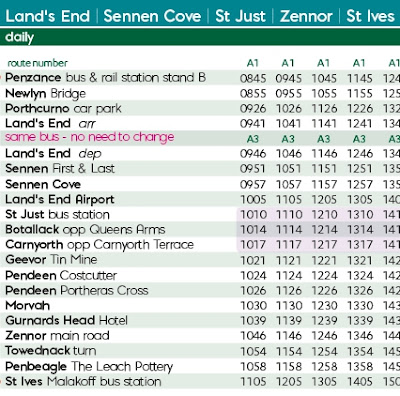 ... "connecting" (i.e. through buses) with the A2 at Lands End. Open top buses are due to be provided.

Scenery pictures never do justice to the live view, especially from a breezy top deck. But here are some samples. 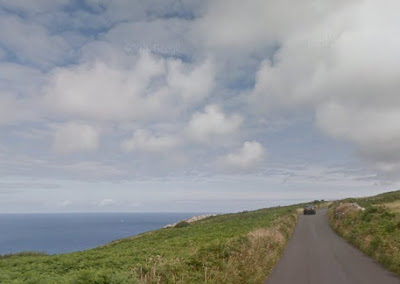 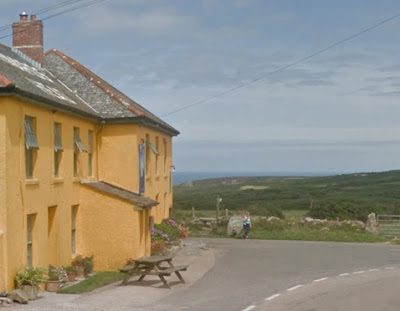 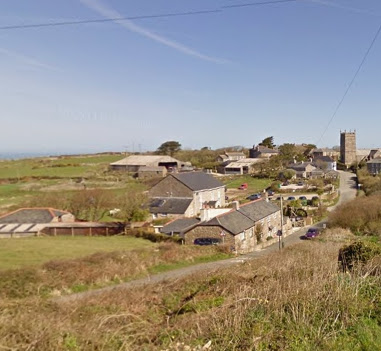 There are sea views almost all the way and the double route trip terminates at the cliff top bus station in St Ives. 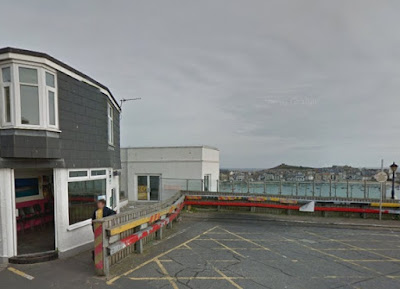 But the circular bus fun is not yet over. At St Ives the hardy open top explorer can change buses (yes, really change this time!) to the A2, formerly the summer only 17B ... ... for more views, including the mysterious and glorious St Michaels Mount. 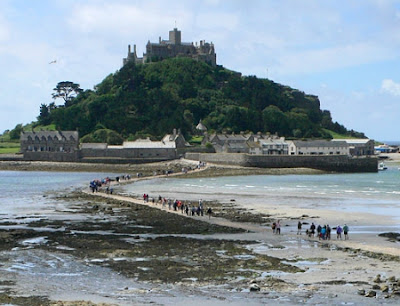 First Bus kindly provide those who wish to do the full round trip with a combined summary timetable. 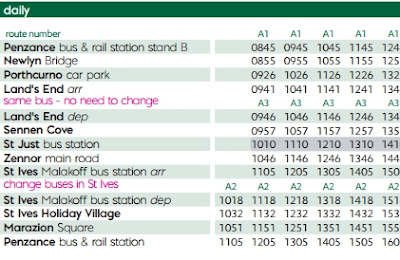 Which leaves us with the question, "why A?"

The answer sort of began with a service from Newquay rebranded last year. 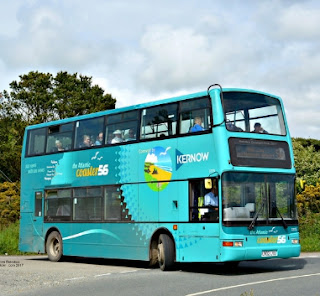 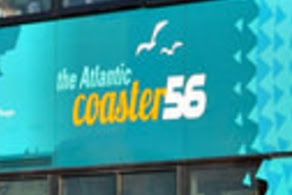 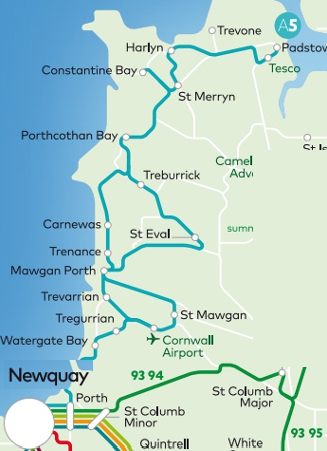 Some journeys on the A4 (formerly 57) will be devoid of top. 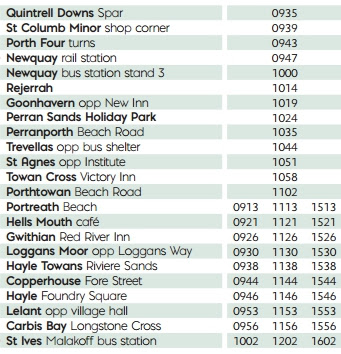 To complete the set of As, the long-standing service 17 between Pendeen, Penzance and St Ives joins the Atlantic Coasters club with the unadventurous name of A17. 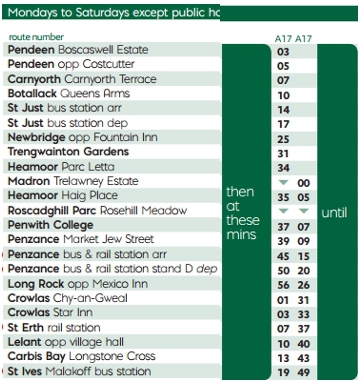 It is not clear how many vehicles will be carrying the new livery. As we saw recently in Weston Super Mare, routes have been publicised at Excel but with little evidence on the road; according to local bus watchers.

The First Kernow Facebook page has pictures of two. One an open top double deck ... 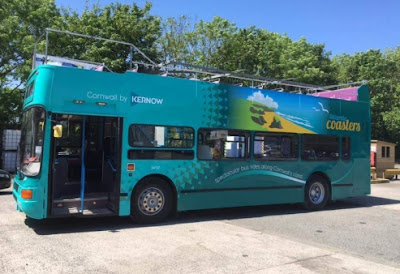 ... which presumably cannot be used on service because you have to climb a step!

The single deck is equally intriguing because it appears o have a map witb only the A5/56 from Newquay and the A3/300 from st Ives. 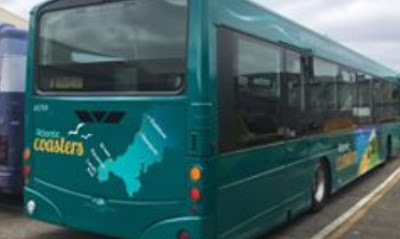 A work in progress,

Picky thought; have the stops been re-branded or do they still show 300? 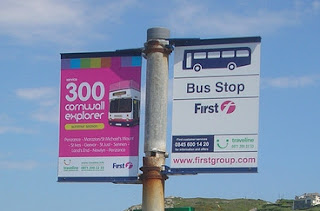 fbb would like to publish pictures of Atlantic Coasters happily coasting plus any other local publicity.

This batch of newly-promoted Open Top and associated services represents a significant act commercial bravery, most notably with the dramatic expansion of the 300/A3. It deserves to do well.

Next Nottingham blog : Thursday 1st June
Posted by fatbusbloke at 02:00