This blog has often commented on the consummate skill of PR people to present bus service reductions as an "improvement"; the most appalling example of omnibological newspeak being the Sheffield Bus Partnership's new network.

Back in 2012, fbb reviewed the major network re-jig of First's services in Norwich. Then it did appear that "adjusting services to meet customer needs" did not necessarily mean "bus cuts"!

Just over a year ago, fbb was (virtually) back in the City of mustard and canaries to report on a new service as part of First's Norwich business. See:-

This was, indeed, an improvement; but in essence it was a return to a route previously abandoned in order to tickle the toes of a competitor. 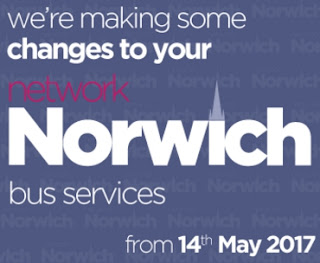 But this weekend, the changes do look like genuine improvements.

From Sunday 14th May, we’re making a number of changes to some Network Norwich bus services. These changes have come about as a result of our ongoing review of demand & usage, passenger suggestions and through our ongoing partnership with local stakeholders. We will be adding extra buses and routes onto the network, and brand new connections across the city.

Three services get a make-over. fbb will review them in order of perceived significance. 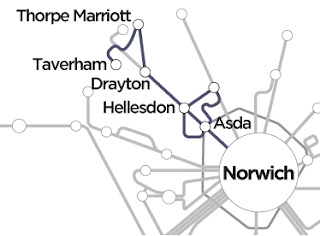 Hitherto the 30 and 30A terminated in loops at Hellesdon ... 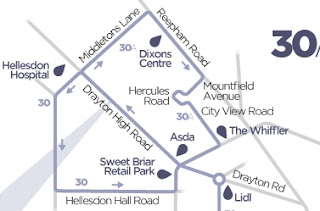 ... but, from this weekend, certain journeys are extended to Thorpe Marriott and Taverham to augment the 28 and 29. 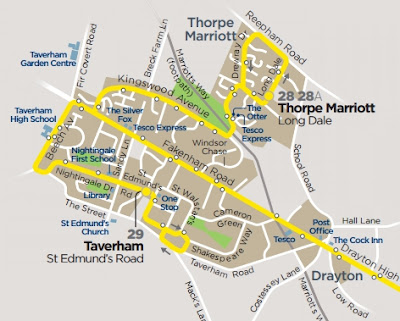 Our clever readers (aren't thy all?) will be able to superimpose mentally the 30 on the 28/29 and note which roads now get a bus service. 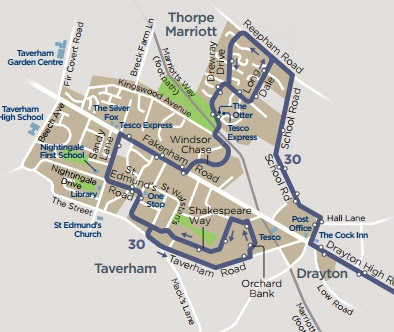 Norwich experts will be able to remember which of these bits of roads were, at one time, served by First and its predecessors. The extended 30 runs every two hours; the 28 and 29 each run every 30 minutes, so this is intended, as it says on the tin, to serve parts that other buses don't reach. 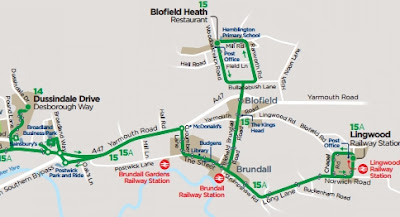 Services 14, 15 and 15A provide a 15 minute frequency from Wymondham via the city centre and along the Yarmouth Road. 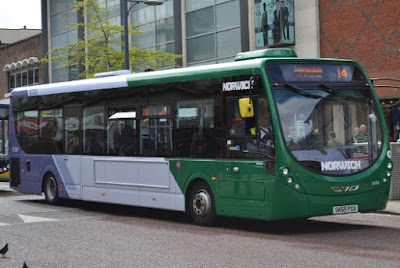 The revised service removes the 15 from Blofield Heath and sends it along the main A47 to Acle. 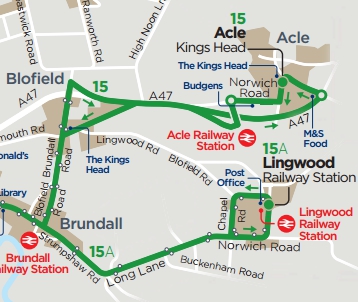 "Why?" you may ask. A few months ago, GoAhead's Anglian Bus withdrew its competing service between Norwich and Great Yarmouth. Whereas First's X1/11 route runs fast to Acle, Anglian's 7 ran via Yarmouth Road.

The new 15 allows local passengers to change to the X1/X11 at Acle and speed onwards to the seaside. The connections work reasonably well in both directions. 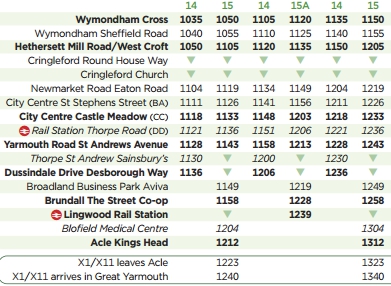 "What about Blofield Heath?", you may ask.

Unfortunately, providing these new connections will mean that our buses will no longer be able to serve Blofield Heath.  Whilst it is regrettable to discontinue any part of a service, a recent review of passenger numbers has shown that only around 20 passengers per day (and frequently less) use our buses to & from this point, leading us to have to take this difficult decision.  Blofield Heath will continue to be served by the Konectbus 5a which runs around hourly Monday to Saturday. 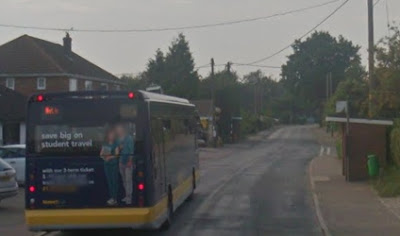 First are thus content to lose their few Heath customers in favour of (hopefully?) more to Great Yarmouth!

(Refer back to the "Poringland" blogs via links above. 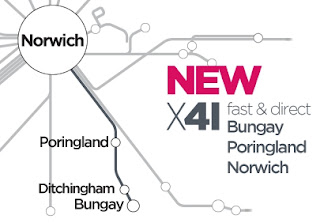 This is another "turning the clock back" to return to Bungay, a town abandoned by First in the "retrench wherever you don't make a packet" past. 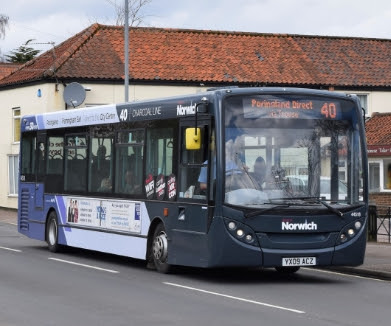 The X41 runs hourly in addition to the existing half-hourly 40 to Poringland. 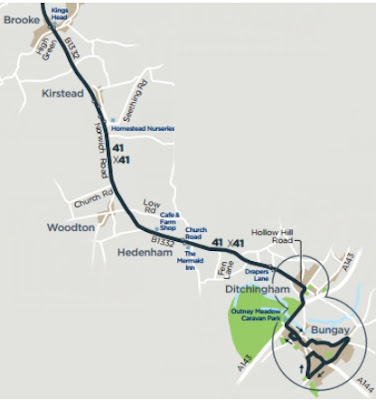 The leaflet helpfully includes a detailed map of Ditchingham and Bungay; which is good because things do get a bit wiggly. The old service 40 timetable leaflet left something to be desired as it did not contain a timetable! 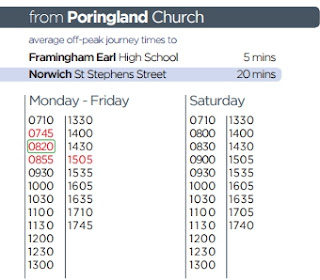 Thankfully the new 40/X41 publication now tells its passengers when they will get to their desired destination. Departures lists are still here for regular travellers, but full timetables provide extra confidence for those new to the journey. 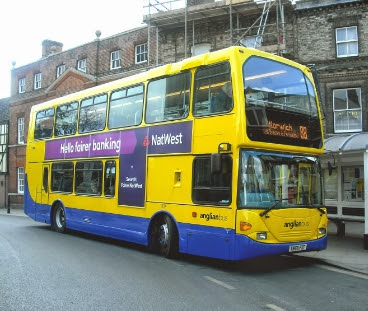 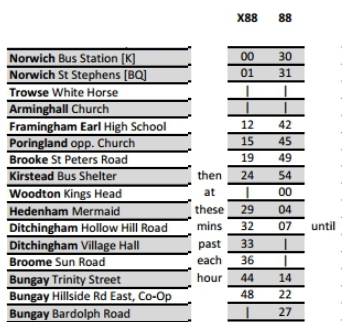 ... and so it will be interesting to see if First's X41 is successful enough to match that at some future date.


Superb Sidmouth blog : Saturday 13th May
Posted by fatbusbloke at 02:00