There are many times when a 2017 reader has to marvel at past technology, A perusal of the mechanics of the Lynton and Lynmouth cliff lift us one of those times. Pre-fbb (aged 10) wondered why there was a swooshing noise when the car stopped at the bottom, replaced by a more measured gurgling at the top.

At the top, the driver tops up a tank located below the passenger accommodation by moving a splendid and beautifully primitive lever valve. 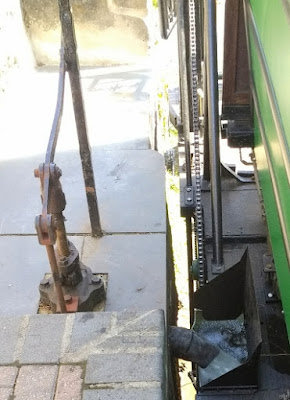 See the gurgle, lower right. Thanks to Newtonian physics, the carriages, joined by two wire ropes, transfer from top to bottom and vice versa. This liquid make-weight ensures that the descending car is heavier than its ascending mate. Once at the base station, the tank is emptied ... 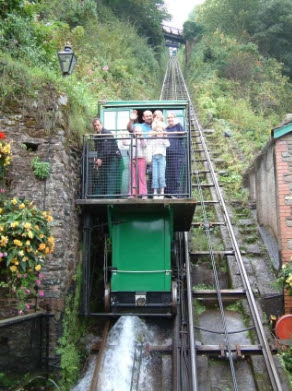 ... as seen here as the car is nearing the bottom. Usually the purging process is hidden, carried out when the car has stopped.

But surely there are other similar cliff lifts worked by water. Correct; the Saltburn version is water powered ... 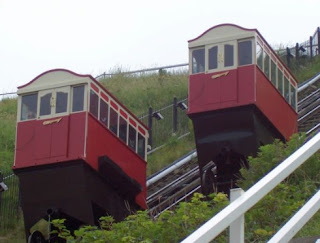 ... as was the now closed Leas lift at Folkestone. 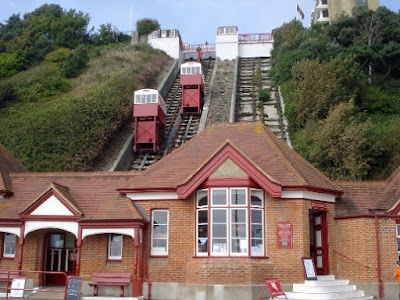 Both of these use/used recycled water pumped from bottom to top.

The Lynmouth beauty has an open supply with permission for ever to draw water from the river Lyn about a mile away and discharge it into the sea.

Not only that, but the braking systems are also water operated.

Each car has two sets of brakes which are water operated. The ‘governor’, which in turn, is driven by the main wheels operate one set. 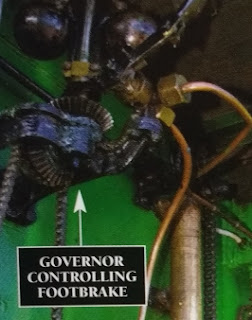 These brakes have shoes which press down on the top surface of the rail and actually lift the car off the rail by 2mm, thereby relying on the weight of the car to give maximum friction between the rail and the brake shoes.

On this railway, the other set of brakes are permanently on - operated by a large water accumulator via the drivers hand wheel ... 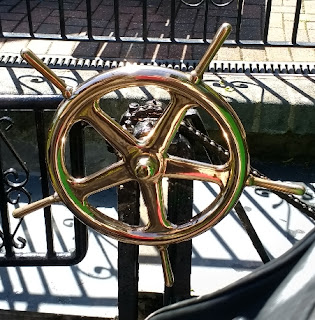 This means when the cars are unattended, the brakes clamp it to the rails making it impossible to move under any circumstances. These brakes are a calliper type which clamp each side of the crown of the rail.

The brakes are held ON by a large lead weight which is lifted OFF by the pressure of water from the "accumulator". 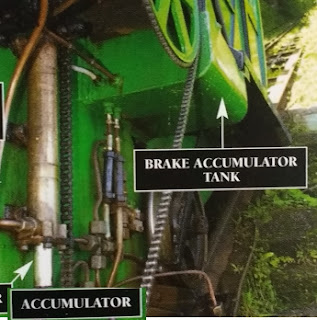 The safety record of the lift is exemplary.

But we should go for a ride. The upper station is approached by a broad paved footway from the main shopping street, 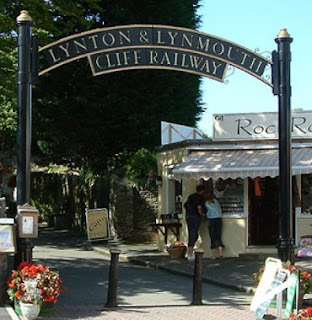 Soon the business end of the operation appears. 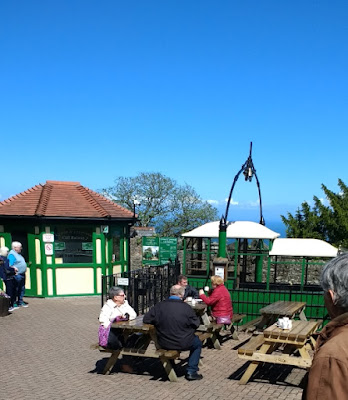 The track is more parallel to the shore rather than at right angles (Folkestone and Saltburn) which comes as a bit of a surprise ...

... but the view eastwards is superb. 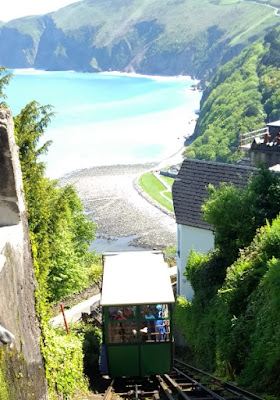 Cunningly the running rails move apart at mid point to allow the cars to pass ... 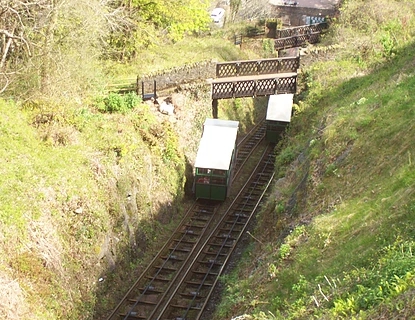 ... but the best ride is up front with the driver on the forward facing balcony. 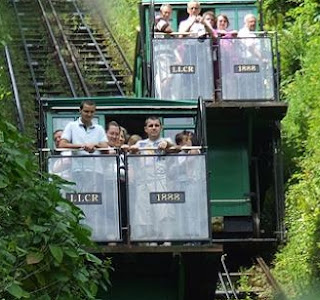 But maybe one bit of the day-to-day operation is electric. To signify "ready-to-depart" a string worked bell was rung. 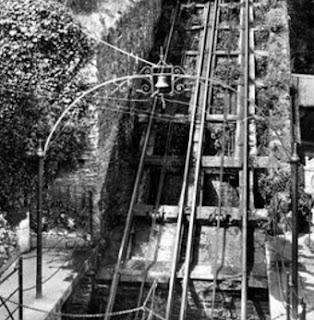 In a sop to modernity, this feature is incorporated into an electrical control system and the bell is worked by wires and a solenoid ... 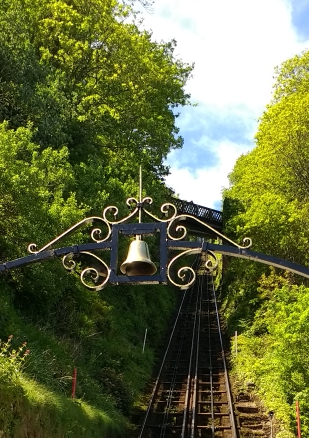 ... see wire approaching from  the right. One ding signifies that the "top" car is ready; two dings from the bottom. Once the dings have dinged, brakes are released and the weight of water does the rest.

The Lynton/Lynmouth experience is not a cheap thrill (£3.80 return) and there's not much to enjoy at the bottom apart from a few tat shops, a car park and the view - so fbb and party quickly returned on high for coffee at the caff. 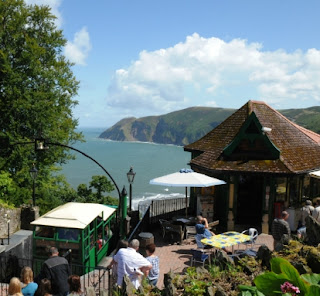 Light refreshment is enjoyed in preparation for the next visit of the day; it, too, would reveal some stunning engineering.