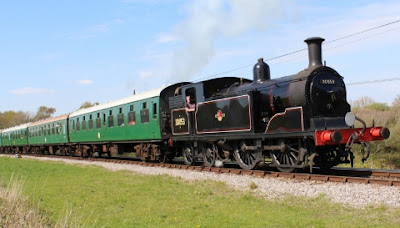 In the upper shot the M7 0-4-4 loco is dirty (typical) and the coaches look as if they had been painted yesterday. Below we have a ridiculously clean engine and coaches that have been around for a few years. In the upper picture the grass is a very cheery spring green but below the verdure is more bleached and summer-like.

The top train is pictured approaching the now closed Sidmouth station whilst the bottom consist is on the preserved Swanage Railway.

Both pictures are full of nostalgia and gloriously evocative of a bygone age, although you might quibble with the more modern carriages on the Swanage line.

But the big difference is that the upper picture is of a model built to a scale of 4mm to the foot and the lower illustration is of a full-sized 12 inches to the foot train.

But it is not easy to tell the difference at first glance; indeed had the Railway Modeller photographer turned the volume on the green colour down a bit in his Photoshop, it would be even harder to tell which was which. 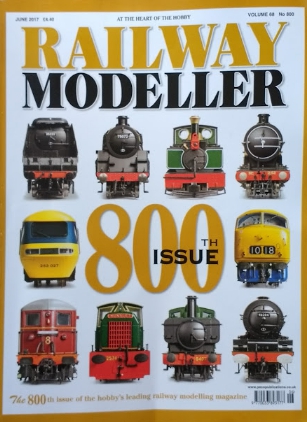 To read all about the model, fbb strongly recommends that you nip out and buy the 800th edition of Railway Modeller. For £4.40 it will provide you with hours of nostalgia and delight even if you are not a railway modeller.

The Sidmouth layout was built by one Richard Harper ... 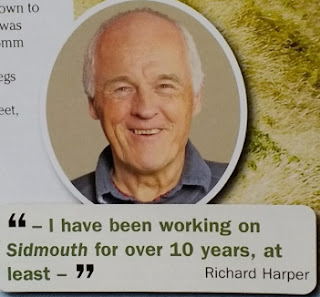 ... who is a member of the Leamington and Warwick Model Railway Club.

The Leamington & Warwick Model Railway Society has members from Warwickshire, Oxfordshire and much further afield.

We have seven club layouts in various stages of construction in N, OO, EM, P4 and O gauges with club layouts regularly appearing on the exhibition circuit and in the modelling press.

Visitors are welcome to come along to our club night on any Thursday evening from 7:30pm. You will be guaranteed a warm welcome with plenty of interest for all levels of modelling skill or just the opportunity to chat with members or browse the extensive club library.

So, why does Mr Harper's model train look so real? One reason it that he is a very dedicated and skillful modeller whose efforts put fbb's modest and poor quality offerings into the depths of shade that they deserve.

Here are the remains of Sidmouth Station today. 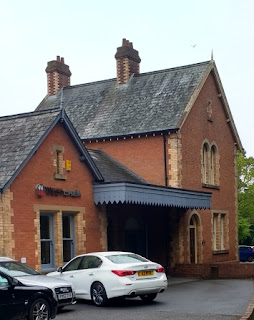 Here is the same building when it was bustling with activity NOT. 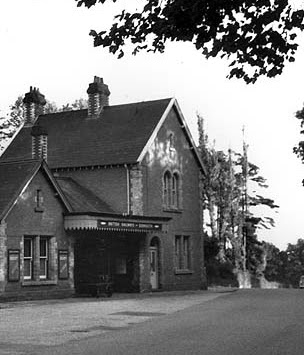 And here is Mr H's model from a similar angle! 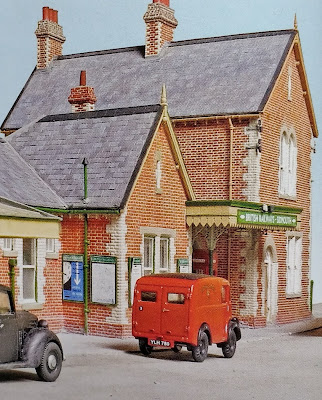 The station buildings still stand on the outer (road) side of the site; which is where fbb sloped off to yesterday morning. A trip to the tip with Mrs fbb (unfortunate phraseology!) followed by a modicum of retail therapy and a Pensioners Special ... 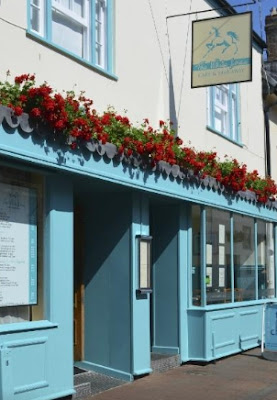 ... at the White Horse caff in Fore Street ensured that both parties were provided for. (fish, chips, mushy peas in modest portions, bread and not really butter plus a cuppa for £5.75)

But there is another reason why the model looks so much like to real thing. It is EXACTLY like the real thing.

When 00 gauge "toy trains" were invented in the 1930s, manufacturers had a problem. Although the trains themselves were to a scale of 4mm to the foot (1:76), the connecting rods and valve gear (bits taking power from cylinders to the wheels) ... 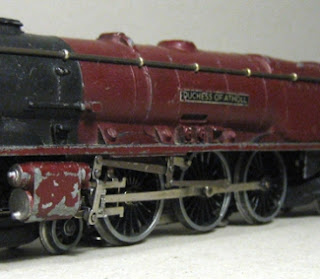 ... were much too bulky, sticking out in an ugly and noticeable way.. It was decided, therefore, to make the track gauge (the distance between the rails) narrower than it should have been. 16.5 millimetres was chosen.

That works out at a gauge of 4ft 1½ inches, about 7 inches less than proper scale.

Keen modellers were not satisfied with this unrealistic compromise, so started making models, still at a scale of 4mm to the foot but now with gauge of 18mm. You can see the difference in this comparative shot. 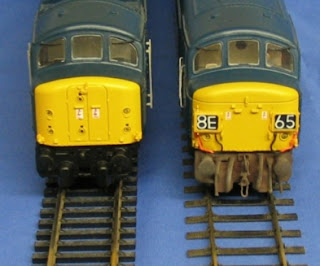 ... and on the right, EM gauge (Eighteen Millimetres, clever name, eh?), nearer to accurate scale. But 18 is still not quite right. EEM (Extended EM) was developed at 18.2mm.

But it was still about 1.9 scale inches too narrow.

So enthusiasts created Protofour or P4 ... 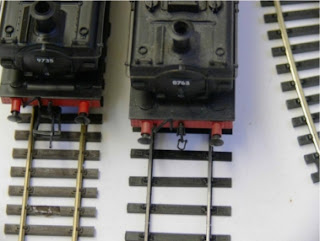 18.83 millimetres! And you cannot really tell the difference between P4 and EEM without a ruler.

Richard Harper's layout is built with a track gauge of exactly 18.83 millimetres, correct scale for the full sized gauge of 4ft 8½ inches. All the track and pointwork is hand made with near-scale height for the actual rails.

Combine this with the superb skilled scenic modelling and you have something that looks right; far righter (?) than fbb's puny (but enjoyable) model. 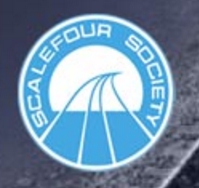 It has to be accepted that P4 is not an out-of-the-box concept. Kit-building is probably the commonest approach, although most proprietary locomotives and rolling stock can be converted to P4, some more easily than others. In particular, the conversion of ready-to-run diesels is made easy by commercially available 'drop-in' wheelsets. Plain track can be bought, but pointwork falls into the d-i-y category, although kits are available for the more common items of pointwork and parts for several established track construction systems are available from both trade suppliers and the Society's own Stores.

fbb is filled with admiration at the skill of P4 modellers.

What is more, Richard Harper set out to model Sidmouth Station in full, 1:76 of the size of the real thing with everything included. Even some of the best models are "compressed" versions of the real world, but not so for Mr Harper. Tomorrow we will take a more detailed look at Sidmouth then, Sidmouth now and Sidmouth modelled.

Until then, here is a map extract showing that the station was almost in open country when it was built. 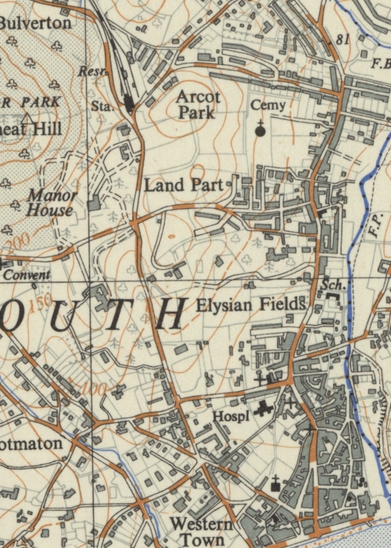 Later the town spread to meet it; but it was a mile from platform to sea front and a tiring uphill walk for your home train.

Even today, the station remnants are on the fringes of the resort ... 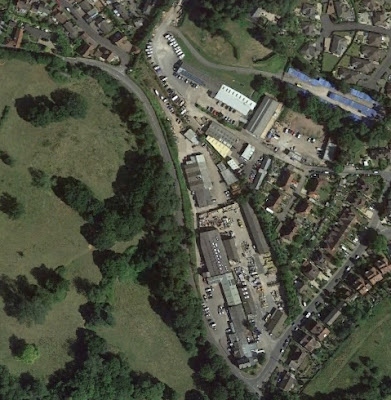 ... being where Sidmouth becomes its "suburb", Woolbrook.

As well as the station site with its few remaining railway buildings, it is just possible to trace the line's approach to its terminus as marked by the edge of housing blocks on this aerial view (per Google Earth). 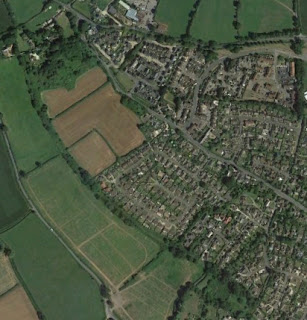 If you are brave enough to drive down the appropriately named Dark Lane ... 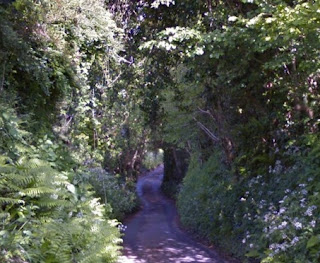 ... or Ice House Lane, you will find one of the remaining bridges under the old line. 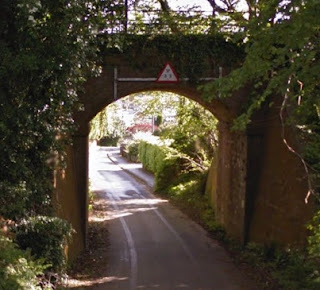 
Next superb Sidmouth blog : Sunday 14th May
Posted by fatbusbloke at 02:00