When fbb wrote about forthcoming changes at Weymouth, he referred to the innovative service 5 to Dorchester via Crossways. 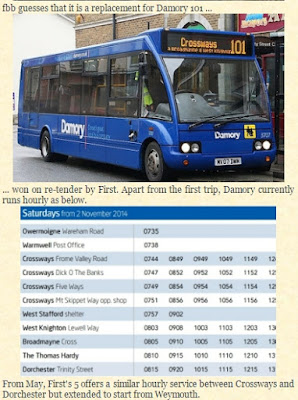 But, as often happens (the key phrase these days is that it is "age related"!) fbb opened his laptop and put his foot in it. 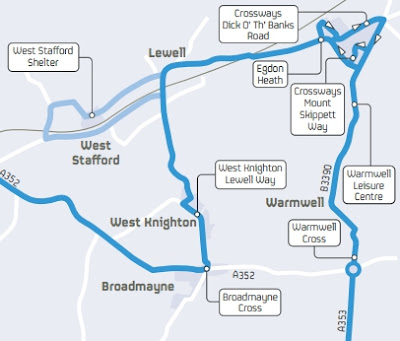 In actual fact Damory's service 101 is still running, approximately every hour and supported by Dorset County Council! It will continue to run until the contract runs out later this year. First would then take over with its 5, but commercially with a dribble of support for carrying school kiddies to and from Thomas Hardye School in Dorchester. But, for practical reasons First decided to start the 5 early to match their summer season start date.

So currently, the residents of Crossways, West Knighton and Broadmayne have TWO hourly services into the county town.

The section from Weymouth through Warmwell has not had a proper bus service for many years, so this is completely new.

So having enjoyed a break, some refreshment and a necessitous PNB, fbb tottered round to Kings Statue stop K1 ... 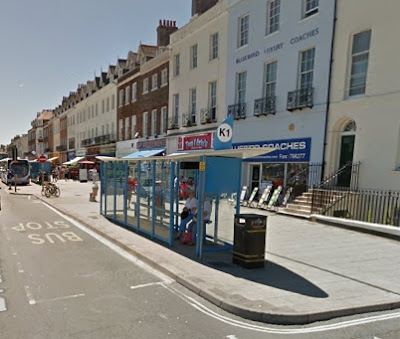 ... to join the 1435 departure to ride  all the way. The only evidence for the 5 was via Dorset County's electronic screens.

The stop is shared with service 4 to Preston, running every 20 minutes. 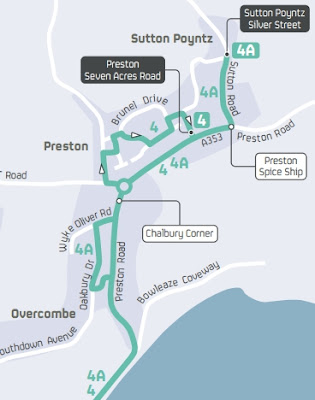 Three passengers plus fbb boarded, all on OAP passes. Not bad, thought your author, for only the fourth day of operation and at a quiet time of day.

In conversation with fbb, one gent explained thet he could use the 4, but felt that new services "needed a bit of help or they won't last".

A couple were returning to Seaview Holiday Park ... 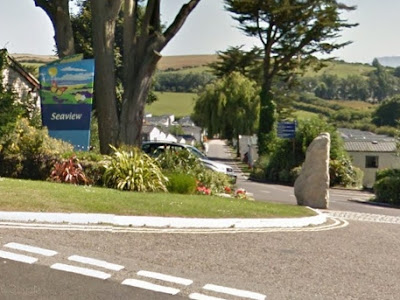 ... but were advised by the driver of the 1440 service 4 that the 5 would be better as the park was a couple of stops beyond the end point of the 4 (near Preston Spar). 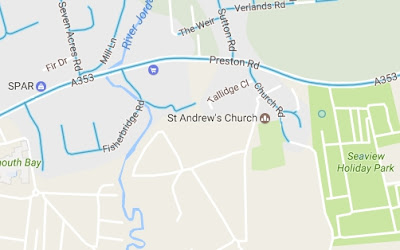 Unfortunately they missed the stop completely, but fbb was able to advise that there would be a 5 back towards Weymouth after a not-too-long a wait. 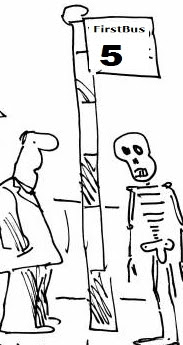 Thereafter, and once again, fbb was left alone for another taxi ride. The vehicle was WX06 OML ... 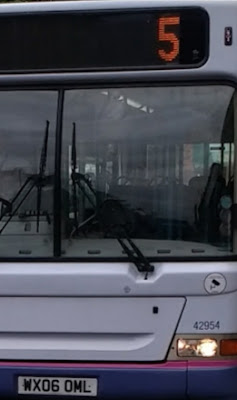 ... having operated previously in Southampton ... 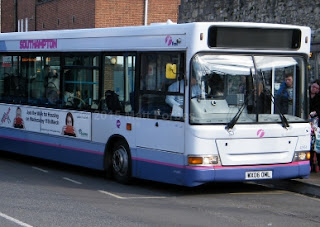 ... and before that in Bristol. 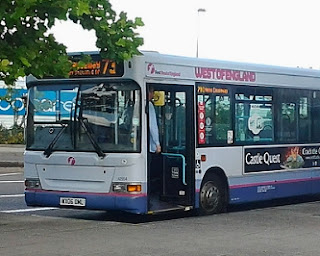 The bus was fitted with First's patent vibro-massage which operated vehemently when the engine was idling. Apart from that, fbb's ride was pleasant and uneventful all the way to Warmwell. But at the Holiday Park (a k a Chalet Site) ... 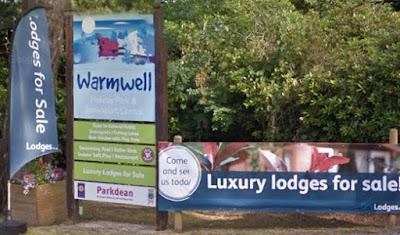 ... excitement nearly overwhelmed your chubby and, by now weary author. The bus pulled into the the reception area ... 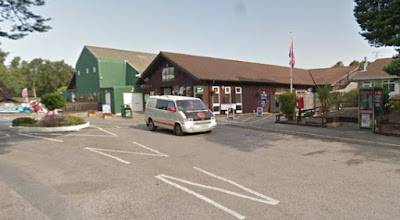 ... gyrated round the roundabout and stopped at a shiny stop by the phone box; Where, -- wait for it -- a passenger boarded. He showed his return ticket, paid for earlier with money (!) and settled down for his ride home.

That was until he realised he was going the wrong way. He wanted Weymouth and not Dorchester. Just as he rushed forward to alight, his bus home (showing a helpful 4A) passed at speed in the opposite direction.

Whoops - another hour to wait.

From there into Dorchester, fbb was the lone stranger on the bus.

The villages of Warmwell ... 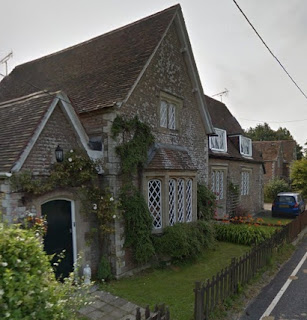 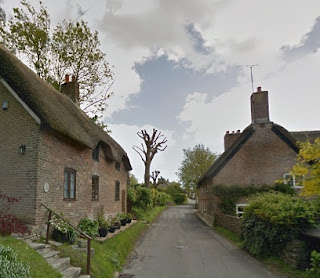 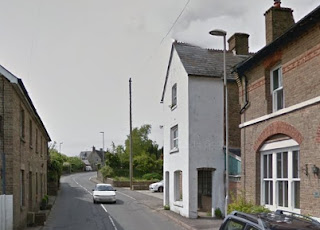 ... had a significant sprinkling of bucolic beauty and quirky quaintness. This was virgin territory for fbb and most enjoyable; a route positively recommended by the chubby one. 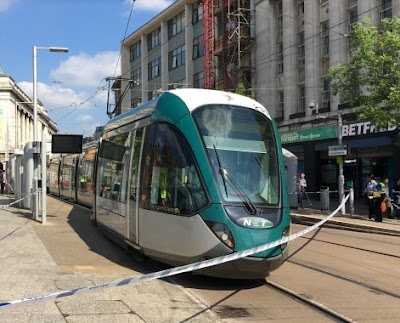 That tram should not be on the pavement!

One of the forums provided this photo after the event. 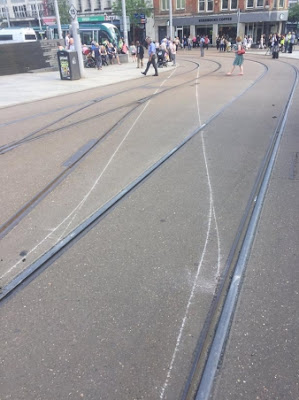 Nottingham Express Transit reported that a tram has become derailed whilst moving slowly. There were no passengers on board. This suggest that a "light" tram was reversing at the crosover when something went wrong; possible the points had not locked into place and a blade moved as the tram crossed over.

The derailment occurred at 1530 and all was clear and working normally by 2140 in the evening. The tram moved away under its own power. 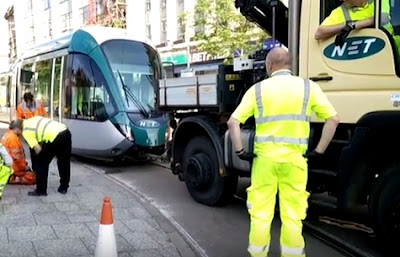 Looks a bit like problem on fbb's model railway; bit a bit bigger and no giant hand to lift the wheels back on the track.