As the fbb party parked their limo prior to exploring his delightful little bit of the Lynton and Barnstaple Railway (L & B), the old bloke noticed some miniature railway track alongside the visitors'  motor vehicles. A note on the web site for 2009 refers.

A new miniature railway has recently been constructed at Woody Bay Station. Built to 7¼ inch gauge, it is about 140 yards long, end-to-end. The line starts beside the entrance drive near the car park, crosses the upper station lawn, and runs into the trees at the Lynton end of the site. There is a possibility that further extensions to the line may be added at some time in the future. 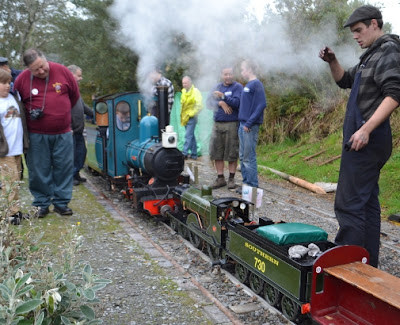 The new miniature railway will not see regular operation at present, mainly because no locomotive is resident at Woody Bay. It is hoped that the line will be in operation during the annual Steam Gala when visiting engines may be available.

The Gala is usually held in September; the picture above comes from the 2013 event.

Spending a Penny
Of course the station has fine modern toilets, but fbb could not help noticing something a little more antique. 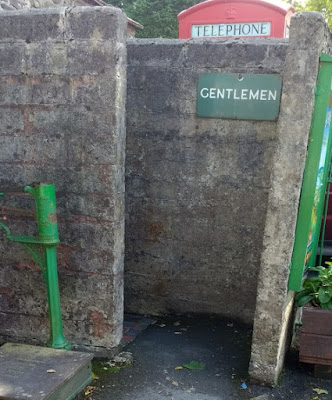 fbb expected to see a wooden door blocking his entrance, but was overjoyed (!) to see that all the accouterments were in place, in working order and plumbed in. 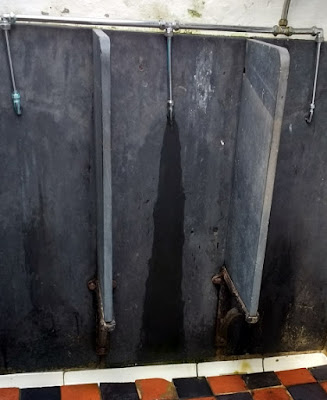 But, not only were the "facilities" appropriately heritage, but the good folk of the L & B had managed to re-create the oft remembered foul stench of the originals. Very clever. So much so that fbb felt he should try the heritage version out for himself.

Superb Sandwich Service
There was a caff, and it too was delightful. It spread over two rooms of what was, presumably, the stationmaster's living accommodation. One of the rooms was kitted out with a selection of older furniture ... 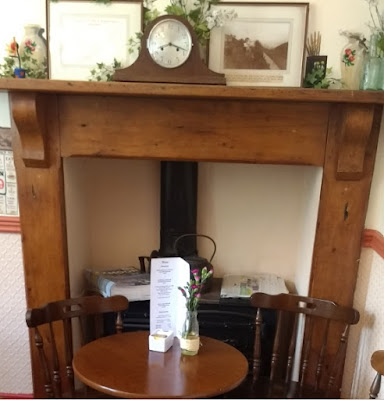 ... plus a set of sprung seats from an old (main line?) railway carriage. The (volunteer?) "dear ladies" were outstandingly friendly and helpful and rushed in after the fbb party had consumed their comestibles to clear and tidy. 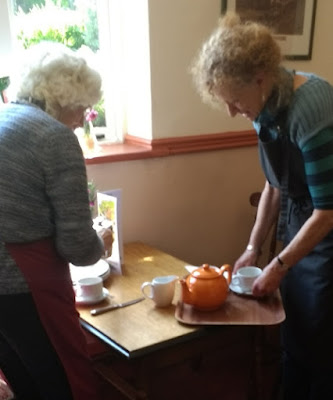 The menu was surprisingly extensive for a small establishment ... 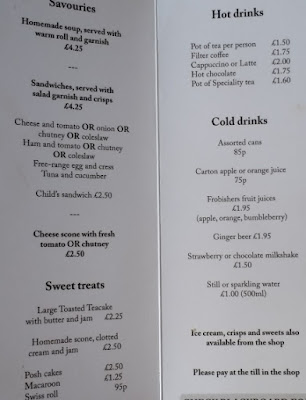 ... fbb was particularly impressed by the heading "Posh Cakes" (bottom left). The menu cover was adorned with a reproduction of a water colour painted by a L & B member. 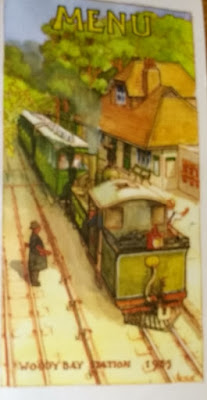 The fbb party had a toasted cheese and ham sandwich each which came with a small salad garnish and a sprinkling of crisps; plus the traditional "pot of tea for three". It was yummy and very good value.

And fbb left his L & B guide book beside the chair, silly boy. Not to worry, one of the caff ladies sprinted up to the car park and returned to booklet to its forgetful owner. Excellent service indeed!

Extension Plans
The fbb's chum Julia asked whether the line would ever be longer and, of course, there are plans for the future which may well, eventually, bring trains all the way from Lynton to Barnstaple. 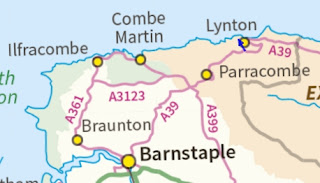 Large sections of the trackbed are undisturbed apart from their return to farming use but many bridges are gone. Rebuilding the whole line is an enormous and expensive task. After 82 years, all the track would need to be bought and rebuilt; a mammoth task.

Nevertheless the L & B is "up for it", however long it takes.

The line would have to terminate on the outskirts of Barnstaple because roads and modern buildings have destroyed the original. 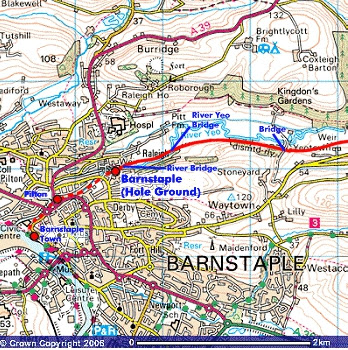 At the Lynton end, the approached to the station have been built on, so the proposal is to route the line behind the new houses and round to a new terminus, still on the top of the hill but with the possibility of car parking and adequate access for all. 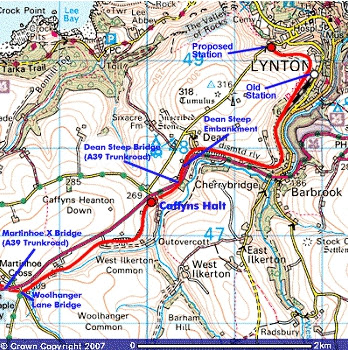 The new Lynton station would be in the scrubland (left on photo below) slightly nearer the town and just off Station Avenue in Lydiate Lane. 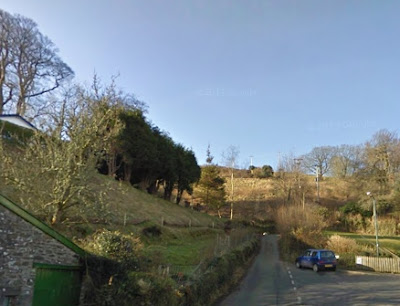 But the first "push" is south west from Woody Bay to Blackmoor Gate where a new depot would be situated.

It will be a big task, but this big-hearted little line will surely succeed.

Making Models
Those that might wish to re-create he line in miniature can now do so (at a price).  Wagons, coaches  and track are made by Peco ... 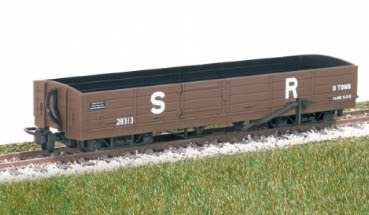 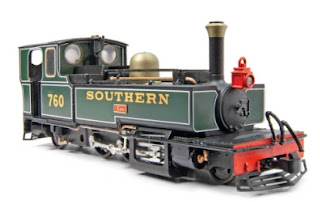 ... and Bachmann's model of Woody Bay station, although no longer in production, can still be bought on-line.

But far better is to organise a visit to the line. The L & B web site is (here)

Yesterday fbb went on a mammoth bus expedition to investigate two of the three brand new services introduced by First Bus at Weymouth on Saturday last. This involved over six hours of bus riding and much to interest our readers (?). The plan is to publish blogs tomorrow and Friday.

Next Weymouth blog : Thursday 25th May
Posted by fatbusbloke at 02:00