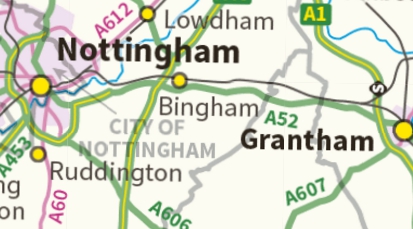 Bus operation in and around Nottingham has always been cited as an example of privatisation and "competition" that works well. Trentbarton has protected itself from the onslaught of the big groups whist Nottingham City Transport remains under the ownership of the Council, even if it is "at arms length".


Both companies have a reputation for good marketing, investment in new vehicles and expansion of services and frequencies.

Whenever fbb has visited he has always been impressed with both operations.

But news is breaking that even the Trentbarton "magic" has its limitations.

The local press has revealed significant cut-backs in several services due in July. 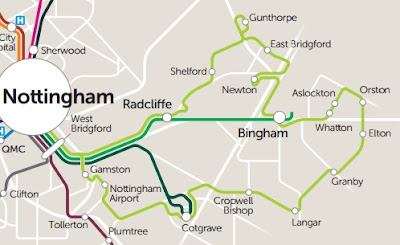 Patricia Price, 76, of Cropwell Bishop, said: "That's a real shame. It's a real issue for the older people." 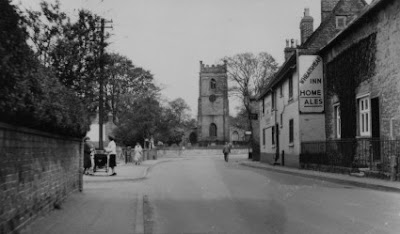 "I had no idea they were cancelling it, we really need that service."


The service in question is part of a clutch of routes branded as "The Rushcliffe Villager" shown as a weedy pale green line on the web version map below. 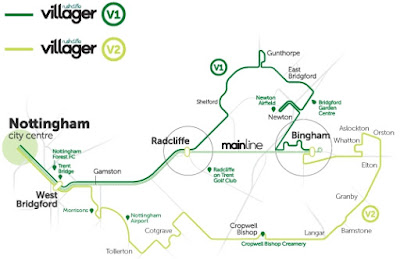 Or you could have pale green on green on your phone! 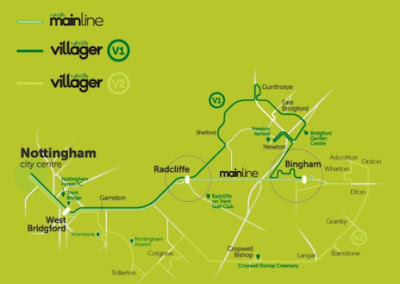 Both V1 and V2 follow a roundabout route between the city and Bingham.

V1 runs via Gunthorpe every hour ... 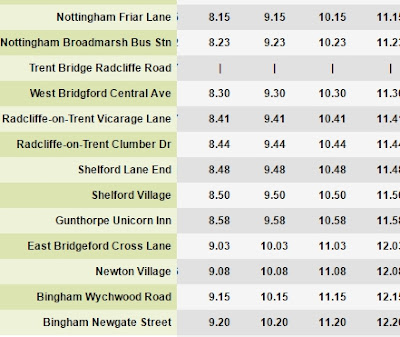 ... and the V2 runs via Cropwell Bishop, also every hour. 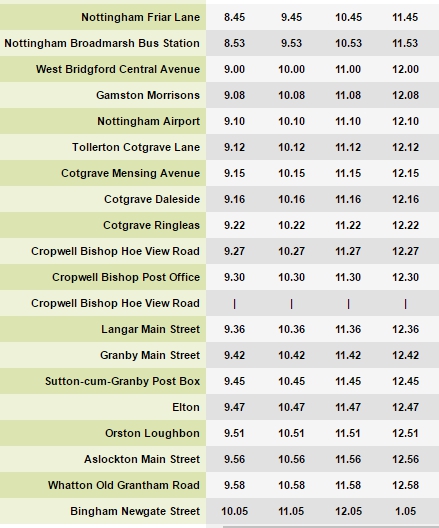 The direct route to Bingham is the Radcliffe mainline running every 10 minutes. 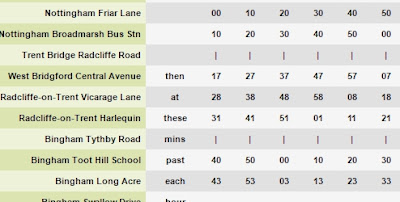 Trentbarton has announced that it is withdrawing the V2 (via Cropwell Bishop) completely. This has, apparently, not gone down well in certain quarters.


Carmen Alonso, 66, of Mapperley, said: "I think it's important because it goes to a lot of villages and these people, elderly people mainly, they can't drive, and how are they going to get about? I think it's disgusting, I'm very cross. It's always the old people that suffer. I think it's going to be quite bad for the old people because that's the only way for them to get about, and if they take that away from them you'll see old people just sitting in the house not able to go shopping, not able to visit relatives , I'm quite disgusted and very upset. I understand it costs a lot of money to run an empty bus but to cut it completely is a bit much." 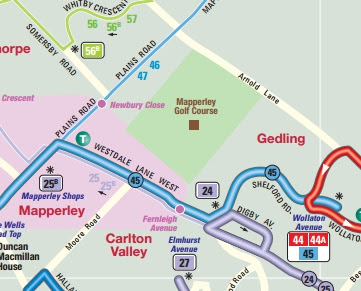 Quite why Ms Alonso should be so upset is unclear. She lives in Mapperley which is unaffected by the withdrawal and is a city destination with plenty of Nottingham City buses. The 45 runs every ten minutes ... 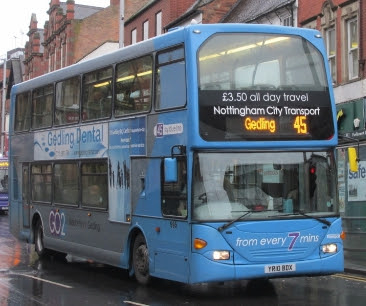 She has a right to her opinion, but a bit more vox pop from the villages which are losing their bus might have been more representative.

Of course, what matters in this harsh commercial world, is whether there are enough bums on seats to give the company a reasonable profit. If not, no-one owes Trentbarton a living and the route must go.

From an outsiders view it has nice shiny buses ... 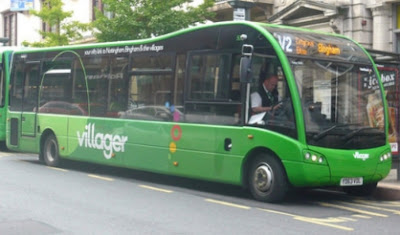 The Mango fare card system offers good value for money and the harshly treated "old people" have their passes. Perhaps that, in the end, is the problem. As local authorities cut back on their reimbursement, more routes will, inevitably become non viable. Recently fbb heard of one County that pays a flat rate of 92p per "senior"; hopelessly inadequate.

Are there any other services to these villages, taking Cropwell Bishop as an example/

... and there are a couple of shoppers return trips. On Thursdays, you can go to the Downtown Superstore at Great Gonerby. 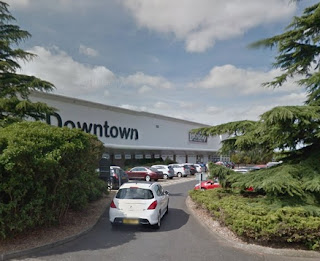 And on Friday, you have choice ... 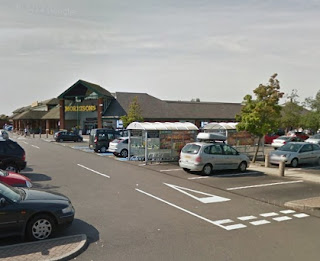 ... or ASDA at West Bridgford. 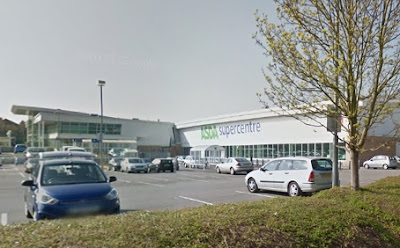 Other villages facing the withdrawal of the V2 are less fortunate.

Part of the V1 and V2 network already receives some support from the authorities, but how much is not revealed. One easy solution would be for the local authorities to put their hands into their corporate pockets and support a little more. 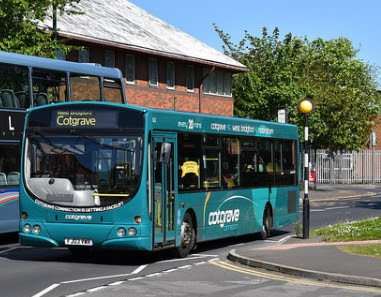 Could Trentbarton be "persuaded" to serve the route in a more cost effective way. Just down the road from Cropwell Bishop is a twenty minute service to Cotgrave, also on the V2 route. 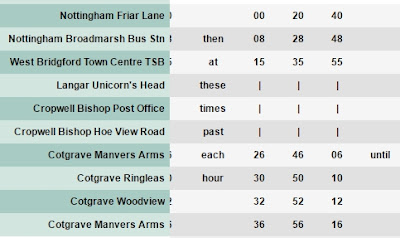 Could something be cobbled together riding on the back of the Cotgrave service ...

... where improvements are due in the near future. 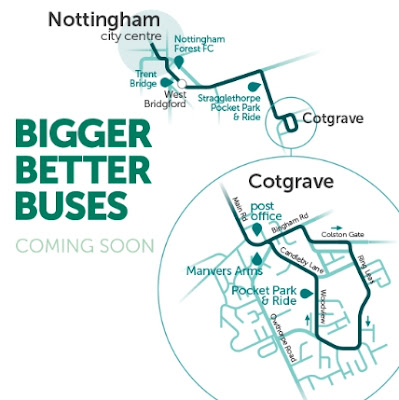 Tomorrow we hear what the Councils and the operator have to say. Will this really be ... 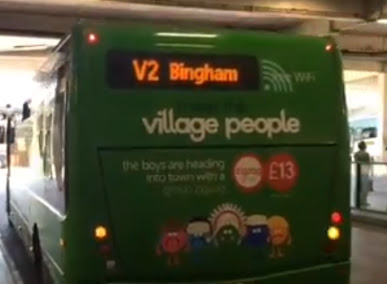 Next Trentbarton blog : Friday 2nd June
Posted by fatbusbloke at 02:00