The Whys and Wherefores of Whiteley (3)

Mr Hammond says there has been no publicity for the W2 between Warsash and Whiteley. 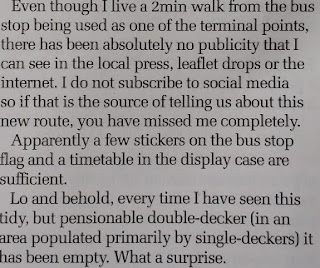 Clive, who has visited Whiteley, says there is absolutely nothing at the shopping areas to show even the existence of buses.

If you can be bothered, there is an entry for the W1 in First's "news" section ... 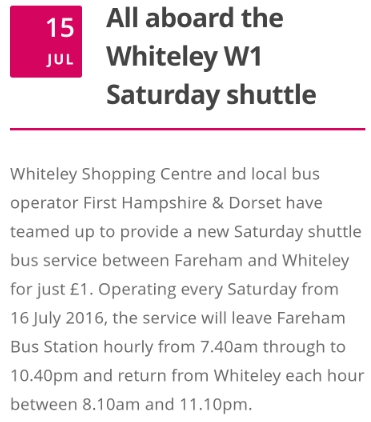 The best that can be found on the Whiteley community pages is this ... 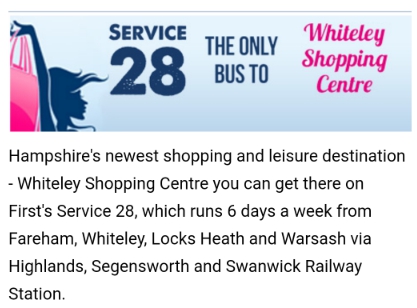 Searching on line reveals the launch of a "Whiteley Shuttle" ... 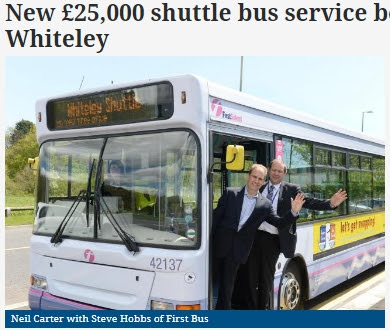 A lunchtime Shuttle service costing £25,000 has begun a one-year pilot trial providing residents with a vital lifeline into the centre of a Hampshire village. Whiteley Shopping has fully funded the service for a one-year trial period run by bus operator First. Eight services will run between 11.50am and 2.30pm on weekdays via the Solent Business Park and Yew Tree Drive using 15 existing bus stops. The service starts and ends at Whiteley Tesco.

And you are right - it didn't last!


Both W1 and W2 are "supported" by funding from the Shopping Centre, so you might expect significant publicity from them. Immediately obvious on line is this uninspiring panel ... 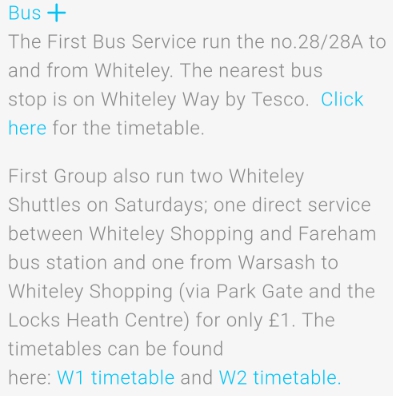 ... printed in contrasting shades of grey on grey. Grey is currently trendy in advertising.

There is a more enterprising page ... 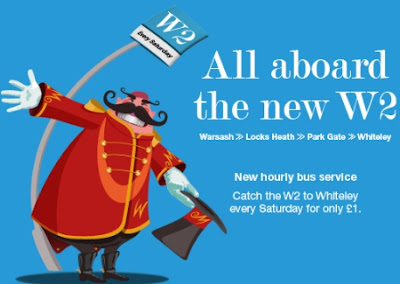 ... which popped up as fbb was searching for "W2"; but he could not find it on the current Whiteley web site.

Recently, this blog took its loyal and avidly excited readers (?) to Rushden Lakes shopping centre. This is not yet "officially" open but some of the shops are already trading.

Local bus operator Stagecoach has announced its service revision from 23rd July. The details are on-line (of course - everything is except when it isn't) but something wonderful is already available. Here is how it arrived at fbb mansions last week - please note OVER ONE MONTH before services start. 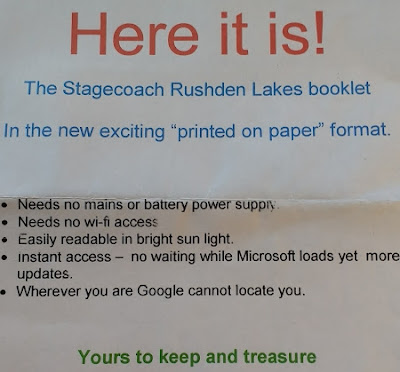 Hmm. Northampton correspondent Alan is such a hoot! But here is the booklet ... 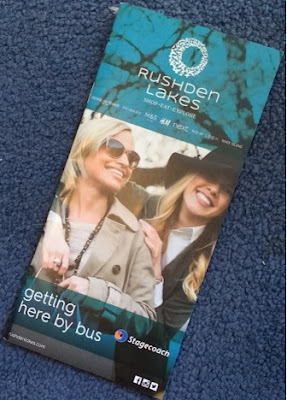 ... 31 pages of the 36 carry useful bus information, the remaining five are designed to make Rushden Lakes look fantastic. (yawn!) There is an excellent route diagram, explaining what runs where with great clarity. 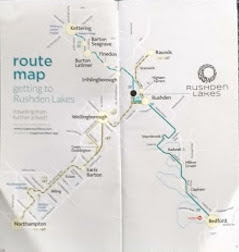 Each locality served by buses diverted to the "Lakes" has a double page spread. Verso shows a departure list, a map of the stops and, wowsers, fares ...

... recto has the return departures all nicely colour coded to match the colours on the map. This does mean that the highly detailed map of the wide selection of bus stops within Rushden Lakes is repeated twelve times. 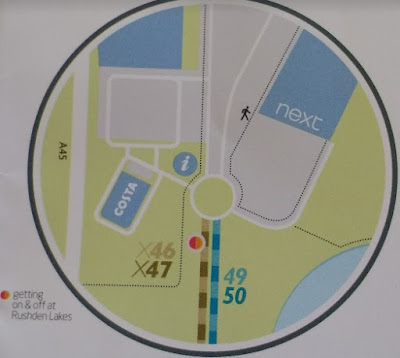 This cartographic overkill ensures, however, that travel options for any particular community are all there on a double spread of open pages.

It is hardly worth asking how this compares with Whiteley.

Why the difference? One possible answer is that it was relatively easy to divert the Stagecoach routes into the Shopping Centre. Through journeys were not delayed significantly and the extra cost is probably limited to the new service 14 covering the bits of X46/X47 lost be the diversion.

Diverting, say, the through buses between Southampton and Portsmouth and Fareham via Whiteley would have an obviously detrimental effect on costs and running time. 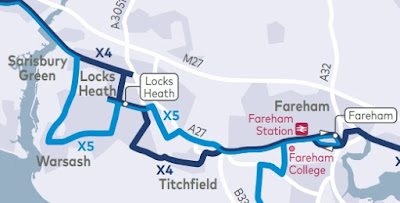 The X5 already wanders round Warsash and the X4 via Titchfied. Whiteley is the grey lump between the A3051 and M27 labels and, realistically, there is nothing else to go that way.

The Saturday only W1 and W2 are, fbb guesses, fairly cheap to provide but, as our correspondents and letter writers aver, poorly promoted. Sadly for the environment and the bus industry, the easiest way to get to Whiteley will always be by car.

A brave bus company might add half hourly buses to the X4 and X5 complex creating a bus every ten minutes between Southampton and Fareham ... 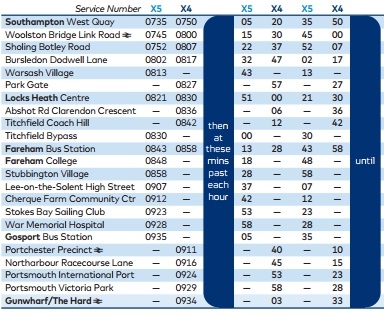 ... continuing alternately via Whiteley to Portsmouth and Gosport.

But First Bus has rarely been brave! 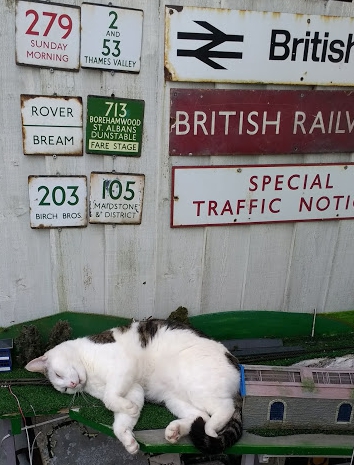