We're In The Money!

Yesterday we looked at service 23, a historic Northampton Corporation route extended to perform a loop in Brackmills at peak times; to which was added service 108 offering a shuttle to and from town at lunchtimes. Both these run Mondays to Fridays only. 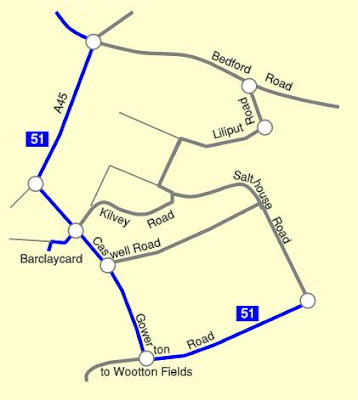 ... with occasional peak hour only trips serving the mega warehousing on Gowerton Road and Salthouse Road. 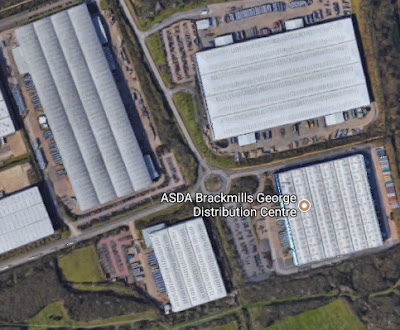 Note how counter-intuitive the road network is. Several of the main thoroughfares turn a sharp 90 degree part way along, often causing a sudden attack of disorientation.

Service 53 performs a similar service but brings in happy workers from the eastern districts of the town. Once again these trips offer peak hours bits and pieces only. 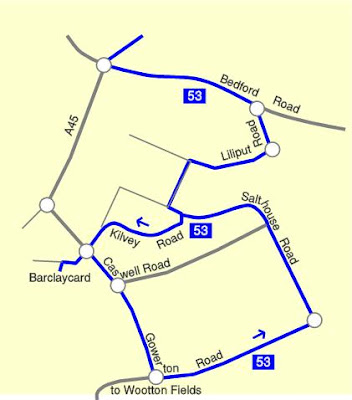 Towards the end of 2016 came a positive announcement from "The Management" ...

... not of a bus company or the local authority; but the management of the industrial estate.

A new Saturday Service, number 51, will commence on Saturday, 29th October for an initial four month trial period. This service will run to and from North Gate Bus Station to Brackmills. The times of these journeys are designed to provide arrivals for 6am, 7am, 8am and 2pm shift starts, as well as 6am, 7am, 2pm, 3pm, 4pm and 6pm shift finishes. 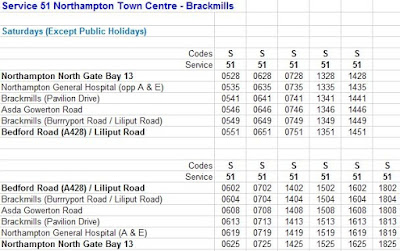 It sank beneath the waves of negligible passenger numbers!

This announcement was an addition to the "big bang" of 2013.

The newly extended bus service – designed to extend transport options, to encourage staff to leave their cars at home and to enable those without their own transport to seek work on the estate – is part of a five year £450,000 investment by the county council into estate bus provision.

To support the new service, the estate, through its Business Improvement District (BID) pot of funding, has invested in new bus stops, signage and an improved road infrastructure. 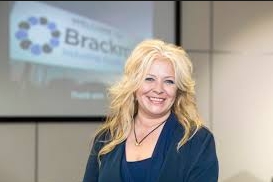 Sara Homer, Chair of Brackmills BID, said: “Since becoming a BID people have been asking us for better buses and more transport options so we are delighted to launch this new service and to be working with the council and Stagecoach to do this."

“We are confident that this extended bus service will help people across the county access employment at our 150 businesses on the estate. Ultimately, our aim is to provide people on the estate with travel choices and options.” 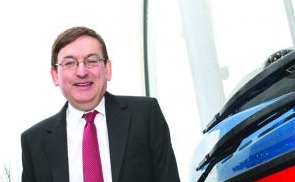 Steve Burd, Managing Director of Stagecoach Midlands, added: “We are delighted to be extending bus provision on Brackmills and to be improving links from the eastern side of Northampton. The future of this service is secure for several years, to allow time for this to develop into a fully commercial service.” 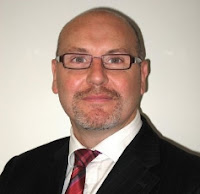 David Farquhar, Assistant Director of Highways, Transport and Infrastructure at Northamptonshire County Council, said: “We have been working with Brackmills for several years in a bid to introduce more sustainable transport. We have come across obstacles, including the withdrawal of Government funding, so this is a milestone and an exciting development.”

We have already seen the magnificence of the 51 and 53 (Big Deal!) but the icing on the cake was the arrival of Stagecoach service 1. Another historic Northampton route reaches Brackmills. 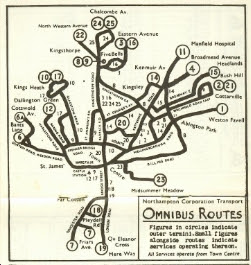 The former Weston Favell (The Trumpet) route was extended into the eastern districts progressively as the new parts of the town developed. It now runs every 10 minutes.

The cunning plan was to extend two buses every hour (Monday to Friday only) from the town's bus station to Brackmills following the 23 route as far as the Barclaycard bus station (a k a Pavilion Drive) ... 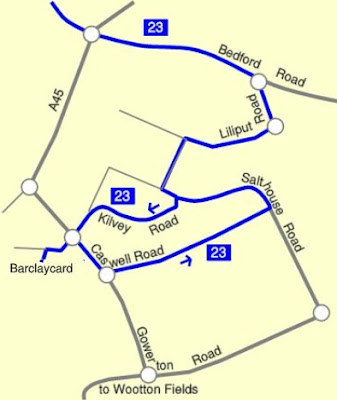 ... but without the loop via Caswell Road.

On Saturdays the 1 was extended only as far as the Northampton Hospital, birthplace of your esteemed blogger!

Which brings us from 2013 to June this year.

From June 10th, service 1 was revised and further extended from Barclaycard via Gowerton Road and Landimore Road (unnamed on map below) to Wootton Fields. 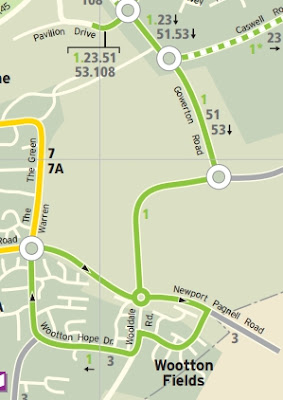 The route is still half hourly but now runs on Saturdays as well. Such was the shock of this development that Gerald was not told and thus, on the first Saturday of operation, the Barclaycard bus station remained locked and barred. 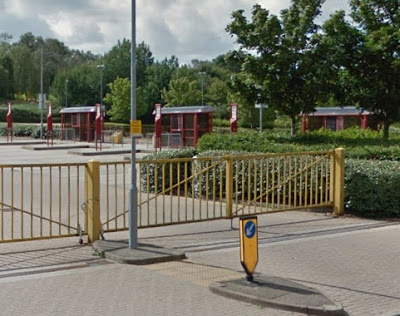 Things were better when our Northampton correspondent took an explanatory ride. 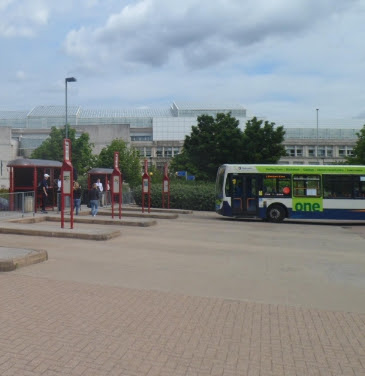 And there were passengers!

Wootton Fields is part of the ever splurging town. 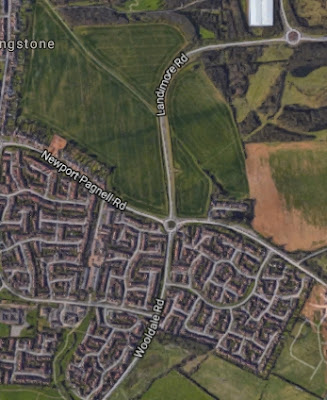 It is already served by route 3, hourly from the town centre via London Road and Wootton Village and, with the new service 1, three buses an hour seems very generous for what look like car owning residences, 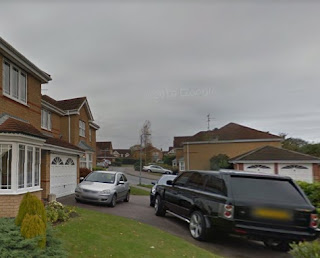 The link via Landimore Road ... 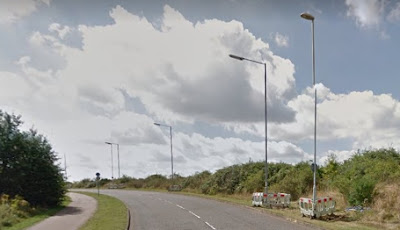 ... is hardly replete with potential custom; just streetlamps and a few bushes. Maybe there is more to come and Stagecoach have been bravely speculative? Or has somebody found yet more cash to support this extension?

There again, the £450,000 improvement fund runs out next year, so maybe this is an attempt to find cash customers to keep the whole service going.

But in true bus timetabling style, route 1 had a few modifications. 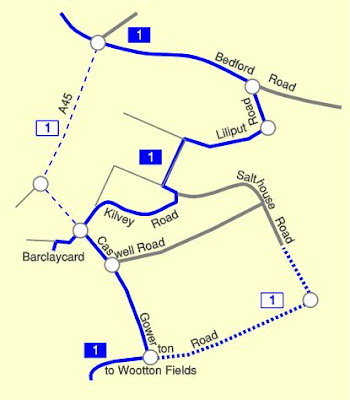 There are journeys to warehouse-land (ASDA, Travis Perkins et al on Gowerton Road) and one trip that nips quickly via the A45 to get to Barclaycard. It adds to the challenging and interesting variety at Brackmills.

Wouldn't it be better if the whole caboodle were rolled up into one service with one route number and one easy-to-understand timetable?

P.S. You don't need to catch the 108 lunchtime shuttle from Barclaycard to Town Centre to quench thirst and pangs of hunger. All the richness of the UK's top catering outlets is available just along Caswell Road. 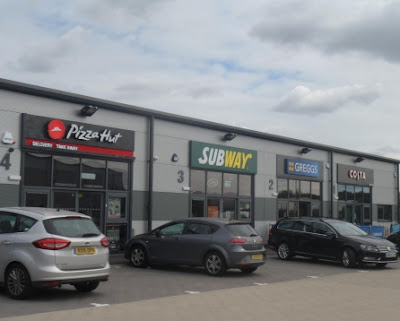 Gourmet meals at their very best worst (?). Hey ho, a bun and a coffee at Greggs is not at all bad. 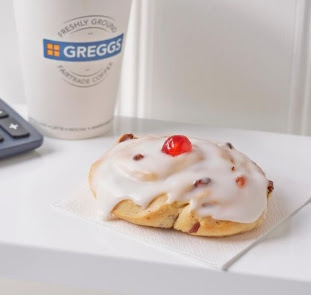