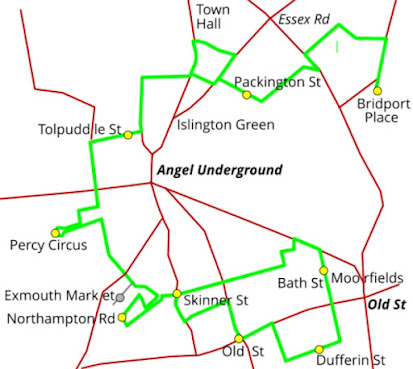 Of course, for real users the map needs more detail, notably a bigger selection of road names. One day, just for fun, fbb might do a really proper job - but frankly it seems a bit of a tine-waster as today is the last day of the 812. 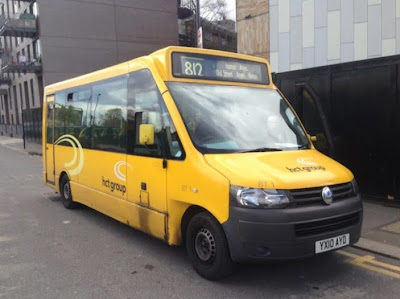 Be it yellow or white
But it never was red;
After its service tonight
The 8-12 is finally dead.
All together, now; "Aaaaah!"
fbb has added a selection of red bus routes (without route numbers - yet!) to the green non-TfL 812 and the map shows clearly that most bits of green are not much more the 500 years from a red bus route. OK, not quite all of them make it to the fleshpots of Islington centre and the delights of Sainsbury's, but most do.
But with a flat fare of £1 and accepting OAP passes, but not Oyster or any other TfL ticket, the 812 was truly a Community bus, aimed at serving the various communities hidden in parts that other buses do not reach.
Clearly it was costing the failing HCT too much and it had to go. Islington Council had pulled out of funding and TfL coughed up a short term donation; but, in the end, it was simply costing too much money for the funds available.
Would a shared taxi service, also subsidised, be any cheaper to run? Probably not.
And we cannot expect anything more from cash-strapped TfL .
So how does Luxembourg manage with completely FREE bus and local train travel? Are very wealthy taxpayers (of which Luxembourg has a few!) subsidising the "lower orders" who have to use Public Transport instead of the chauffeur-driven limo?
There really is no easy answer - but if our society really really really wants to embrace the "green" agenda, then free buses and trams, even free local trains is actually a cheap way to get it going.
A failed national £2 flat fare scheme is not going to do it.
Completing The Ride 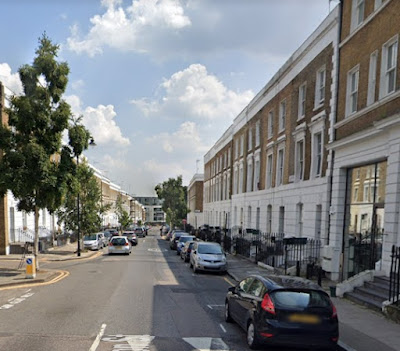 There is a bit of a one-way wiggle before we get into Packington Street and more typically Islingtonian terraces. Off to our left was the post war and controversial Packington Estate ... 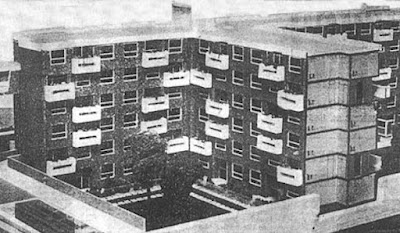 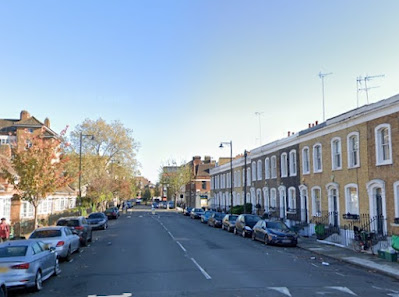 ... with more of the same and a school on the left.
We jiggle across the New North Road with red buses passing by,  We then run round into Downham Road - and that looks like it was once a pub. 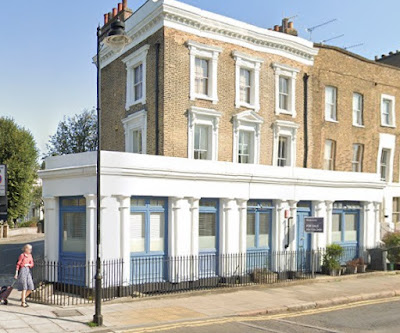 We are now entering De Beauvoir Town and running along the border between Islington and Hackney (orange road on the map below), 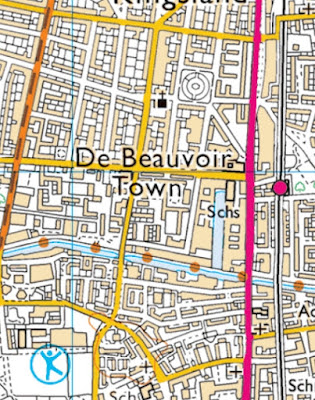 The name is pronounced variously; notably
de Beaver
de Boo-voir (as in French for too see)
de Boh-voir
but apparently not
de Byou-ver (as in Beaulieu Hants)
Some locals will tell you that they live in Beavertown ... 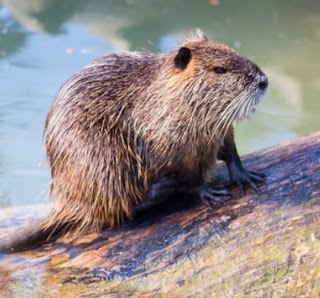 ... but without Beavers!
The area was developed in the mid-19th century, much of it as a carefully planned new town designed to attract prosperous residents, although it does include a range of other housing and land use types.
A bit posher than yer avereage 'Ackney!
The new town was based around De Beauvoir Square ... 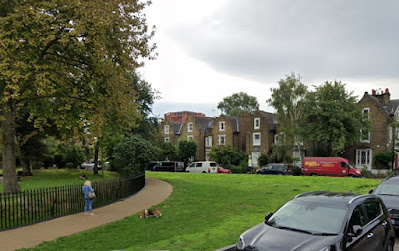 ... and primarily built in the Jacobethan style. The special character of the neighbourhood has been retained and is recognised by the designation of the De Beauvoir and Kingsland Road Conservation Areas which include many listed and other notable buildings.
The 812 only grazes the edge of this pleasant neighbourhood and the bus is soon crossing the Regents Canal ... 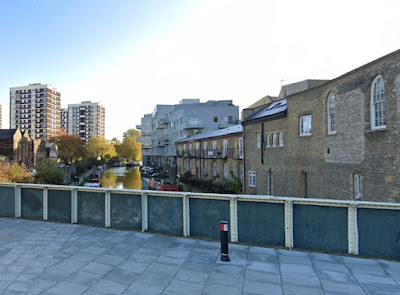 ... and our near deceased 812 is back at its totally unmarked terminus on Bridport Place ... 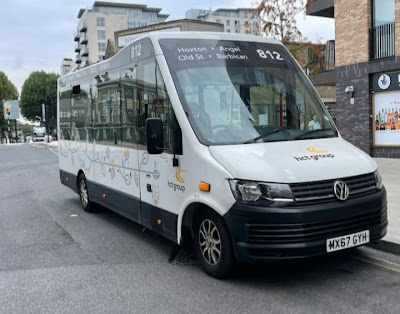 ... having passed through Border Control and Customs Inspection and now in "Ackney.
In his youth, fbb was something of a specialist rider of first day bus routes, usually accompanied by a certain Mr Fearnley and, back then, there were very few last days. The old man (then young) did ride on Rotherham's last trolleybus ("trackless" was the local word) and, more esoterically, the last Sheffield Transport service 122 "works" service to Norfolk Park.
Will there be any enthusiasts to say farewell to the fascinating 812, or wil it die without funeral eulogy and without a weeping congregation?

fbb suspects the latter!
More On Merseyrail
We know that the Northern super-mayors want to run their buses like London (i.e. badly?) but Steve Rotheram of Merseyside also wants to run his trains as well. He want to remove Abellio (soon to remove itself!) from running the trains and do it all by himself.
But more than that, he wants the tracks and stations as well. It looks as if he will get his way. 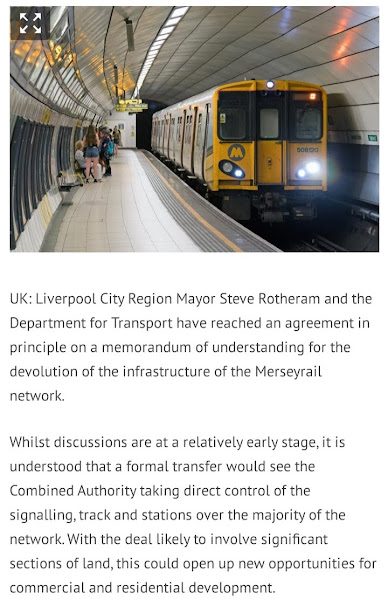 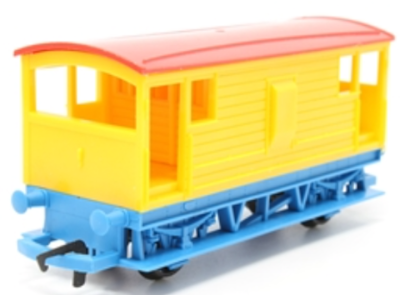 Who made this wagon and for what purpose? Answer tomorrow.
Model Puzzle Picture (2)
Looks like a petrol (or fuel oil) tank wagon, yet it is labelled RMC (Ready Mixed Concrete). So what is it a model of? (Correction : "Of what is it a model?") 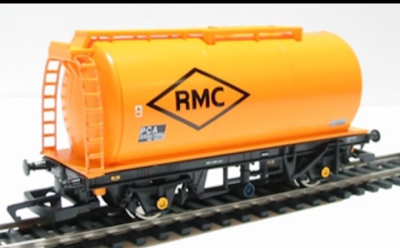 It certainly looks like the standard Triang Hornby petrol tanker in production sice 1973! The example below has had metal ladders added as that particular "run" of the wagon came ladder-less. 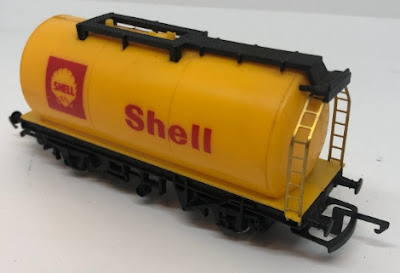