It Was/Is All About The Money 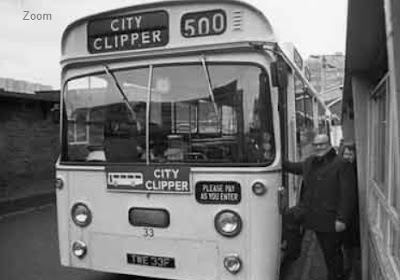 Conceived by Sheffield Transport a brief while before the PTE happened, the city centre service was run by AEC two-door Swifts with a flat fare collected by a dayglo pink adorned cylindrical farebox.
The PTE enthusiastically espoused the service, quickly making it free as part of their cheap fares policy. 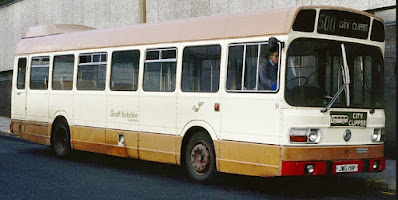 Needless to say, it was hugely successful carrying huge crowds such that it needed a steady stream of articulated buses to cope!

But the cheap fares policy fell foul of national Tory philosophy and a fare-charging Clipper was less successful and the route closed.
Then in 2007 a "son of Clipper" appeared - again free - called FreeBee. It's launch was low key (just a blue ribbon, no goodies and no public to watch) ... 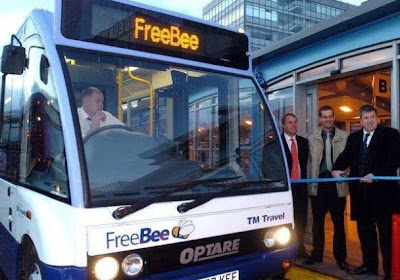 ... but it followed a route similar to The Clipper from bus station, via the central shopping area to Moorfoot and back. 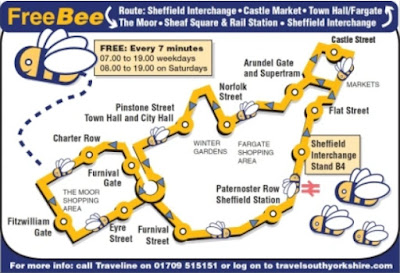 Of course, it was a "political" bus route, a desperate (and probably failed!) attempt to revitalise the city centre in the face of the out-of-town shopping biggie, Meadowhell. 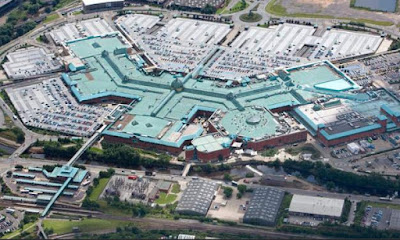 For the likes of fbb, such places are "Hell" but it does have a bus station and train station (lower left in picture above) and is surrounded by free car parks.
FreeBee started in 2007 and lasted for just about seven years - when it was withdrawn.
fbb was scathing in this blog at the time! 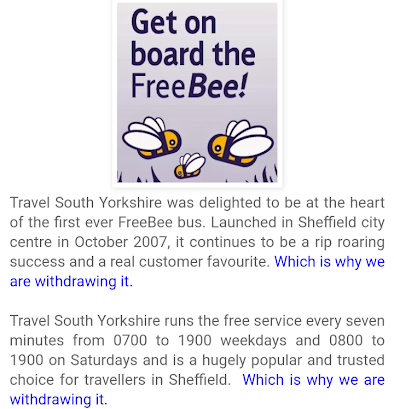 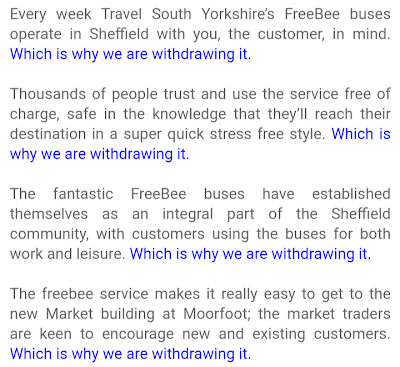 The text in blue is added by fbb!
It was not clear at the time whether the money ran out, whether it was a failure or whether the politicians decided to spend the money on something more appropriate to their political views.
Historically, shopping in Sheffield was linear, running from Wicker in the north to the The Moor in the south and most city bus routes served all or part of the shopping area.
When fbb arrived in the city in 1963, Wicker was already in decline but the Castle Market was the place to shop for what were then called "the workings classes". Posher folk would use Fargate, Pinstone Street and The Moor. 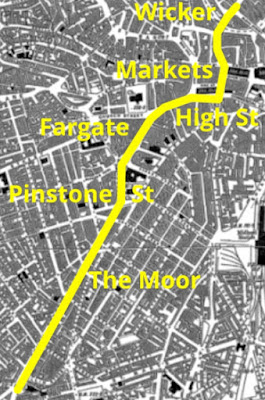 Many of the Moor's shops were rebuilt after drastic WW2 bombing but it took thirty years to tidy up the dilapidated southern end. And that was achieved not with shops but with an office block!
First Fargate was closed to all traffic. This was OK because the buses would stop at both ends.
Then The Moor was closed to all traffic (1970 ish) and buses were banished to parallel roads "round the back". Although a pedestrianised Moor was not a great success, the City Clipper helped in carrying passengers to both ends and round the back on the parallel roads, Charter Row and Eyre Street.
Then came the recent closure of Pinstone Street. This was announced as "temporary" to aid social distancing.
Tosh! 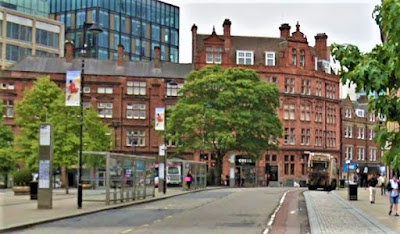 The pavements were the widest in the city and there was plenty of space to shop, saunter, be sociable and (if desired) be separated.
The effect of this closure was to remove buses from some of their most important stops and send them even further "round the bask" (Streetview before the new stops were installed) ... 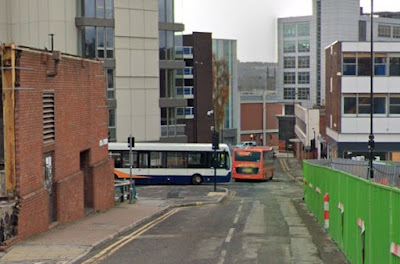 ... with no room at all for social distancing! Of course, the stops were now even further from the shops.
But the Councillors who wanted to make this closure permanent suggested that they would run a minibus to serve the embargoed areas. This was dated March 2022. 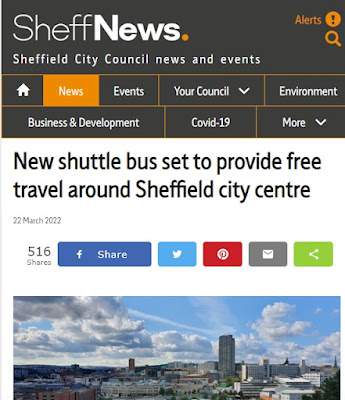 And yesterday it started amid not even a faint glimmer of publicity.
If you happened to search the right bit of the internet, you might have picked up an advance notice (advance by a few days) but you would have been lucky. 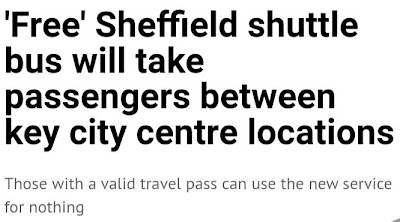 Saying it is "Free" to existing pass holders is not much of a statement. Of course it will be free if you hold an Old Fogey's pass.
Councillor Terry Fox ... 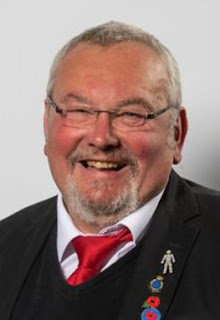 ... seems to think it will be free if you already have a bus ticket in your eager hand. So, presumably, just pick one up off the pavement and save yourself £1. 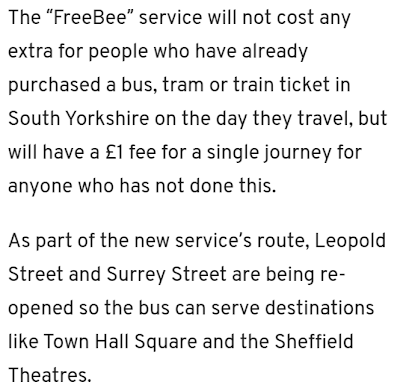 Back in the days of the Clipper and/or Freebeer, folk would hop on or off as they wished and as they shopped; but this new service will cost non pass holders and, possibly, existing ticket holders £1 per journey.
It is not quite the same, is it? You could end up paying an extra £4 per city centre shopping trip if you "hopped", say, four times between shops!
On the other hand, it is not at all clear who will actually pay! fbb awaits a report.
And if too many travel the "minibus" will be full anyway. 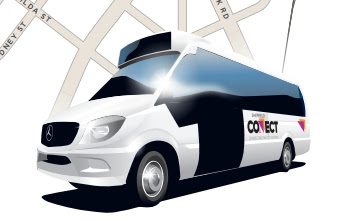 Nevertheless, it starts today!
fbb has his Sheffield correspondents on hand to report back!
We will have a look at this astounding bus service development tomorrow.
Lovely Livery
Below is, possibly, oner of fbb's favourite liveries. It was for the post-privatised London and Country bus network (formerly London Country South West). The colours were vibrant but with a strong hint of the historic (but boring) all-over green. 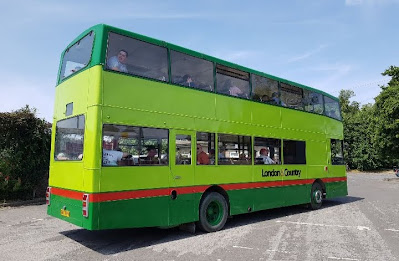 It is shown off well on this beautifully preserved double decker. 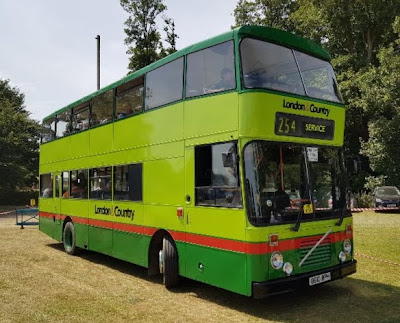 This was the work of the Bearded Bus Beautifier from the Bush (a k a Ray Stenning) before he went all swirly and all jiggly.
So good to see the livery enhancing the body shape rather than obscuring it!
Pity it had to be spoiled by adverts! 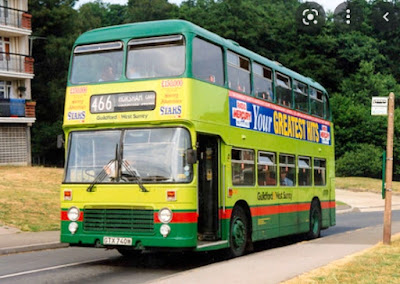 From Good To Awful
How to block the view of most top deck passengers! (click to enlarge the horror!)

Well done Stagecoach!
STOP PRESS
Rumours are flying around that Yellow Buses has been in discussions with National Express. NEx sold Dundee Buses to McGills possibly as a prelude to merging with Stagecoach - a merger which didn't happen. 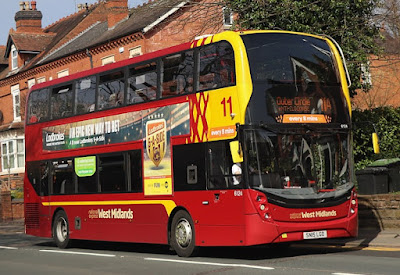 No further information is to hand.
Next Every 10 Minutes blog : Tuesday 2nd August
Posted by fatbusbloke at 02:00