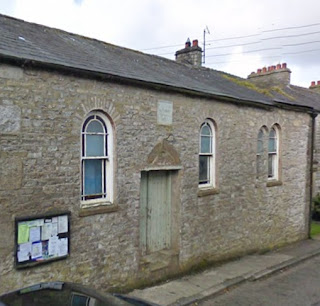 Newbiggin on Lune had two churches. Back in the day, there was a primitive Primitive Methodist chapel on Main Street which moved to bigger and better premises just across the road in the 1930s. 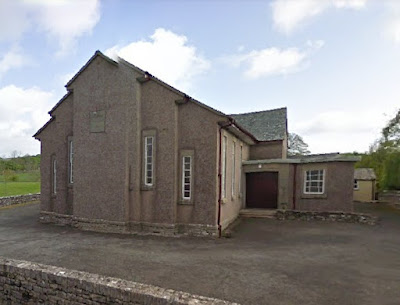 This is still trading with a lively looking programme. Then there was St Aidens, technically a "chapel of ease" (i.e. small branch office) of the main Anglican Church in Ravenstonedale. It is now a private dwelling. 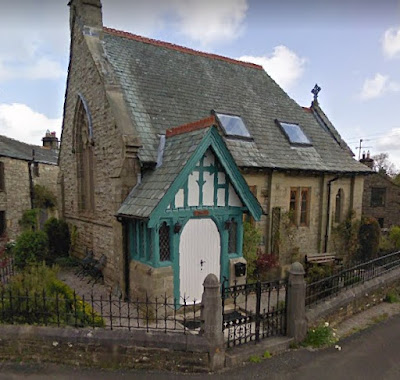 Ecclesiastically sweet!
Next door, literally, was the Post Office, typically in one room of a cottage (note hanging sign on the corner). 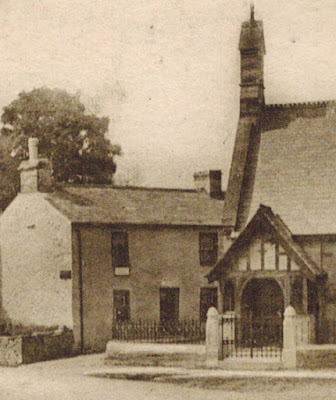 Nowadays the only postal facility is a red posting box opposite. 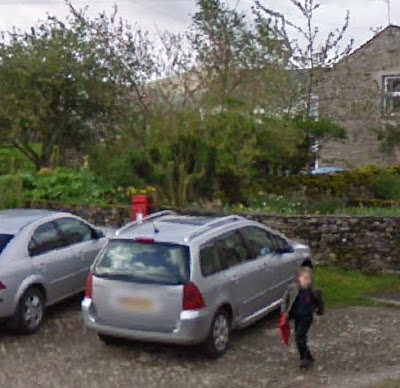 There is a substantial village hall ... 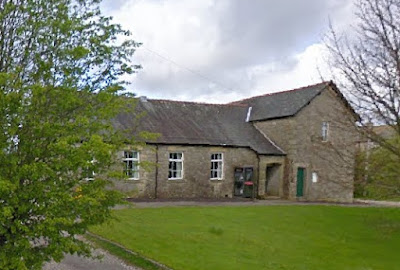 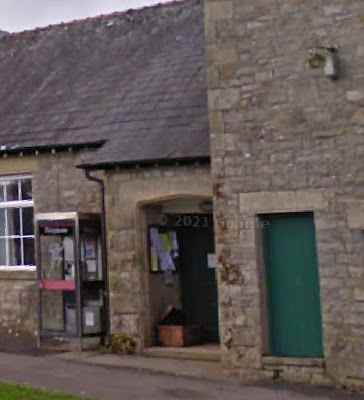 ... which may, or may not, still be in operation!
fbb guesses that the pre-school playgroup was the one-and-only village general store; BUT ... 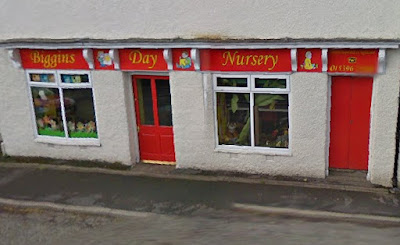 ... where was the Pub?
fbb can find no record of a pub or a school in Newbiggin, research complicated by other nearby Newbiggins! It seem likely that the kiddies would walk to Ravenstonedale to get their learnin'. It is, after all, only just about one mile down the lane. 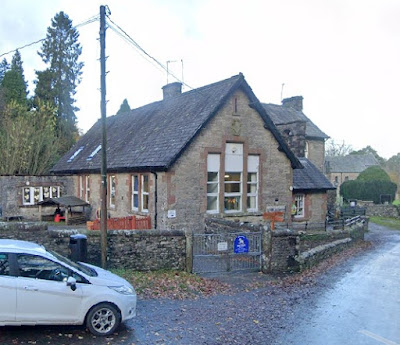 In a not too distant news report the school had zero pupils, but, when Streetview bumbled past, there was a handful enjoying their break in the playground.
This residence does look as if it might have once been a pub with space on the first floor wall for a large pub sign. 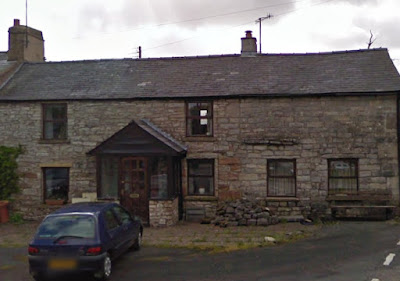 Maybe someone will confirm or refute an unsupported fbb guess!
But the village of Newbiggin on Lune exemplifies many hundreds of rural communities which have lost their "community". You would be brave indeed to wish to settle there without access to a car.
More or less everything you might need would have to be obtained in Kirkby Stephen, further away or, as ever, on-line!.
But one facility in the Newbiggin neighbourhood stands out, literally. 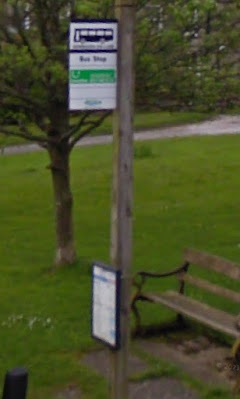 It has a bus stop! It has a flag and a timetable frame. Ergo, it has buses.
But, how many and when?
And what would the likely take-up of passenger numbers be. Surely these small villages, spread out along the A685, could never sustain a commercial service?
Cumbria Council has an up-to-date route map (well, it claims to be) which is a good start.

More tomorrow.
P Q R S T (Part 2)
The only bit of fbb's model railway that is fixed down is the distinctive rock face at Peterville Quarry station. As it is constructed from squidgy plaster that has set, and the "rock" is thus entwined in the plastic grass, it won't come apart easily.
So could fbb give the grass matting a hefty yank and bring the rock face with it ... 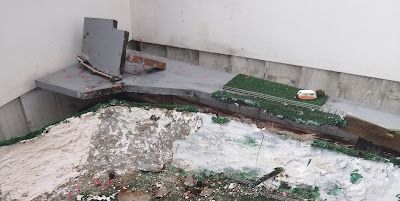 ... without breaking the rockface. The answer was ...

... NO!
But it should be repairable; fbb has a full-ish packet of Tetrion.
Progress?
Two Half Day's Work For A Bus
The collapse of Powell's led to some snappy decisions on the part of the South Yorkshire PTE which brought Stagecoach on to three of the Powell's routes (6, 61/62 and 201), those which seemed to need prompt treatment. Stagecoach started operating on 8th August, very soon after the demise of Powell's.
Well done PTE
Less snappy was the solution for the 5 and the A1.
Cawthorne's of Rotherham seemed excited to get the job. 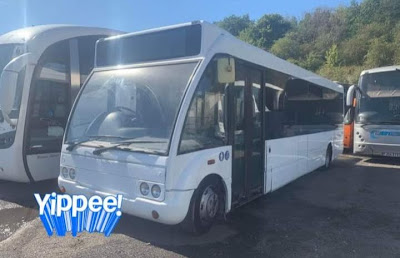 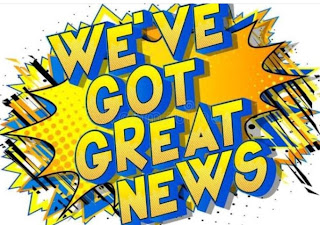 Service 5 (map - GREY), historically, mops up several bits and pieces hung over from the heady days of South Yorkshire's political policy of serving everywhere no matter what the cost. 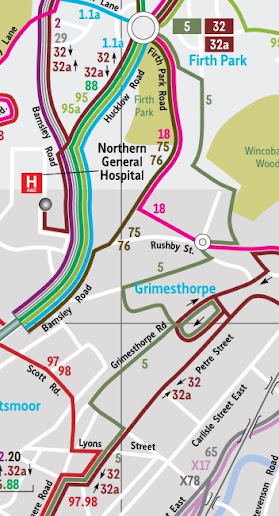 Until the collapse, this route ran hourly (Monday to Friday only) offering shopping journeys and the possibility of "commuting" to a job, either in Sheffield or in the shops at Firth Park. 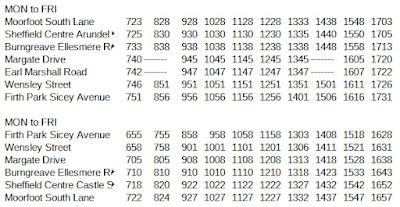 Its replacement is still hourly, but offers trips off-peak aimed at shoppers only.

So it will carry far fewer passengers and very quickly be a candidate for total withdrawal. 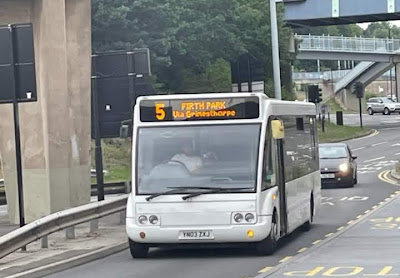 The A1 is the vestige of a set of services designed to breathe life and workers into a whole range of developing industrial areas. They didn't, so all fizzled except the A1 (GOLD). 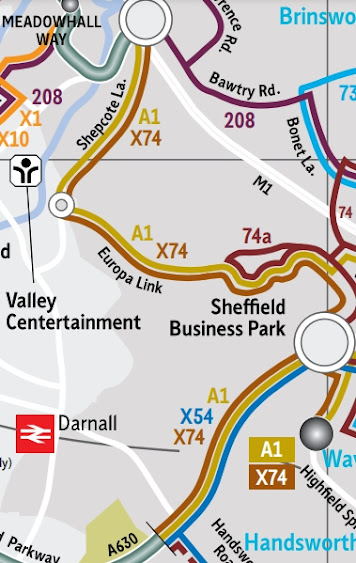 But it did take workers to and from Sheffield, and ran hourly (with peak extras) throughout the day, again Mondays to Fridays only. (timetable extract shown below)

This is replaced by a few peak hour trips from Waverley (the blob centre right on the map above) to Meadowhell shopping centre and back.

The frequency is every 40 minutes which is memorably unmemorable - hourly would be far more sensible - and there are now no journeys into Sheffield.
So it is pretty much useless; and passenger numbers will surely decline - if any ever use it in the first place!
But the clever thing is that the two near-useless services can be run by one bus. Morning peak it shuffles via Waverley and Meadowhell, then off for its runs between Firth Park and City; then back to the busy (?) industrial areas way out east for the evening peak.
It is a scheduling skill (?) but far from encouraging to existing and potential passengers!
fbb will be watching the next 5 and A1 emanations from the planning section of the PTE with a mixture of unbelief and wide-eyed wonder.
Next Newbiggin blog : Thursday 18th Auguat
Posted by fatbusbloke at 02:00