How Things Have Changed

Those who correspond with their local paper can sometimes suffer from a touch of the Homer Simpsons; but retaining the apis mellifera within the headgear rather than assassinating the creature! Incidentally, the shopkeeper Apu is to be expunged from the series due to racial stereotyping, as fbb was explaining to his pals Taffy, Jock and Paddy the other day. 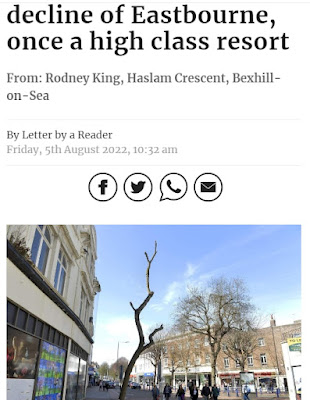 Rodney has two particular concerns, summarised thus: poor facilities for bus passengers, closed shops and one demolished hotel.
Eastbourne itself now leaves much to be desired with what can only be described as a “deep crater bomb site” remaining from the Claremont Hotel fire in 2020 ... 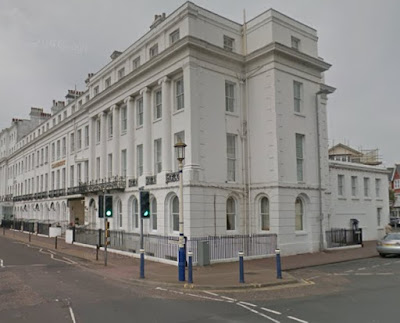 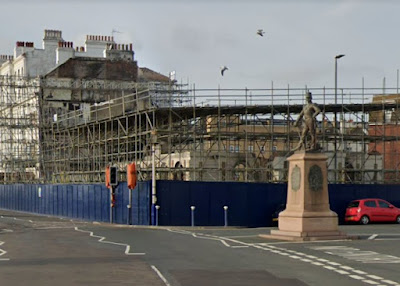 ... and two very large empty retail buildings left by closure of Debenhams and TJ Hughes.
Plans for the redevelopment of TJHughes ... 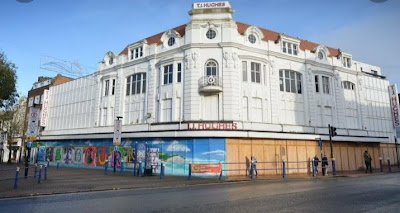 ... to something retaining the character of the former House of Fraser store with retail on the ground floor and flats within the existing building for the rest.

There is an extra floor behind the new "mansard" roof.
Rodney should be happier!
The future for Debenhams is less clear at the moment, as is the future for any town centre retail business!

Rodney doesn't like the food market either.
A row of market-style huts along the promenade doesn’t help the image of what was always such a high class resort. 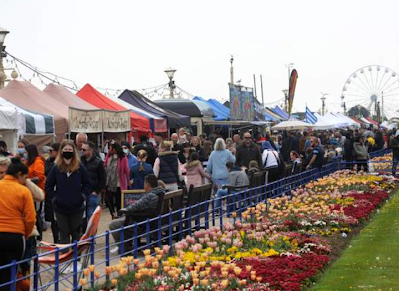 Maybe he would prefer a branch of Harrods?
But it was his comments about the bus service that really aroused fbb's interest.
I have been a regular weekly visitor to Eastbourne for the past twenty years except, of course, during lockdown. It is shameful how the town has deteriorated during that time, particularly regarding its discrimination against older people travelling by bus from Bexhill and Hastings.
So what has happened.
Terminus Road, the main shopping street, runs from the railway station, a terminus (there is a clue in the name!), all the way to the sea front. 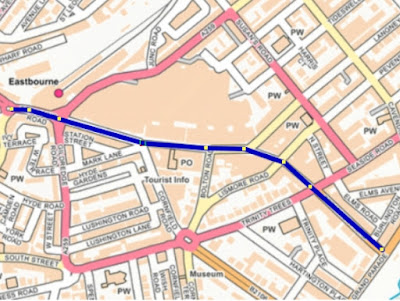 In recent years various bits have been pedestrianised (BROWN) and, most recently, one chunk (GREEN) that used to have lots of bus stops, has been narrowed, made one way and buses only with all the stops removed. 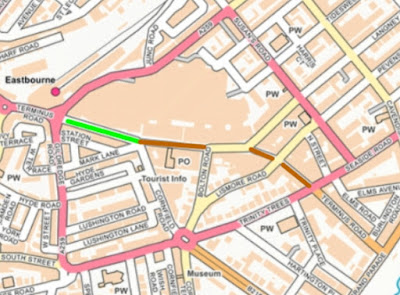 Cars are diverted "round the edge" on what is laughably called the inner ring road (RED). 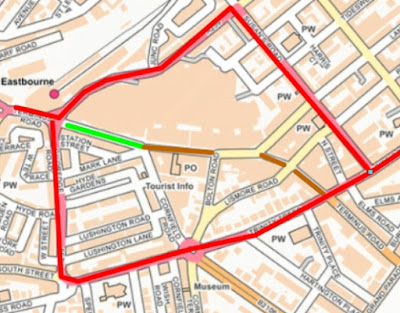 Which leaves the buses! 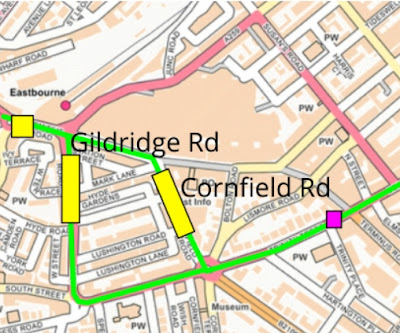 All services that pass through or terminate at Eastbourne Centre use a one way clockwise loop via Cornfield Road and Gildridge Road. There are stops at the station but no longer do any buses stop on the "green" bit of Terminus Road.
So now we can return to Rodney's Letter, He is concerned about the two bus routes from Hastings and Bexhill. His first angst concerns the direct service from there to Eastbourne which, he claims no longer stops at Terminus Road at its junction with the road called "Twelve Trees". 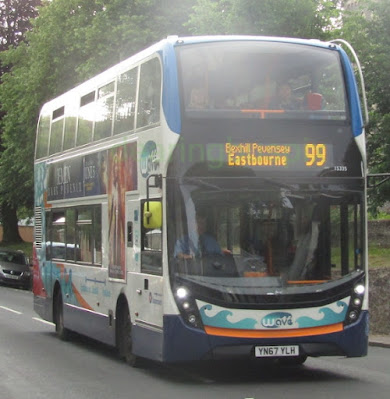 Inbound passengers on the more frequent Stagecoach 99 service are no longer able to alight at the eastern end of Trinity Trees due to a highway closure at the bottom of Terminus Road in favour of artificial grass, tables and chairs outside a number of what must be struggling restaurants. (alighting stop, picture below, right)

Well, Google maps says they are ... 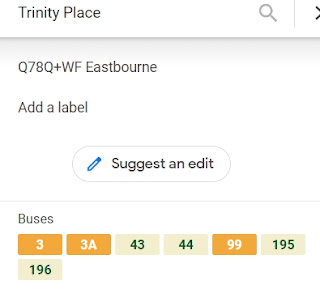 ... the stop being called Trinity Place, marked on the above map with a MAGENTA blob. The Google map also says you cannot board there for a return trip east ..., 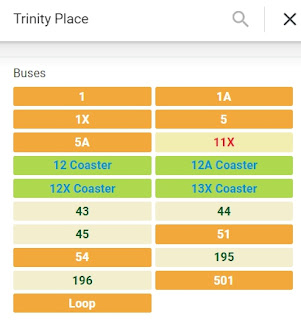 ... which is correct because the inward 99 uses a one way road which the outward 99 cannot use.
Another map? 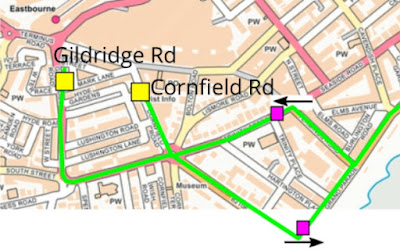 Departure is from Cornfield Road; arrival is on Gildridge Road.
Is there a route 99 map from Stagecoach? There are several showing the 99, all or in part. There is the Eastbourne town services map ... 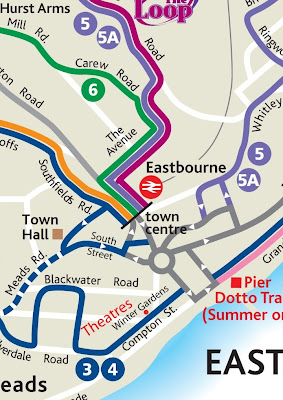 ... with the terminating service 99 in PINK and lots of little arrows. Then there is the East Sussex map/ 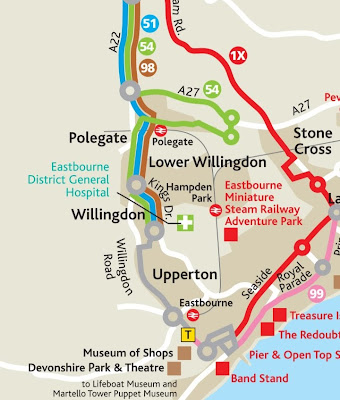 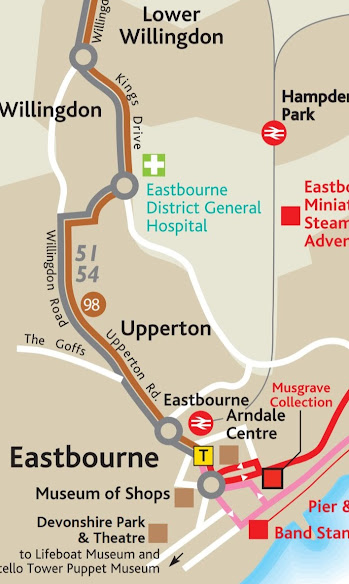 ... and the arrows are back, but less of them.
Oddly the 98/99 map also shows the 1X???
If you already know where the 99 goes, then these maps will, just about, show you where the 99 goes. But what you really need is a detailed bus stop map showing which services stop where.
And there isn't one! So tough!
Rodney wonders about getting off and on at the Pier, the first place where the 99 stops are opposite one another ... 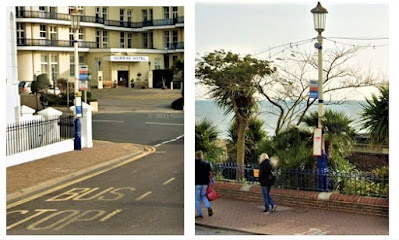 Using the nearest alternative stop at the pier, not only involves an additional quarter of a mile walk but also great difficulty in traversing the busy Grand Parade without any convenient light controlled crossings.
It is quite a trek from the town. 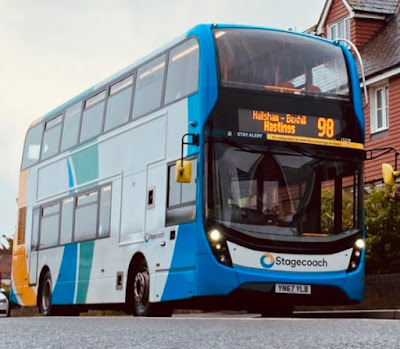 Then Rodney complains that the 98 and 99, which both go to Bexhill and Hastings, leave from different stops, the 99 (as above) from Cornfield Road and the 98, which approaches from the north, from Gildridge Road only setting down where the 99 picks up.
Coming home isn’t much fun, either, with 99 buses leaving from Cornfield Road and 98 services from Gildridge Road, nearly 200 yards apart and involving crossing two roads.
But hang on a sec. 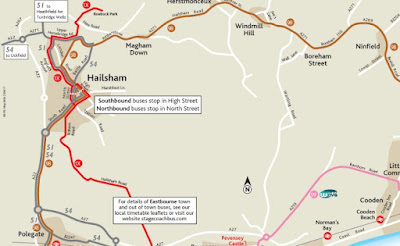 The 98 is slow and goes the long way round, via Hailsham, running only once an hour ... 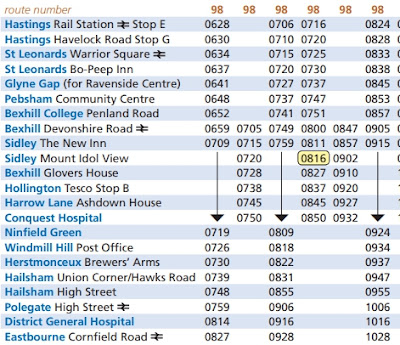 ... taking a whopping TWO HOURS.
The 99 is every 20 minutes and takes one hour and twenty minutes. 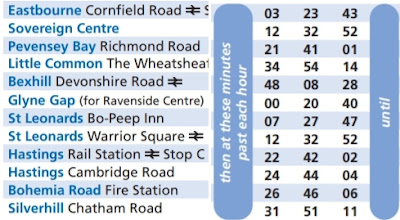 Rodney's anguish that these leave from different places is technically true but in practice hardly a problem. If you want a long ride home just for the fun of it, you should be capable of finding your stop.
Of course, referring to the non-existent bus stop map would help enormously.
fbb will draw one for a modest fee.
But Rodney is right in his general complaint. The removal of buses from Terminus Road (both sides thereof) has made public transport harder in Eastbourne and, without a doubt, will cause a reduction in the numbers travelling and then a further reduction in service frequencies.
Next Variety blog : Saturday 13th August
Posted by fatbusbloke at 02:00