Freight Transport Plus Other Stuff 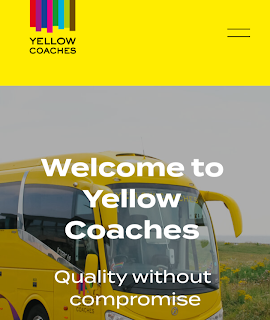 National Express was the supposed suitor for the ailing (and now defunct) Yellow Buses, the one-time Bournemouth Corporation Transport. The company had developed a sizeable coach business including some contracts with National express. 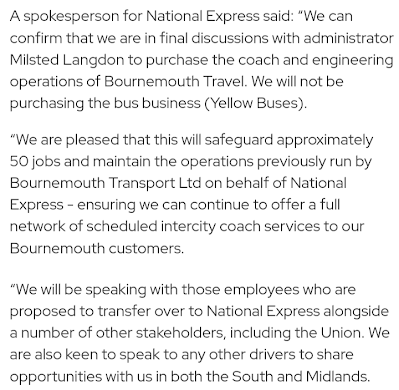 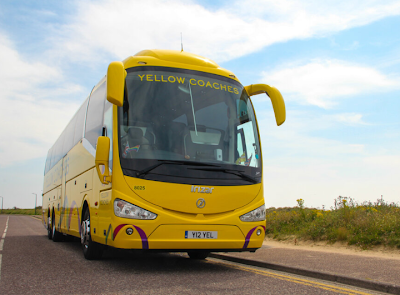 So that will be a smidgen of good news for some of the staff. 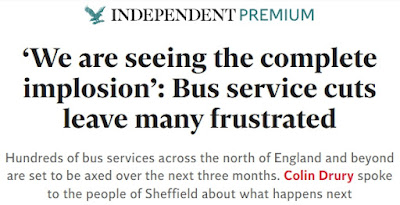 This is from the Independent (on-line and only on subscription), so fbb could only read the article if he paid. 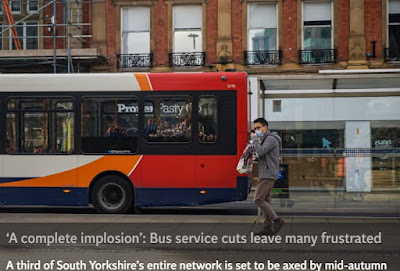 He was only able to read a fading first paragraph ...

... which was an undated sob story about someone who was waiting for a possibly missing service 18. The anecdote was absolutely nothing to do with future bus cuts!
There is, of course, no service 18 from Sheffield Centre at 2045 (readers of The Independent are, obviously, incapable of understanding the 24 hour clock, nearly 60 years after it was introduced to the appalled bus using public) ... 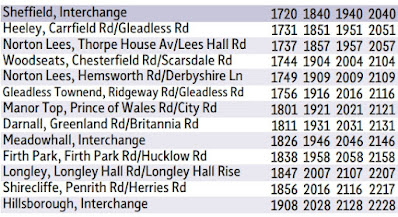 ... as it leaves at 2040. Perhaps the hapless Cathie McCartan had missed it. Even if it was missing because of staff shortages, it certainly was not an "autumn bus cut".
fbb reminds his avid readers that Nige, boss of First in Sheffield, has already headlined the need for a 25% overall cut in services to make his business viable (actually less non-viable. First has been struggling in Sheffield for years).
Moral : don't believe what you read in the media unless there is reliable corroboration from the bus operator(s) concerned.
The thrust of the article, that bus cuts that haven't happened are "leaving many frustrated", is simply poor journalism.
Cementing A Relationship 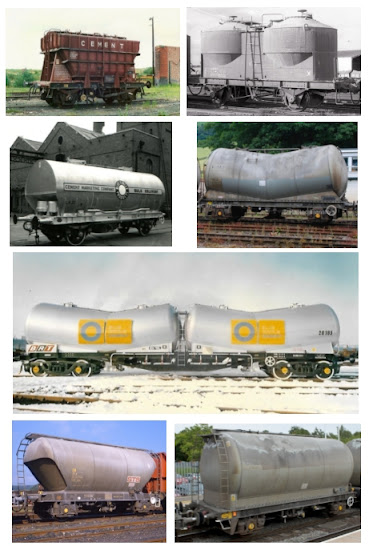 On extending his substantial collection of fuel tank wagons, fbb has been grappling with the design and nomenclature of "tank" wagons used for powder (cement) propelled by compressed air to make it behave like a liquid.
The different designs are shown in the above montage in roughly their historic order. They are, row-by row:-
Presflo : Prestwin
Cemflo : Vee (a k a Depresed Centre
Double Vee
Cemflo Mark 2 : Metalair

In age, this series takes us from the late 1950s to the 1990s. There is one further development which will be revealed later.

That omission was because "Cemflo Mark 2" was about to hit the OO gauge model railway world, meaning that fbb would have three models in his Cemflo collection to drool over.

The first Cemflo model came from Hornby (a k a Triang Hornby) nearly 50 years ago. In its day it was a thoroughly respectable model although fbb can find no evidence that the real thing was ever operated in yellow livery. 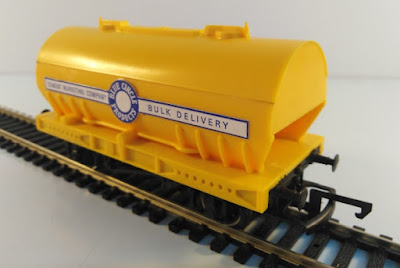 The bodywork is commendably accurate (for its day!) but the lettering is printed on paper and stuck on. In use it would fall off. Even if some did appear in yellow, they would remain clean for only a few weeks as cement is mucky clinging stuff that gets everywhere!

So one on-line correspondent has "weathered" his ... 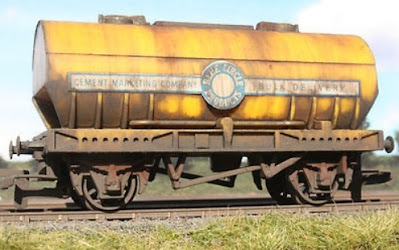 ... and it certainly looks better - even if such a wagon never existed.

Modern "manufacturer" Accurascale (the wagons are, as usual, actually made in China!) has produced a much better model ... 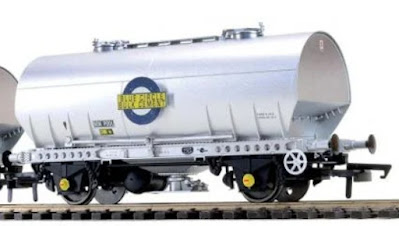 ... which is beautifully close to the real thing ... 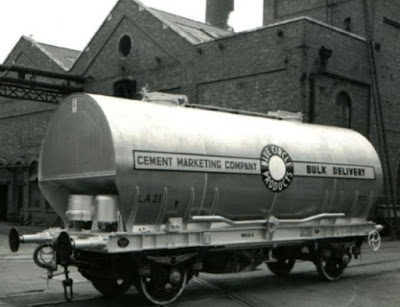 ... seen above, shiny, silvery (not yellow) and new, as delivered from the builders.

The weakness of those 1970s Hornby models was in the chassis, which was basic indeed. Now, when the wagon is on the track and trundling round the layout, you cannot see much of the chassis.

But the Accurascale chassis is a real delight ... 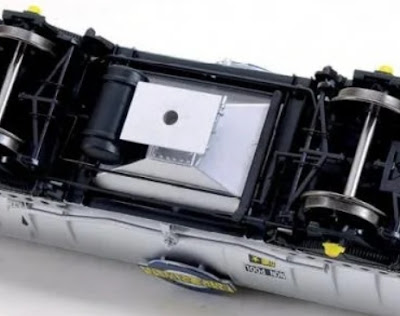 ... although some purists would claim that it was still "somewhat simplified".

Frankly, fbb has never crawled under a Cemflo cement wagon, nor is ever likely to; so cannot speak with authority; but his railway mind was really blown when his latest purchase arrived c/o Royal Mail an few days ago.

It was what fbb calls a Cemflo Mark 2 (bottom left in the above montage).

The actual wagon body is a little plain ... 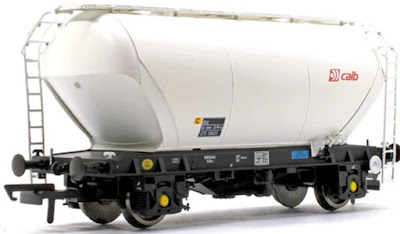 ... being all-over white with a small "caib" logo and the usual "legal lettering".
But, look underneath and ... 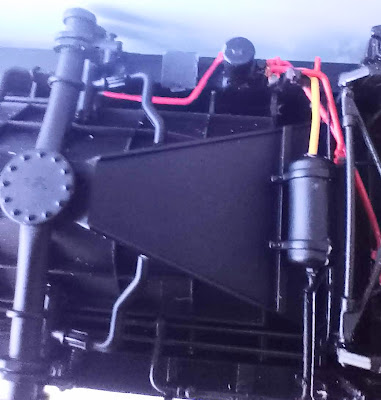 ... wowsers!
That is what you call detail! Once again, the majority of the pipes and similar stuff will never be seen when running on the track. But, you pays your money ...

Consequently the wagon is not cheap. fbb will publish a few more pictures in a later blog - but al least that's yesterday's puzzle picture solved!

Sights Seen At Sywell On Sunday 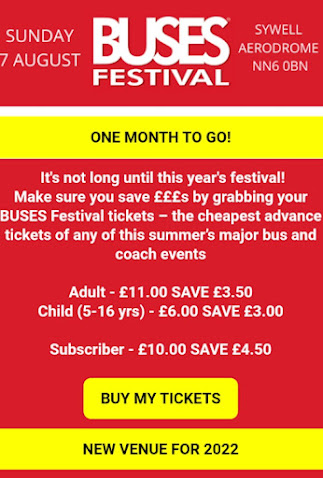 Alan went, as you might expect, because Sywell is very close to Northampton. He sent a couple of pictures for fbb's edification.
One is the Bearded Bus Beautifier from the Bush, who gave a stimulating talk ... 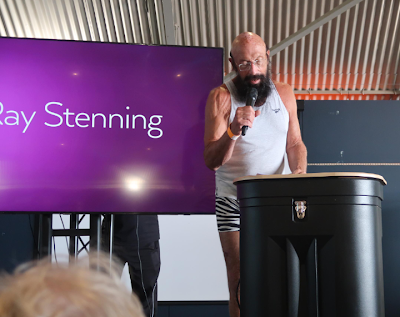 ... performing (?) in his usual modest attire; although not everybody could see the screen properly. 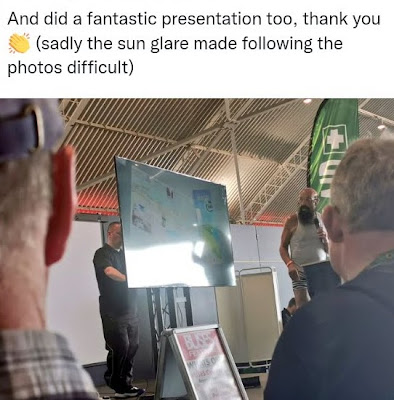 Pity!
Then Alan sent a picture of a bus, a Southern Vectis single deck bus no less. 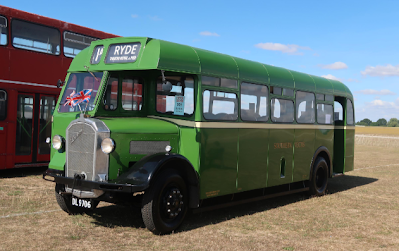 It is a relatively recent recipient of righteous restoration.

It was rebodied in 1944 by Eastern Coach Works in nearby Irthlingborough (near by Northampton, that is) using wartime grants.
It is a Dennis Lancet ... 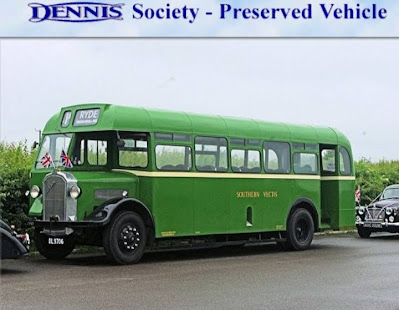 ... but, of course, you knew that, didn't you? Below, it is photographed at the Ryde Esplanade terminus. 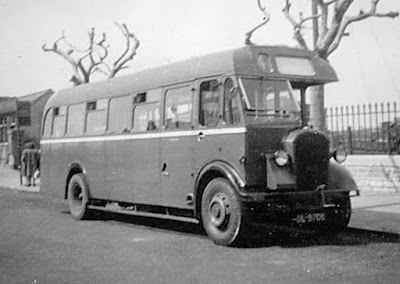 There was a more recent Dennis Lancet ... 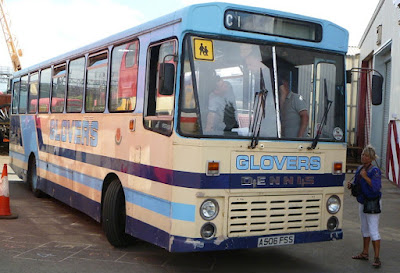 The Lancet was launched in 1981. It was mainly used as the basis of a bus or coach, although some were bodied for other uses, mainly as mobile libraries.
At a time before the advent of low floor buses, when wheelchair access required the fitment of a chairlift, a few bus operators and councils bought Dennis Lancets with this feature. Leicester Citybus and West Midlands Passenger Transport Executive had three and two respectively with Duple Dominant Bus bodywork.
Other UK customers for the Lancet included Tillingbourne Bus Company, Merseyside PTE (with ten, the largest British fleet), Northern Scottish, Blackpool Transport, Portsmouth, Merthyr Tydfil and Taff-Ely.
Around 87 chassis were built. Nearly a third of them were exported, to Bermuda and South Africa.
So you are forgiven for being confused, as was fbb!
Next Eastbourne Exclusion blog : Wednesday 10th Auguat
Posted by fatbusbloke at 02:00