Publicity for the new Sheffield city centre service was flooding on to the streets of Sheffield over the weekend NOT. Excited readers could also enjoy an advert on the home page of the Travel South Yorkshire web site (see above) if they spotted it scrolling past.
Sheffield correspondent Roy snapped the information at Stand B1, Sheffield Interchange on Sunday.
There was a non timetable ... 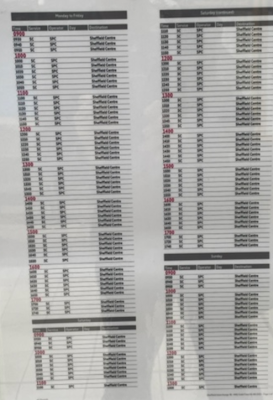 ... relatively illegible. Maybe Sheffield folk could just cope with the complex maths of the phrase "and every 10 minutes" but in bigger print. fbb does accept that a "proper" timetable is probably a waste of time as the chances of the buses keeping to their advertised schedule are minimal. (more to follow)
There is a "Customer Notice" ... 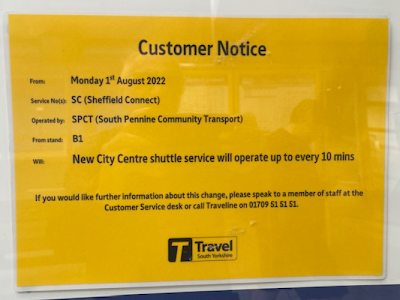 ... although most customers might spot that it is a "notice" without being told. Better would be a large ... 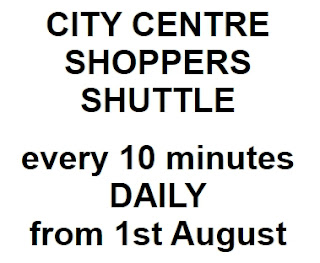 ... big enough to catch the "customer's" eye!
And there is a map, which fbb will explore later.
Out on the streets, again on Sunday, bus stops have started to appear, like this one outside the Crucible Theatre on Norfolk Street. 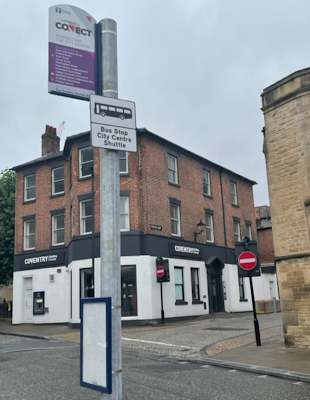 As well as the "flag" there is a sign telling you that it really is a bus stop. In case you hadn't noticed. 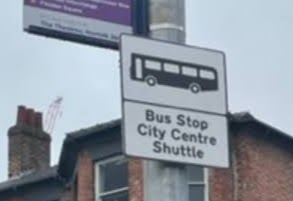 The flag itself, obviously designed at great expense by an internationally renowned firm of public transport consultants, is in a fetching but weak purple colour with white lettering, far too small to read easily ... 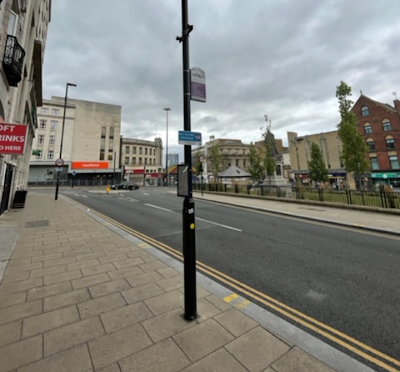 ... especially when the flag is pitched high on the pole. The stops list should be at eye level e.g. as part of the timetable frame, not high up a pole.
In the absence of detailed information, at least the flag will give the optically gifted some idea where the bus might go! 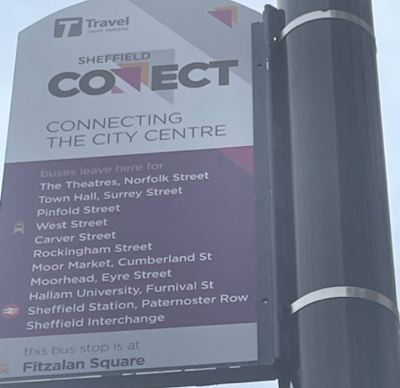 Readers will have noted that there was no advance timetable information in the frames on Sunday, last. No rush to tell people, SYT, in case they try to use it!!
Keen observers of the realm of modern traffic management and the associated abundance of street furniture may have spotted these as they ambled round the city centre. 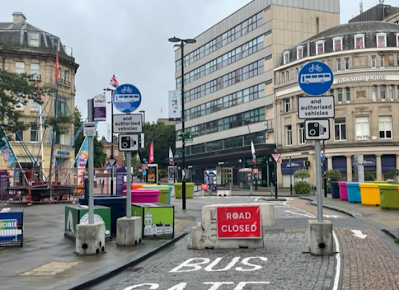 The "buses only" signs and the bus stop with flag and notice telling you it is a bus stop are planted in large blocks of concrete, so are "transportable" if you've got a small crane. Does this imply that the route is "experimental"?
They are at the end of Surrey Street, next to the Town Hall (out of shot, left) on a bit of road that was blocked off as part of the Pinstone Street closure. 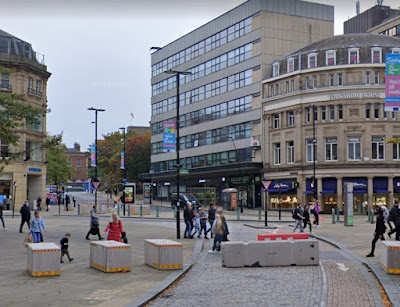 This view is looking west. Here is a street map extract but this time facing north as is the convention. Straight ahead is Barkers Pool ... 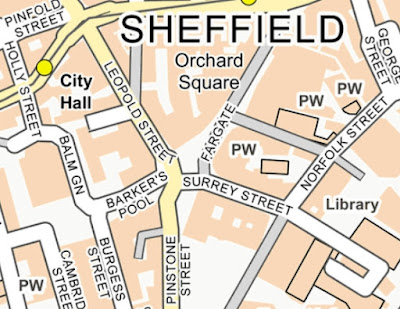 ... and hitherto the roads to the left (Pinstone Street) and right (Leopold Street) have been closed to all traffic in the potty scheme to discourage passengers from travelling by bus into central Sheffield.
Here are a couple of pictures from Roy, taken on the first day ... 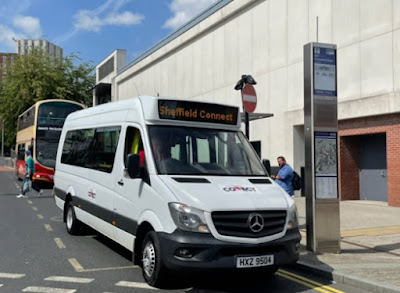 ... the above at Moorfoot, Cumberland Street. outside the fascia of the relatively new Moor Market. 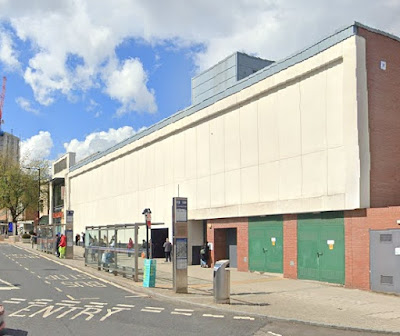 And the lads have managed to get the logo on to the monolith stop sign. 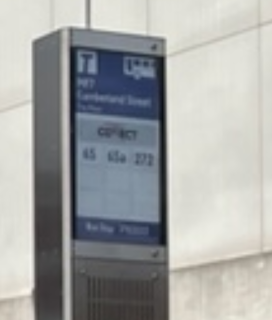 Spot the strong visible brand on the bus! 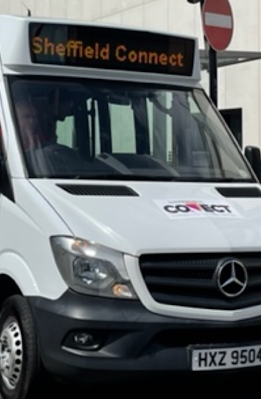 But it is all on line.
Well, it is if you know where to look. The service doesn't have a route number so it is listed under "SC", so easy to track down, NOT.

Although the timetable is identical Monday to Saturday, TSY insists on showing every journey in full on both days. Saturday ditto!
And, ludicrously, it runs on Sundays. None of the earlier city shuttle buses have EVER run on Sundays.
Whoever's paying the bill must have money to waste!
More tomorrow.
Yellow Buses - Again 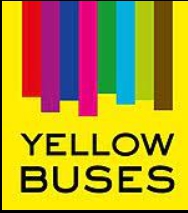 The "statement" from the receivers is given below (at least the bits that matter!) in a more legible form than on an earlier blog.
Yellow Buses has suffered from the challenges of the COVID period and the changes in lifestyle habits which have followed, with more people working remotely and some people still being reluctant to travel on public transport.  All of this has severely reduced passenger numbers on all routes.
This loss of revenue has had a financial impact on the business and additional factors such as the recent increase in fuel prices and the general rise in inflation has only made that greater.
The directors have, for some time, been looking for outside investment or a purchaser to take Yellow Buses onto the next stage of its life.  They felt that as a small independent business it was unable to handle the current challenges alone and hoped that by merging with a larger operator it would provide them with a broader platform from which to operate.
Unfortunately, those negotiations take time, and during that time the business was coming under increasing financial pressure. Negotiations with one of those parties, a large national operator, have entered the final stages and we hope to be able to conclude within a matter of days.
Next 10 Minute Frequency blog : Wednesday 3rd Aug
Posted by fatbusbloke at 02:00