It was Roger French's "Bus and Train User Blog" that alerted fbb to this oddity. It is a bus route in London, very much in London, but is not a London Bus Route.
It does not appear on Ian Armstrong's delicious London Bus Routes pages ... 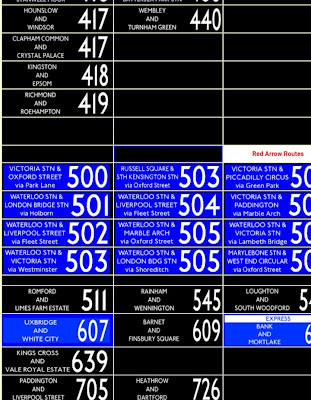 ... which end with the 726. Even on the equally glorious Robert Muster's timetables pages ... 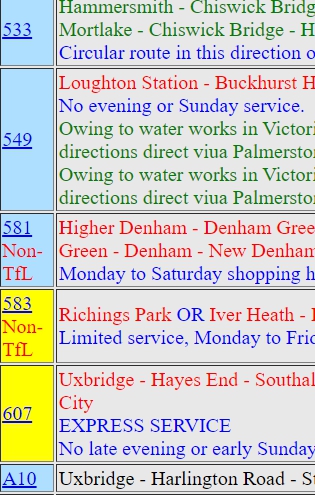 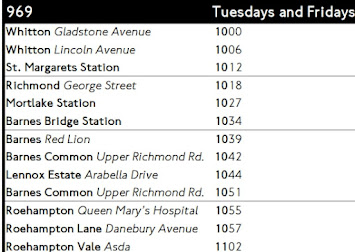 ... and he does, as you can see above, include most non-TfL routes in his listings, routes that are not TfL but work in London.
These routes, and the 812, operate under what is called a London Bus Permit.
Blogger Roger helpfully includes a Mike Harris map of the route, shown in GREEN because it is not a RED bus. 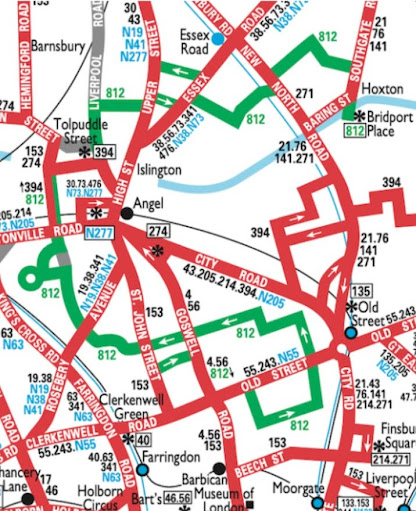 Sadly, with no road names on the green bits, working our where it might go is a bit of a struggle.
In fact, when it started, it was a YELLOW bus! Or so Roger says. 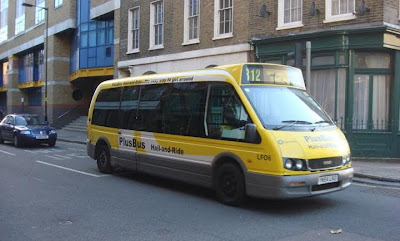 But you won't find it on Traveline! 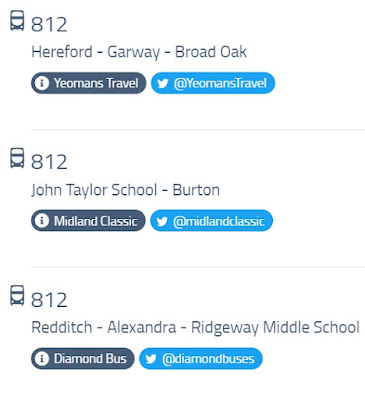 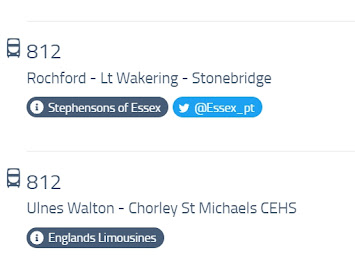 Perhaps Roger French, stressed beyond measure with an over abundance of station announcements, (see Bus and Train Use) ... 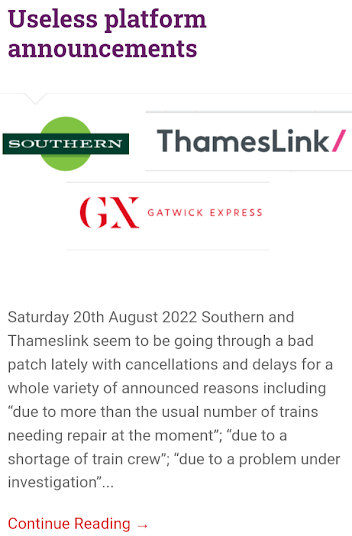 ... is delusional, in need of therapy or even medication.
But no - the 812 exists and is advertised on the operator's web site ... 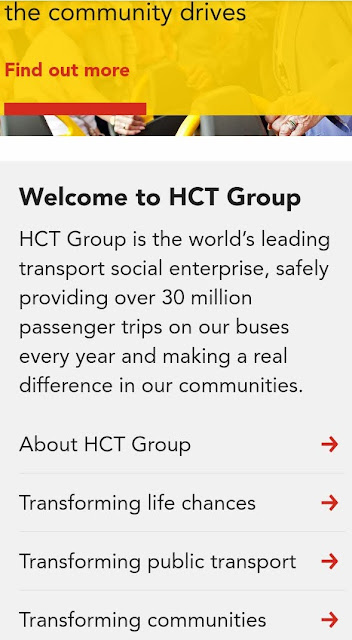 ... but you will struggle to find it amongst the hype! 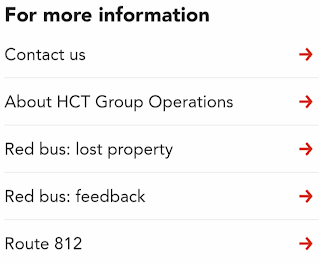 But there is a timetable ... 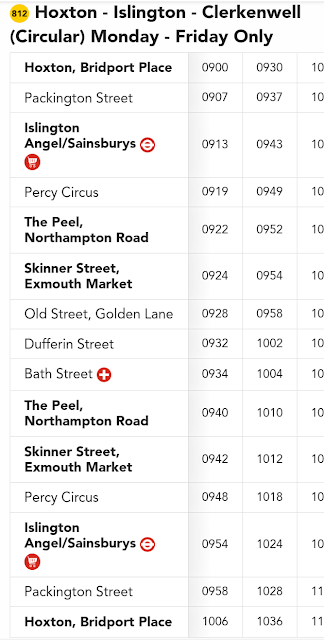 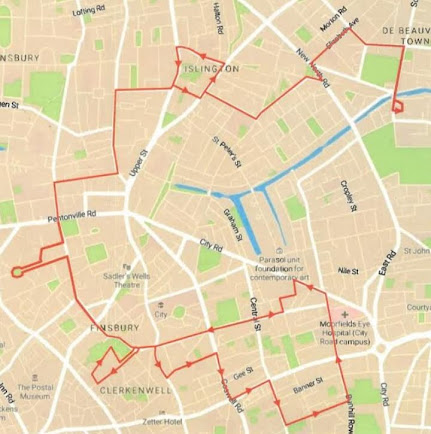 Again, like Mike Harris' cartography above, there are insufficient road names to help the uninitiated or even fbb. It is good that it runs near The Zetter Hotel ... 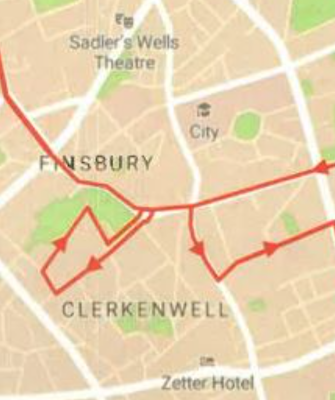 ... and, even more excitingly, the alluring "City"!!
Obviously most of this is pretty much irrelevant as the route breathes its last this Friday, but never let such detail cause fbb to flinch from a thorough investigation. So tomorrow we will take a virtual ride on the 812 starting from Hoxton Bridport Place.
Where?
fbb can tell you that Bridport Place is not a "Place" in the accepted sense of the word, but a road in two parts. 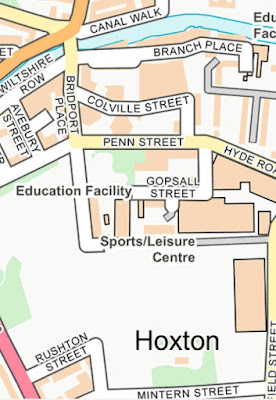 It runs (or more correctly, ran) between Canal Street (top) and Mintern Street (bottom) with the middle bit now closed to all traffic and part of the park. 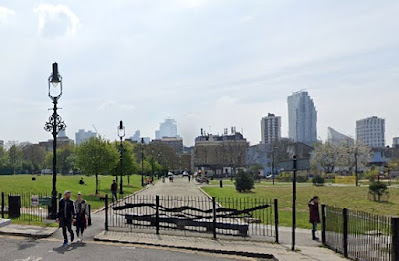 The park at Hoxton Bridport Place is called ... 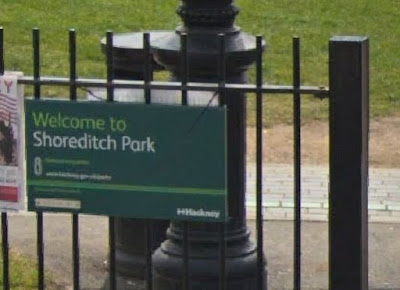 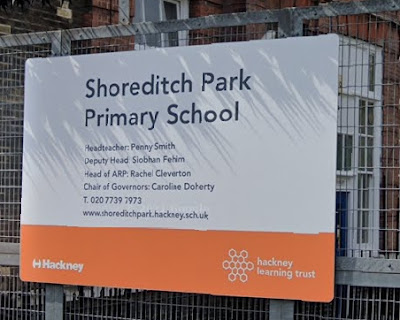 ... and there is absolutely no sign of a bus stop, layby, shelter or even a lonely flag-less pole anywhere on Bridport Place. 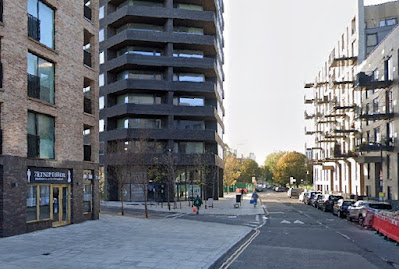 But Roger found a bus - but he has been here before - in 2016.
But we will be brave. If you are part of "the community", maybe with "812 PASSENGER" tattooed on your forehead, you will know where the bus stops.
Won't you?
More tomorrow!
STOP PRESS
BREAKING NEWS
HCT Group (operators of the 812)
A circular to staff from HCT senior management
HCT Group is in advanced talks with Stagecoach about the sale of HCT's London buses business. 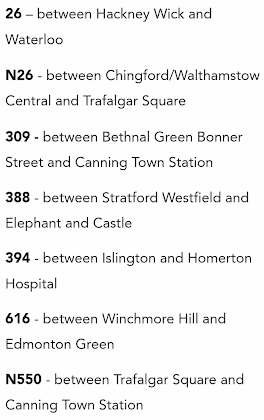 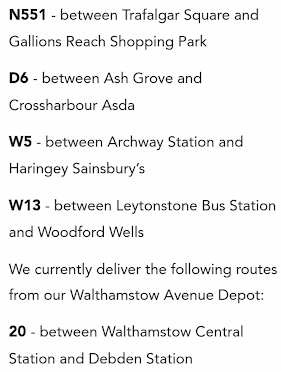 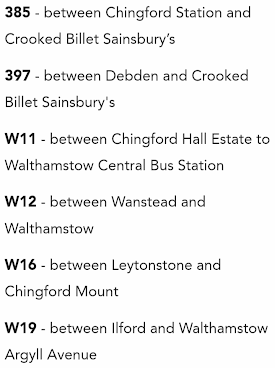 This work represents a very large percentage of the Group's activities. Left in the bag are Metrobus services operated for First and some tendered work in Bristol and local services in the Channel Islands.
Is the end "nigh" for the whole group?
It is not clear, at the moment, whether Stagecoach will actually seal the deal.
Next 812 blog : Wednesday 24th August
Posted by fatbusbloke at 02:00