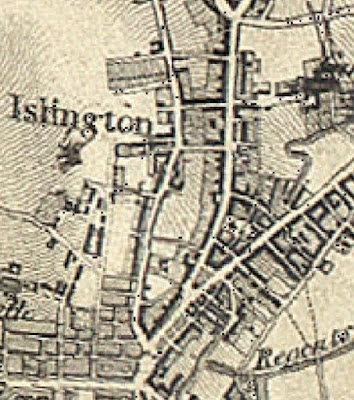 The above map extract is from the very first series of Ordnance Survey maps published between 1807 and 1874. The main road "shape" in unchanged today, 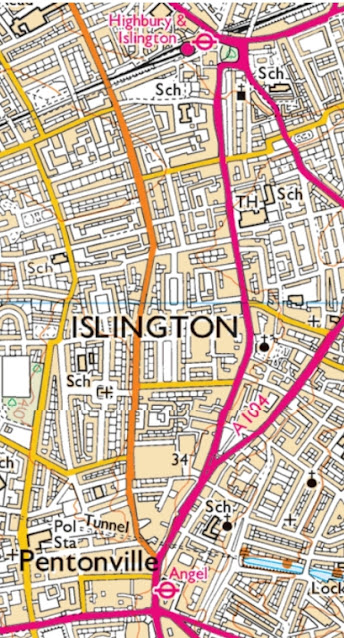 At the bottom of the above (modern) map next to "Pentonville" is Angel station on the Piccadilly Line. 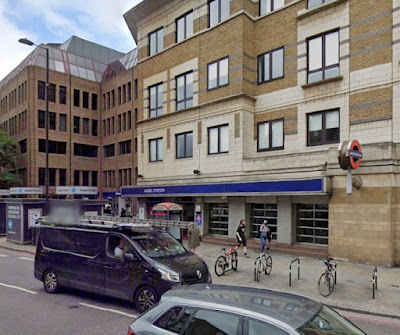 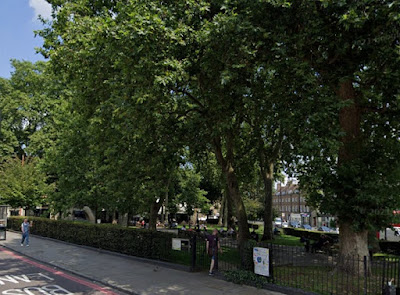 ... not quite the arbour of bucolic peace and tranquility that it one was.
Next up, as they say, is the very grand edifice of Islington Town Hall (not yet built in the original OS map's day). 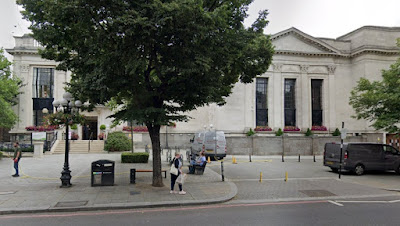 Finally we come to Highbury Corner, which used to be a squareabout ... 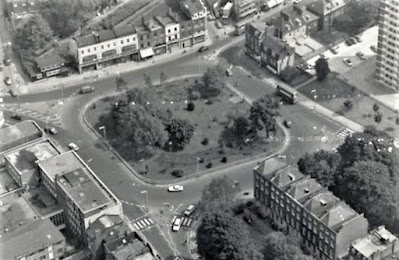 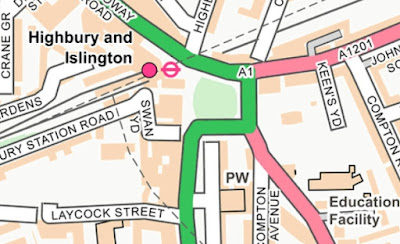 The straight-ahead bit of road is now pedestrianised with much improved  access to Highbury and Islington (Overground and Victoria Line) station. 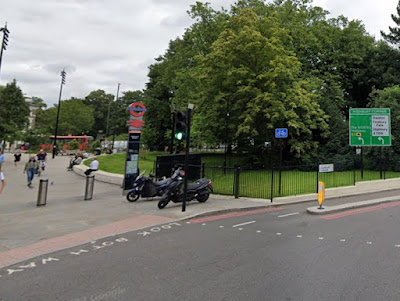 The road we have travelled from South to North is, of course, the A1.
It would be fair to say that the "centre" of Islington stretches from The Angel to the new wiggle.
Knowing that the 812 bus route was originally funded by Islington Borough, we could start our review of the route by seeking out its terminus somewhere along the A1.
Well it doesn't!  It runs "round the back" and calls at Tolpuddle Street off the main ORANGE road in the modern map above. 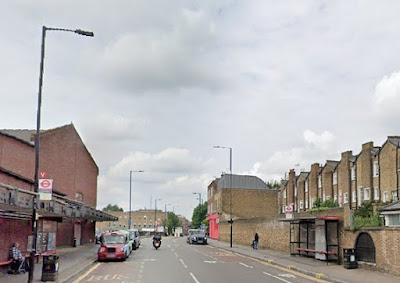 To help prospective passengers, the westbound stop is NOT called Tolpuddle Street (which it is) ...

... it is called Chapel Market (which it isn't)!! Of course the stop opposite is called ...

... and the Market thrives! 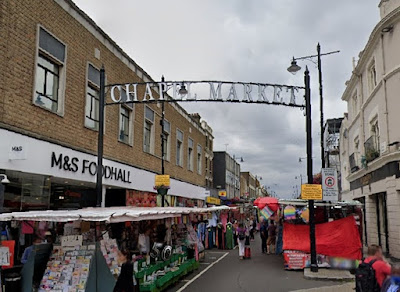 Maybe, back in 1933, when London Transport was being established, Frank Pick and his cronies erected stops ON Chapel Market and the buses went that way.
You wouldn't want Transport for London to rush into a hurried decision to change a bus stop name, would you?
fbb suggests "Tolpuddle Street Sainsburys". But, of course, that would be helpful and TfL don't want that at all; which is why they do not produce timetables of any network maps. Anyway, they wouldn't consider such a revolution for the 812, were it to continue, because it is not a proper red bus route.
Surprisingly 812 is on the flags. 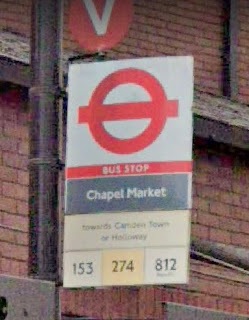 Will they remove the "C Plate" on Saturday? Maybe not - it will probably stay there for years.
Incidentally, HCT calls the stop Islington Angel/Sainsbury's ...

... although to find the tube station from the Tolpuddle Street stops might be a challenge for the uninitiated. Thankfully, it would appear that Islington still has a good "spider" map ... 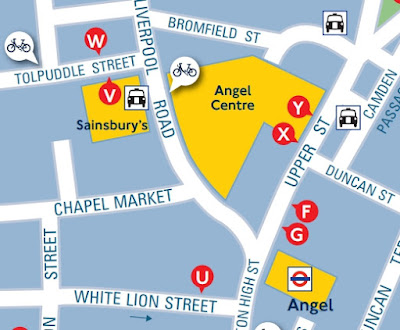 ... and, when Streetview visited Tolpuffle Street, there was a copy posted at one of the two stops. 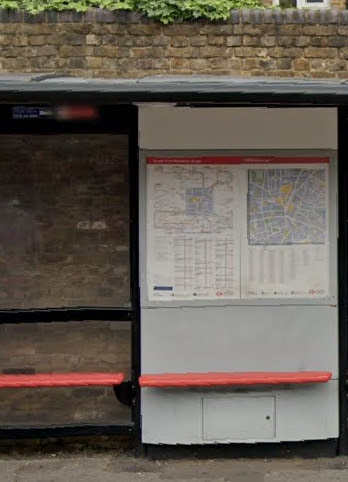 Well, we have Found our stop and are now ready to ride an 812, firstly to  Percy Circus ,,, 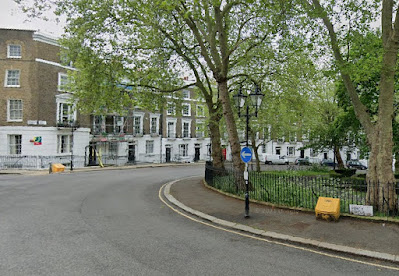 ... which looks very much like typically gentrified up-market Islington. Would there by many takers for the 812?
There is another nibble that does not appear on the Mike Harris map, but is shown on the HCT version 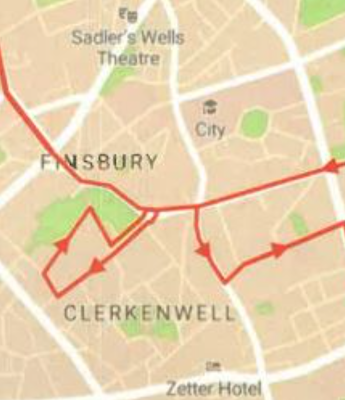 A little excursion via a bus only road ... 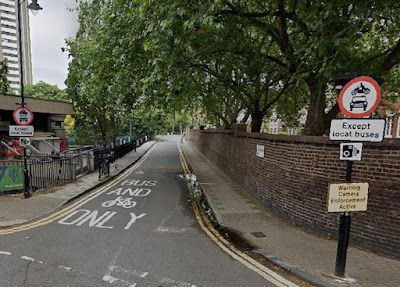 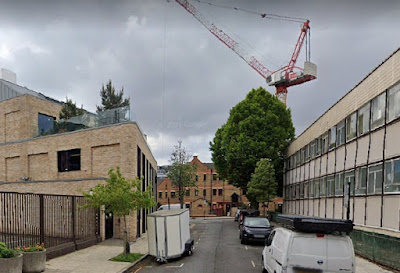 Again, would there really be demand for a half hourly bus. It used to run every 20 minutes!
TO BE CONTINUED when fbb has drawn a map!
More From HCT 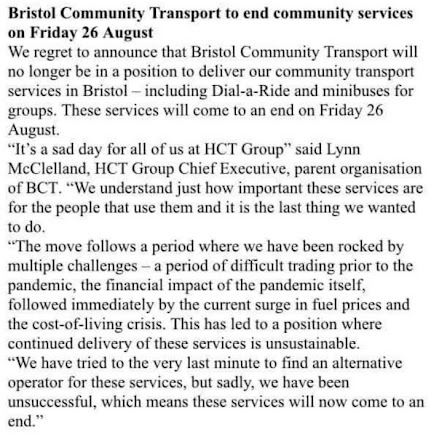 Other reports say that the company's "normal" bus services are not affected.
More details to follow - possibly!
Big Rail News
ABELLIO UK MANAGEMENT BUYOUT
Just received at fbb mansions.
A new UK-run transport company is set to operate four of the country’s rail passenger services and over 50 London bus routes by the end of this year.
A management buyout from the state-owned rail company, Nederlandse Spoorwegen will pave the way for a new UK-based company to take over all Abellio UK’s existing services, serving millions of rail and bus passengers in London, Liverpool, the Midlands and East Anglia. The new company will be called Transport UK Group Limited.
Led by Managing Director Dominic Booth... 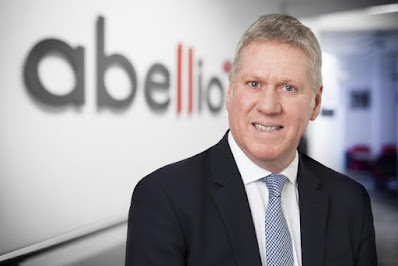 ... who has decades of experience running public transport services in the UK, this deal has been widely welcomed by industry partners and experts. Completion of the buyout deal is subject to formal approval from partners including the Department for Transport, Transport for London and Merseytravel as well as regulatory consent from the Office for Rail and Road.
After 20 years in the UK Nederlandse Spoorwegen has decided to withdraw from the UK market to focus on domestic service provision within, and international railway services to and from, the Netherlands.
Mr Booth has done quite well since his early days as manager of Island Line.
More details follow.
'Twas a tad frantic yesterday evening so apologies for a certain discontinuity in today's blog.
Next 812 blog : Thursday 25th August
Posted by fatbusbloke at 02:00