Buses on Mondays And Thursdays 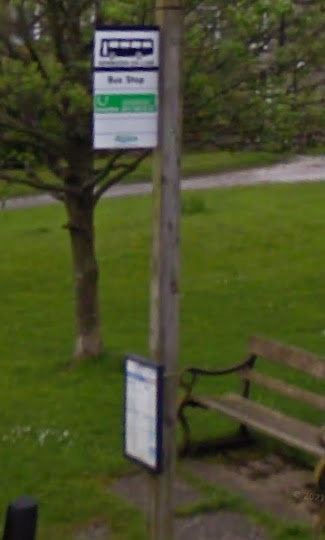 ..., Tebay to Kirkby Stephen, 570, 571 and S3. But this generosity is not the effulgence of omnibological profusion that it might seem at first glance.

571, according to the company timetable, is run by Cumbria Classic Coaches on Mondays. 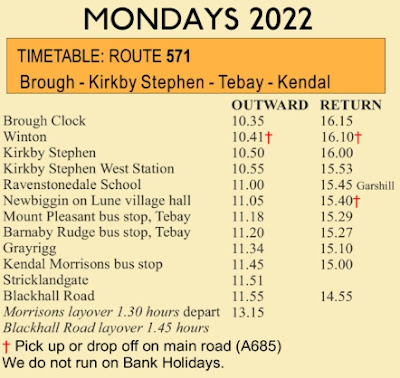 It provides a reasonable amount of time to shop at Morrisons (Kendal) ... 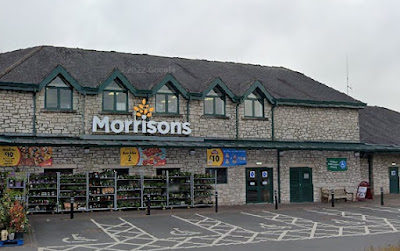 ... which shares an edge-of-town site with Halfords, B&M and Aldi. 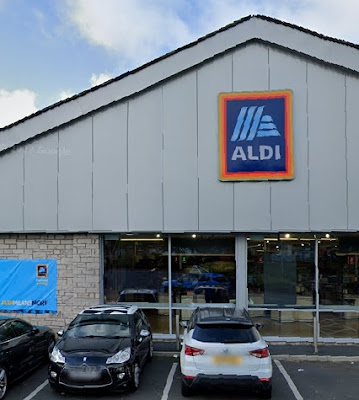 It also allows time at Blackhall Road, which, as we all know (?), is Kendal bus station. 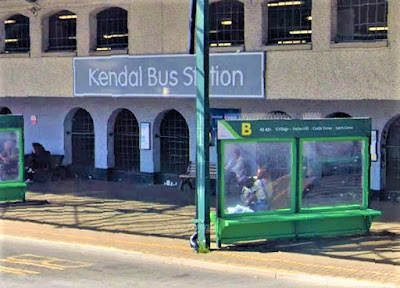 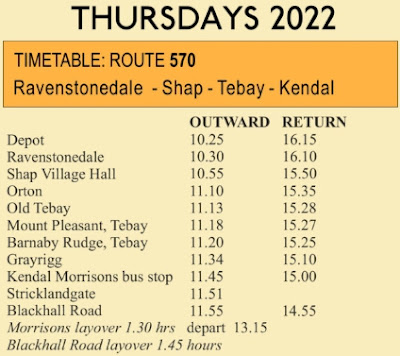 Although the 570 is shown running along the A685, it provides no times between Ravenstonedale and Shap. The Classic Coaches depot is near Ravenstonedale and you might have thought a call at Newbiggin on Lune would be natural.
But it isn't.
There may be a reason for that - as we shall see.
The company is proud of its service for weddings etc. and has a superb fleet of classic vehicles. (There is a clue in the company name). 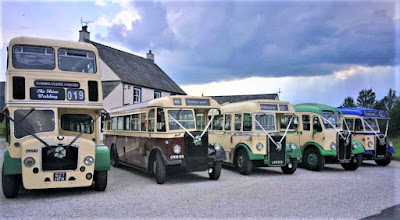 The fleet has varied over the years, but the company only advertises its Wednesday schedule as being operated by a "classic" vehicle during the Summer. 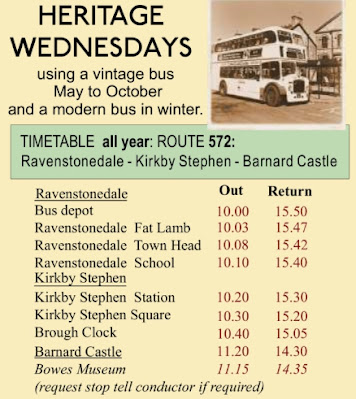 But their web site does emphasise that ALL their routes are real bus services and your OAP pass is valid throughout. From Newbiggin, you would have to walk to Ravenstonedale School to pick up the classic bus to Barnard Castle, but, if it were a double decker, and IF the weather were fine, you would be sure of glorious views from the top deck over Stainmore.
Indeed, the trips would all be lovely rides, even on a boring old single decker "modern" (?) vehicle. 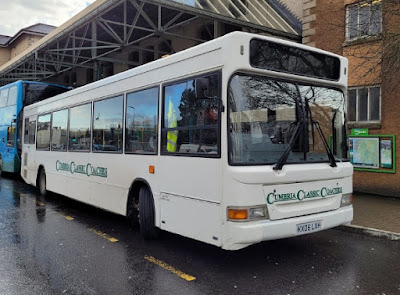 For the record, Classic now operates what little is left of the former Stagecoach 106 which used to be hourly six days a week. (If fbb's memory is reliable on the frequency). 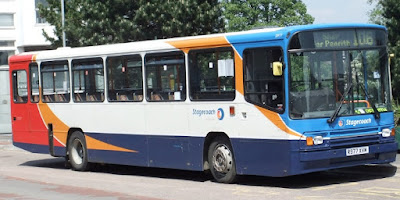 In recent years it has staggered to survive. Currently Classic ... 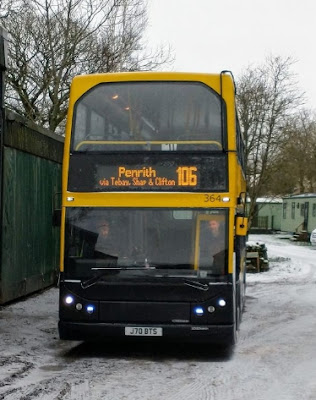 ... runs on two days a week, Tuesdays and Fridays, with just two round trips Tebay to Penrith with one to Kendal. 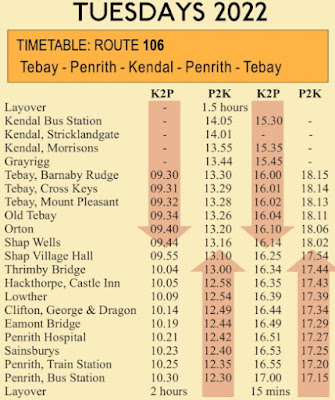 The Friday times are slightly different.
Meanwhile, back at Newbiggin on Lune ...
... despite the non appearance (presumed) of the 570 on Thursdays, you have a better service from ...

There are three journeys each way following a similar route to the 571. 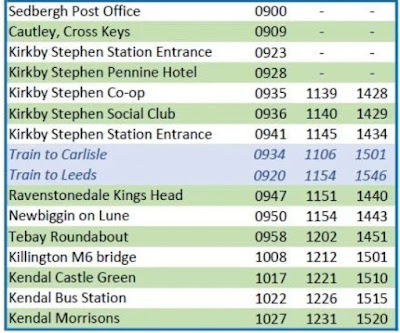 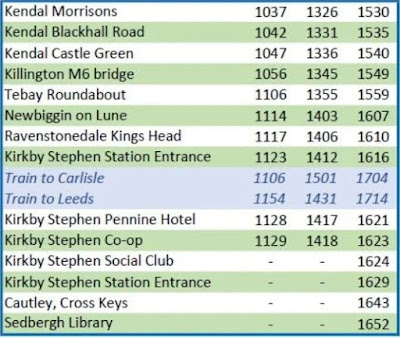 ... with positioning runs from and to Sedbergh.
The train connections at Kirkby Stephen are NOT well explained and really need more work, especially as some of them look very much like pointless missed connections!
But, as well as Kendal, you can go to Kirkby Stephen for shopping and a leisurely lunch.
And, once you work it our or take advice, there are some good train connections for the fleshpots of Carlisle or Leeds. 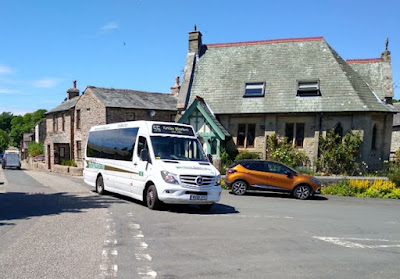 And, unlike the 571, the little bus brings you back to where you started, in the village of Newbiggin on Lune. When the promo pictures were taken, the possible former pub was displaying a significant poster for the footy. 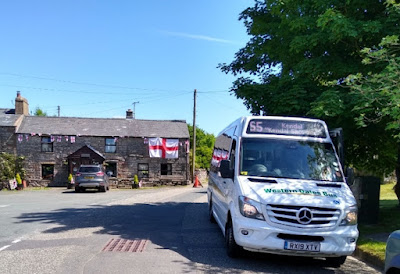 The route is numbered S5, and not S3 as shown on the Cumbria Council map.
There are four more S routes in the Western Dales network. 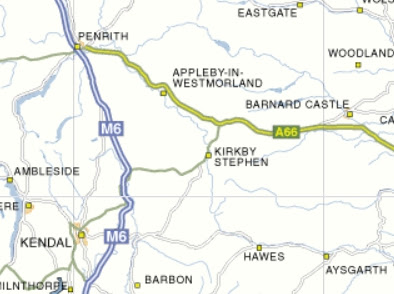 The S1 runs on Saturdays from Dent (with train connections at Dent station (which is miles from Dent) including early evening links from railway to Sedbergh in the Summer,
There is no S2.
S3 runs (Wednesdays Summer only) from Dent station to Hawes.
S4 (Fridays) links Dent Village with Kirkby Stephen and Brough.
S6 (Tuesdays) links Kirkby Stephen and Penrith.
These volunteer-driven community minibus services are a sensible way to provide buses to a few needy passengers, car-less in a rural area.
IF you can recruit the necessary drivers. IF?
If you are in the area, do remember that these routes also take you through some really glorious scenery. 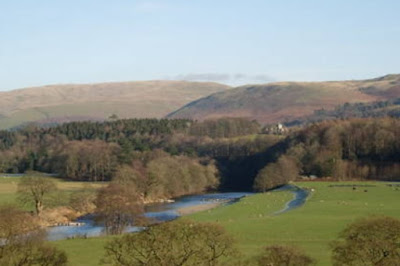 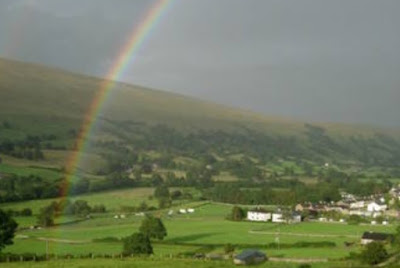 Bootiful. Grand.
Coaching Confusion Cascades Complaint
COACHING
Setra is now owned by Daimler and the company has recently revealed its latest and, some would say, most stylish coaches. 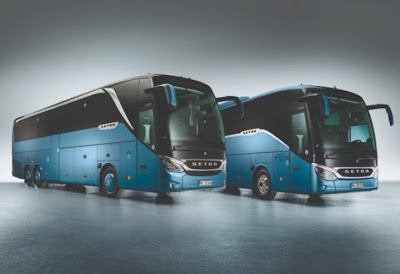 One will cost you quite a lot of pretty pennies.
CONFUSION
But whilst looking at coaches, what is different about this Irizar? 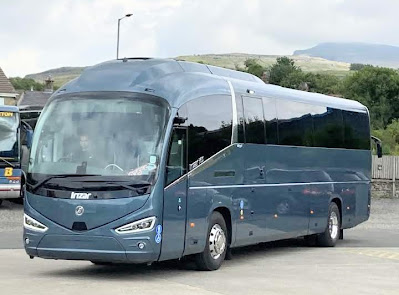 Answer tomorrow.
CASCADES
And pity "the lads" at Stagecoach's Worksop bus depot as they were obliged ... 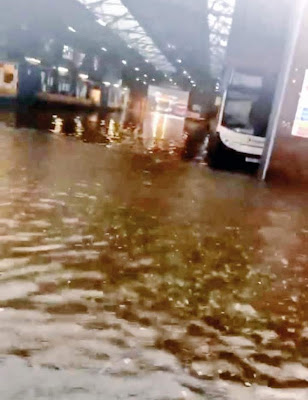 ... to paddle earlier this week.
COMPLAINT 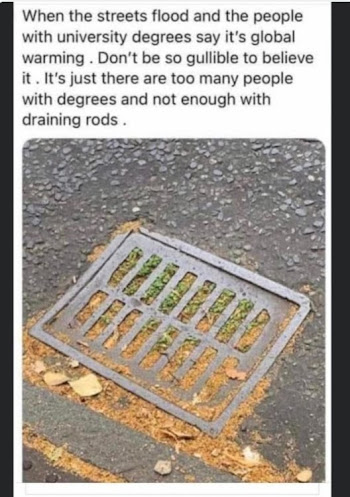 Valid point!
Tomorrow we add a P.S. to Newbiggin on Lune.
Next Nostalgia blog : Friday 19th August
Posted by fatbusbloke at 02:00