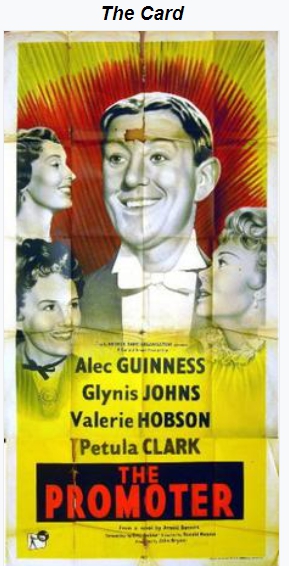 Arnold Bennett's novel was made into a film in 1952 (with change of title) and "everybody was in it" (!) as was often the case with good-old British Films. Back then, Petula Clark (as Nellie Cotterill) was just a young gell. 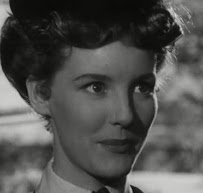 But fbb's "card" was one chosen by Mrs fbb for the nth birthday of his ex brother-in-law, now suffering with dementia. There is always the possibility that a bus picture might awaken something in the dark and confused depths of his mind. Most of his working life was in the "back office" of the bus industry. 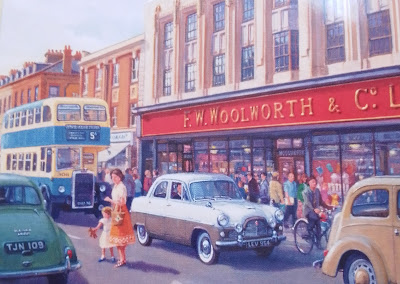 But you wouldn't expect a bus blogger to be satisfied with the title as printed on the reverse thereof, would you? 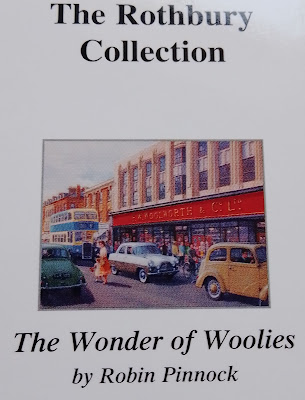 So lets start with the bus. fbb's first guess is Sarfend (sometimes called Southend!) because fbb can vaguely remember riding on a route 5 back in the sixties when on an exploratory visit. And that front end is distinctive of it's body type. 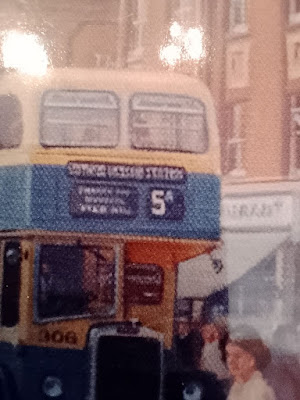 It doesn't enlarge well, but the fleet number is 306 and a search via the dreaded Google reveals just the job, just the bus and just the route 5A to boot! 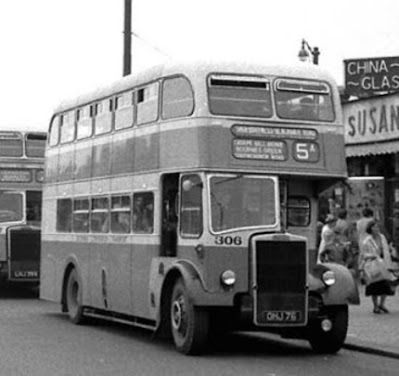 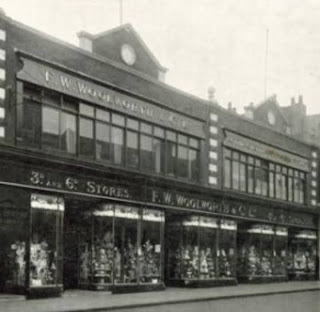 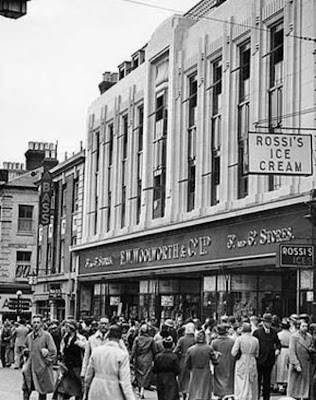 Now back to the painting on the card,  The shop next to Woolies is there, as is the side road. 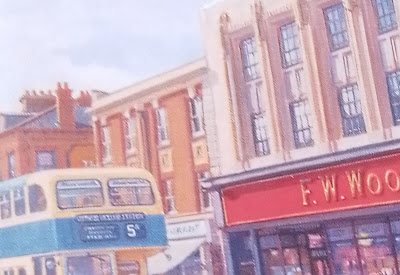 Most of High Street is now pedestrianised but both properties still exist, the store being H&M ... 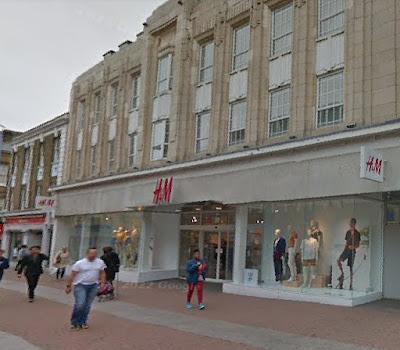 ... at least it was when Streetview wandered past.
Card fully identified; fbb loves the old cars; his dad had a Ford Consul (KRP 996) of similar vintage to the Zephyr in the picture.
Busy Bus Time At Seaton
Photographed yesterday morning from the coffee shop. 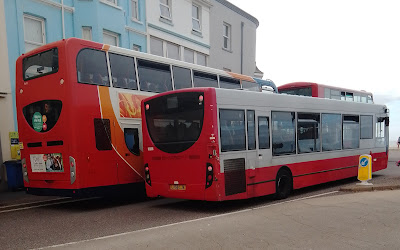 On the stand at Marine Place (Seaton Sea Front) you see Stagecoach 9A awaiting its return to Exeter. Until recent changes there would have been two Stagecoach buses here, one for Exeter as above and one for Lyme Regis.
Hidden at the front is Axe Valley Travel's new route 373, part of five journeys replacing Stagecoach's hourly service. The bus is waiting expectantly for passengers transferring from Stagecoach for the former through journey to Fossiltown. There were none.
The bus then moved round to Jubilee Clock, the official departure stop for buses going east  ... 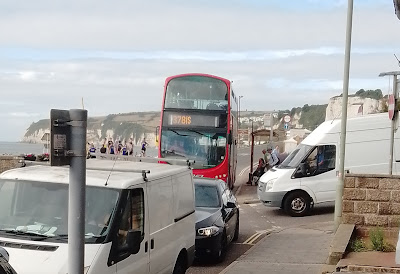 ... where just thee passengers boarded.  You can see why Stagecoach pulled out!
The single decker is setting off westbound for Beer.
Also lurking was ... 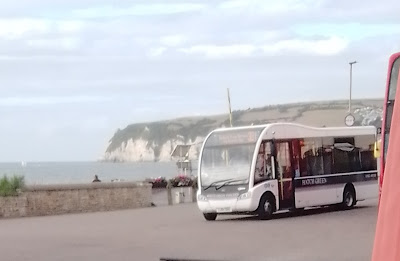 ... the bus on Seaton's town service run by Hatch Green and still, amazingly, providing a Saturday morning service. One of the "girls" (!), joined for coffee by the fbbs, travels from home and back thereupon.
Arrival, Possibly Depart-al?Arrival is a newish start-up company with its UK base in Banbury. It specialises in electric vehicles, or will, once they are fully developed. The electric car, aimed at Uber, is, perhaps, the vehicle with the highest PR opportunity.
But the rather less "exciting" electric van is the first to approach real sales potential. 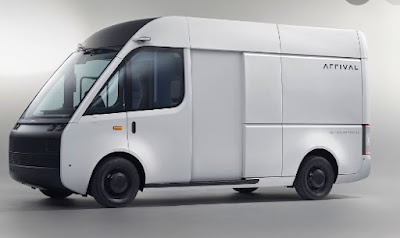 Its other proposed product is a really ugly (or visually revolutionary, depending on your point of view) single deck bus. 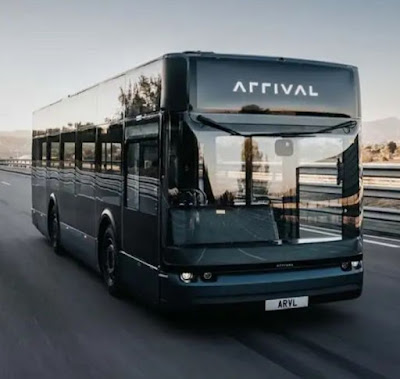 A real one has been spotted at Banbury (below). 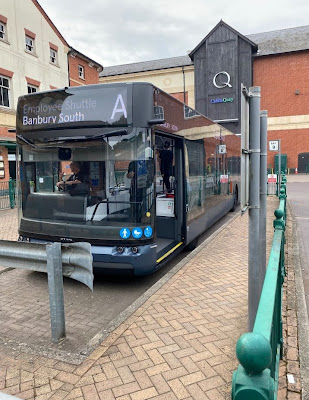 Comments on twitter were full of extremes. One twitterer said the vehicle was wonderful; whilst another suggested that the company should try asking a bus manager what to build.
Lots of curved glass, just where it might meet a car's wing mirror, is very expensive to replace. One also commented on the stretch panels, a technology which fbb didn't quite grasp.
Stretch panels literally hold the bus together and are very expensive to replace. Apparently Arrival's stretch panels are, again, too easy to crump!
But things don't look so good at Arrival.
The company has proposed a reorganisation of its business “in response to the challenging economic environment”, it said in a statement to investors. The reorganisation “could potentially impact up to 30% of employees globally”, it added.
Arrival employs 2600 globally, the company said in April, meaning that 780 could be made redundant if the company goes ahead with the proposed 30% cut in numbers. The majority of Arrival’s employees work in the UK. Around 70% of Arrival’s workforce are engineers, it has said.
Another article suggests that development of the Uber Car and the bus will be suspended until revenues from sales of the van start building up.
Or maybe until a further source of finance is found.
Do we see a disaster on the horizon?
Advertising Old-Style 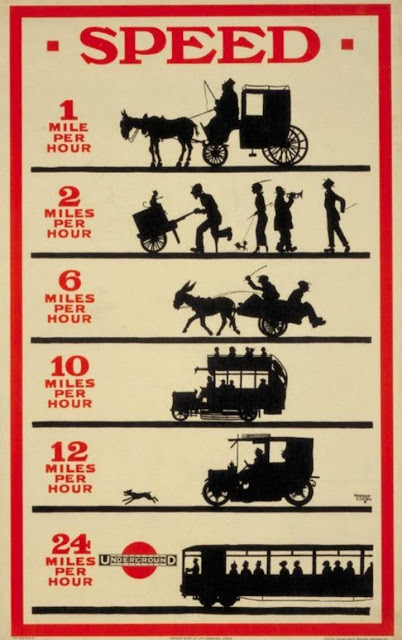 The "Old Bill" bus dates from 1911. How have things improved over 100 years later?
TfL continues to publish average bus speed information in its budget and annual report. The target for average bus speed in 2020/21 is 9.3mph, compared with a 2019/20 forecast of 9.2 mph.
Oh, they haven't!
Book Review : Biased Report? 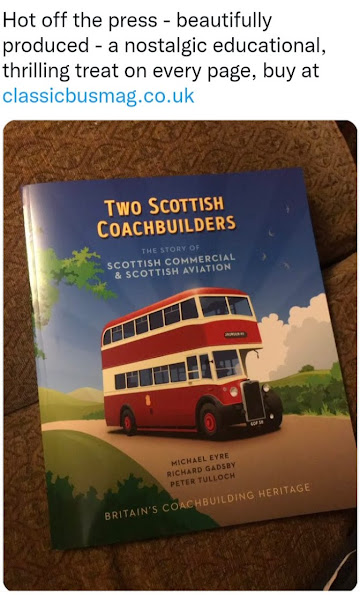 The tweet was from Ray Stenning, The Bearded Bus Beautifier from the Bush.
fbb wonders who designed the artwork for the book?
Despite Ray's obvious reticence to own the design process (?), It will be good!
Next Variety blog : Monday 22nd August
Posted by fatbusbloke at 02:00