More, Much More For More 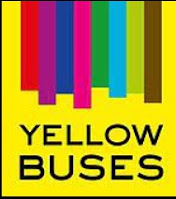 Yellow Buses (formerly Bournemouth Corporation Transport, next owned by RATP and lately under a Management buyout) closed its doors yesterday evening. Hopes of finding a buyer, reputedly National Express, were dashed and closure was then inevitable.
GoAhead's More Bus (formerly Wilts and Dorset, formerly Hants and Dorset) had already promised to provide replacement services if the sad (???) inevitability became inevitable. What has surprised bus watchers is the speed at which this replacement network has been publicised.
Note that there are no changes to any current Morebus services, the replacements are all additional to the present network.
You would think that Morebus has been planning it for some time!
On Wednesday evening, just 24 hours BEFORE Yellow Buses died, More were advertising the replacement routes and frequencies, although not the actual timetables. 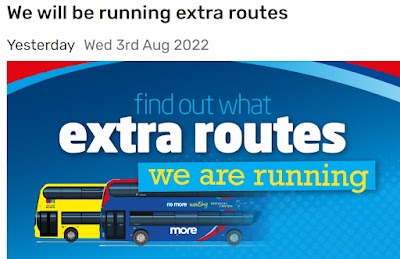 Following the news that Yellow Buses has entered administration and will cease trading later this week We are stepping in to run more services across Bournemouth from Saturday 6 August.
We understand that there will be many residents across our region who will be impacted by this, and we are pleased to announce we are running the following routes.  However, it is important to note that these are not the same timetables and in some instances, the route has been slightly altered.  These timetables are the basic frequencies we can offer to begin with, using available buses and drivers.  We will review if we can offer better frequencies in the near future once we have the resources to do so.
We have moved additional vehicles to the area, in order to provide the service needed - including 15 brand new Euro 6, low emissions, buses that Morebus and Bournemouth University have invested in. These were delivered ahead of schedule and are ready for the road - so that our current fleet can be used to fill the gaps left by Yellow Buses.
In essence from tomorrow, More will be running a very respectable service on all Yellow Bus commercial routes except those already operated in competition with More.
After the sad conflagration which destroyed Bournemouth's iconic double deck bus station in 1976 ... 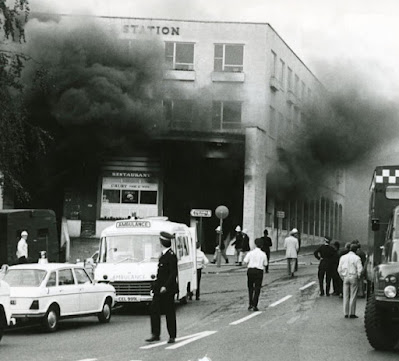 ... Hants and Dorset moved their departures to "The Triangle", a little outside the central shopping area. 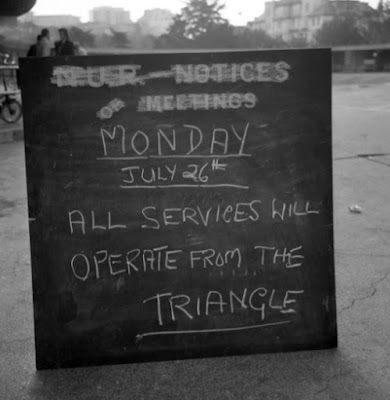 From this cramped site ... 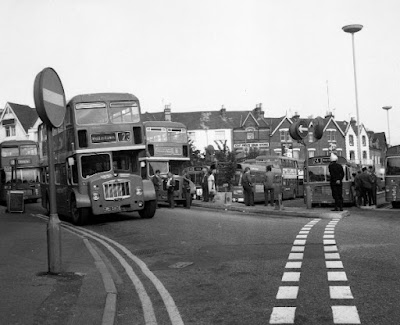 ... buses ran very frequently between Bournemouth and Poole.
With the onset of privatisation and deregulation, competition crept into the main routes that ran parallel to the coast. Although some of the fiercest (and self-destructive) competition has been reduced, the situation until yesterday's demise was like this:-
Morebus ran frequently between Bournemouth and Poole, as ever, but extended services into traditional Bournemouth Corporation territory.
Here, in the red and blue corner ... 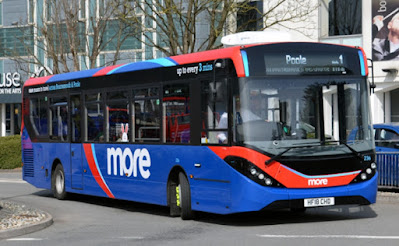 ...  is an extract from the current Morebus route m1 and m2 timetable.

The m1 route to Castle Point and the Hospital is also Yellow Buses route 3.
But, in the Yellow Corner ...

... the former municipality still intrudes on the Poole corridor with a bus every 30 minutes - it used to be more frequent. 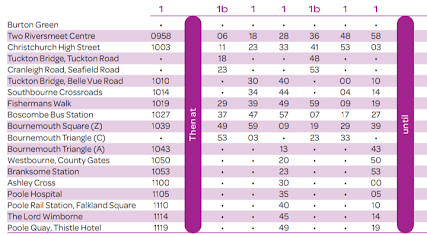 From Saturday, the services east from Bournemouth are mostly unchanged ... 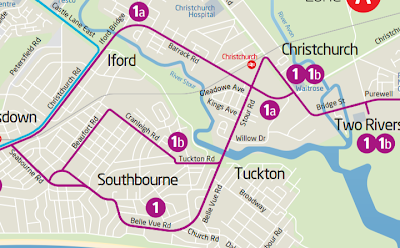 ... but the replacements will go no further east than Somerford and will not run between Bournemouth and Poole. 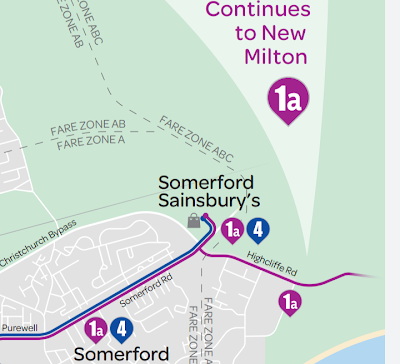 Passengers for New Milton are directed to the current Morebus X1 and X2.
First pushed its 1a well into Morbus territory from April 2019. 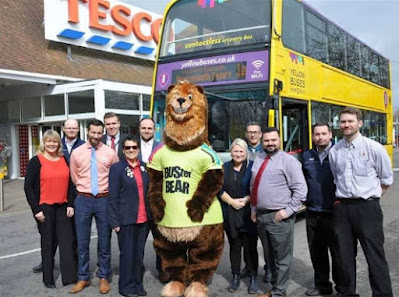 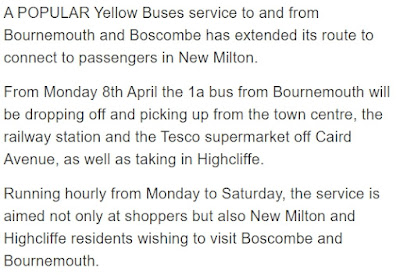 Perhaps Buster Bear frightened small children rather than encouraging them to travel with mumsy!
Yellow Bus 3 via Charminster Road ... 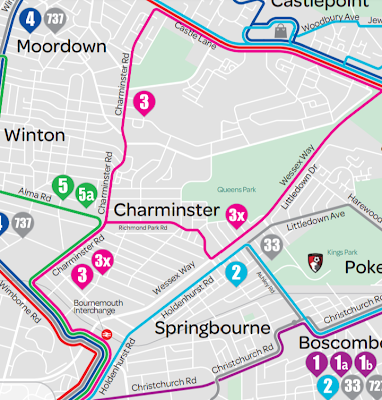 ... is covered by Morebus m1 (also via Charminster Road DARK BLUE below) so will not be replaced. 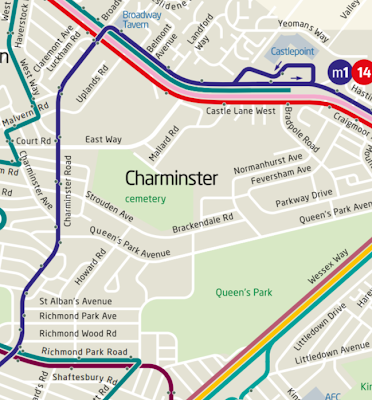 Whilst at Castlepoint and the Hospital, we note that Morebus will be running a version of routes 2 and 4 as a circular ... 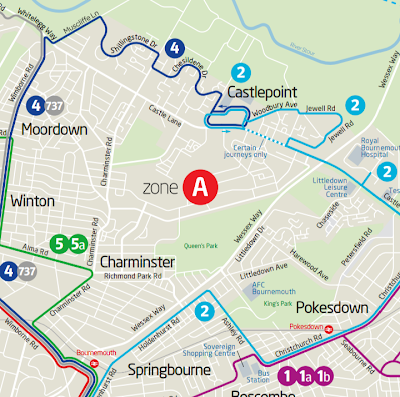 ... with a few loose ends not replaced, or covered by other services.
Yellow 5 and 5a are replaced by something very similar .... 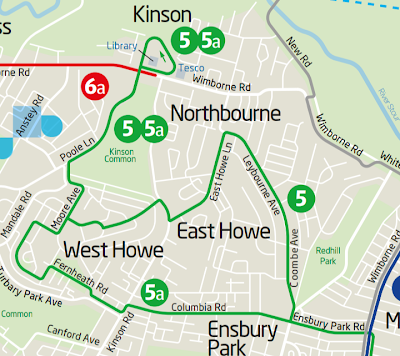 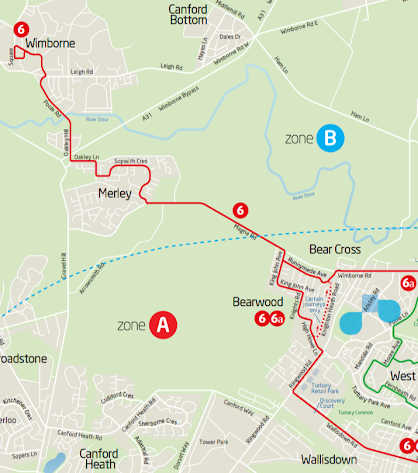 ... loses some of its Yellow "country" ramblings.

More will be running limited journeys to the airport on 737 ... 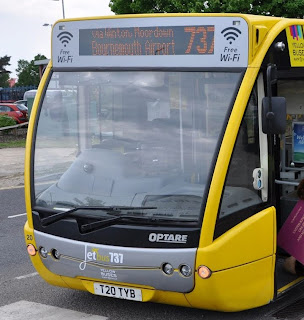 ... a direct replacement for an equally limited Yellow Bus service. 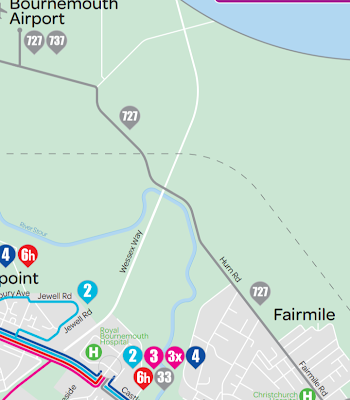 Were these tendered journeys?
There are numerous other routes, shown in grey on the current (until this evening) Yellow Bus route map, which fbb assumes are tendered services. Morebus is not, as yet, offering to replace those.
Under the circumstances this represents a gargantuan effort by Morebus - to which can be added their offer to take on Yellow Bus drivers at an improved rate of pay.
For those employees who previously worked for Yellow Buses, and who are interested in joining Morebus we’d love to hear from you.  Morebus is increasing its rate of pay from this coming Sunday 7 August, to £13.00 an hour. And, for a limited period, we will continue to offer our £2,000 welcome bonus for anyone who joins with a PCV licence. We will be announcing details on Thursday 4 August of our recruitment centre which will be open from Friday morning, where we will ask you to turn up in person if possible. If you’re away on holiday you can still apply in the normal way apply here.
There can be no doubt that Morebus have had a plan in place for some time, just in case. Nevertheless the vast majority of the distraught bus passengers of Bournemouth will only be without their services for one day.
Well done GoAhead in the shiny skin of Morebus!
A Brief History (c/o Morebus)
The origins of Morebus can be traced back to 1916, when a bus company called Bournemouth & District Motor Services was founded; this became Hants & Dorset Motor Services in July 1920 as the network of routes expanded. Hants & Dorset was always highly regarded for offering a reliable and friendly service. The Southern Railway bought into the company in the 1930s and Hants & Dorset became state-owned in 1948.
From 1 January 1969 Hants & Dorset became part of the National Bus Company, and in 1972 the bus livery was changed from the longstanding and familiar green to poppy red. Hants & Dorset was broken up into smaller units from April 1983, one of which was the Wilts & Dorset Bus Company whose area of operation included the present morebus network and sister company Salisbury Reds in Wiltshire.
The Wilts & Dorset Bus Company was bought by its local management team in 1987, and has been part of the Go-Ahead Group since August 2003.
The More brand, with its distinctive blue livery was first seen on the Poole to Bournemouth m1 and m2 routes in 2004 when an investment of £4 million was made in a fleet of 30 new Volvo single-deck buses, and has subsequently been rolled out across the network.
Please note : the second part of "The Village" will be incorporated in tomorrow's blog.
Next Variety blog : Saturday 6th August
Posted by fatbusbloke at 02:00