C T Plus is the trading name of H C T (Owners also of Powells). This note was added to yesterday's blog mid morning, so early readers may have missed it. 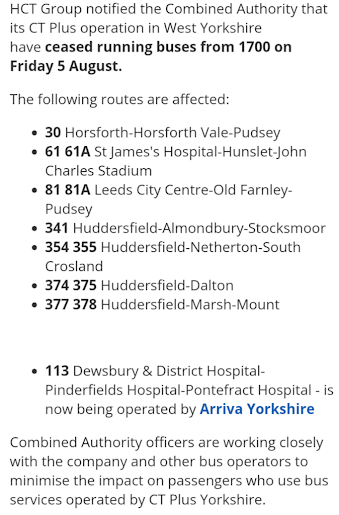 C T Plus operates a range of tendered services in West Yorkshire. Powells does ditto in South Yorkshire. It is not that long ago that H C T (the parent company) also pilled out of Manchester.
These are not the best omens for the future of the group as a whole!
Technology Is Wonderful 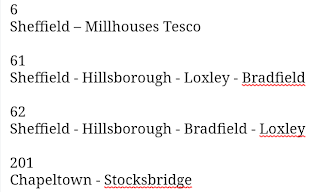 The red underlining means that fbb's Spool Chucker does not know the wotd concerned. So, why oh why, does the technology know Loxley when it appears against service 61; but has forgotten is when it is used for service 62?
Answers accompanied by a £10 note to fbb at the usual address!
For the record, the three routes that Stagecoach has taken on from Powell's are:-
service 6 to Carter Knowle Road. 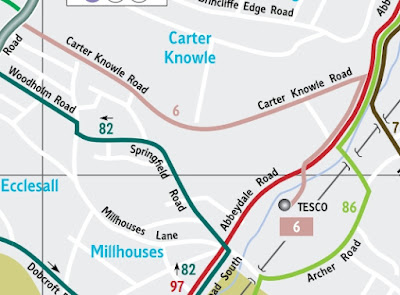 This long residential road never had a bus service to city, being part of Sheffield's much-missed outer circle route 2 and 3.  It appeared as route 74 in post deregulation lunacy and the network has retained a service ever since. 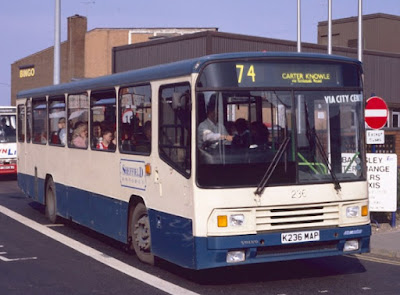 Service 61/62 to Bradfield. In Sheffield Transport days these were 16 to Low Bradfield and an occasional 116 to High Bradfield. Northern Bus (successors to Wigmores of Dinnington) developed quite a network based on Hillsborough. 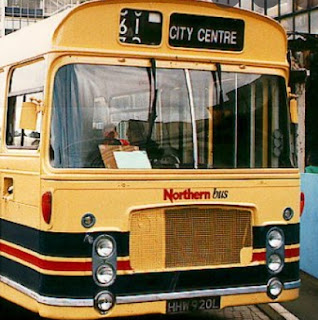 The routes now runs as circulars (both ways round) terminating at Hillsborough interchange. They are tendered. 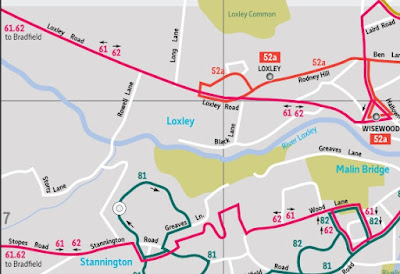 The route (best way round is 62, anti-clockwise) is particularly picturesque but sadly has never been promoted as just a "good ride round". 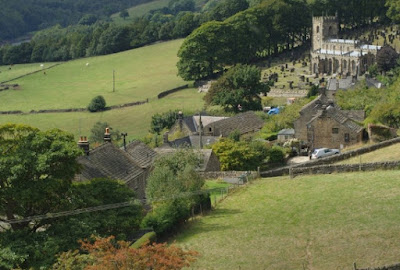 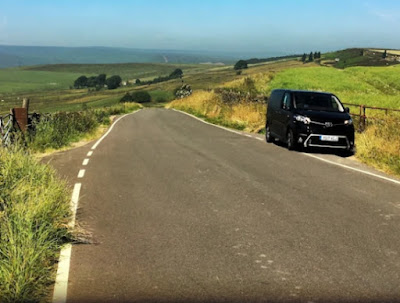 Gorgeous!
Service 201 is a real oddity. It used to start from Sheffield and rambled round a number of new industrial and trading estates on the edge of the city. It now runs from Chapeltown via the Wentworth Industrial Park (box at top of map) 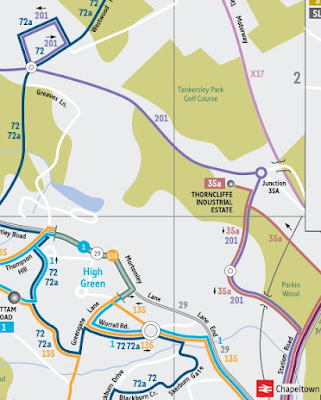 ... and on westbound to Stocksbridge. 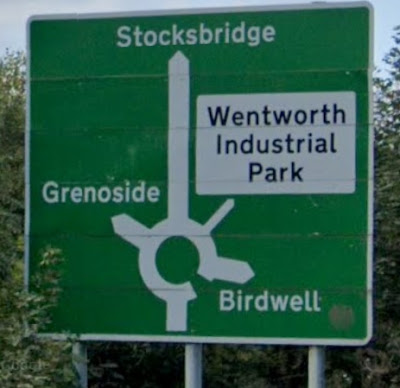 You can see why the route is tendered! 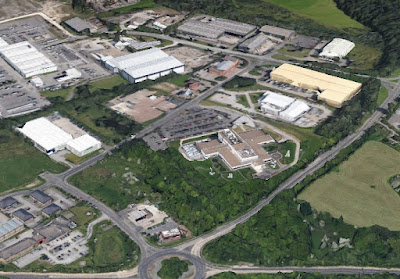 No doubt we will hear more about replacement services as the days go by.
By Tram From Crystal Palace To Orpington
Yikes. Transport for London has kept that quiet! 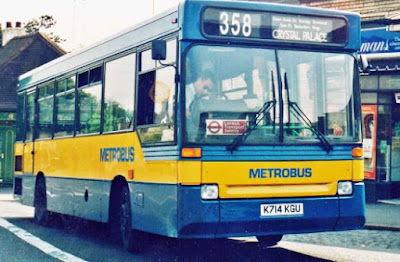 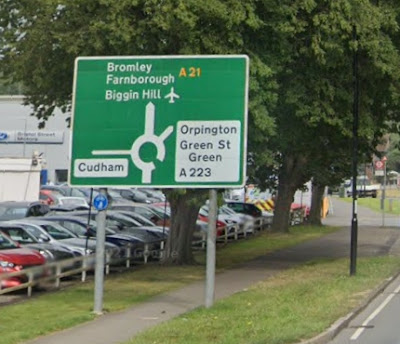 The name originates from La Grenestrete c.1290, meaning the green or grassy hamlet. It is recorded as Greenstreet Green in 1819, the addition of the suffix Green, referring to a village green. 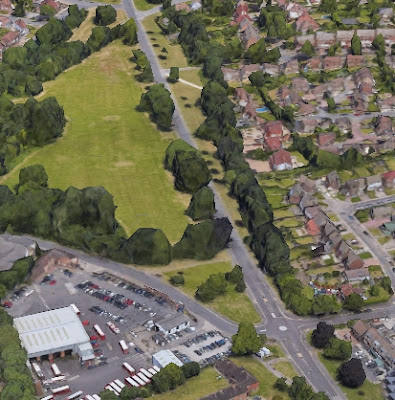 It is a very big green! The route, still numbered 358 now run VIA Green Street Green to Orpington, and still calls at the picturesque Locks Bottom! It is a long wiggly route ... 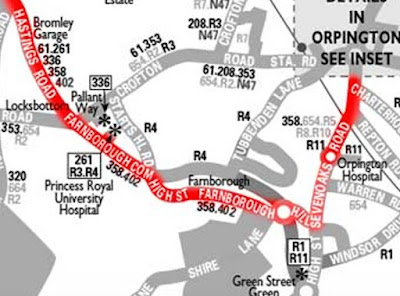 ... quite unsuitable for trams!
But worry not, dear reader, fbb is being his usual abstruse self.
Spanish bus builder Irizar ...

Irizar's illustrations are very dark, but fbb thinks that the idea is that the bus looks like a tram, because its wheels are boxed in, thus making it harder to maintain and deal with punctures. But it looks trendy! 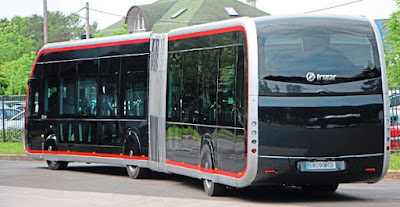 And it is electric!
GoAhead (owners of Metrobus) have ordered some non-articulated versions for the 358.

Smart? But it is only a bus! 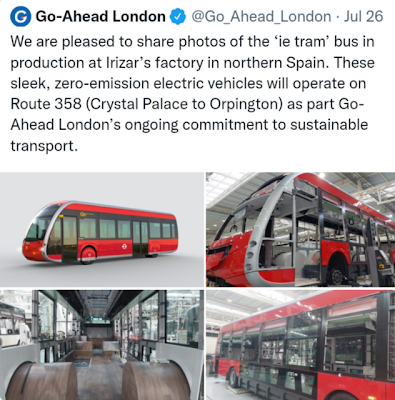 First Bus had the same idea with these ...

... running in Leeds/Bradford, York and Swansea (but not electric!).
Whatever happened to the ftr of bus travel?
Amazon Buys Roomba
Public Transport for cats! This tweet popped up in fbb's in box yesterday! 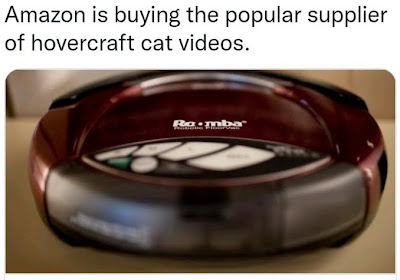 And here is a cat enjoying the ride! 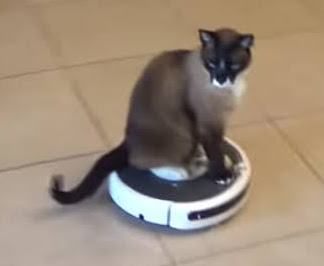 Apparently a "Roomba" is one of a variety of robot vacuum cleaners of used in YouTube videos giving rides to unusually compliant cats.
Faced with such indignity, the fbbs' Mr Tubbles would exit stage left at great speed!
Roomba also make other domestic stuff but their vacuum cleaner is, currently, the best known. 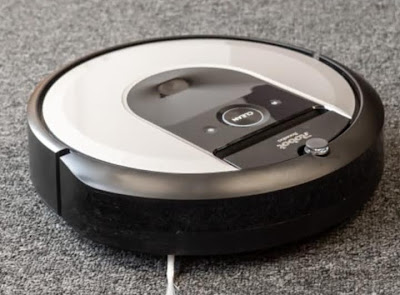 It's A Small World!
Lunch in the Tramstop Cafe at Colyton again yesterday. Yummy! The fbbs sat on the former station platform watching the trams come and go. At the next table were an elderly couple (possibly even more elderly than the fbbs) and conversation developed as your author and his Mrs chomped their lunch.
fbb first stayed in Colyton when he was 8 lured there by an obscure relative of his paternal grandmother. Rita Waters (nee White) lived here, on Rosemary Lane. 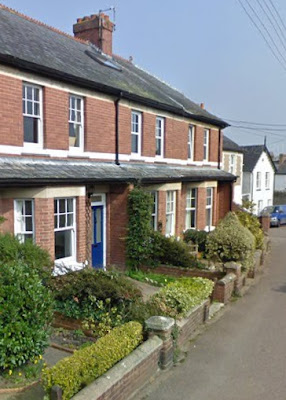 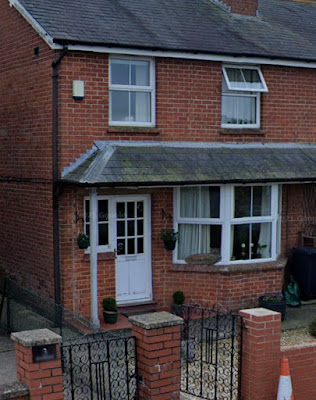 It turns out that the fbb's dining companion had lived in Colyton all her life. Her mother lived next door to Mrs Heard and was the best friend of Rita Waters! It is possible, but impossible to confirm, that she (the mum) was the lady why fixed up the accomodations for the boy and his granny some sixty years ago!
It is a small world.
The Tramway do a "Fairy Tram" for childrens parties; and one such working duly pulled in to Colyton tram stop as the fbbs munched. 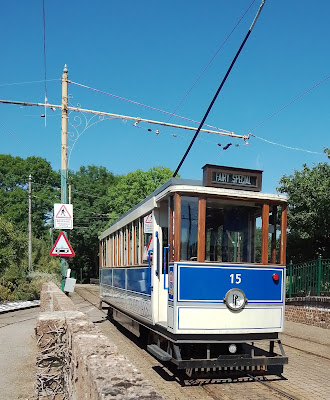 fbb did not recognise Tram No 15 as it looked quite new and had metal banding on the side panels. Fortunately the fleet list offered an explanation. 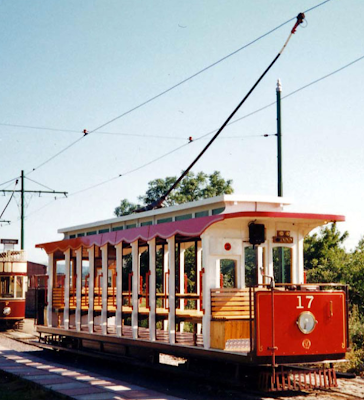 fbb much prefers the old version, but guesses that the Health and Safety Police were concerned about happy tram riders falling out of their less well protected seats. Below is the conversion in progress. 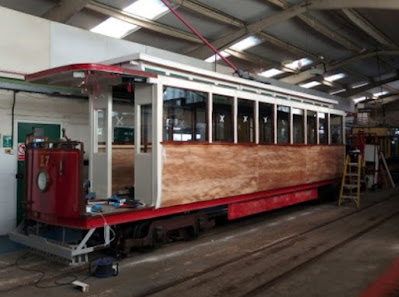 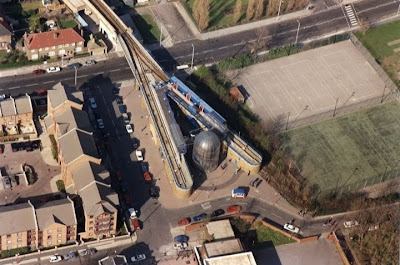 Where was it? It is not there now! 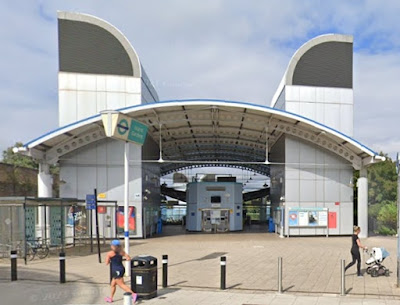 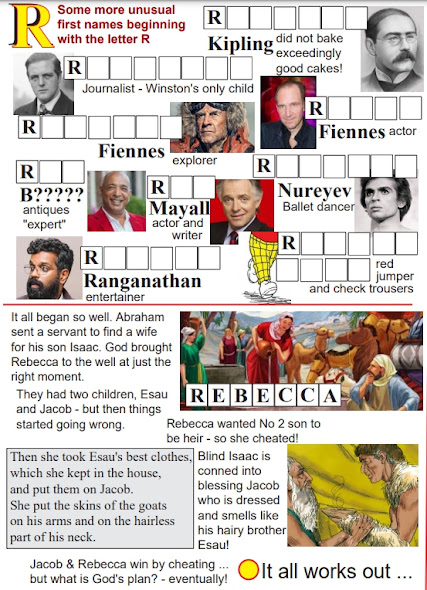 The leaflet then goes on to take a brief look at Rachel (one of four women in Jacob's life - very EastEnders), at Rahab (a prostitute) and Ruth, a foreigner, whose child was the grandfather of King David and one of the human ancestors of Jesus.
The duplicate Sunday and Monday fellowship meetings will look most closely at the fascinating and powerful story of Ruth.
Which reminds fbb.
Depending on exhaustion, it may be necessary to curtail blogs somewhat for Monday and Tuesday.
Tomorrow we will look at one aspect of freight transport by rail, amongst other topics. There may be more news of services replacing those run by recently defunct companies.
Next Variety blog : Monday 8th August
Posted by fatbusbloke at 02:00