Une Très Bonne Idée
From today, all public transport in Luxembourg is free with the exception of First Class travel on trains. To put this in context, the whole nation has a poulation of something over 600,000 - about the size of greater Sheffield!

The politicians accept that the cost will fall on the taxpayer ... 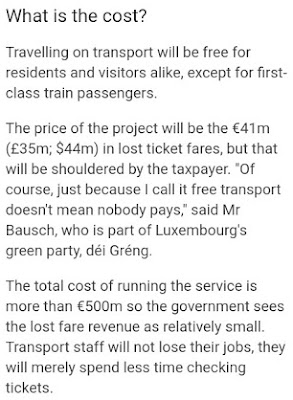 ... but the system is already heavily subsidised.

Car ownership in Luxembourg is the highest in Europe as per this diagram which shows cars owned per 1000 of the population. 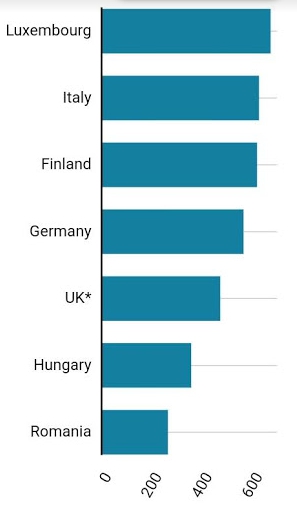 Another thought provoking statistic shows the percentage of GDP (all the lolly the nation earns) that each nation spends on its public transport. 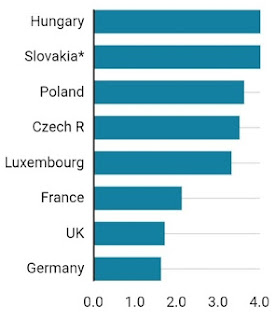 We are always ready to bleat about our fares being the "highest in Europe" (they aren't always!!) but from a taxpayer's point of view we get a very cheap deal indeed.

This would make it much more painful to, for example, make buses and trains free in Sheffield.

Maybe a brave government (when might we get one of those?) should have a go. We are anxious to reduce emissions and extend our "green" credibility, aren't we?

Well maybe we are if the Government (i.e. the taxpayer) doesn't have to foot the bill and we can bask in the political myth of "low" taxation!

Best Birthday Card?
Dangerous to assert, but the card from our Isle of Wight correspondent (who likes the epithet "senior") combined fbb's interest in public transport with another of his occasional enthusiasms - although the series which ends today has been, mostly, VERY disappointing - namely a certain Science Fiction series on the telly. 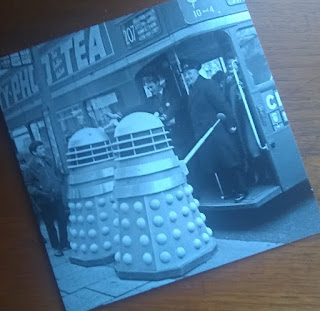 "Full right up, mate - but there's another one behind!"

Livery Delivery North East.
Bus 685 runs all the way from Newcastle upon Tyne to Carlisle and is operated jointly by Arriva and Stagecoach. 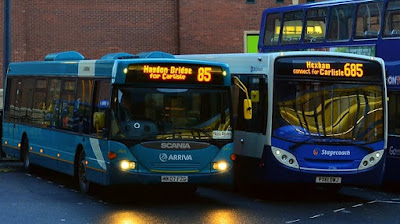 In more recent times it has been blessed with a dedicated livery applied to the vehicles of both operators. Here is Arriva ... 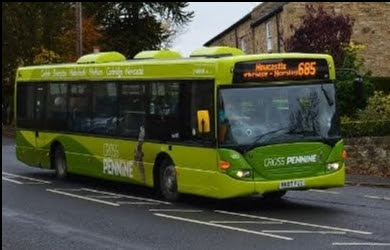 ... and here is Stagecoach. Spot the difference!

But a recent tweeter posted this picture of a "Cross Pennine" branded bus going to ... 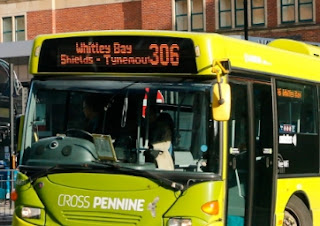 Unless fbb's geographical knowledge has detereorated at a similar rate to his knee joints, he is fairly certain that a trip on the 306 does NOT cross the Pennines. Not much point in branding your buses, Arriva, if you use and confuse by going in the wrong direction. It doesn't, as they say, create desire! 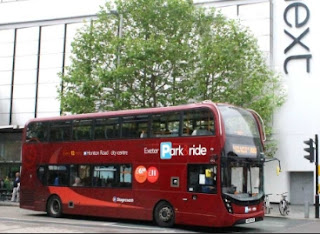 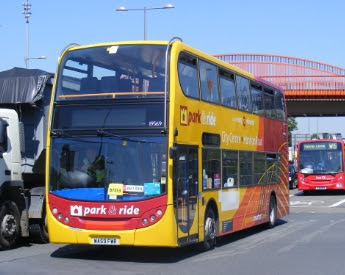 Then there is Matford in a tasteful BLUE ... 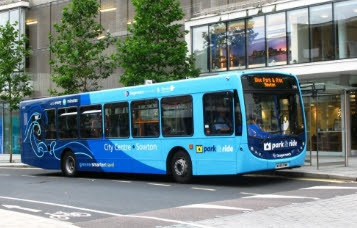 ... and Sowton which is GREEN. 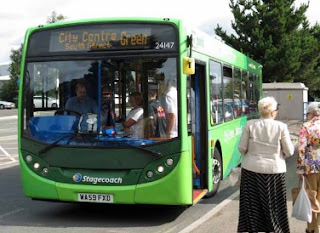 But when fbb was in Exeter on Tuesday last he saw two "green" Park & Rides; one was PINK ... 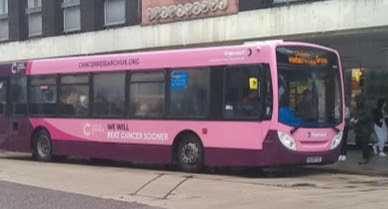 Not so much creating desire as creating confusion? 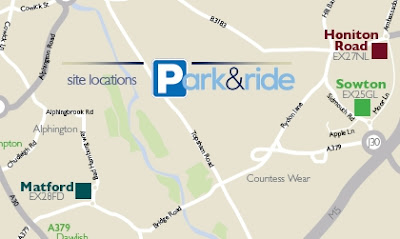 All three are in the hands of Stagecoach; but there is a fourth operating on Mondays to Fridays only from a well-hidden Digby site to the Royal Devon and Exeter Hospital. 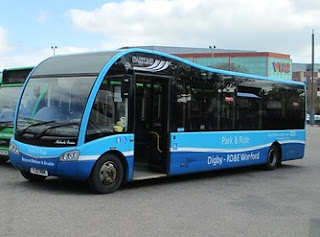 It is currently in the hands of independent Dartline.

This service also calls at the same Sowton site as the Stagecoach GREEN but, obviously, only runs to the Hospital. The buses are BLUE to avoid confusion with the Matford Park & Ride.

To help all and sundry understand, the Hospital service (which calls at Sowton P&R) starts from Digby P&R ... 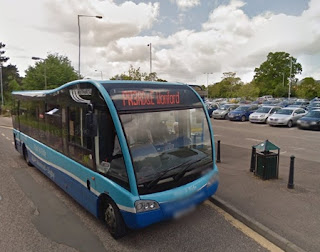 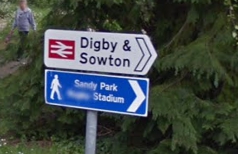 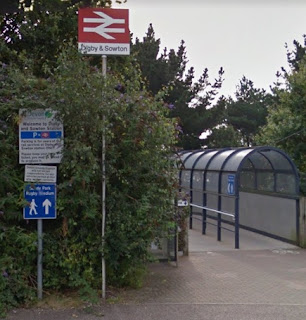 The two are very close. 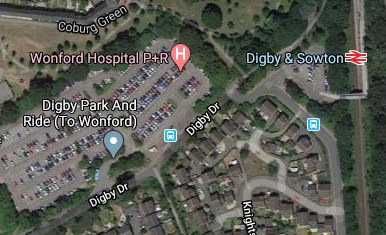 Exeter City (Stagecoach) buses call at the Park and Ride AND the station ...

Route H, of course (!) runs via the Hospital!

But, according to the map NOT route D! 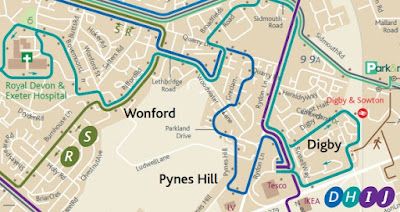 Except that route D is timetabled at the Park and Ride AND the Station.

Just to clarify matters, however, route I and J DO serve Digby but do NOT run via either the Park and Ride OR the station. They pass happily through the stops at Tesco, also served by D/H and H/D. 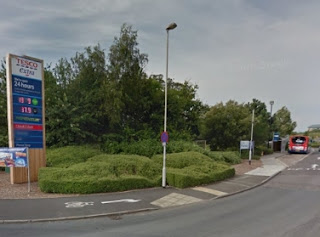 Maybe the older map is a tad more helpful but it is pre I/J? 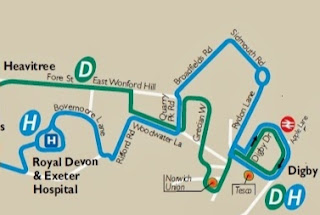 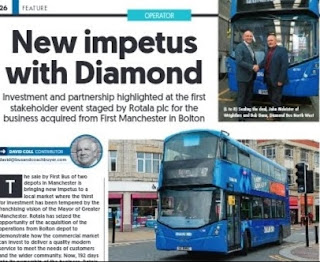 The order is for 163 new vehicles of which 128 Streetdecks will be for the Bolton business. 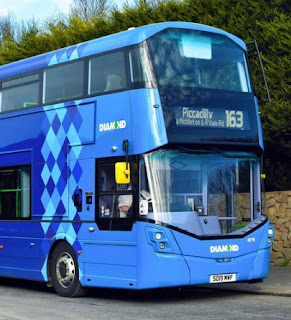 In view of the uncertainty of the future of commercial bus operation in Manchester, consequent upon Mayor Andy Burnham's decision to go for a London-style franchised system, this would seem a very courageous decision.

But Rotala are between a rock and a hard place.

As part of the take-over of First's business, they have only agreed to lease vehicles from the outgoing incumbent. Sooner or later they have to replace these.

The big buy is brave indeed, but probably necessary.

Let's hope for Rotala's good and Manchester's stability Diamond have got their sums right.

Nice to see, however, a launch accompanied by a preserved Bolton Corporation bus. 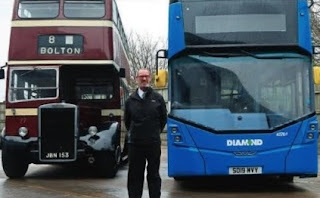 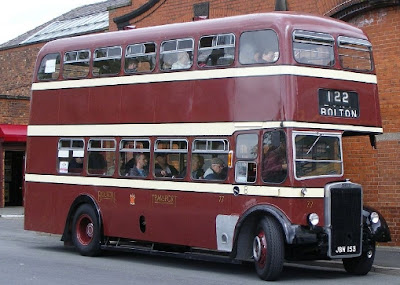