The following item was added to yesterday's blog at about 0930 and it repeated here for the benefit of our early morning readers (UK time).

First had previously announced that they were to dispose of First Bus and develop their business in America.

Yesterday's full announcement from the Board included this, on the vexed subject of First's UK Rail operations:-

We will continue to actively manage First Rail’s existing portfolio of rail franchises to deliver sustainable benefits for passengers, shareholders and our other stakeholders. We also look forward to the publication of the Williams review, which we hope will provide much anticipated clarity around the future shape of rail franchising.

Hardly a resounding endorsement of the Group's on-going future in the rail business, is it?

Back to the Gas, Man!

You might be forgiven for thinking that "Hydrogen Buses" burn hydrogen like a diesel bus burns diesel fuel but, alas, you would be wrong. Hydrogen buses are driven by electric motors, often with back-up batteries, and the gas is used to generate the electric.

It uses fuel cell technology. Which is (fairly?) easy to understand. 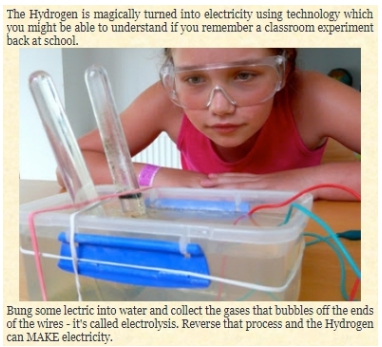 Not quite as simple as shown in the picture above but, nevertheless, that is the principle.

Two "experimental" batches of fuel cell buses have been operating for some time.

In Aberdeen, both Stagecoach and First have been operating swish-looking vehicles with the telltale bulge on the Hydrogen tanks on the roof ... 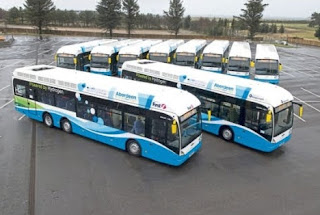 ... a modern version of the unsuccessful wartime gasbag buses. For example, during WW1, Edinburgh tried buses powered by ordinary town gas which filled to bag on the top deck. 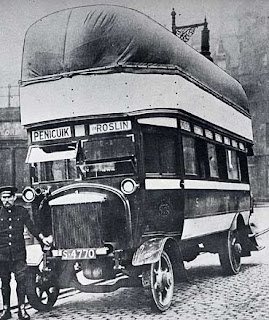 Other schemes used a miniature gas works fixed to the back of the bus and therefore needed no bag! 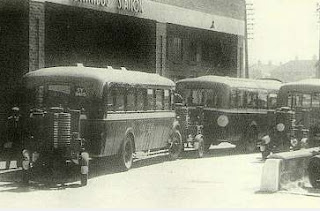 In both these gases the gas WAS the fuel, powering a conventional piston internal combustion engine - fuel cell technology was but a future dream!

In London, the prestious ground-breaking bus-of-the-future was deployed on the prestigious ground-braking bus route of the future, the RV1 from not-quite Covent Garden to not-quite the Tower of London. 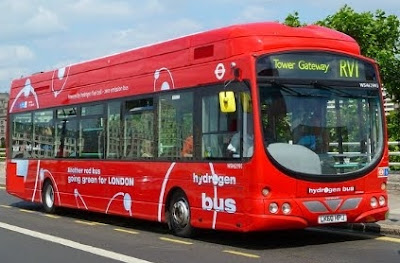 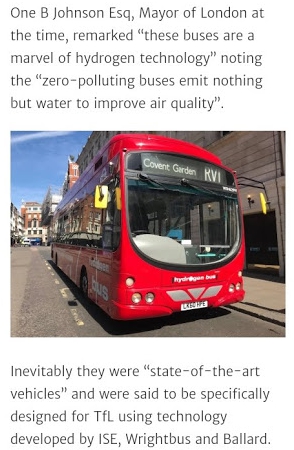 The RV1 died due to low passenger numbers. It was the slowest way to get from end to end and very few used it on the bits not covered by other, more frequent, services.

The buses moved to a bog-standard suburban bus route, the 444 (Turnpike Lane to Chingford) ... 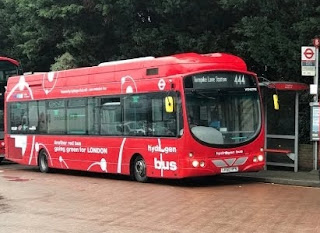 ... and a week back they were removed therefrom and replaced by double deckers. 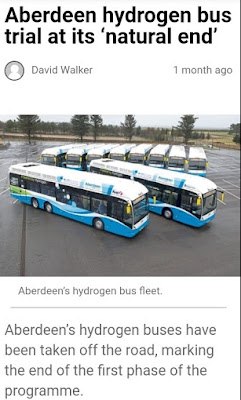 The "first phase" has ended.

And the second phase? Here are important people from Aberdeen standing under a huge bus shelter ... 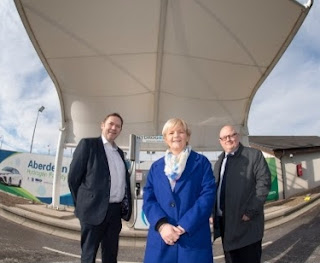 ... located at the City's real and genuine "gas station"! 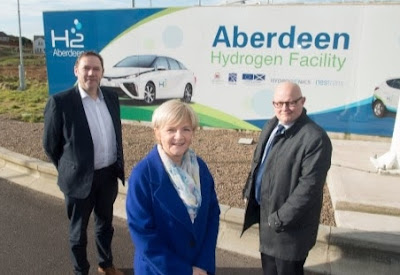 Their sojourn on an industrial estate in the Granite City was to announce that First bus will have double deck Hydrogen buses on the road "by the summer".

The implication is that these will be the first for the UK. 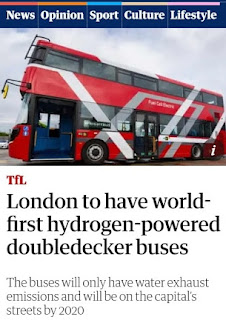 ... London seems to be making similar claims! The bus is a Wright Brothers pre-production model ... 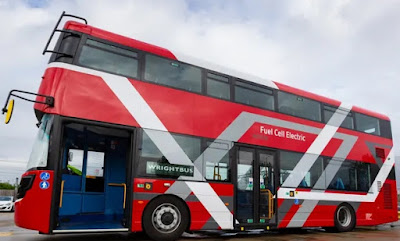 ... but clearly liveried for London. Its label does not refer to Hydrogen and there are no tanks on the roof. They are hidden at the back where the engine would be normally.

Fuel Cell Electric is probably a better bit of PR as hydrogen is highly explosive (but safe, we are assured) and the little old ladies of London might well be fearful of riding in a big red bomb!

But, yippee, the buses only waste product will be water, so full marks for the environment, air quality, the planet and Greta Thunberg.

Hydrogen production is the family of industrial methods for generating hydrogen. As of 2018, the majority of hydrogen (∼95%) is produced from fossil fuels by steam reforming of natural gas, partial oxidation of methane and coal gasification.

In other words a larger and more sophisticated version of those wartime "producer gas" machine at the back of buses. 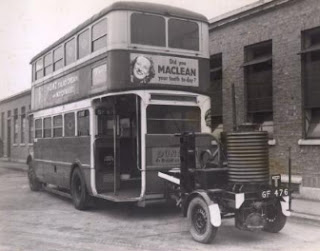 Town Gas and Producer Gas have a high percentage of Hydrogen in their mix of inflammable substances. North Sea Gas has a higher proportion of Methane.

Why have both these "state of the art" batches of single deck buses been withdrawn? Maybe the state was not quite as arty as its proponents proposed?

Currently, there is still plenty of pollution with hydrogen; boiling up of scarce fossil fuels etc. etc. to make the stuff.

Will the "new breed" of double decks fare any better?