Two problems need to be addressed. There aren't enough passengers and there aren't enough drivers. Hence, sensibly, services need to be reduced or bus companies will become insolvent; that is until Boris and his chums come up with support for "essential services" to get people to work, doctors, hospitals etc.

Yesterday we saw examples of reductions of rail services and the more dramatic reduction for National Express which, fbb is reminded, is closely akin the their Christmas Day network.

On the buses, the general policy is to operate Saturday service in Monday to Friday with extra early morning trips for shift workers where needed. "Senior" passes are being accepted all day with no time restrictions - most areas.

Message on the Stagecoach Midlands twitter pages on Sunday afternoon.

"We are pleased to say that all local authorities in the Midlands area (except Northamptonshire & Milton Keynes) have agreed to temporarily allow concessionary travel cards to be used at any time of the day."

Scrooge is still alive and well in the hallowed portals of our caring County Councils.

It seems highly likely that the modest drop from Monday to Friday to a Saturday frequency will be hopelessly inadequate to "balance the books". fbb guesses that Sunday frequencies will be the next step, possibly extended to start earlier.

For fbb, involved as he is in the GoTimetable Sheffield app, it is easy to review operations in Sheffield and nearby. Other large communities will be similar.

It is in circumstances like this that the overview remit of the PTE should be of immense help.

By yesterday morning there was a full list of changes with MOST being linked to temporary Saturday timetables.

Occasionally the timetable layout is a bit dodgy ... 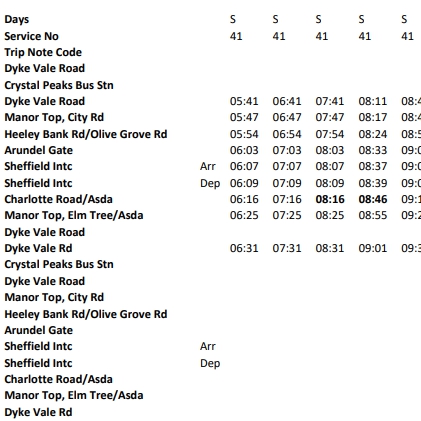 ... thanks to the efficiency of modern technology! But not a bad effort.

It is, however, possible to show the timetable sensibly ...

... but it does need the technology supplied by the human brain.

The advantage of going for Saturday times (or even Sunday ditto if necessary) is that information displayed at stops and available from journey planners will still be "correct" if users remember that it is always Saturday for six days a week.

But in Sheffield, First Bus have taken the opportunity to trim some services to a worse frequency than Saturday. These are thus not right at bus stops and this will take time to change.

Route 6 to the hinterland of Darnall ... 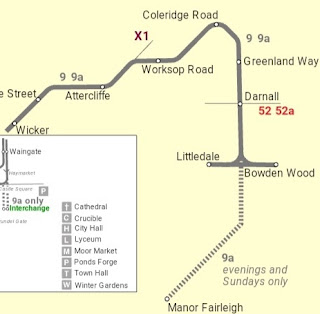 ... was an unhelpful and confusing every 35 minutes (approximately?) Monday to Saturday. It now becomes every 65 minutes approximately. Awful frequencies; and it is no wonder passenger loadings are so poor.

Some cross-city services are also cut to below Saturday normality.

Services to Kiveton Park and Dinnington have been slaughtered. 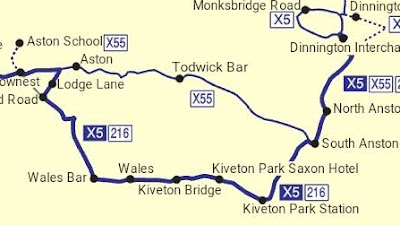 ... is withdrawn, leaving the traditional X5 which is reduced from every 20 to every 30. More drastic than even that, the associated hourly X54 via Todwick and Kiveton Park... 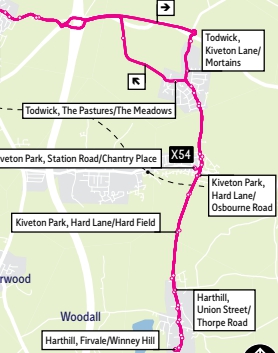 ... is also withdrawn completely, except on Sundays when T M Travel will still run an hourly tendered service! 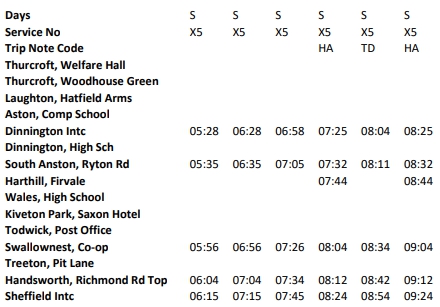 ... only mentions Todwick as a column heading note (TD) and First's efforts are equally weak. 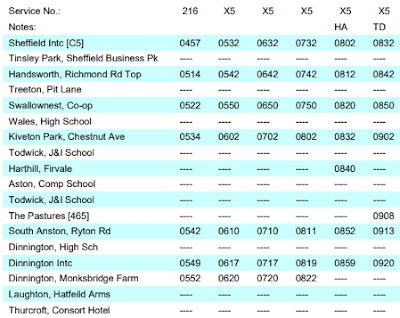 Here Todwick is just "The Pastures" - OK for regulars but a complete mystery for many.

It would be churlish to expect schedulers to create totally new timetables at short notice without some limitations and discrepancies - perhaps better versions will appear in due course.

Even printed copies? Probably not - it is, after all, all on line.

But, in Sheffield, the champions of "Slash and Burn" have to be T M Travel. 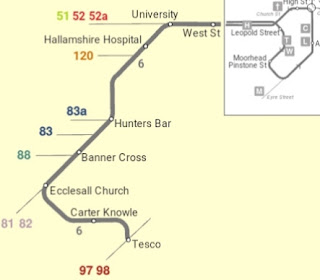 That is somewhat alarming, but less so when you see what T M Travel have done with the 218 to Bakewell. On Mondays to Saturdays this normally runs every 30 minutes and from Sunday next would be upped to every 30 on Sundays. 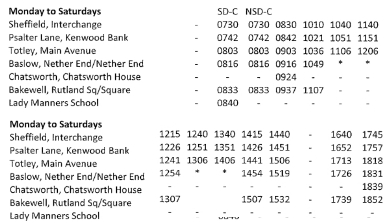 One tweeter mused that some operators were cynically saving money on services that have always been loss-making. Another suggested that First in Sheffield would not return to previous frequencies even after we return to normal ... 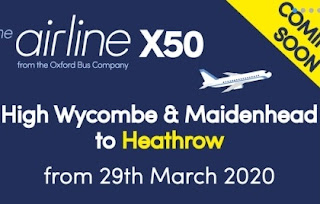 ... will NOT now start as advertised. Likewise, Hulley's innvative leisure services from Sheffield and Chesterfield to Monyash and beyond ...

SERVICE SUSPENDEND DUE TO COVID-19

... also suspended is the recently introduced fast hourly service between Chesterfield and Bakewell.

Clearly this blog would become tedious in the extreme if it listed the growing number of "Virus" changes; so today will be the last "Virus" blog for the time being. If anything really newsworthy materialises, fbb with return to the topic.

So tomorrow we revert to happier things with a review of some excellent publicity centred on Bedford and Luton.

Meanwhile, fbb has had to abandon his regular visits to the pub for Double Diamond and Dominoes ... 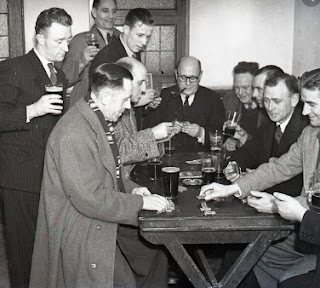 ... the whippet club had been shut down and the weekly jog to Lyme Regis has to be put aside.

But there will still be blogs to write and there is a model railway to rebuild and a God who is good to those who serve him, despite the mess that people, corporately, make of His world.

Habakkuk asked the right questions and, even in about 600 BC, he didn't like God's answer either.

Next GP blog : Tuesday 24th March
Posted by fatbusbloke at 02:00