The Ravages Of Roadworks Re-routeings (3)

Secrecy Must Be Maintained

A Sheffield correspondent Andrew (there is quite a few of them) points out that road closure and bus route diversion information is not just poor at Fulwood. He lives at Bradway where the steep Twentywell Lane is closed for a week. 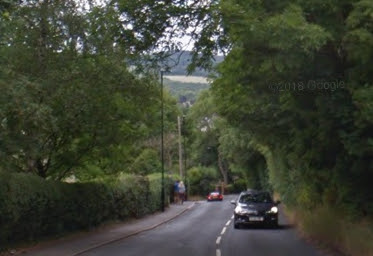 This affects route M17 running from Jordanthorpe to Dore. It is a sort of portmanteau route, a hark-back to the days when the PTE sought to provide everybody in the city with a bus service. Hence the proliferation of "Nippers". 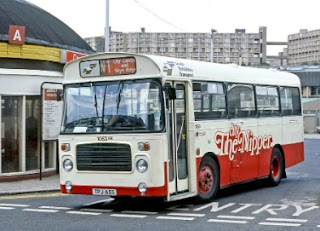 The M17 goes via Greenhill Village ... 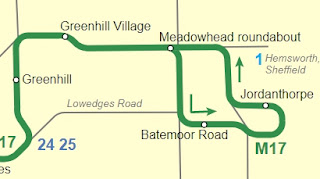 ... which lost its big bus route (59) long ago with various re-organisations of buses to Bradway. It also wiggles via steep roads at Bradway Bank ... 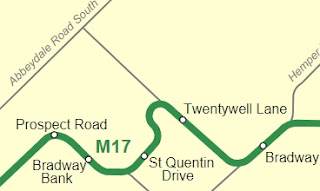 ... then serves the hinterland of Totley Rise ... 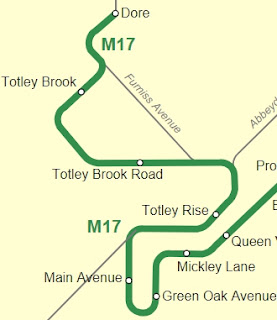 ... before providing a link between the shop-less Totley Brook development and suitable retail establishments at Dore. It offers an hourly service finishing earlier on Saturdays. 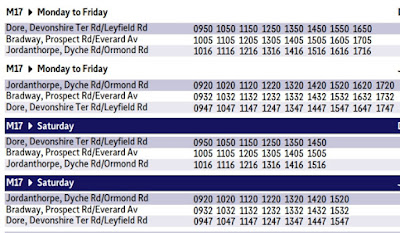 Hulleys of Baslow is the operator on tender to the PTE. 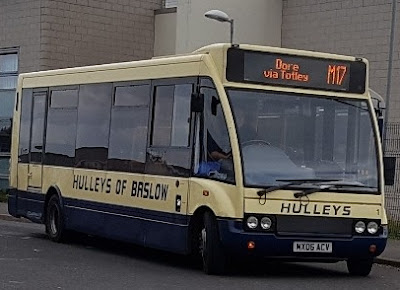 Clearly the M17 needs to be diverted but nowhere on-line or off-line is there any information at all!

No one really thought this through, did they?

fbb took a ride on the M17 all the way a year or so back. It was diverted, this time away from Bradway Bank (the most interesting bit with steep hills and tight wiggles), again without any infromation.

Perhaps the good folk at PTE Towers don't know it exists? They ought to, they publish the above timetable but that is done "sustainably" by their deep throat computer, so maybe no real person ever sees it?

The Best Laid Plans?
Also from Andrew is a report on a road closure and diversion in Derbyshire but not far from his pad at Bradway.

A section of road between the delightful village of Holmesfield and the former village of Dronfield Woodhouse is closed. 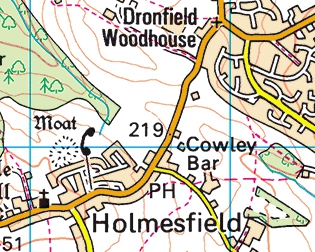 Holmesfield was once served by buses from Sheffield (but no longer) ... 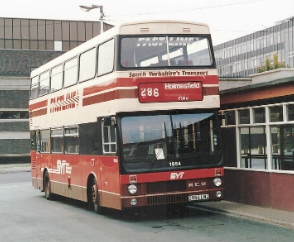 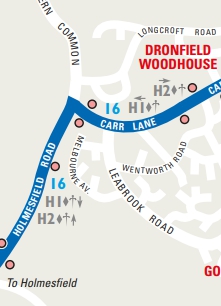 The diversion for cars etc is lengthy and shown below in BLUE, with the 16 (operated these days by T M Travel) bus' normal route in RED. 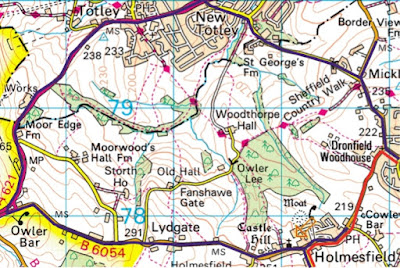 Cars driving to Sheffield would zip up to Owler Bar and take the A621 to city; but drivers wishing to access the southern areas of Sheffield (Bradway etc.) and Dronfield would have a very long diversion indeed. As would the 16 bus. To be kind the the bus and its potential passengers, a shorter diversion was arranged via Cowley.

The road is quite thin! Now, a question: if you were a motorist and if you wanted to get from Holmesfield to Dronfield or vice versa would you ...

We can guess the answer and Andrew sends some pictures of the consequences. 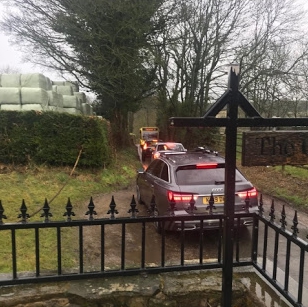 And there's another bus behind you! 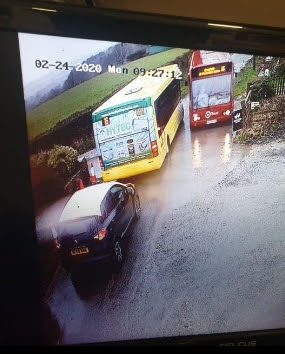 Even without the cars there isn't really room for two buses to pass. 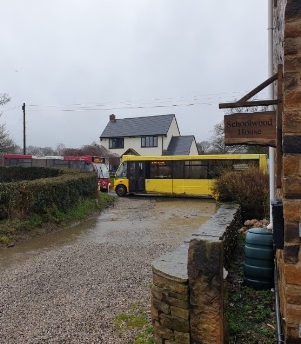 Summoned to the area by local residents and irate motorists, Derbyshire Council rode in White Knight style and moved the "Road Closed" signs closer to Holmesfield.

No doubt this did not fool the motorists!

Dang-Nappit It's They Computers Again!
Yesterday the Fulwood shuttle bus (route 120S) which had been showing Not in Service ... 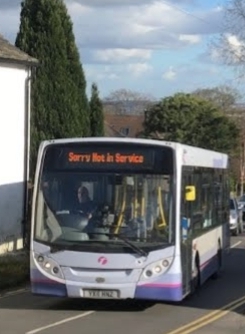 ... had been sorted out by the simple expedient of switching the blind display off completely. It showed BLANK. 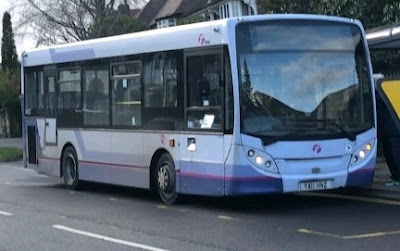 Apparently the system for programing First Bus blinds in Sheffield is different from that in operation in darkest and remotest Doncaster, where the bus normally lives. No one at Sheffield could ackle it, as we say when sinking in to the vernacular.

fbb is informed that a passing seven year old was invited into Olive Grove depot on Tuesday evening and proper destinations are now being shown.

Like "Nether Green" which is definitely isn't and never has been! 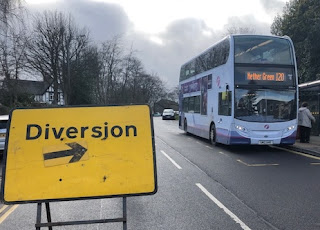 Apparently the shuttle bus has not been able to use Stumperlowe Hall Road ... 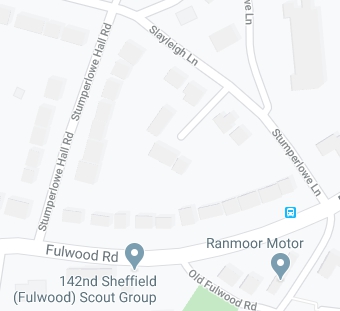 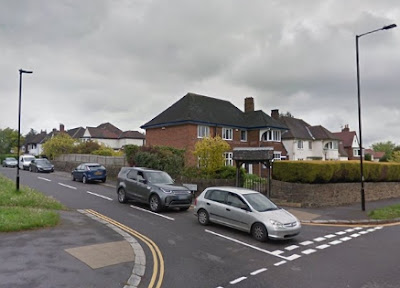 Where is Blakey when you need him? 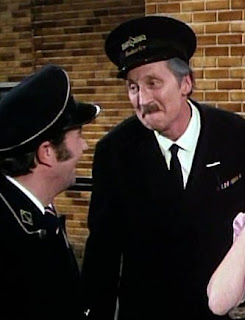 And finally on this topic. Bus enthusiasts love operating oddities so here is one - sort of. During the day, Mondays to Saturdays, First Bus 120 runs from Ctystal Peaks to Upper Fulwood ...

... and Stagecoach 120 runs from Halfway but only as far as Ranmoor. But in the evenings and all day Sunday the full length route from Halfway to Upper Fulwood has alternate First and Stagecoach journeys.

So there are a few Stagecoach (SSY) journeys as the evening service develops that need the First Bus shuttle. 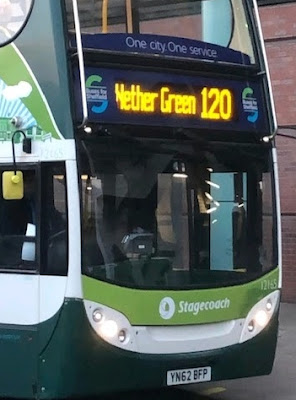 The above will do just that. Like First Bus, it shows the incorrect "Nether Green" ... ... but provides some esoteric excitement for the keen omnibologist!

No one can explain why the lad that has (we hope) successfully got the shuttle blind working could not have persuaded the screens on the big buses to show:-