Hindsight Is A Wonderful Thing

It seems almost certain that public transport will be severely affected by the current health crisis. We have already heard of severe cutbacks in air services but, today, one of the first hints at future strategy has appeared courtesy of First in Bristol etc. 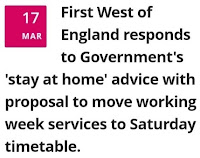 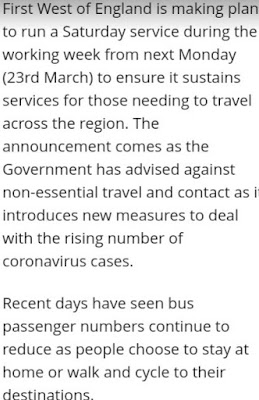 So, from Monday next it will be Saturday services throughout the "West of England" operating area, a reduction in 10% of the number of buses on the road.

First has issued a general notice which also warns of timetable changes.

Service Updates
In the event that we have to make short notice changes as this situation evolves, updated timetables will be published on our website in the first instance. We’ll do all we can to keep providing you with the service you expect. It may become difficult to keep real time information and service changes updated in our app so please refer to our website www.firstgroup.com/coronavirus for the latest updates.

We can be sure that other operators will be considering similar reductions and if, as seems likely, the crisis deepens, more cuts will be made over the next few weeks / months.

Meanwhile in the Republic Of Ireland ... 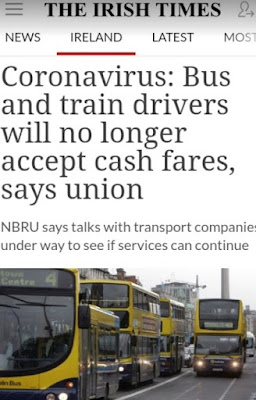 But happily and positively from Warrington:- 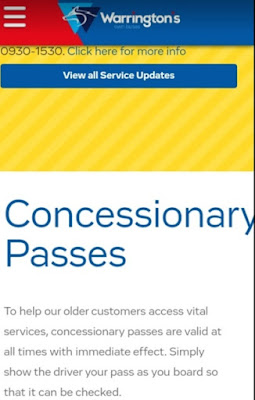 Back In Time To 2013
In these days of email and social media the only surprise items dropping through that mysterious flap in the front door ...

... are usually advertorial circulars. Most post is expected (deliveries from on-line purchases) or Birthday cards!

So it was, indeed, a pleasant surprise to hear a significant package clunk on to the hallway floor at fbb mansions. It was from occasional correspondent and blog reader Julian. 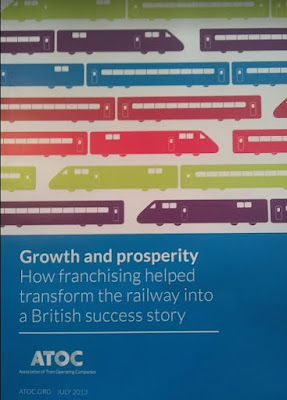 The booklet is dated July 2013

The introduction is penned by none other than Tim O'Toole, then chairman of First Group. 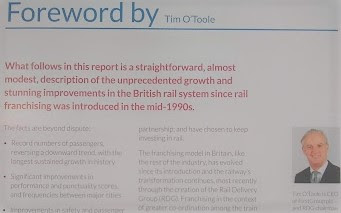 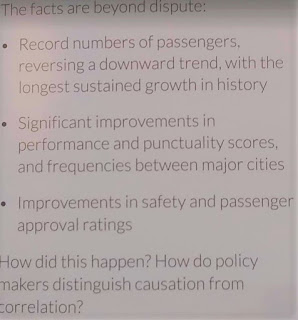 Certainly the number of passengers has grown beyond anything that even the most enthusiastic supporters of the industry could have ever hoped. The facts are beyond dispute.

But is the growth due to the franchising system or despite it? We are still waiting for the publication of "The Williams Review".

The Williams Rail Review was established in September 2018 to look at the structure of the whole rail industry and the way passenger rail services are delivered. The review will make recommendations for reform that prioritise passengers’ and taxpayers’ interests.

The review’s findings and recommendations will be published in a government white paper in autumn 2019. Reform will begin in 2020.

It is led by independent chair, Keith Williams. Keith is deputy chairman of the John Lewis Partnership and former chief executive of British Airways. Keith is supported by a panel of experts from across the country with expertise in rail, freight, business and passenger interests.

Publication was delayed in the Autumn of 2019 "because of the General Election" and not a single sheet of computer page has appeared since. Rumours abound that it is just too controversial for the Government and particularly The Treasury to contemplate. 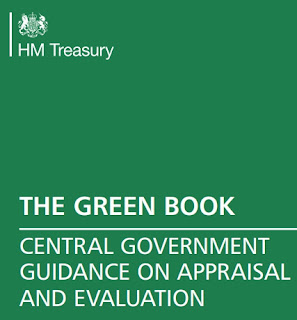 ... which sounds like a way of kicking the problem int the long (green?) grass. Whatever, during the present crisis HMG has other things to think about. But the "huge success" of franchising seems a lot further off than 2013. 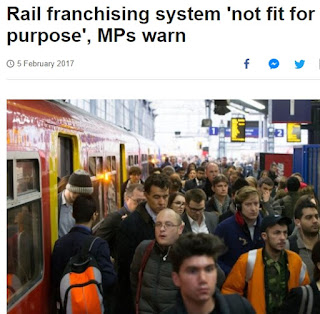 But was it all going splendidly seven years ago?

fbb does not know what provoked the issue of the glossy bit of self-congratulation, but he guesses it was a response to the beginnings of the "anti-franchise" movement.

The booklet would appear to concentrate on the former "InterCity" routes ... 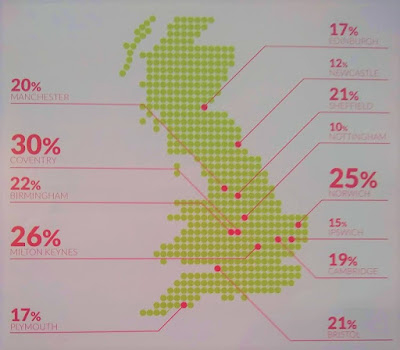 The above graphic shows significant passenger growth for the places it shows but there is no Southampton., no Hull, and even no Glasgow. Of the more rural areas (rural as in Carlisle, Liverpool, Brighton and Sheffield!) there is no mention.

When fbb "did" economics at Northampton Grammar School, a modest 60 years ago, he was taught something of the techniques used in presenting statistics graphically. Manipulate the scale of the drawings to make your "conclusion" seem the more dramatic. 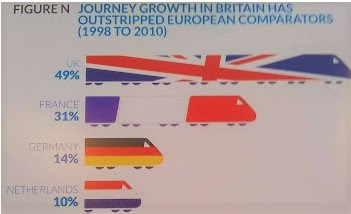 And, if it suits your point, use percentages rather than actual totals. That way the UK train will appear to be way out in front.

Be somewhat evasive as to what units you are using. 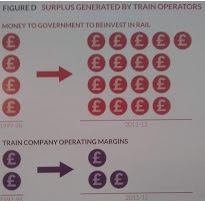 Lots of lovely blobs, but what do they really mean?

Here the 1.4 billion blob is very much bigger than the 81 million blob even to the point of using the word "billion" which actually sounds bigger than it is. 1.4 billion is 140 million which is still an impressive increase but it doesn't sound so good or look so good graphically.

Some of the conclusions are equally suspect. 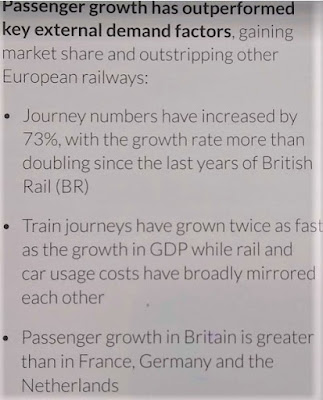 But, let us accept that ATOC (now the Rail Delivery Group) has not lied - perhaps massaged the truth just a teensy bit, but not told any outright lies.

Then what has happened to thus hugely successful franchise system in the seven years since this glossy appeared.

How are the franchisees performing (from north to south).

West Coast and High Speed 2 (First) - too early to tell

South Western Railway (First etc) - possibly due to be re-nationalised

South Eastern - on a management contract**

Transport for Wales - (Keolis) - too early to tell?

"Management Contract" - the government takes the risk and pays the operator a fixed fee for running the franchise - nearly nationalisation but not quite!

Overall a sad decline since the "huge success" of franchising way, way back in 2013.

Next Princess blog : Thursday 19th March
Posted by fatbusbloke at 02:00