The Ravages Of Roadworks Re-routeings (1)

The map of the arrangements near fbb's former pad at Fulwood in Sheffield, as published in a previous blog and in operation from 0700 to 1900 from yesterday (Monday 2nd March), was a bit wrong. 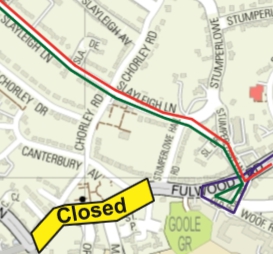 In fact the arrangements at "Nether Green" (which isn't Nether Green) had been resolved after some discussions between all parties. 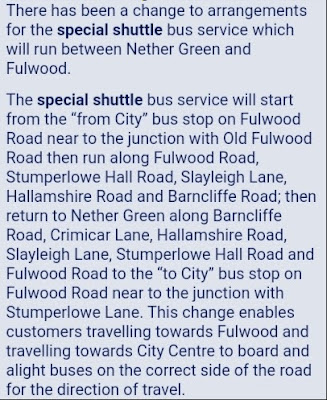 Whatever the arrangements were, are, or should be, fbb misunderstood. So the correct map is herewith:- 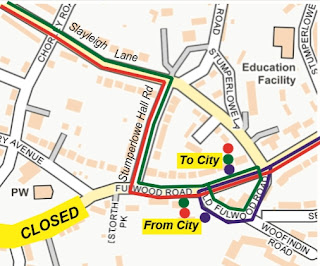 Except that it wasn't - quite. Correspondent Matthew photographed the shuttle bus at 1030 yesterday morning. It arrived showing an unhelpful destination! 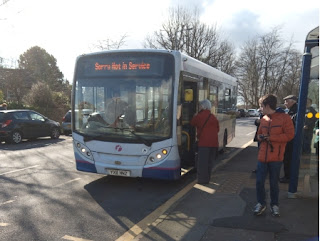 This is at the "to city" stop, see map above.

At 1515 it was confirmed that " Sorry Not in Service " was being shown all round the shuttle route.

Here is the bus turning via Old Fulwood Road. 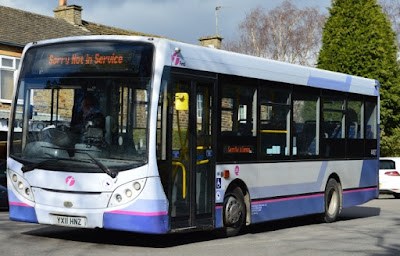 At this point, having dropped its "to city" passengers it is turning to pick up at the "from city" stop (see map above) ... 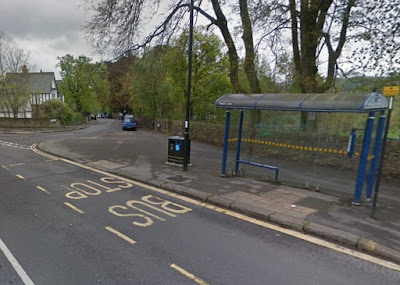 ... so for a few brief yards it really IS "not in Service"! Old Fulwood Road is tree-lined, Fulwood Road (the normal bus route) passes out of shot to the left.

Before retreating to Doncaster, the bus gained familiarity in Sheffield on the "FreeBee" city centre service - a sort of poor man's City Clipper - provided, obviously, free of charge. 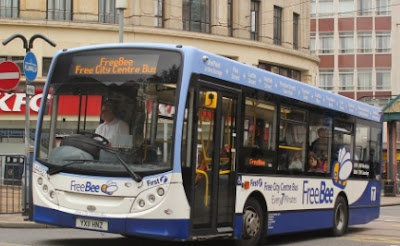 Road Closure? What Road Closure?
At about the same time, correspondent John, who campaigned vigorously for buses "up the hill" rather than a total abandonment of Upper Fulwood, walked the route to observe work on the closed road, Brookhouse Hill (See maps).

There was none! No cones. No equipment. Not even a solitary man with a shovel! 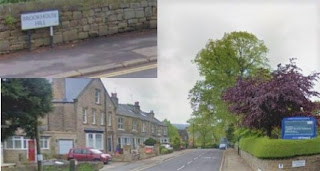 Here is correspondent David's snap taken as he drove his car down the closed road .... 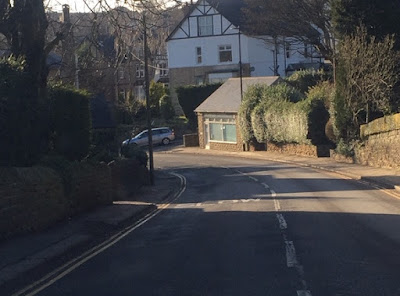 ... and a car turning left out of the bottom of Crimicar Lane about to ascend the closed Brookhouse Hill. 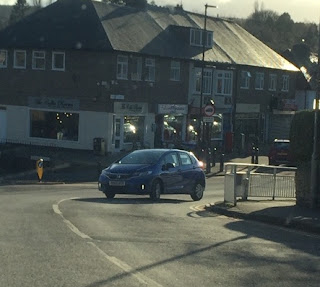 The rumour amongst various locals, bus drivers, bus photographers and the man from Amey's who was charged with putting up the "Road Closed" signs ... 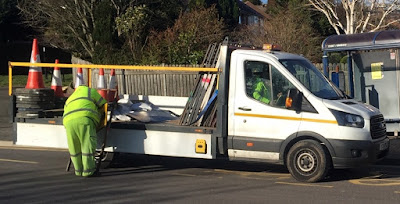 Stagecoach Stays Silent
And there was another problem.

Both First Bus and the PTE had extensive verbiage - but no maps - on their respective web sites, and notices had been posted at stops on the diversion. 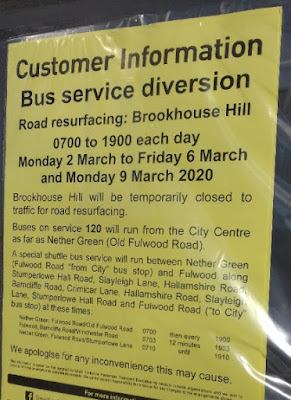 But this helpful panel made no mention of Stagecoach 83a which similarly could not get where it would normally want to! "X" marks yesterday's non-closed closure 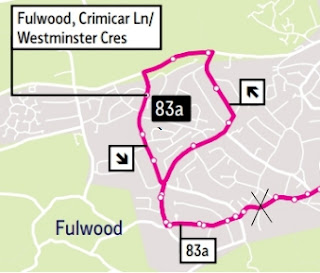 fbb awaits observations as to when and where Stagecoach diversion notices may appear. 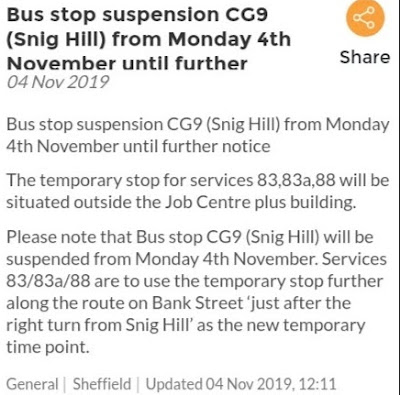 Which may (or may not) still apply. There is no mention of this temporary stop on the PTE's collection of wise words!

There were a couple of other bits of news ... 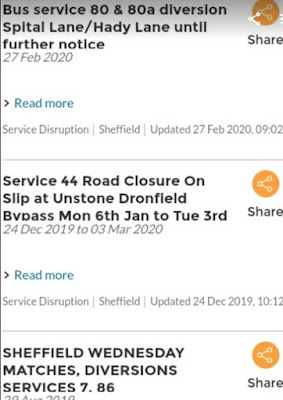 ... affecting Chesterfield and Unstone. But zilch about the 83a. It was definitely running via the Slayleigh Lane diverted route all day yesterday.

Of the participants in this shambles, nobody comes out smelling of roses. The chances are that a combination of poor publicity, 12 minute shuttle "connecting" (ha ha) with a 10 minute 120 to city, and no buses on the lower part of Crimicar Land or Brooklands Avenue will drive a good few more Fulwood residents away from the bus and into one of their many cars.

Observers yesterday reported that passenger numbers on all services were "unusually low".

It is a right mess! But maybe it will settle down.

And Unbelievably ...
The Council Committee that ensures that roadworks are as disruptive as possible have done a great job. There is a traffic light controlled single lane section on the already "tight" diversion via Slayleigh Lane, photographed by correspondent Roy. 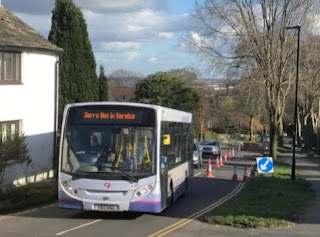 And it's near the narrow bit!


Next Roadworks blog : Wednesday 4th March
Posted by fatbusbloke at 02:00