It will probably be impossible to follow all that this microscopic blob of stuff is causing to all aspects of our normal daily round. The virus is very very small** (yellow blobs - artificially coloured) seen here attacking human cells. 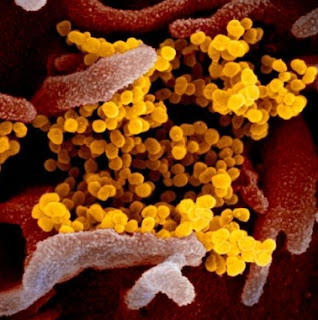 The little nasties are so tiny that they will pass easily through fabric masks! Hence the need for washing which, we are told, removes some of thee "glue" which enables them to stick to us!

This blog aims to keep track of the Public Transport Experience. But it will fail - too much is happening - or should that read too much ISN'T happening!

One of the smaller bus companies with which fbb has a passing contact has seen its revenue drop by 50%.

Clearly such a decline is unbearable. Whilst the daily Boris Roadshow has made a huge raft of "provisions", nothing is going to happen fast enough for the people at the sharp end. Clearly it would be silly to run lots of empty buses if large numbers of their customers are working from home, or staying in evenings and weekends even if they are not totally "at risk" or totally self isolating.

The legal verbiage from Traffic Commissioners my be in response to their "statutory duties" but it is both unnecessary and unhelpful.

Whilst fat over 70s with slightly high blood pressure MIGHT be "at risk" there are plenty of younger men and women who ought to be kept away from normality for their own good.

So less people are travelling by bus or train and less staff are available because thy are self-isolating.

Now is simply NOT the time to launch a new much increased bus network in Cornwall.

But launched it is - at last. 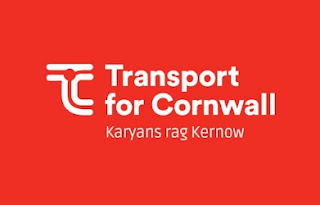 It all appeared on Friday with just over a week to go. Timetables are "being printed". Twits are twittering ... 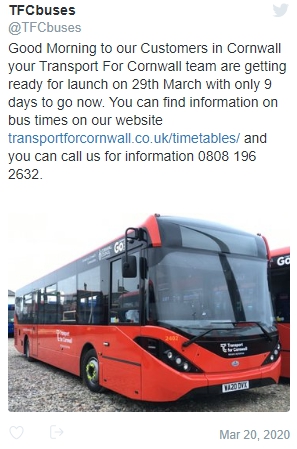 ... and there will be quite a few "wrong" branded buses on the road from day 1. 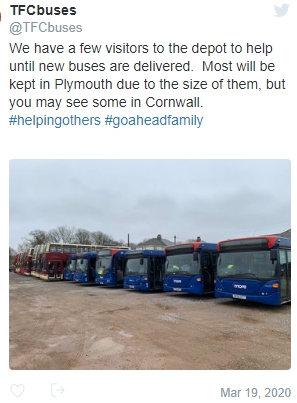 Timetables are a mixture of tendered bits that should be shown WITH First's network and not separately, as here with bits of 24. 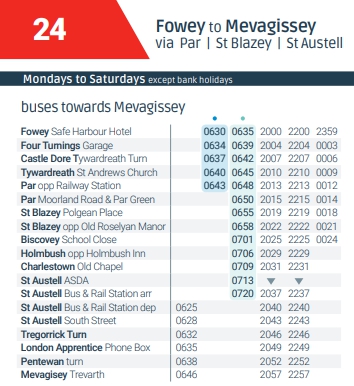 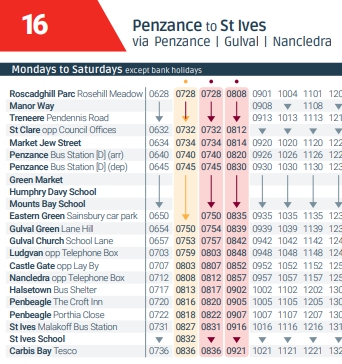 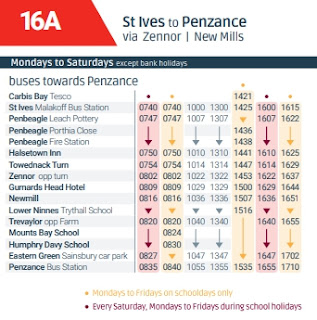 In the case of the 16/16A services have improved. 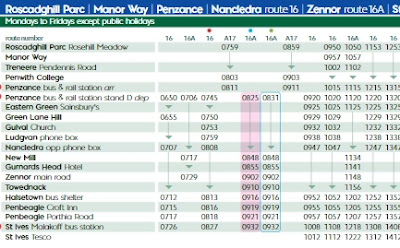 Then there are brand new services, replacements for links that have been lost in former years - e.g. every two hours Monday to Saturday across Bodmin Moor ...

... allowing time to enjoy a pie and a pint at the celebrated Jamaica Inn. 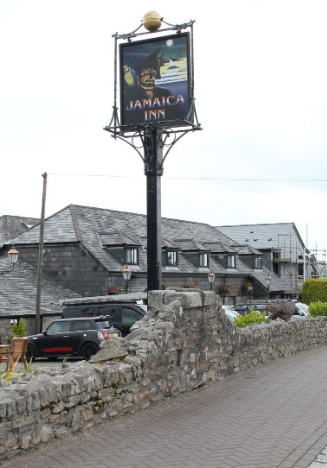 Something of the timetable's simplicity, and thus its attractiveness to the potential passenger, is lost in the cumbersome "we must show everything on one table to confuse people" approach of Transport for Cornwall. 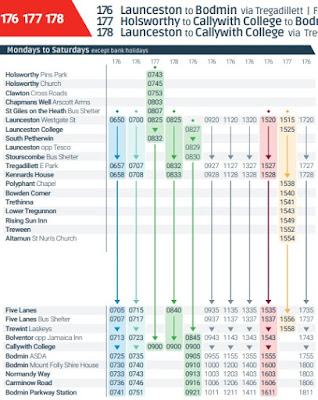 Take out the college 177 and 178 "clutter" and the table would fit on one page and not have to be stretched over two with long stringy things.

But the big beef, as expected, is that we now have a massively disjointed mis-alliance of two distinct networks "and ne'er the twain shall meet".

Twain derives from the Old English twegen, meaning two. The phrase ne'er the twain shall meet was used by Rudyard Kipling, in his Barrack-room ballads, 1892:

"Oh, West Is First (well nearly), but East is Best (and GoAhead), and ne'er the twain shall meet."

It is such a tragedy that the politicians of Cornwall have failed to integrate their grand plan with First's commercial network.

Or did First refuse to cooperate?

And we still know nothing about fares.

One week to go. 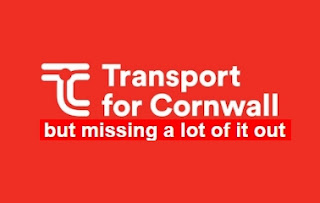 Rail Responds : Radical Reduction
Just one example of what we can expect in the next few weeks (few days?). This from Arriva Cross Country.

We will be keeping our services running for key workers and for essential travel, however from Monday 23 March, we will be running a reduced service. For more information, please click the link below.

We are now accepting tickets for our services two days prior and two days after the date shown on your ticket, at any time of day, until further notice.

The map explains the broad picture. 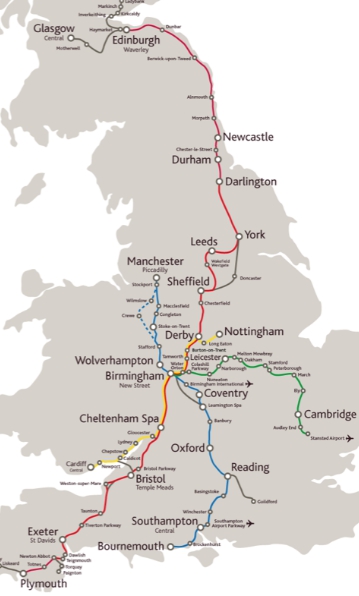 Nothing west of Plymouth, nothing north or west from Edinburgh and a basic hourly frequemcy on each of the coloured routes.

From Monday 23 March, until further notice, CrossCountry train services will continue to operate services throughout the day but at a reduced frequency and will not be serving stations west of Plymouth or beyond Edinburgh to Glasgow, Dundee or Aberdeen. An hourly train service will be operating on the following routes:

Some last trains may be earlier than normal and we do advise you check your journey before you travel using National Rail Enquiries or view our timetables below:

Looks like a near 50% reduction in the Cross Country network. The web site does give timetables which is comforting. Here is a typical cycle from south to Birmingham ... 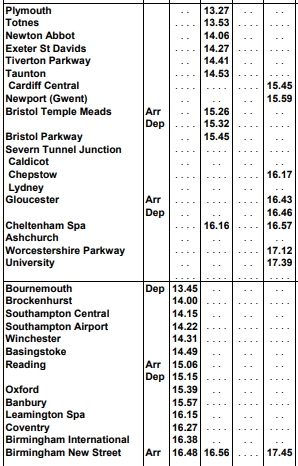 ... and from Birmingham northwards. 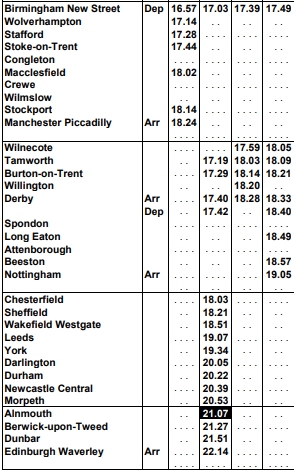 National Express - Massive Reduction
From Tuesday the network is greatly reduced, and greatly is the word. A set of services numbered in the 800s is on offer, some simple reductions as here with a 50% cut between London and Brighton. (click on the tables for an enlargement.)

Others are a strange mixture of normal services brought together in an attempt to provide something usable from the former network.

Of course, as with long distance train companies, many customers will have booked on coaches which no longer exist. Let's hope folk have the sense to make contact before they set out!

Tomorrow we take a selective look at the bus industry, knowing that the situation will be constantly changing.

Next Virus blog : Monday 23rd March
Posted by fatbusbloke at 02:00