With advancing years and nearly 2,900 blogs to his name (today's is No 2884), your aged author can, perhaps, be forgiven for forgetting some of the stuff he has written in the past. In April 2017 two blogs reviewed the snail-like progress of Sheffield's tram-train project.

New readers may care to read these brilliant (and modest) pieces of bloggersphere history ...

... long-term readers may remember them better than fbb did!

There was, on Thursday last,  a VIP passenger jolly to inaugurate the service ... 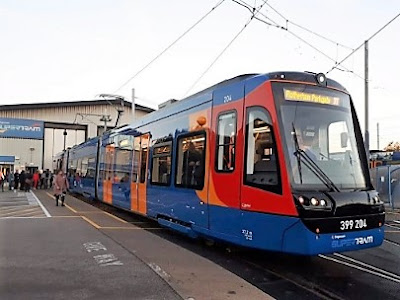 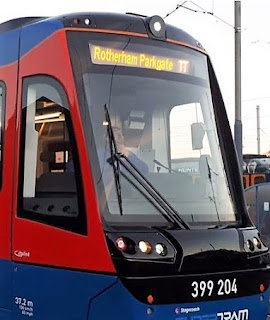 ... was the one involved in Thursday's prang. 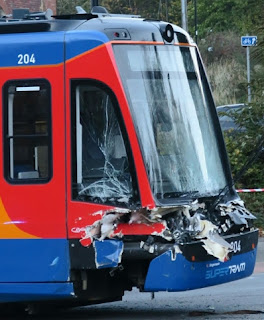 Is this a gloomy omen for the future of the Tram Train concept in the UK?

And why number 399 204? Ah - that's because of the national rail computer systems. 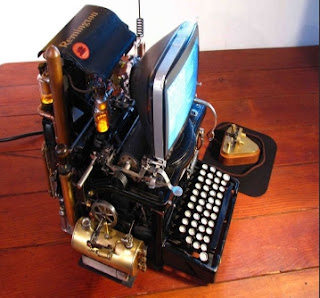 Because it runs for a whole mile on tracks used by real trains, it has to have a "real train" six figure number. No one seems to know why as it isn't part of the national rail stock and network rail has nothing to do with looking after it.

If they tried to input something like "tram204" the whole system would react badly. 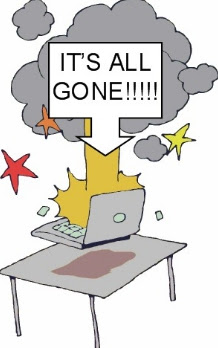 Deutscher Doppeldeckerbus
When fbb was in his teenage years, he was told by a parent eager to inform and educate that only the UK had double deck buses. Once over the Channel (English Channel, of course!) all buses were single deck.

When the spotty youth passed this nugget of information on to his transport enthusiast chums he was roundly ridiculed. "They have then in Germany", he was told firmly.

And, indeed, Berlin has had double deckers for years, and, in the past, very odd looking ones to British tastes ... 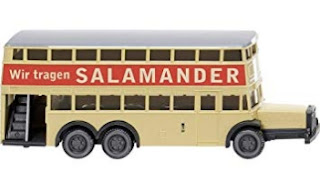 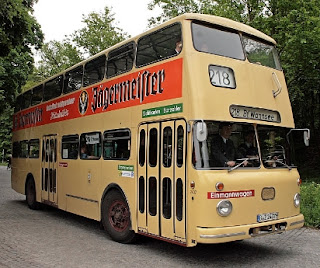 ... appearing squashed as if by some giant German Nashorn.

On a brief visit to Berlin a few years ago, fbb, Mrs fbb and No 3 son enjoyed a ride on the celebrated Berlin Route 100 ... 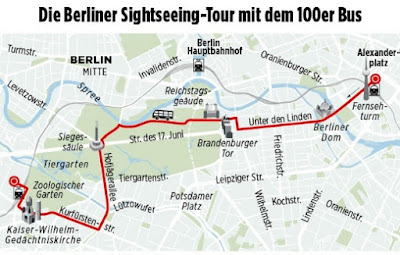 ... from Zoo, via the Brandenburg Gate and along Unter den Linden (street name meaning "under the lime trees"), the latter, of course, being in the former East Berlin. The route passes many sights for seeing, but as it was raining and because the top deck windows misted up, the trip was a bit of a Schlappmacher. But the buses were (and still are) double deck. 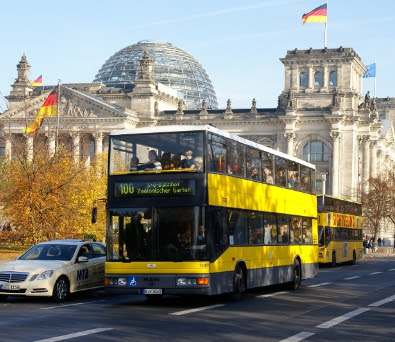 Recent news confirms that the latest batch of double deckers for Berlin is being built by ADL Ltd in the UK. 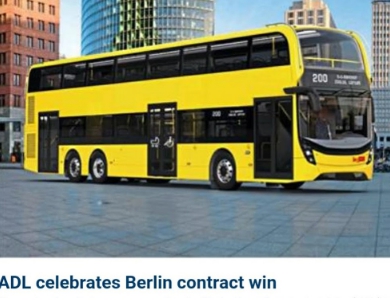 ADL is possibly better known by its older and less trendy name of Alexander Dennis Ltd. Blog readers will note the route number 200 which is for a new-ish sightseeing service route associated with and marketed with the "Hunderter".

Yes. It's a proper bus, part of the city's transport network and not a "tour", and the fares are standard for any service in the city. It has no commentary, but the leaflet has a very informative map.

Progress At A National Level
Readers will remember that fbb rushed out (?) to purchase a plastic model bus kit from Peco's Modelscene range. A correspondent infromed him that the kits was once in the Tower models range. 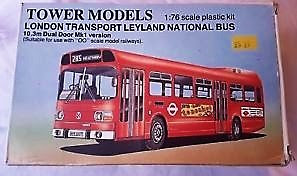 The bus will be gifted to Archie and Georgina, the Fearnley flock, using their skills to assemble the model. fbb felt that encouraging the youngsters to do the painting might not go down too well with mummy and daddy; so he would pre-paint the bits.

... just like Peco's own illustration, it would be sensible (knowing the old man's stubby fingered shaky hand (in)expertise) to model an all-red version. Humbrol's gloss red is a close match to LT's colour ... 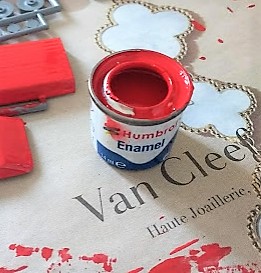 ... so work duly began. The mouldings are in a dark grey plastic ... 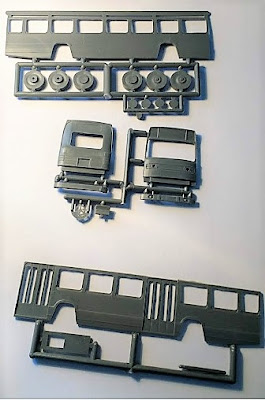 ... which made the red look somewhat dull in places. 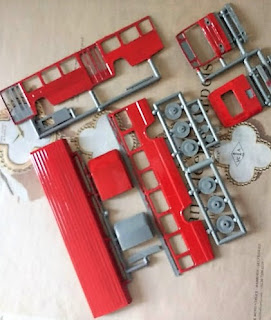 A second coat (seen below in the process of coating) ... ... did the trick. Or it could have been all-over green. 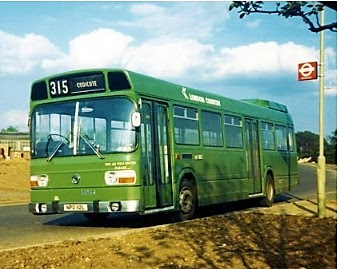 Painting the seats, however, was really, really fiddly.

The extra bits allow you to choose your seating configuration - standee with two singles and various other combinations including for bus models with only a single door. The spare seats will end up on Peterville Station platform!

West Midlands PTE Revived
In one of those unsolicited twits that drop occasionally into fbb's flap top, was an intriguing picture.

On closer inspection it was carrying a version of the good-old West Midlands PTE livery and logos. 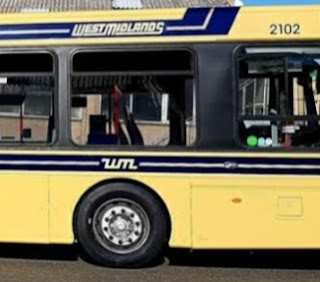 The bus looked shiny and splendiferous ... 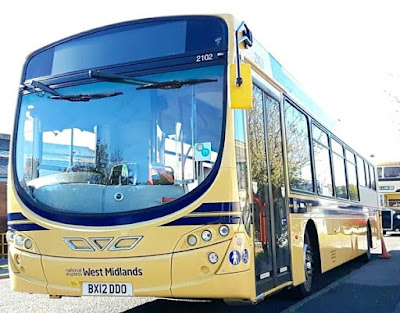 ... and had a National Express logo on the front.

This gorgeous heritage livery has been applied to a very ordinary single decker that used to be clad in red and (off?) white. 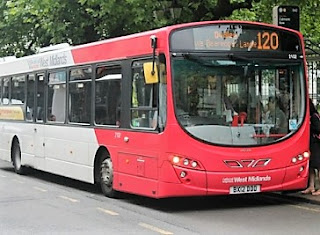 Poor old fbb cannot remember when the particular "blue stripe" heritage livery used on BX12 DDO appeared, and in what context. In his oft-befuddled mind single deckers always looked like this ... 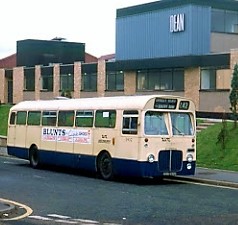 ... the uninspiring style applied to the large quantities of SD buses absorbed with the take-over of a huge chunk of Midland Red. 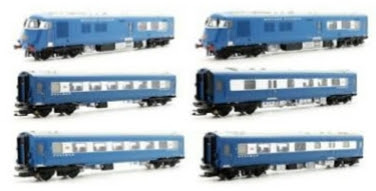 Next weekender blog : Sunday 28th October
Posted by fatbusbloke at 02:00