After dallying unsuccessfully with trams, trolleybuses and guided buses, Leeds City Council remained keen to do something about congestion, air quality and public transport. Sensibly, all along, First Bus has campaigned for "the money" to be spent of convention buses as they will be good for the whole city rather than one or two prestige routes (Bristol, take note!).

"Leeds City" is the outcome. Similar to Glasgow, it involves First investing is new technology for the buses and the City will "invest" in better infrastructure. 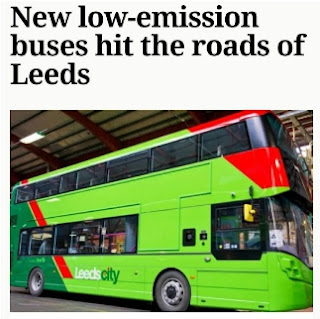 The initial outcome is new buses in a new livery on Routes 1 and 6 to Holt Park.

These busy routes serve suburbs to the north of the city passing the University and Headingley on the way. 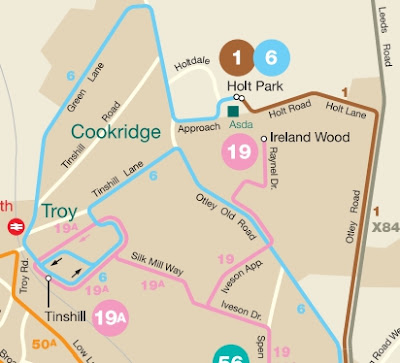 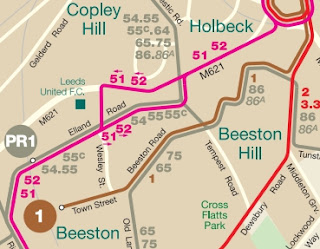 ... passing Leeds City railway station on the way. Sadly one one wasn't passing when Streetview bimbled by. 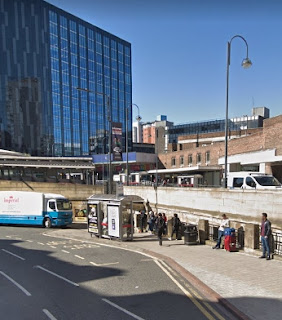 The new X26 has also gained new vehicles. This time with a yellow wedge. 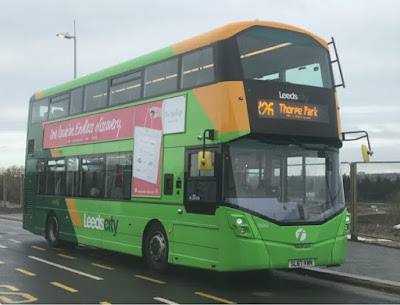 Correspondent Roger was anxious to obtain a timetable but found none on the buses. 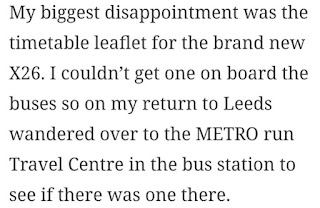 His trip to the bus station (NOT served by the X26) revealed a well-stocked rack ... 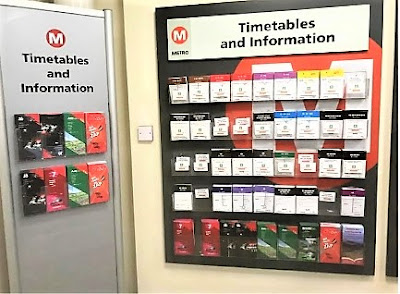 That was on a side panel of "New Timetables" which, by the time Roger appeared, were not exactly "new". 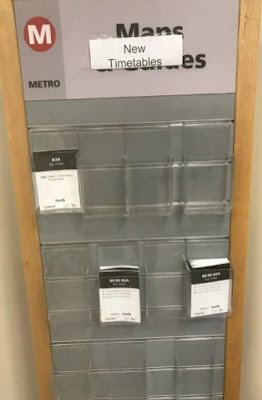 There, the X26, with its brand new buses going "fast" to a brand new and exciting destination (?), hasdthe cheap and nasty version of the "Metro" (PTE) leaflet ... 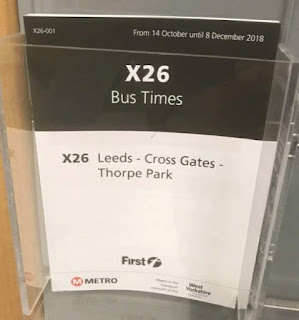 ... without even a yellow splodge to match the buses. Also in the general racks were leaflets for Harrogate Buses 36 and 7**, Yorkshire Coastliner's "Zap" and Keighley buses "Aireline 60"** ... 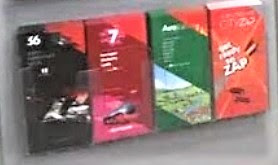 ... all bright and attractive and a helpful ⅓ A4 size rather than Metro's small and utterly boring.

The Aireline, in particular, has some imaginative and "watery" slogans within its timetable pages. 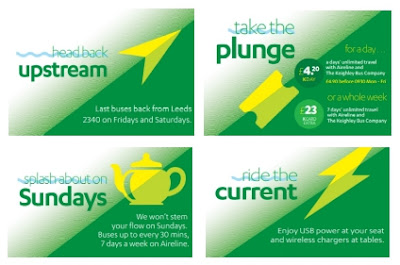 fbb agrees with Roger's view, expressed in  his reminiscences of his on-site view, that First needs to start producing its own publicity if the company is serious about promoting its bus services. Roger also adds:- 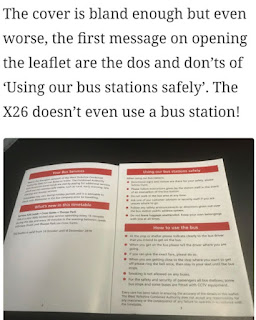 ** Harrogate buses 7 and Aireline 60 may confuse the unwary. Harrogate Bus company (formery Harrogate and District) has renumbered its long-standing route via Wetherby from 770 to 6 (not 7? fbb would have used 6 for the 36 which retains its "traditional" number). Likewise the former Keighley and District 660 loses 600.

All We Need Now Is To Find Our Stop!
Or ... at which stops does the limited stop stop?

First Bus publicity (poor) tells you nothing - even the timetable is evasive with a time point at "Crossgates" - where in Crossgates, there are several stops to choose from? 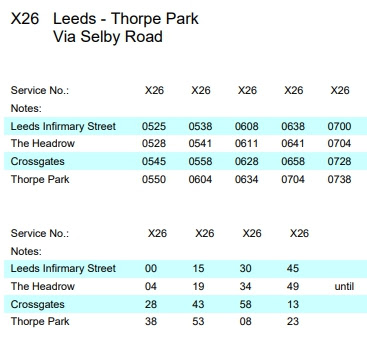 Equally, where in Thorpe Park? It is a big place. Surely the terminus is at "The Springs" shopping mall?

... at Crossgates but a little worse in the city centre. And no mention of intermediate stops, certainly not on the on-line version.

The minimalist PTE leaflet does, however, give a route ...

... with FIVE references to the A64, but no mention of actual stop names or locations.

We have to turn to Traveline's "all stops" timetable for the answer (click on the table for an enlargement). 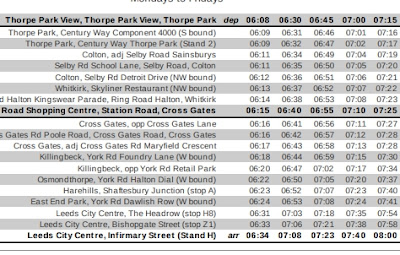 Then, as Traveline is now nationally mapless, fbb had to delve into Google Maps and poke at the many bus stop symbols to find out where these places were for real.

It would appear, to a non Leodensian, that the X26 calls at all stops between The Springs and the A64 (green and yellow dual carriageway junction top left) ... 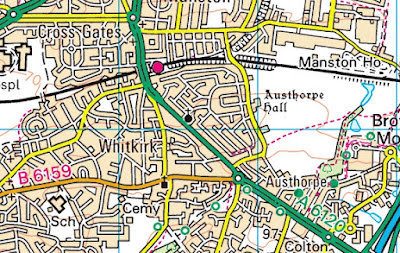 ... thereafter limited stop along the York Road (A64) with just two stops in the city itself. 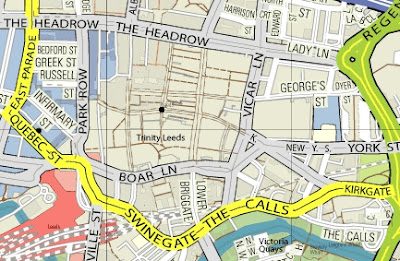 These are here on the Headrow ... 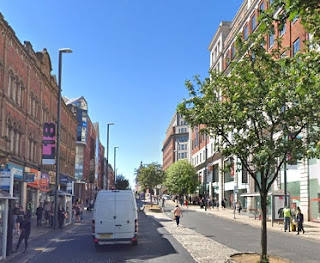 ... near the Briggate/New Briggate crossroads; and here ... 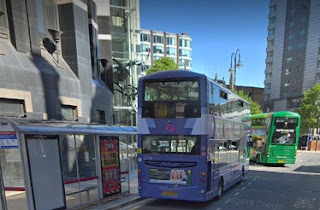 ... on Infirmary Street within nipping distance of City railway station.

Neither the operator nor the PTE makes is easy to find this bus; lets hope the locals can guess with less stress than fbb.

And The Fare To The Springs?

Nothing except the usual exhortation to buy a day ticket (cheaper on the App, of course). There even is no guide as to whether £4.30 is cheaper than two singles. And there is not much point in emailing First as it takes them 14 days to reply!

But fbb will try. Results in a couple of weeks?

No he won't try any more. Having given his life's history, home address, hobbies, political party membership, inside leg trouser size, name of pet cat and an assurance that he is not a terrorist or a robot, it would appear that the email never left his confuser for one of a long list of errors/inadequacies on fbb's part.

It was far too stressful.

All to ask for a fare.

P.S. Despite telling fbb he hadn't complied with all the instructions, the e-mail did find its way to First Leeds. El chubbo awaits a response ...

... after the usual feeble "holding" reply.

For the record, fbb has never received ANY reply from ANY First Bus company in response to a fares query.


Next Stuttgart blog : Thursday 25th October
Posted by fatbusbloke at 02:00