Thanks to a correspondent who commented on Tuesday's blog re the next routes to gain new colour codes buses. 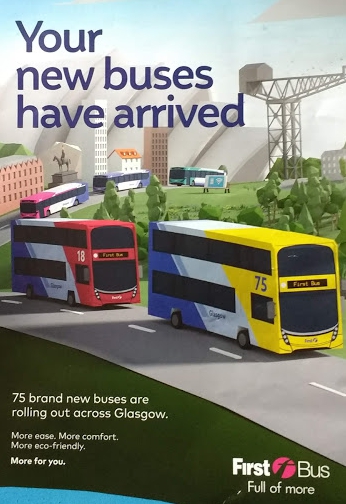 fbb's brave attempt to read the route numvers on the three single decks on the flyer are, indeed, confirmed as correct by the fake bar code on the back of the giant bus-enfolding box. 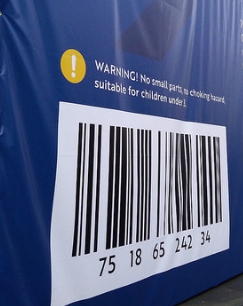 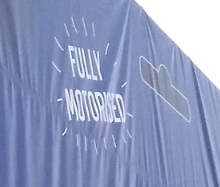 fbb understand that the box has been folded up and tucked away in a corner of the depot and will be brought out to hold the next 1:1 new-liveried vehicles, possibly in suitable suburban locations.

Now what about your map? 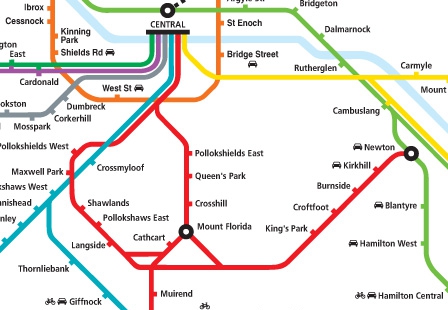 It is on the non-circling Cathcart Circle routes from Glasgow Central and has an uneven 30 minute frequency; fbb rode to Newton and on to Motherwell via Hamilton. But he has not yet been that way by bus.

The early "Overground" map was a huge simplification of the network ... 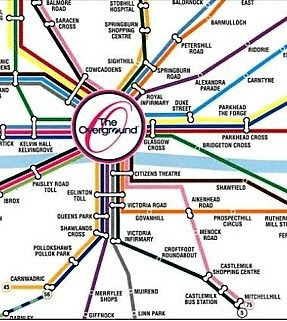 ... with services 5 and 75 joining at Castlemilk and continuing as a straight like to Mitchellhill. It also shows a Bus Station ... 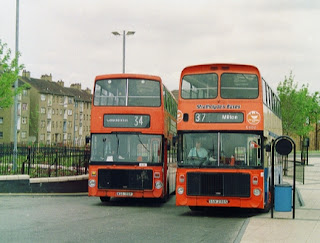 ... which doesn't seem to exist any more.

But a later diagram (still Overground) has the 34 from Govan added with the 5 and 75 looping ... 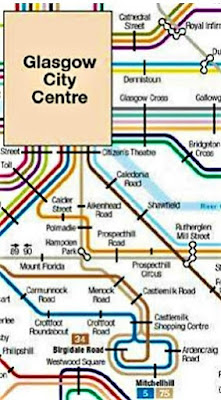 ... and all terminating in Birgidale Road. 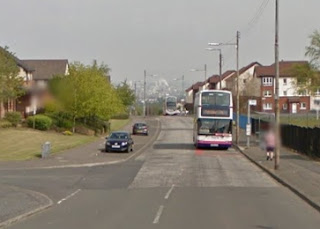 There is a layby beyond the bus pictured above where the 34 could have turned round. The routes today carry the same numbers but their terminal arrangements are different. 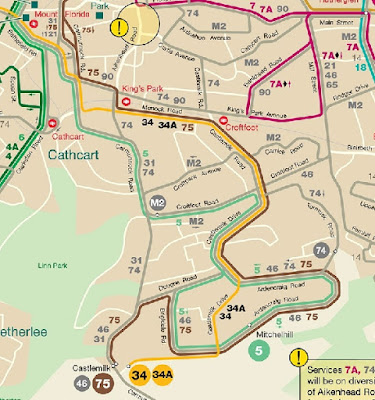 The 34 (plus 34A) and the 75 have proper "turn round and go back" termini at the junction with the Carmunnock Road. 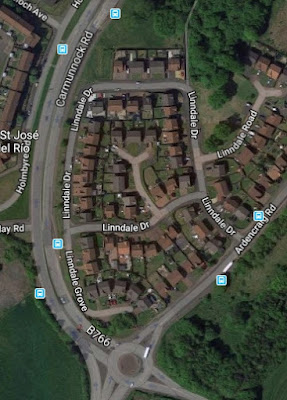 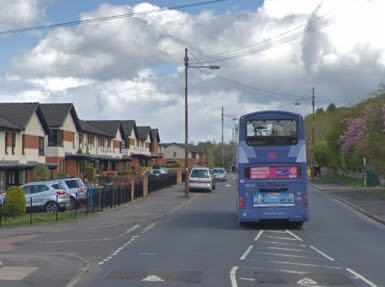 ... and there is no obvious terminal point visible on the ground (c/o Streetview) at "Mitchellhill".

So, keeping the on-line geographical map in mind, let us look at the simplified version as provided on the new-ish promo leaflet. 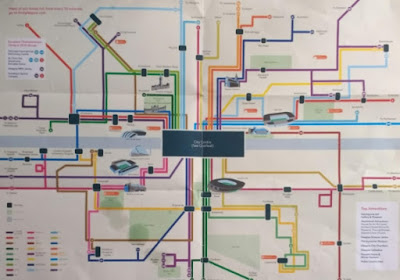 Here are Croftfoot and Castlemilk, enraged. 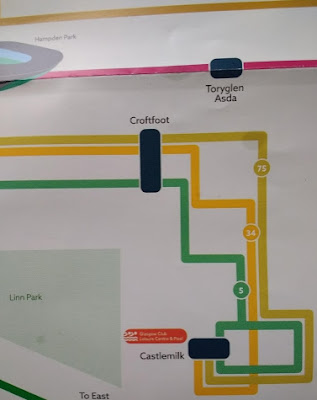 It is certainly a simplification but it is equally wrong in several obvious ways.

The implication is that 5, 34/34A and 75 all serve Croftfoot, shown by one big blob; which begs the question, "Where is Croftfoot"?

It was a "steading" (small farm) located by the greenery between "Woodside" and the Historic site of Castlemilk. 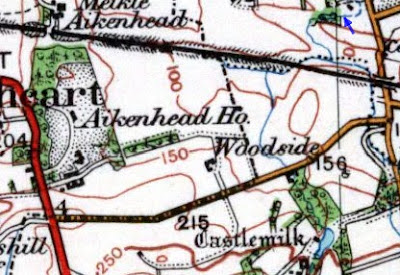 The post WW2 estate fills the whole of the area between the "brown" Croftfoot Road, the "red" Carmunnock Road and the railway. 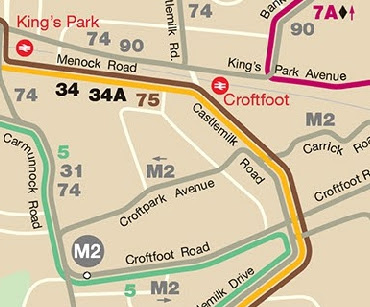 What is crystal clear is that the 5 serves a different chunk of Croftfoot from the 75/34/34A; they shouldn't be shown as the same "blob".

The shops at Croftfoot are located at the junction of the Croftfoot Road and Carmunnock Road ... 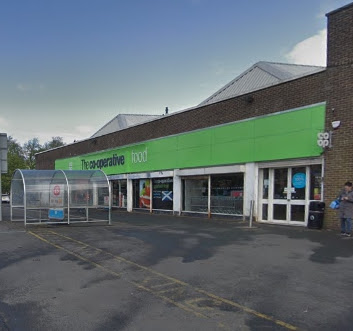 ... but it's hardly the obvious centre of the estate.

Then at Castlemilk itself, the new-ish map is quite wrong. 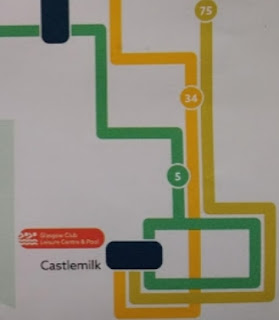 It appears to show all three routes as terminating somewhere round the loop - which they don't. Castlemilk (i.e. the Shopping Centre) is BEFORE the loop - as shown in the second manifestation of the "Overground" map.

(Sorry about the poor quality of the map extract above).

Not only that, but the "sports" location is just across the road from the self-same shopping centre ... 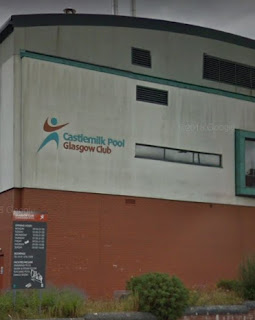 ... and nowhere near the terminus of any of the routes.

Which leaves us with a compelling question. Is this recent First Bus map as helpful as it could be?

Would it do a better job if it were a bit more accurate? 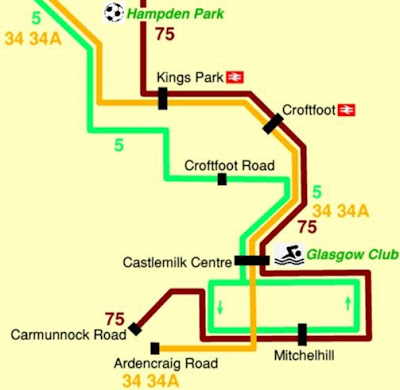 Incidentally, fbb is fully aware that the 75 and 34/34A do not actually pass Croftfoot Station; you have to take a footpath (with no signposts) from Castlemilk Crescent (lower left). 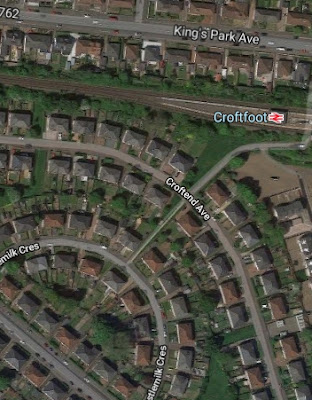 fbb would use the code for the BR logo as "at or near" a railway station on a finished product. There is easier and signposted access from Kings Park Avenue, top right. 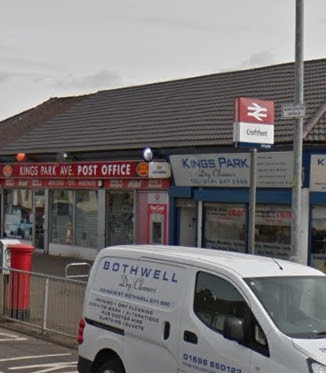 The station was opened in 1931, presumably to serve the burgeoning Croftfoot development, but it is very much on the northern edge and bus would be much better for most residents.

Maybe leave it off the map altogether?

For the record and as someone who has never travelled to the estates in question, fbb would find the  new-ish First Bus map difficult to use and, without additional research, would risk turning up at the wrong place.

The excellent geographical map is only available on-line - fbb has never found any printed versions - but that's another problem for First. The company has no enquiry office in Glasgow and the only PTE enquiry facilities are at Buchanan and East Kilbride bus stations.

Let's hope the company managed something better as it improves its colour coded PR efforts!