fbb was amused to watch the second episode of the Great Model Railway challenge - not for the railway modelling because, yet again, there was very little to see; but to remind him of the "prize draw" that accompanies the series. 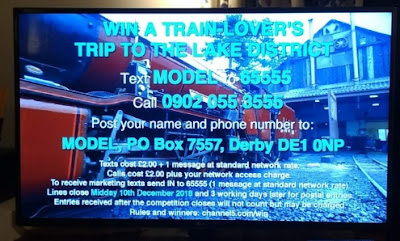 The draw involved sending an expensive text or an expensive phone call giving you the chance to wing a short break in the lake district. The voice-over revealed that you would spend time on the  ...

... which, of course, should have been ESKDALE.

fbb did not enter!

Tram Train Timetable Travesty
The much delayed and over-priced Tram Train "experiment" swings into action on October 25th. Publicity is now being distributed. There is a general "launch" leaflet ... 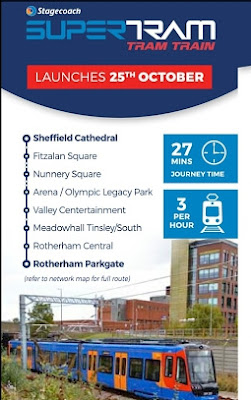 ... which includes a simple statement of frequency ... 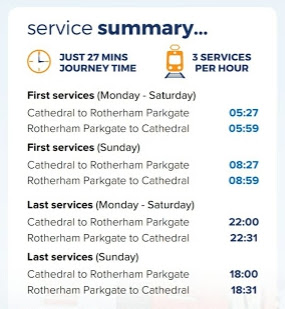 ... a less than helpful route diagram.

fbb reckons that a little more geographical acquiescence would have been possible. The diagram shows that tram trains follow the yellow route from Cathedral to Meadowhall South Tinsley and then zap off the Rotherham. 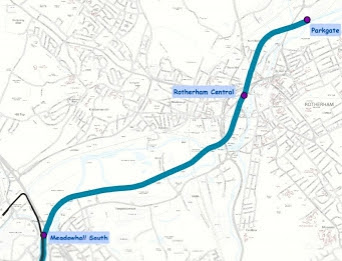 It is quite a long zap without stops and hiding inaccessibly behind the former steelworks on the main road.

The tram continues on its own track but paralleling the former Great Central line (now singled) ... 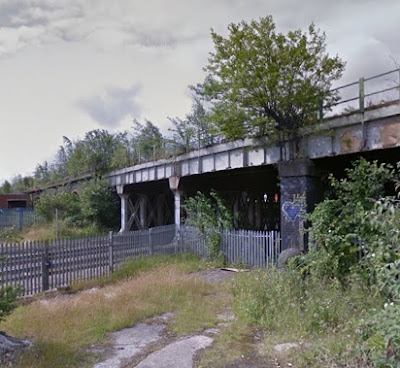 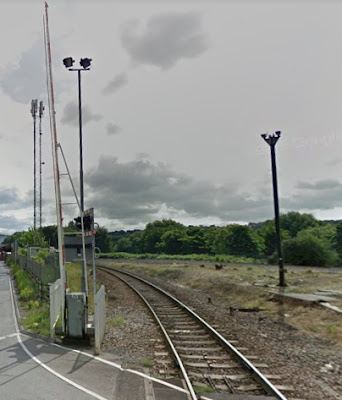 But the actual timetable disappoints. The separate leaflet is swish ...

... but the timetable isn't. We were warned well in advance that it would not be an "even" twenty minute frequency due to pathing problems to make way for real trains at Rotherham Central, but we didn't expect it to be as odd-ball as this. 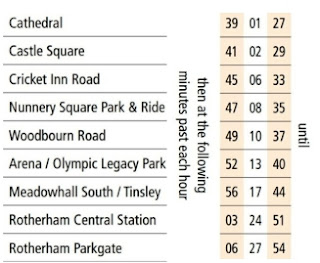 The imbalance is worse in the other direction. But, by way of compensation, the Sunday timetable is also three trams an hour. 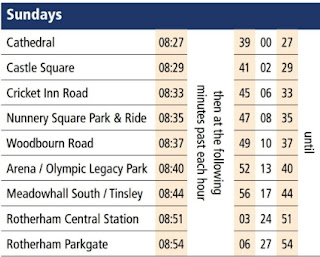 But this is not the beneficence that it might seem. Hitherto, on Sundays, the purple tram (from Herdings to City) has added frequency by running through to Meadowhall every 20 minutes.

From 25th, this extra frequency will be provided by the team train and not the tram purple, except it doesn't go to Meadowhall! So we will have extra trams where no one wants to go and less trams to the one destination that folk want.

Customers from Rotherham to Meadowhwall will always have to change to at Meadowhall South.

Buses from Sheffield to Rotherham bus station (when it re-opens) take 32/33 minutes. The tram train takes 23 minutes to Rotherham Central railway station - not quite so central as the bus station.

Tram watchers do not expect a howling success for the line, but time will tell.

Avon Abdicates
Avon Buses started operations in 1981 (as Avon Minis) and grey to operate mainly tendered services in Merseyside and on the Wirrall.

The business grew, partly by absorbing services when other operators gave them up.

Things were grim a year ago ...

2017 saw Avon expand operations in the Liverpool area but a driver and vehicle shortage led to many service cancellations and the company at late June 2017 was in a state of crisis with most Merseytravel tendered and commercial services not running. However the crisis appeared to have been resolved by the end of June with most scheduled services running, but during July services were regularly cancelled again. Late August 2017 saw the company's fortunes improve.

... but the company appeared to survive. But then, just over a week ago ...

Drivers and workers were told on October 5 2018 that the firm was to cease trading immediately. Issues cited for the closure included rising insurance and fuel costs, and Merseytravel's MyTicket, a youth ticket that provided unlimited travel for £2 a day. The use of MyTicket led cash-bought tickets on buses to decrease. Following the closure, Arriva North West would provide limited services for services 10A, 18, 122, and 83. 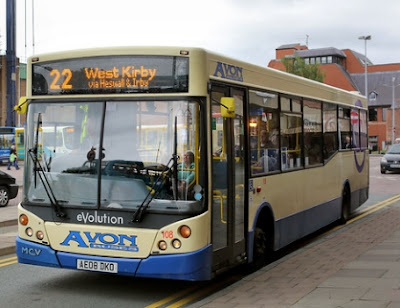 The company blames MyTicket for its collapse. 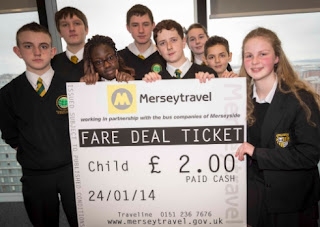 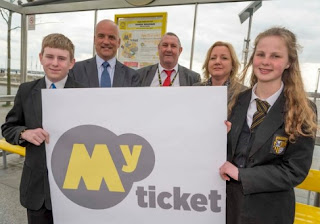 We know that the cost of travel to school or college, going out with friends, shopping or to part time jobs is a huge issue for young people and now we can offer all day bus travel for just £2.20.

You simply ask the bus driver for MyTicket and you can make as many journeys as you like on any of the participating bus operators' services.

And now, apparently, less buses! The ticket was introduced four years ago ... 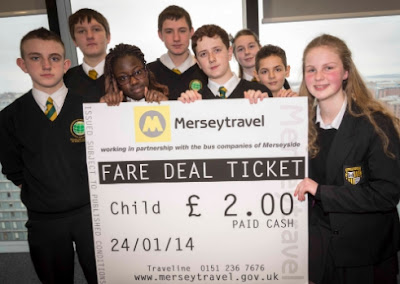 ... when it cost £2. Importantly (and terminally according to Avon) it extended child fare to age 18. 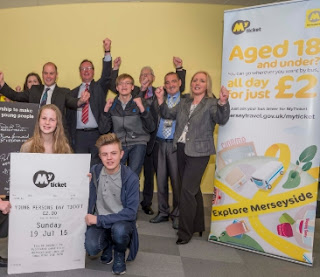 But was this really Avon's problem. The "troubles" of 2017 would suggest there were deeper financial concerns in recent months. Anyway, you would have thought that the company would identify its MyTicket problem sooner that nearly five years after the scheme started.

It is always sad to see a bus company go under but it would appear that running buses is getting harder year by year.

Avon will not be the last to succumb.

I Can See Clearly Now
Thanks for the song Johnny Nash, written, we are (not) told, after a visit to one of England's most northerly stations. 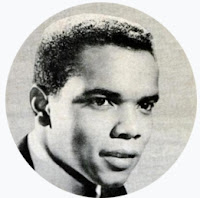 Oh, yes I can make it now the traain is gone
All of the bad feelings have disappeared
Here is that Carlisle I've been praying for
It's gonna be a bright (bright)
Bright (bright) sunshiny day

Once bedecked in grime and gloom, the magnificent Carlisle Station has not looked its best. 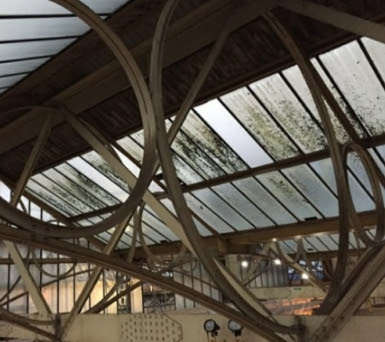 Recent times have seen that station a huge forest of scaffolding ... 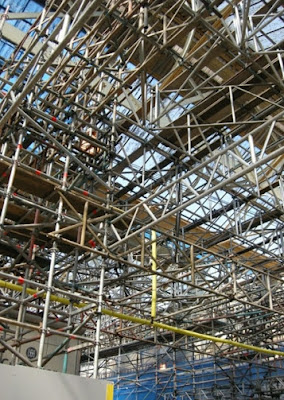 ... as the glazing was replaced and the roof supports cleaned.

The results have exposed this magnificent cathedral of railway magnificence ... 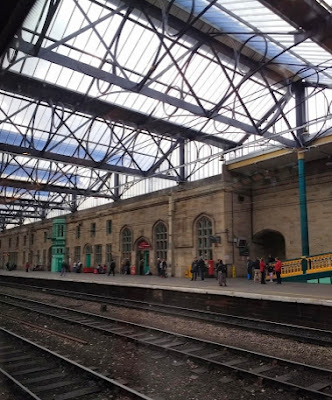 ... and turned it into something very special. to enjoy. fbb was well impressed as he passed through north- and South-bound on his recent Scotland holiday.

Well worth a few moments.

Tomorrow, to Glasgow, for some jelly beans.