fbb penned (typed?) a couple of blogs as plans were revealed confirming the start of the Fast Link project in May 2015. (here) and (here). 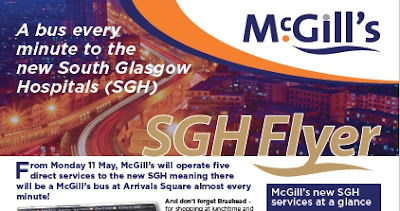 It was announced that McGill's would operated a service F1 to the Southern General Hospital to complement their other routes running thataway.

But fbb was not going to find an F1 at the Hospital. By December 2016 Stagecoach's X19 had appeared. Their former route from Easterhouse into the city had been extended to the Hospital.

Readers may be able to fill in fbb's gaps but the Fast Link project has had a tortuous gestation. Here is a map from a report by Halcrow extolling the virtues of TWO fast link bus services running "mostly on bus only roads" that would be the fore-runner of a brand new (and exciting?) era in public transport for the City. 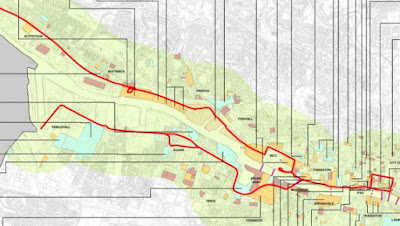 Next to be published was a map of the first stage. 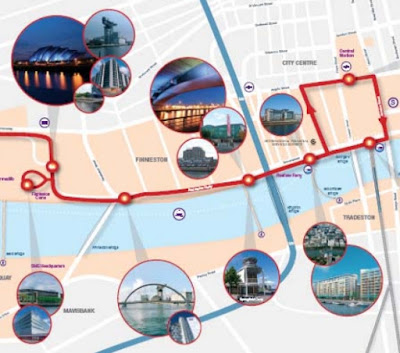 It would start from Central Station (Heelaman's Umbrella) and run via the north bank of the Clyde to the Scottish Exhibition Centre (SEC), then on to the Transport Museum (sort-of) and ... 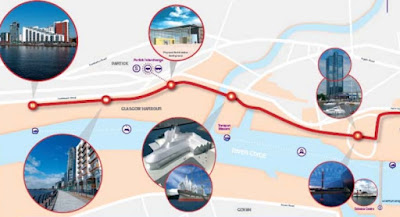 ... Partick Station with a terminus at "Eastern Terminus", wherever that might have been.

But, no - the next reveal was for a southern route ... 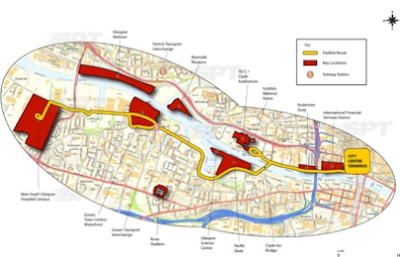 ... with a short "double run" to the SEC before nipping across the Clyde Arc Bridge and terminating at the Southern General Hospital. 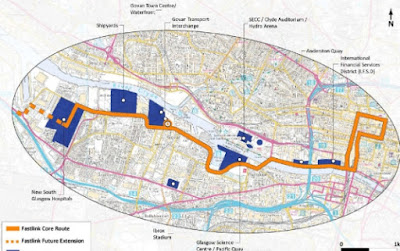 ... would start from Buchanan Street bus station (sort of), call at Queen Street Station (sort of), abandon the SEC to bus 100 and the open top tours before whizzing along to the Hospital as before. 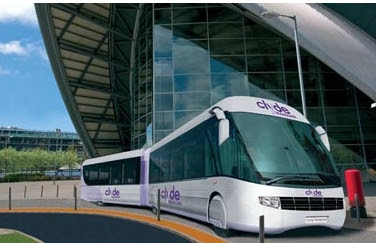 ... running along miles of bus only road. 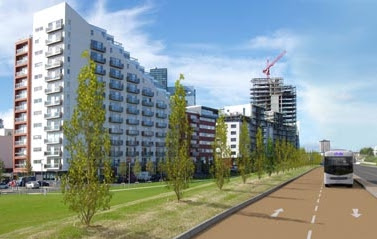 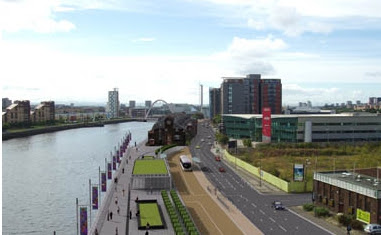 It certainly looked impressive! But McGills F1 was just a bus ...

... and, as fbb observed earlier in his "Scottish" week, the Stagecoach X19 vehicles were hardly super zappo "state of the art" like-a-tram vehicles. 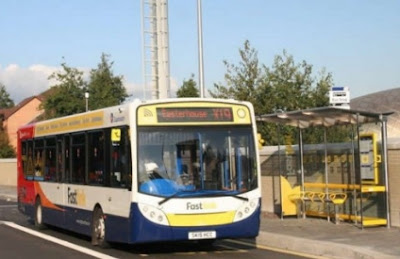 Just a bus, stopping at ordinary bus shelters with yellow bits stuck on. 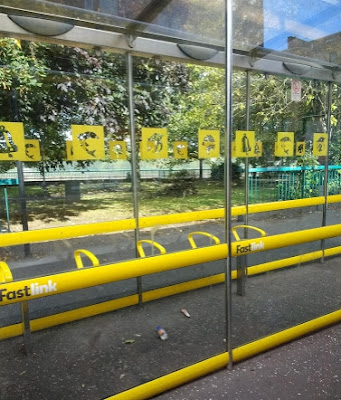 Oddly, ALL the shelters at the Hospital are branded Fast Link although only one service carries that exciting label. 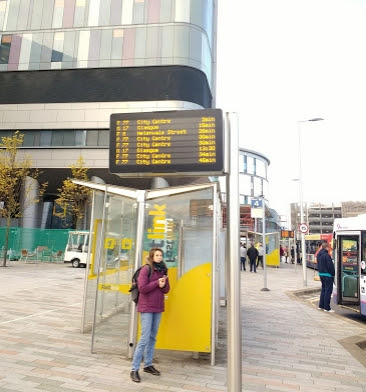 But at the Fast Link Fast Link stop, fbb let the 1255 depart in order to enjoy a good "observe". It picked up three passengers. 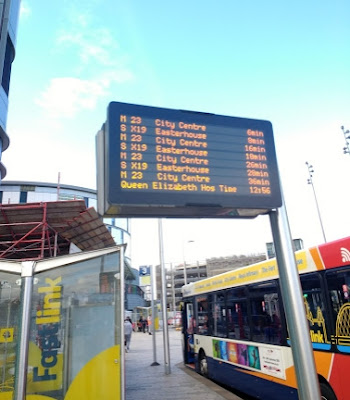 McGills 23 just runs to Glasgow centre three minutes in front of the X19. But fbb was ready, in omnibological anticipation, for the 1305 as it sat peacefully grazing in the layover layby. 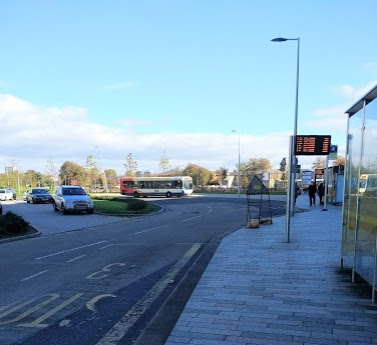 And there it sat until overtaken by the 1315.

And the driver came across to tell the waiting crowds that his bus had broken down. Of course not.

And the electronic screens showed "Cancelled" for the 1305. Daft idea.

Customers all piled on to the 23s leaving fbb as the lone passenger on the 1315 X19. But that allowed him a good view of the promised lavish bus only roads that would make this service truly pioneering, truly the bus service of the future. But the early part of the route was just as ordinary as the buses. 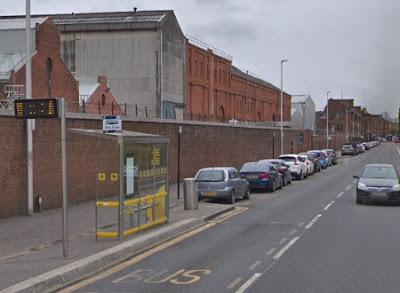 The first "special" section was past Govan Bus station. 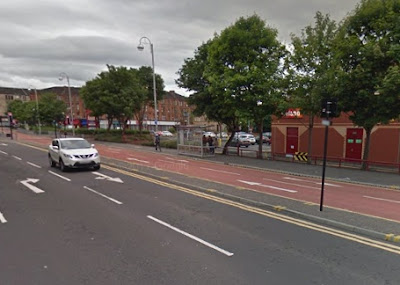 It is a two-way bus only road on one side of the main carriageway. This means that, at the beginning and end of these sections, buses have to be traffic-lighted across the outbound "normal" road and back again at the end of the bus-only bit.


McGills stopped using the bus lanes because they were too slow!

There are normal bus lanes along Govan Road, past the site of the once-huge shipyards, but then it is the inbound X19 that has to cross over ... 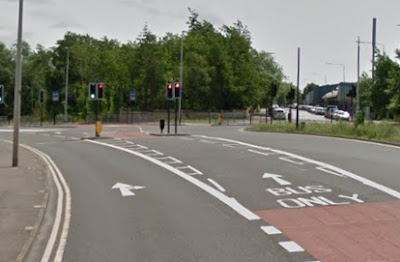 ... before joining a second section of bus only two-way lane on Pacific Drive. 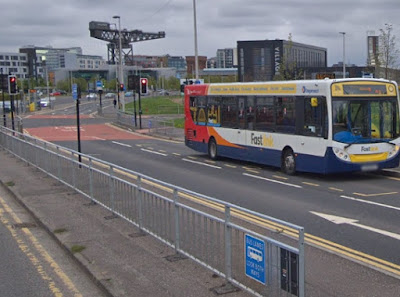 There are necessary warnings at obvious signalled crossing points. 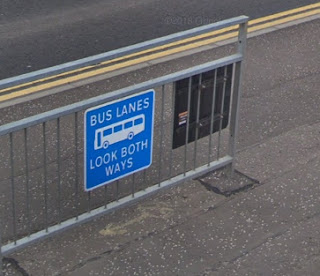 Pacific Drive is the newly build replacement for Govan Road ... 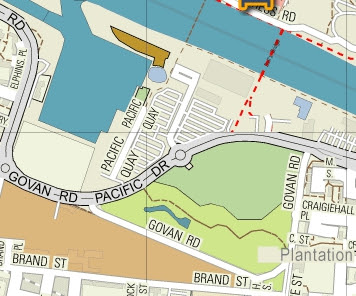 ... which ran round three of the four sides of Princes Dock, and was the site of the 1988 Glasgow Garden Festival ... 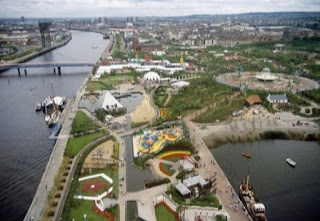 Then on to another "crossover" to a short inbound two way bus road over the Squinty, sorry Clyde Arc, Bridge ... 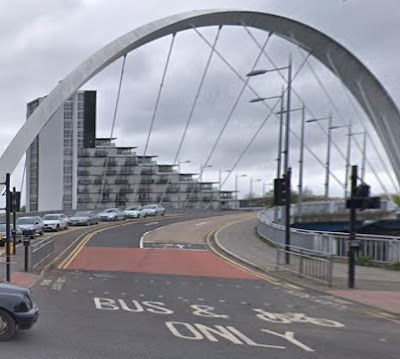 ... where X19s turn to their right (our left) to run along the former Clyde-side quays. What was a four lane dual carriageway bridge for all traffic has now become a two way road for occasional X19 buses and a two-way road for lots of normal traffic. What a waste of road space! 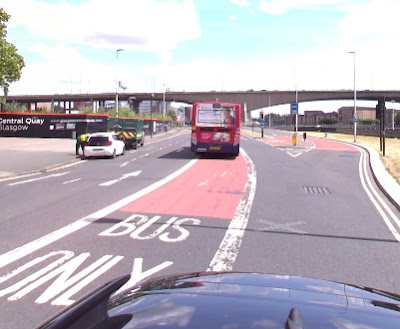 ... takes the X19s under the Kingston bridge along the Broomielaw before crossing back to normality and serving the city centre. 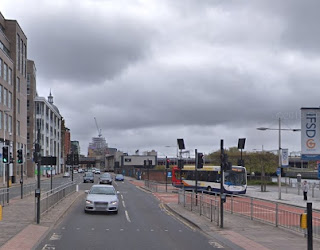 Promised "high quality infrastructure" in the centre had yet to materialise. From Broomielaw to Easterhouse, the X19 is a very normal bus route.

fbb thinks he counted EIGHT sets of lights to control entry and egress from the segregated sections. Too much faff!

What advantage do these very expensive bits of infrastructure have over normal "near side" bus lanes? Possibly the lights keep out other vehicles, but apart from that, the whole project seems ludicrously over-engineered for little benefit.

But then, like Bristol's Metro, it was designed by consultants on behalf of kudos-seeking politicians.

fbb did not experience things at peak time, but his lunchtime journey (and all the others that he passed) were very lightly loaded indeed. This was in stark contrast to his ride on First's route 77 via Partick which was pleasantly busy all the way. But then the 77 serves places where real people live!

You do wonder how long it will be before the X19 fades into transport obscurity "due to low er than expected passenger numbers"?

Tomorrow, a few oddments and then to Lancaster on Monday. fbb will also proffer his first impression on Channel 5's new Model Railway Build-Off programme of which the first episode aired yesterday.

And fbb will be sitting on the edge of his seat (or even behind the sofa) for the start of the new Dr Who series at 1845 tomorrow. 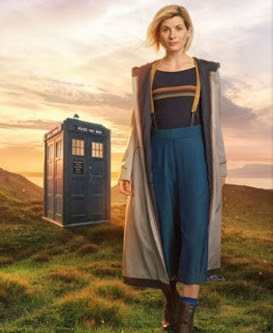 Next Charivari (?) blog : Sunday 7th October
Posted by fatbusbloke at 02:00