Stuttgart is the capital and largest city of the German state of Baden-Württemberg. Stuttgart is located on the Neckar river in a fertile valley known locally as the "Stuttgart Cauldron." It lies an hour from the Swabian Jura and the Black Forest. Its urban area has a population of 609,219, making it the sixth largest city in Germany. 2.7 million people live in the city's administrative region and another 5.3 million people in its metropolitan area, making it the fourth largest metropolitan area in Germany.

It is quite big, then. 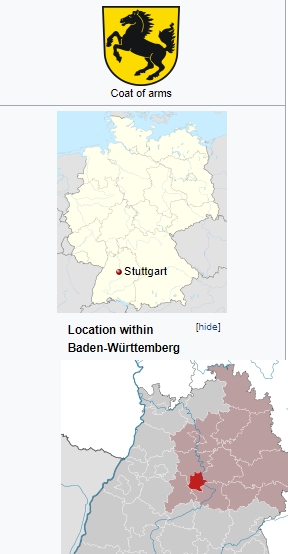 It was some time ago that a correspondent contacted fbb and suggested that it was worth a look - in particular that the authorities produced an excellent timetable book. At long last, fbb was beginning his researches when he noticed this ... 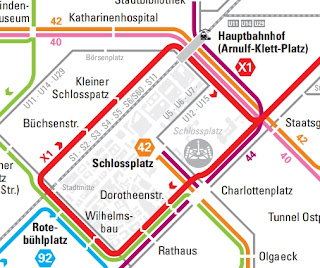 Route numbers with and X are not common in Europe and fbb was intrigued.

Firstly his investigations revealed that it was new, having started earlier this month.

Secondly, MOST of the information was in German which challenged fbb's linguistic abilities as his German studies concluded with a O level grade C about 60 years ago. 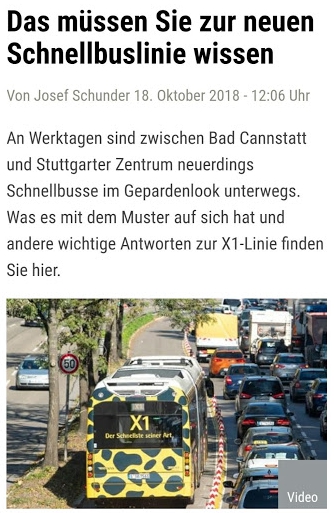 They are Schnellbusse (fast buses) im (in) Gepardenlook (cheetah livery) ... ... but electric buses are proposed to enter service from 2019. 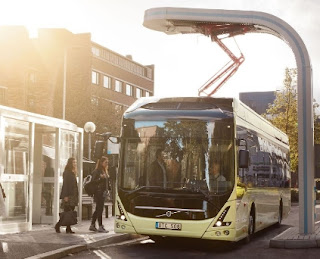 The map extract above show a city centre loop with an "outer terminus" at Bad Cannstatt ... 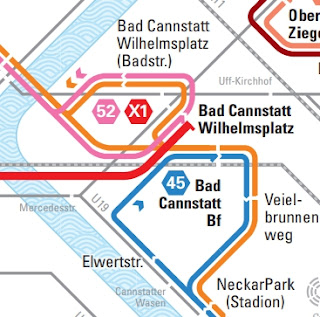 Bad Cannstatt, formerly just "Cannstatt" or "Kannstadt" (until 1900), is one of the outer stadtbezirke, or city districts, of Stuttgart. It is the oldest and most populous of Stuttgart's districts, and one of the most historically significant towns in the area of Stuttgart. The town is home to the Cannstatter Wasen and Cannstatter Volksfest beer festivals, the Mercedes-Benz Arena (VfB Stuttgart), the Hanns-Martin-Schleyer-Halle, and the Porsche-Arena.

So lets further our investigations there via Google Street view from the air! 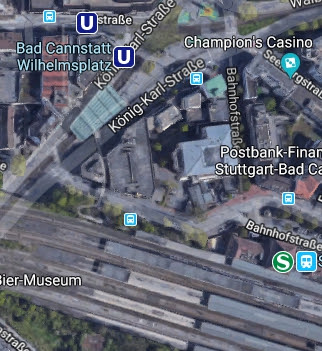 There is a "proper" railway station ( S  plus light blue train symbol - i.e. S-bahn or suburban railway). There are two  U  symbols (underground one might think) and a scattering of smaller blue "bus" symbols.

Here is the railway station ... 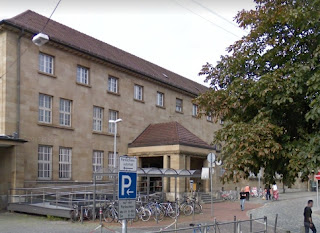 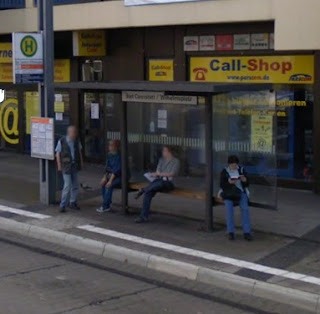 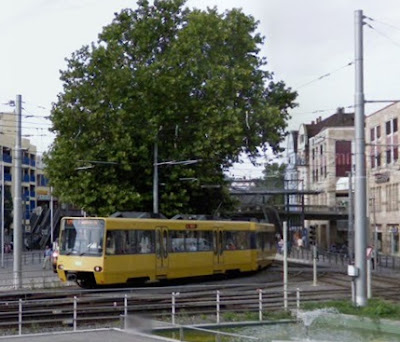 ... which is a junction station for several tram? metro? occasionally underground? light rail routes. fbb says "round the corner", but there is an escalator and raised walkway link between the bus, metro ... 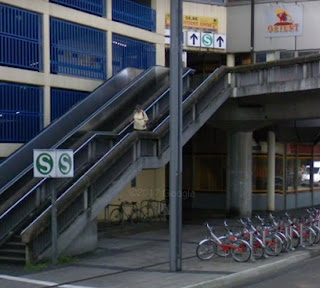 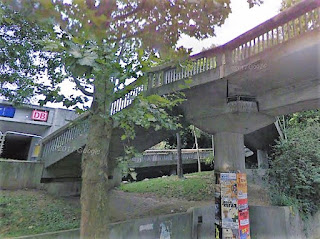 On the bus route map, as shown in extract above, the solid grey lines are "U" routes whilst the S-bahn is shown as dashed grey lines. And of course there is a separate map for U and S services of which more later.

Our X1 starts at Bad Cannstatt Wilhelmsplatz and runs non stop to the city centre.

Helpfully the bus route map shows stops as a white "gap" if they are served in both directions and an "arrow gap" on one way sections, as with our X1 in the city centre. 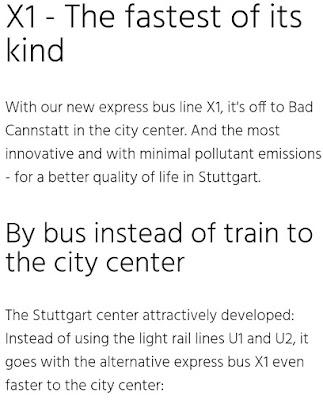 Of course, some web sites offer automatic translation (of dubious quality!) and the extract above tells us that the X1 is an alternative to using metro U1 or U2 and is actually faster than these "tram" routes.

It does seem rather odd for the SBB (Stuttgarter Straßenbahnen AG) to introduce a bus service that duplicates its tram routes and thus effectively competes with itself - but that is what it does.

The X1 runs every five minutes from 0600 (approx) to 2000, but on Mondays to Fridays only as per the paste-up timetable extract below. For those who are happier with real geography, the route runs from North East to South West ... 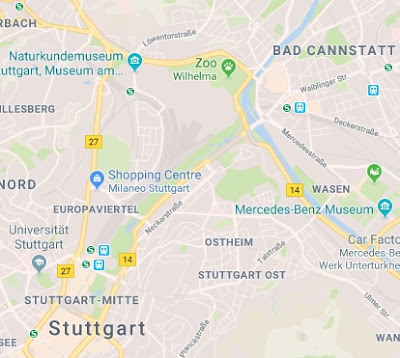 ... along road number 14 as matched by the geographical route map below. 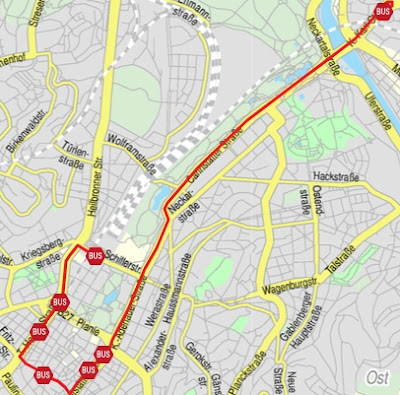 Having looped in the city centre, return is then non stop from the Hauptbahnhof (main station) back to Bad Cannstatt.

Tomorrow, fbb will take his excited readers on a ride on the X1 (courtesy of some screen shots from a YouTube video) and also try to gauge the reaction of the local press to this innovative (but very unusual?)  addition to Stuttgart's excellent public transport network.

Next Stuttgart blog : Friday 26th October
Posted by fatbusbloke at 02:00