Below is an attempt by fbb to describe the route of the new X1 bus service in Stuttgart. It starts at Wilhelmsplatz, Bad Cammstatt - one the most important and still the most populous suburb of the city. Thanks to Google Earth we can view the whole interchange ... 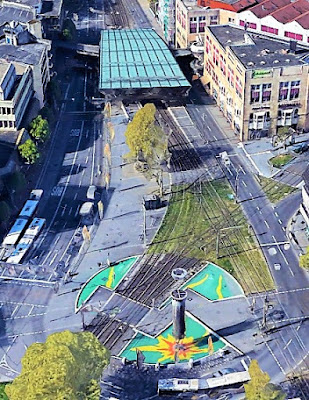 ... whilst noting that the Deutsche Bahn and S-bahn station is off-shot upper left. The bus first runs under the main lines. 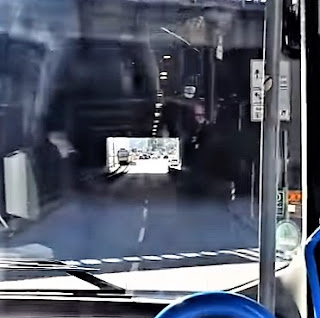 Here it shares roadspace alongside "tram" routes (still not sure what to call them!) U1 and U2. 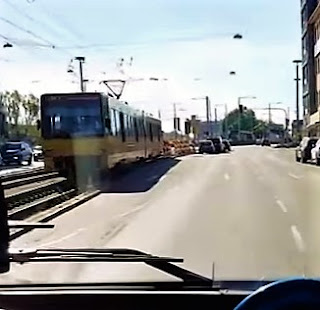 The bus is non-stop and thus whizzes past the first tram stop at Mercedesstrasse ... 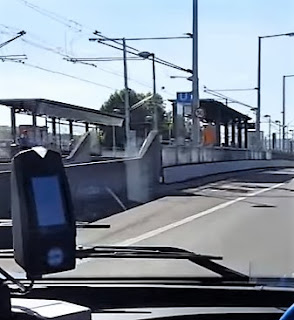 ... before crossing the River Neckar. Then the road plunges into tunnels ... 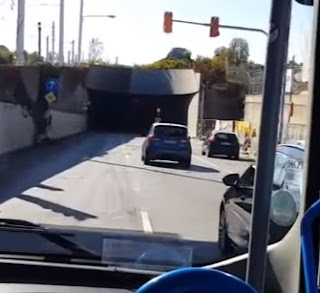 ... under part of what modern urban planners would call a "linear park". 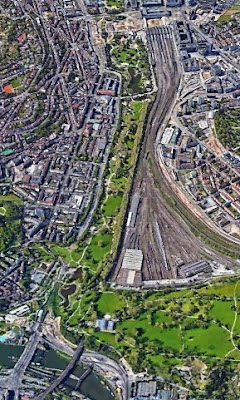 These are the grounds of a former royal palace. 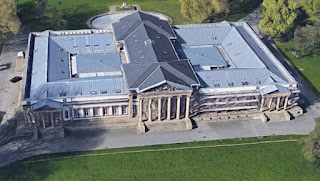 Rosenstein Castle (German: Schloss Rosenstein) was designed in the classical style by the architect and court builder Giovanni Salucci (1769–1845) as the summer palace for King Wilhelm I of Württemberg and was built between 1822 and 1830.

It now houses a museum and, in sop to republicanism, the Rosenstein Gardens are, in part, labelled "Unserer Scholsspark" (Our Castle Park) or "State Park".

After the tunnel, the X1 zooms alongside the edge of the park ... 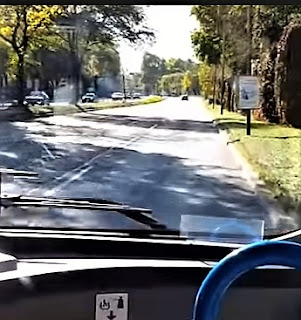 ... before it curves left to join the original road network at the Neckartor junction. 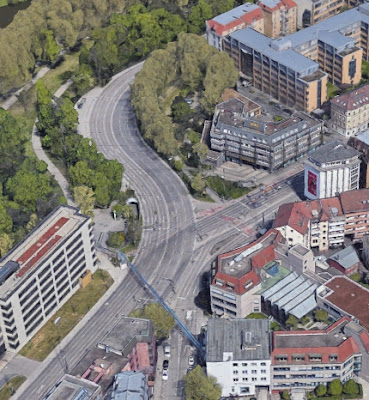 Neckartor? fbb guesses one of the ancient gates of the city. There are Neckartors in Tübingen and Heidelberg,

fbb presumes that Cannstatter Strasse, used by the X1, is, historically speaking, a new road as the "tram" routes follow the parallel Neckarstrasse with intermediate stops at Mineralbäder, (where the U14 joins) Metzstratsse and Stöckach (junction with U9 and U13). 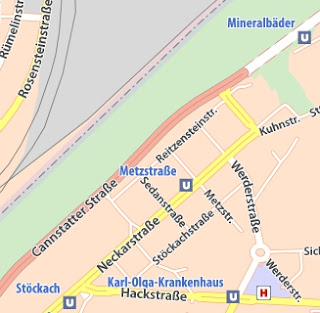 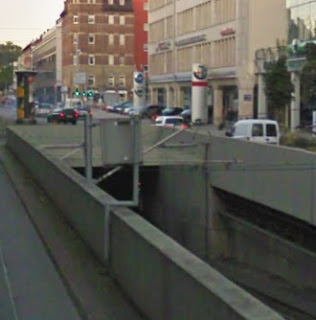 ... (cut and cover) for the remainder of its route into the city. The X1 ploughs on to complete its city centre loop ... 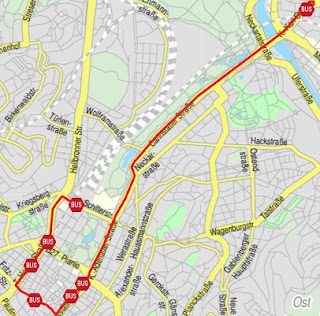 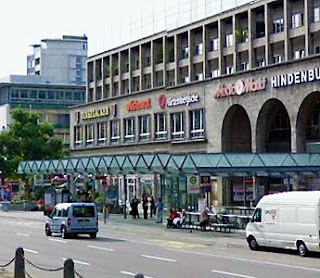 ... opposite the magnificent Hauptbahnhof. 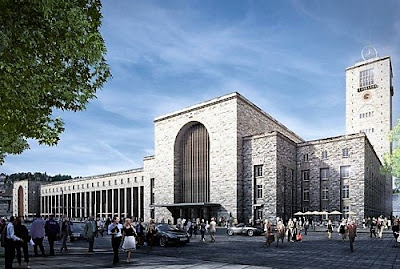 X1 Exposé
Similar to Bristol's M2 and Glasgow's FastLink, the local Stuttgart press was less than enthusiastic soon after its opening. 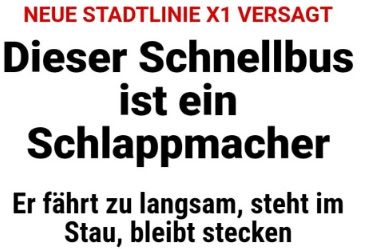 It goes too slowly; it's in a mess and it gets stuck.

To illustrate this, the article included pictures of serious three-bus bunching at the outer terminus ... 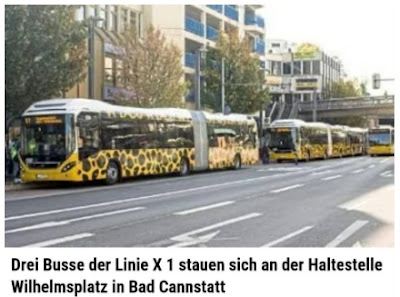 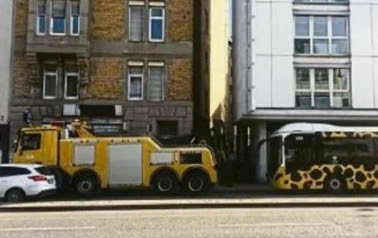 The author is not happy at all with this new venture. 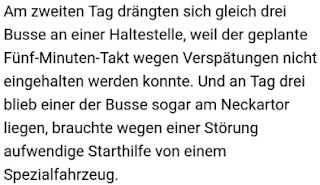 The busted bus needed some "Starthilfe" at the Neckartor stop! Perhaps it was a little unfair to focus on one breakdown as part of the overall condemnation?

But the most juicy word in the headline is ...
schlappmacher
... which has no direct or literal translation. Google Translate offers "limp maker" but an on-line dictionary has better guidance for the verb "schlappmachen".. 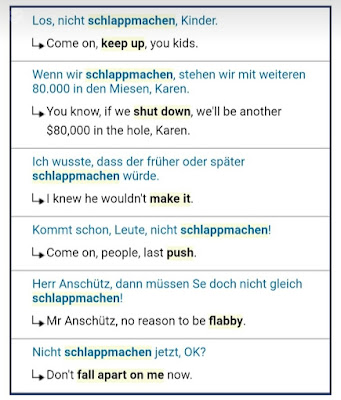 You get the idea. Lame duck? Damp squib?

One on-line picture shows a waiting time of 41 minutes ... 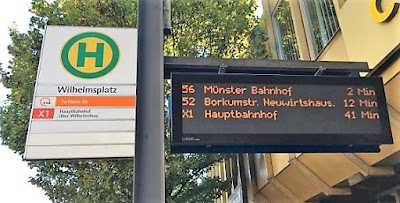 ... which, on a 5 minute frequency and a 30 minute round trip time, does not look good!

How much of this was first-days teething troubles and how much has now been resolved is not clear as the press is not very adept at reporting the good news of an improvement; BUT, it is clear that the journalistic view on start-up was that the service was a "Katastrophe Liebling".

More on Stuttgart next week.

But at about 1530 there was a coming together of a Tram Train vehicle and a flatbed lorry where the tram tracks cross Staniforth Road (B5200) at Attercliffe. 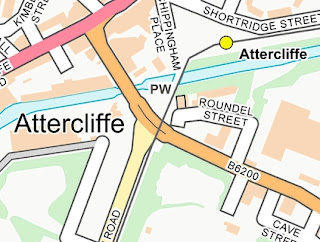 The main press picture of the accident was taken from Woodbourn Road ("Road" on the map above) looking towards properties on Roundel Street. 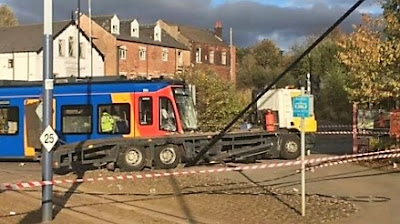 This is the Streetview view from a similar angle. 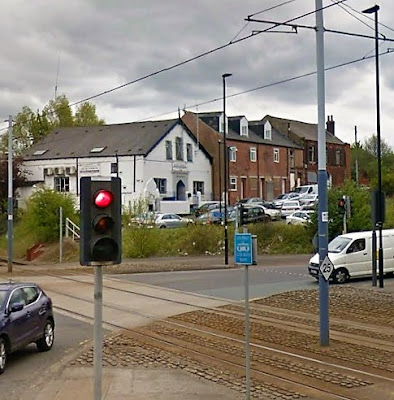 The impact was at low speed ... 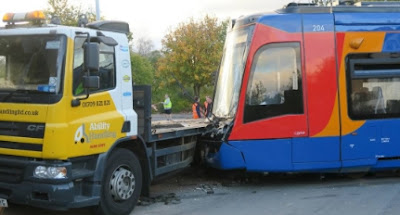 ... and damage to both vehicles appears relatively minor. 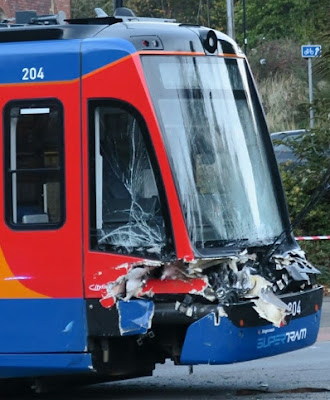 [thanks to Sheffield correspondent Roy for the two pictures above]

The local paper managed to get a lurid soundbite ...

... and the tram was derailed by several feet. 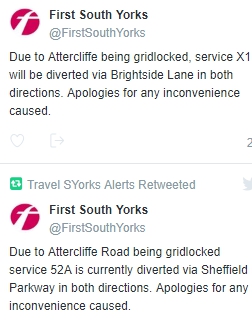 Sympathy is offered to any who were traumatised by the collision.

Which vehicle (tram or lorry) failed to negotiate the traffic light controlled junction correctly is currently a matter for pure speculation. 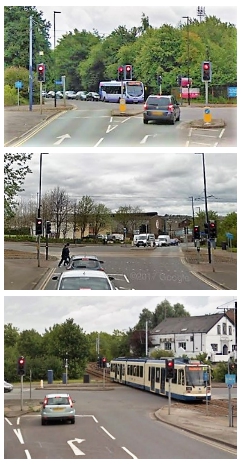